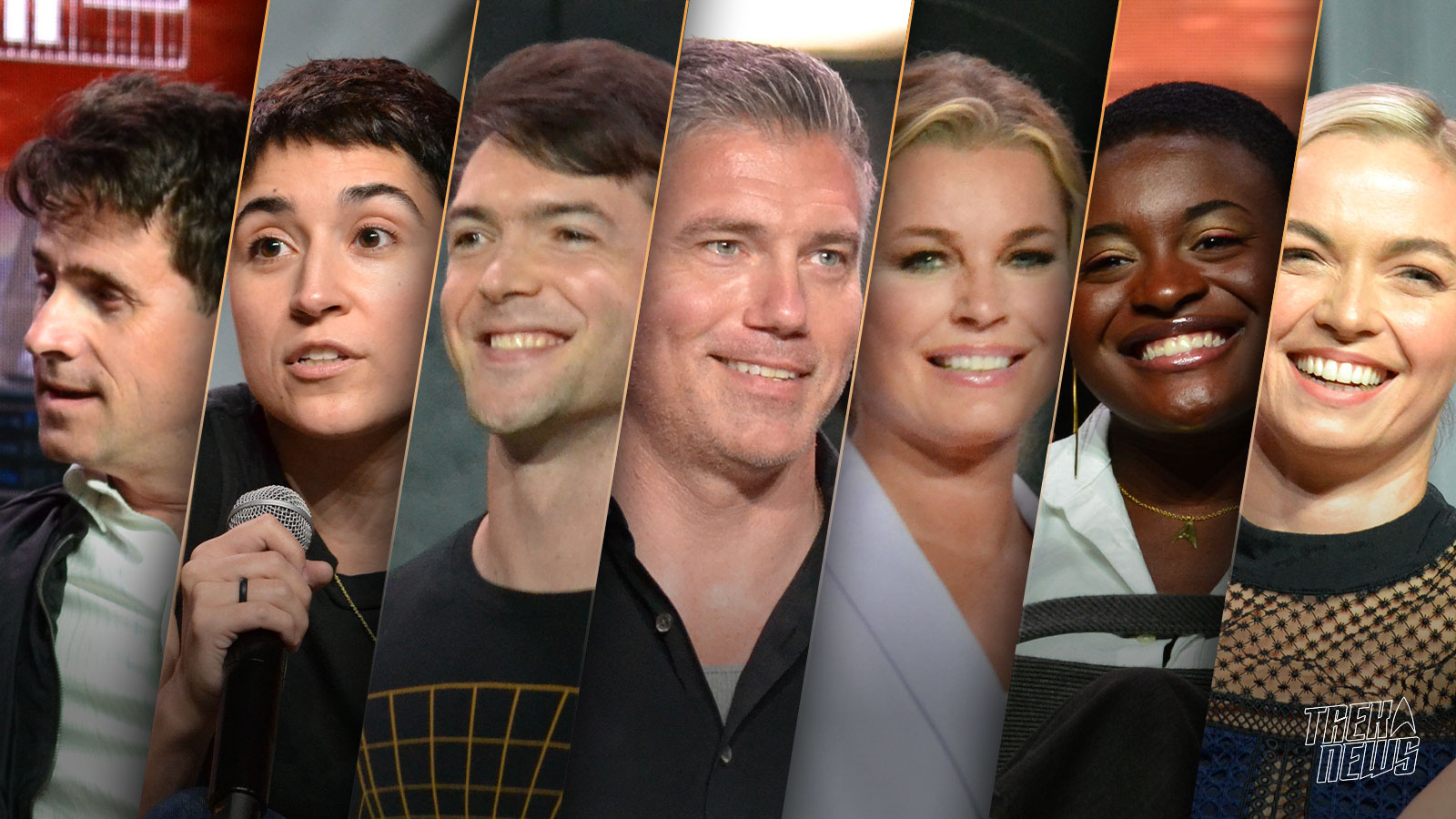 Members of the Star Trek: Strange New Worlds cast gathered for a panel discussion during the 56-Year Mission (formerly Star Trek Las Vegas) convention this weekend to talk the first season of the critically-acclaimed series, how they were cast for their roles, and hinted at what may be in store in season two.

First up was series lead Anson Mount, who plays Captain Christopher Pike. A role that was originally portrayed by actor Jeffrey Hunter in the first Star Trek pilot “The Cage” and in the flashback scenes from “The Menagerie”.

When asked if he looked to Hunter’s original performance as Pike, Mount disclosed that he had but acknowledged that his version of the character is in a much different place in his life, saying:

“I went back and I watched [The Original Series episodes] “The Cage” and “The Menagerie” but for me it [was] Pike in a completely different part of his life — so I didn’t take much from what Jeffrey did.”

Mount was asked about being cast as Pike on Discovery, where he first appeared in the second season premiere “Brother”.

“The cast was completely welcoming — especially [series lead] Sonequa [Martin-Green]. It was pretty smooth in that regard but it is weird coming on to [a series] where you’re the new guy.”

He went on to say that he didn’t know a spinoff series was in the works at first but did notice particular attention being paid to the Enterprise set.

“We did notice they were spending a lot money on the Enterprise bridge.”

He noted that it was Star Trek executive producer Alex Kurtzman who first told him they were going to get their own series.

When asked how it feels to be a Star Trek captain, Mount spoke with authenticity in his voice, saying:

“It’s so completely surreal and makes me feel so fortunate. Every day I wake up and and think ‘Wow, I’m on Star Trek,’ and not just on Star Trek… but a captain.”

Actress Rebecca Romijn was up next and initially touched on her upcoming CBS reality series The Real Love Boat — which she co-hosts with her husband (and Lower Decks voice actor) Jerry O’Connell. She went on to discuss playing Number One/Una Chin-Riley on Discovery and now on Strange New Worlds.

Discussing the role that was first played by Majel Barrett in the original Star Trek pilot, Romijn said:

“It starts with Majel — but I think there was only 13-minutes of screen time for Number One. In that episode we really only saw her performing the tasks at hand. She wasn’t really a fleshed out character. The opportunity to find the layers within that character was incredible. I took whatever I could from her performance… to infuse… but moving forward, we take our own artistic liberties and expand.”

In the third episode of the first season “Ghosts of Illyria“, it was revealed that Number One is a member of the genetically modified group the Illyrians. On genetic modification being outlawed, Romijn found similarities in her Strange New Worlds character and one she played in another popular franchise:

“Without revealing anything from season two, I don’t know how I can really speak to that. It will be expanded upon in the second season. I shouldn’t probably say this but I kept going back to when I played Mystique (in the X-Men film franchise) and it’s sort of connected. I had little bits of dialog in season two that were literally word-for-word things I’ve said in the X-Men series. They’re two characters that I relate to.”

Following Romijn, actor Ethan Peck discussed taking on the unenviable task of playing such an iconic character — one made famous by the legendary Leonard Nimoy.

“It’s an incredible, beautiful burden but a burden nonetheless.”

Asked how it feels to play Spock and if he feels the weight of it, Peck said:

“Ask me that in ten years. Right now it’s this thing that’s difficult to integrate into my reality. I’m just experiencing it and having the experiences that are written for me on the set. I’m really incredibly grateful for it.”

Celia Rose Gooding is the second actress to play Uhura in the Prime Timeline and she takes on that role made famous by the trailblazing Nichelle Nichols in The Original Series and the subsequent feature films.

Gooding divulged that she never had the opportunity to meet Nichols but has come to accept that fact, saying:

“I didn’t and it’s something I’m making my peace with. I’m very much a spiritual person and I know without a shadow of a doubt that we are so incredibly connected — I feel her presence everywhere, which is a gift. She gave so much of herself to this franchise and I’m just so happy to be a fraction of her legacy.”

Next up was Colombian-American actress Melissa Navia, who plays Erica Ortegas in the series. Navia appeared genuinely proud to be a member of the long-running franchise, saying:

“This is a dream role — to play the helmsman of the USS Enterprise… it doesn’t get better than that.”

Navia went on to talk about the audition process, saying it was all done through the video conferencing software Zoom, due to the global pandemic. Prior to knowing if she got the role or not, she said she found peace in whatever the outcome was but when she finally got the call saying that she was chosen to play Ortegas, her reaction was “OK, let’s do this!”

Following Melissa Navia was Australian actress and artist Jess Bush. She discussed the on-screen relationship between Nurse Chapel and Spock in the series but wouldn’t reveal if we’d see that relationship continue in season two. When asked about it, she said:

“No comment. Your guess is as good as mine.”

Discussing if she watched Majel Barrett’s performance as Nurse Chapel, Bush confirmed she had but has also tried to expand upon the foundation that was laid, saying:

“There was a distinct essence to [Majel Barrett’s] Chapel. There was a lot of room for development — her sarcastic, dry nature — so I pulled that to generate what she is now.”

Horak disclosed that Paramount was explicitly looking for a visually impaired actor to fill the role of Hemmer, saying:

“As a visually impaired man myself… the door was opened, and as a Star Trek fan… I leaped through.”

Horak, who also auditioned via Zoom, said the scene he auditioned with was the meeting between Hemmer and Shura. “Everything in that scene resonated with me,” Horak added.

The second season of Star Trek: Strange New Worlds is expected to debut on Paramount+ in early 2023.