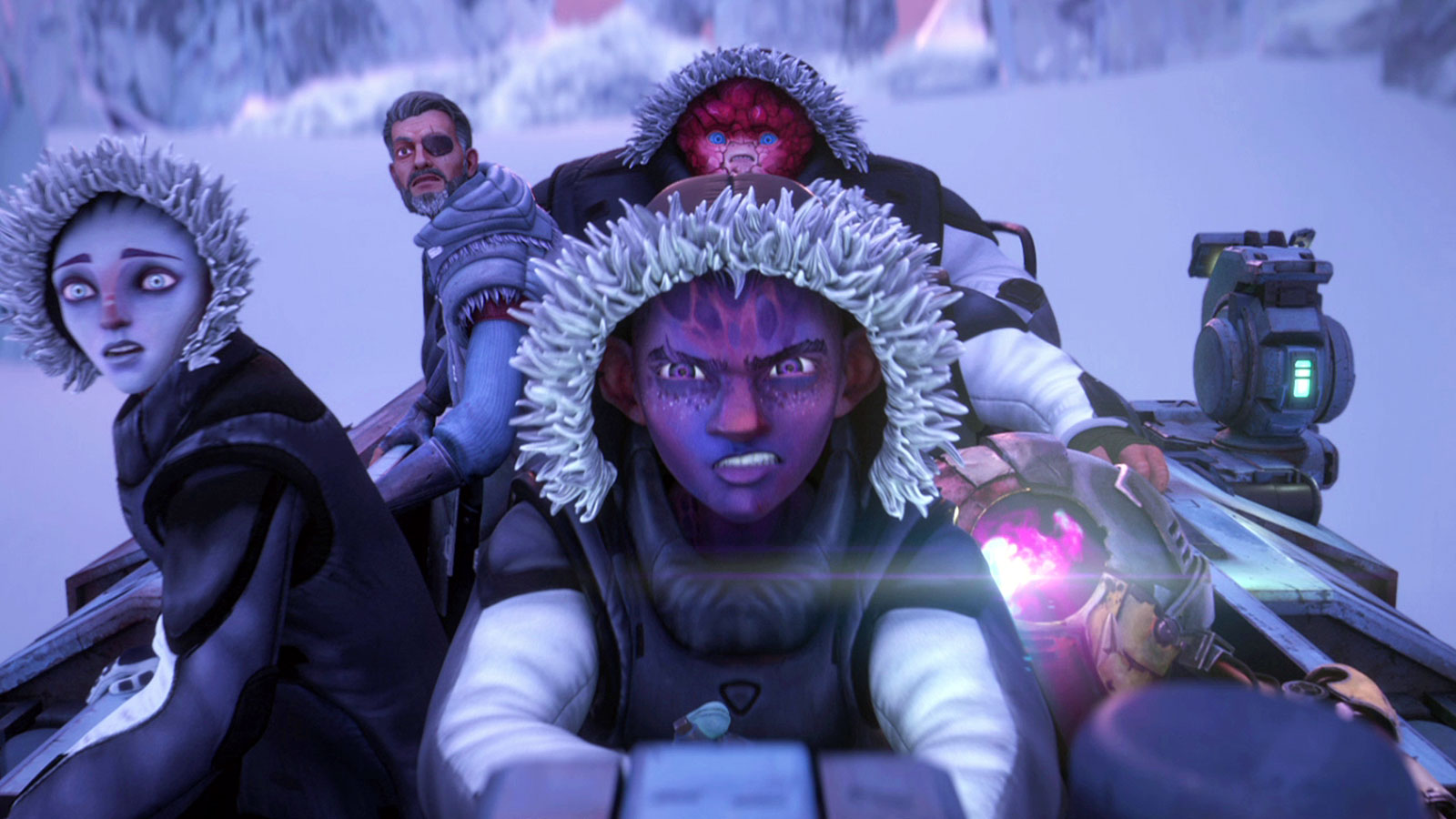 True to its name, “Crossroads” sees the crew of the Protostar and the Dauntless finally meet, but can Dal and his found family outsmart Vice Admiral Janeway without exposing his dangerous ship to Starfleet?

Knowing the Protostar is poisonous to any Starfleet ship it connects to, Captain Dal (Brett Gray) and his crew make the wise choice to bury the Protostar on an ice planet. Hiding their ship and saying goodbye to Hologram Janeway (Kate Mulgrew) indefinitely is no small choice, but the crew shows an impressive level of maturity by ditching their home and endeavoring to find Starfleet another way. For better or worse, they don’t have to travel far from the Protostar’s burial site to accomplish that mission.

At a nearby depot, the crew stumbles upon a familiar face to Star Trek fans: Thadiun Okona, voiced by William O. Campbell, who is reprising the character from the TNG episode “The Outrageous Okona.” Okona seems harmless enough, and initially offers the Protostar crew passage off the planet, but before anything else can happen Okona is stopped by the local authorities for smuggling. But don’t worry, there is more in store for the kids before their time in the depot is over.

Vice Admiral Janeway has found her own way to the ice planet, and she and her crew, including First Officer Tysess (Daveed Diggs), Navigator Ascenia (Jameela Jamil), and Chief Medical Officer Noum (Jason Alexander), beam into the town and start searching. The only information Janeway has is what the still-recovering Diviner (John Noble) has told her; namely, that his daughter’s name is Gwyndalla.

“Jankom is so excited to be meeting a fellow Tellarite! Consider me underwhelmed.”

“I consider you under something. Undersized pauper.”

The two crews do initially mix without knowing each other’s true identity. Jankom Pog (Jason Mantzoukas), for example, runs across fellow Tellarite Noum, where Noum, true to form, is incredibly rude to the smaller, scruffier Tellarite, noting how the last name “Pog” is reserved for the runts of the species. (Yeah, we still don’t care for Noum. He definitely doesn’t seem like Starfleet material, or someone Janeway would surround herself with.) Gwyn, meanwhile, runs across Ascenia, and the Starfleet officer does realize that Gwyn must be the Diviner’s daughter.  The ensign tells Gwyn that her father is on the Dauntless, but the spooked Vau N’Akat ditches the other woman fairly easily.

The two captains, Dal and Janeway, encounter each other, and Dal is a bit starstruck. Janeway picks up immediately that Dal, who as far as Janeway knows is just an innocent alien kid, wants to enlist in Starfleet. Before the two can talk about anything else, Barniss Frex (Eric Bauza), who Dal knows would show no mercy to the kids after they blew up his station, shows up and spooks Dal into leaving the conversation before anything substantial can come of his and Janeway’s engagement. Frex offers Janeway vague descriptions of the Protostar crew, and the vice admiral quickly realizes the kid she was just talking to must be one of the station’s attackers.

So yes, the Dauntless crew spot the Protostar crew, the latter of which thinks Starfleet has it out for them considering they have a stolen Starfleet vessel and destroyed a Federation space station. Our heroes realize they must get back to the Protostar before Janeway finds it and accidentally uses the Living Construct. A high-speed chase between the Protostar crew and the depot’s security follows across the icy landscape as the crew gets back to their ship.

Mid-chase, the crew realizes Okona stowed away on their speeder, and he turns out to be a valuable teammate in losing their pursuers. The crew makes it back to the Protostar and launches a quick getaway, but the Dauntless is not far behind as the two ships enter high warp. Complicating the issue is that Dal and his crew can’t open a channel to the Dauntless, as then the smaller ship will infect the vice admiral’s vessel and cause untold damage.  The bigger ship quickly overtakes its nimble prey and knocks it out of warp – no thanks to a newly hatched and now bipedal Murf (Dee Bradley Baker) – before it can use its protostar drive, all but ensuring Janeway can get her hands on the ship and question its crew about Chakotay’s whereabouts.

However, Okona makes a daring suggestion to help them avoid capture: make their way into the nearby Romulan Neutral Zone (convenient!), under cover of a handy shield modulation (convenient!), so that the law-abiding Janeway can’t pursue. The plan seems to work, as three Romulan warbirds hold up the Dauntless as the Protostar makes a sneaky escape. What Dal and his crew do in the Neutral Zone will have to wait until next week, as well as how Janeway continues to pursue the Protostar even though it’s in an inaccessible place.

There is one sticking point we have about the end of this episode. First Officer Tysess notes his concern about the Dauntless entering the Neutral Zone, to which Janeway replies it would be worse to let the Protostar tech fall into Romulan hands. Tysess then asserts Janeway is only thinking about Chakotay and doesn’t follow her order. We must ask: isn’t Janeway’s logic good enough? It’s sensible to not want the Protostar, a highly advanced Starfleet ship, to land in the Federation’s enemy’s hands. Why does Tysess ignore this logic and flatly disobey Janeway’s orders on the basis that her emotions might be driving her?

In any case, “Crossroads” is a fast-paced episode with plenty of action, all in the name of showing what happens when the real Janeway and the runaway kids finally meet. It’s an event four episodes in the making, and the wait seemed to be worth it. Having the real Janeway give Dal some thought-provoking advice about not letting fear get in the way of achieving your goals will likely be a lesson he and his crew use in their future adventures – and this is even more intriguing because the two crews will likely be running into each other for some time to come.