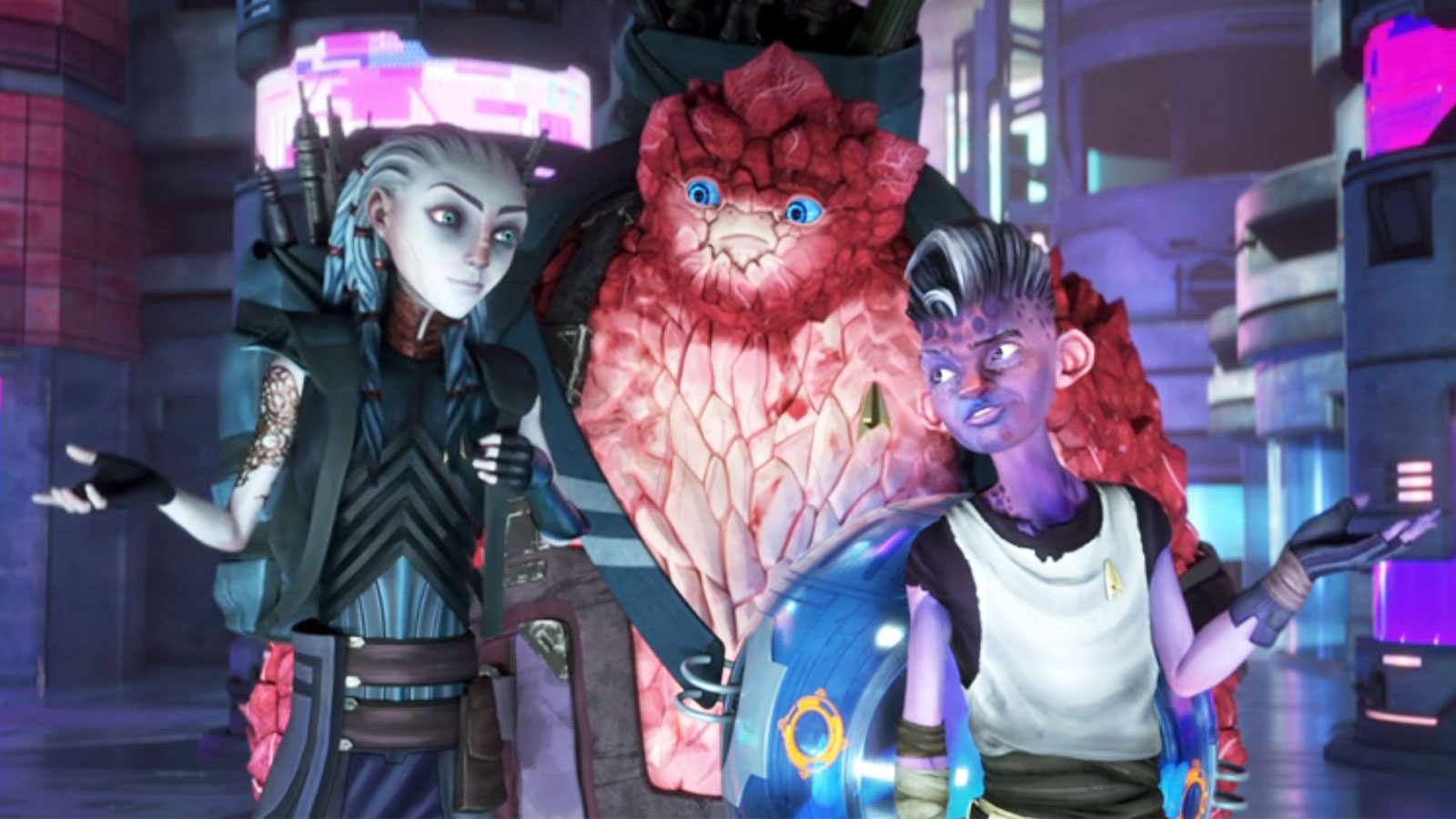 In a revealing episode for Star Trek: Prodigy, Dal finally learns what species he is, while another character reveals she isn’t who we think she is, and we have many questions.

After escaping capture by the Romulans and Vice Admiral Janeway (Kate Mulgrew), Captain Dal (Brett Gray) and his damaged ship journey across the Neutral Zone to a starport, Noble Isle, that not only can repair their ship but one that is known for experimental science. Since “Crossroads,” Thadiun Okona (William O. Campbell) has proven a useful temporary addition to the crew, so much so that Dal is getting jealous of how the older man is adapting to the other kids, and, more hurtfully, how the crew is welcoming him into their ranks.

Upon landing on the starport, the crew meets Doctor Jago (Amy Hill) a genetic scientist whose work isn’t entirely on the up-and-up. But the legality of Jago’s research takes somewhat of a backseat for Dal as he learns she can not only identify what type of species he is but how he can become better. In a great deep cut, Prodigy reveals how Dal is a product of the work of Soong’s Children, the collection of genetically enhanced people led by Arik Soong, as played by the ubiquitous Brent Spiner in a trilogy of Star Trek: Enterprise season four episodes. Dal is a lab creation, a species born of multiple genetic traits, including traits from humans, Vulcans, proto-Organian, and 23 other species. The ability to bring out the best of these traits is certainly attractive to the captain, and he goes ahead with the procedure without the crew’s knowledge.

“All this time… I’m just some failed experiment.”

“That doesn’t change the way we see you. You’re more than that.”

To the surprise of no one, the changes to his DNA don’t bode well for Dal. While he does temporarily gain some enhanced abilities, he ultimately starts mutating unexpectedly, so the crew must rush back to their ship to restore their captain’s health. However, that’s easier said than done, as the Romulans have pursued the Protostar to Noble Isle and started hunting the crew. Clearly seeing this isn’t his fight, Okona abandons the kids to the Romulans, proving that he himself, like Dal’s recent augmentations, was too good to be true. Luckily, our young heroes have an ace up their sleeve; or, more accurately, a recently-metamorphized Mellanoid slime worm.

Murf (Dee Bradley Baker) proves to be more helpful to the crew in “Masquerade” than ever before, as his indestructibility means he can easily tackle the Romulans pursuing the crew. As his friends take a space elevator up to their ship, Murf is even able to protect them from the vacuum of space. What a helpful bipedal slime animal!

Thanks to his newly discovered combat ability, the crew decides to make Murf their new security chief, which frees Rok-Tahk (Rylee Alazraqui), the person who irritatingly assumed the role of security chief thanks to her imposing statue, to pursue her true passion: science. This is a wonderful conclusion to Rok’s character arc which started with her being more or less forced into the security position because she was profiled as an aggressive, destructive force thanks to her size. Of course, we know she is the exact opposite, and it’s a sweet moment when she becomes the crew’s science officer.

Predictably, Dal learns a valuable lesson from his experience on Noble Isle: if something is too good to be true, it probably is, prescient wise words imparted on him by Hologram Janeway (Kate Mulgrew) before they landed. The risk he took to bring his strong traits to the forefront proved too much for him, and his desire to artificially be better ultimately backfired. Kids watching will learn that their imperfections are what make them perfect the way they are, which is as good a lesson as any this show can offer.

What the crew doesn’t realize is that Vice Admiral Janeway, watching from afar, is able to track the crew’s progress on Noble Isle. This b-plot with the Dauntless holds our one and only major critique for this episode: the sense of where the Protostar crew and Janeway’s crew are is confusing. Early in this episode, Janeway is barred from entering the Neutral Zone by Admiral Jellico (Ronnie Cox, who is reprising his memorable character from TNG’s “Chain of Command”), but nonetheless, she can track the kids basically down to the meter.

When the young crew is held up by Romulans and Janeway thinks the Protostar, with all its advanced Federation technology, is in danger of capture, she orders her crew to launch micro-torpedoes and destroy the ship. Luckily, Janeway realizes the kids are actually safe from the Romulans and diverts the torpedoes at the last moment, but this climax illustrates a confusing part of this episode. Why is Janeway able to launch torpedoes, micro as they are, into the Neutral Zone without the Romulans losing their minds, and just how far away is Noble Isle from the edge of the zone so that torpedoes can quickly reach the Protostar? Having Janeway able to impact the journey of the Protostar crew so easily makes the end of the last episode – the part where the Protostar sneaks by the Romulans while Janeway is accosted – lose credibility.

In any case, this spatial discombobulation is soon forgotten thanks to the surprise at the end of the episode.  Ensign Asencia (Jameela Jamil), who up until now has been suspiciously present during the Diviner’s (John Noble) recovery, reveals her true nature. When it’s clear Janeway isn’t close to re-capturing the Protostar, she storms into the room where the Diviner is recovering and asserts how plans need to accelerate. She then morphs into a Vau N’Akat – the same species as the Diviner and his daughter – as the table in front of them morphs into the towering metallic monstrosity that is Drednok (Jimmi Simpson). Asencia asserts the Diviner wasn’t the only one sent back to find the Protostar.

We certainly didn’t have this twist on our Star Trek bingo cards, and we have several questions after this shocking reveal. How long did Asencia have to infiltrate Starfleet to secure a posting on the Dauntless? Why exactly was she sent back in time, and how different are her motivations compared to the Diviner, who, let’s remember, came back in time to prevent the Federation from wreaking havoc on his home planet. Moreover, how did Drednok manage to hide himself on the Dauntless, and how long has he been there?

Taken together, “Masquerade” will likely be an episode remembered mainly for the questions it raises and how these questions permeate throughout the season and beyond. But there are a few other noteworthy things this episode does really well. We totally appreciate the in-depth knowledge this show’s writers have for Star Trek, even though they are ostensibly writing the show for a mostly new, younger audience. Having Soong’s Children come into play, even indirectly, is a great touch that rewards long-time fans, but barely distracts audiences from Dal’s true nature. We also appreciate how this show is spotlighting a golden rule: you need to be true to yourself, and you shouldn’t allow others to determine your identity. Two of our characters illustrated that lesson well in this episode: Rok-Tahk finally broke free from other peoples’ unfair expectations thanks to Murf’s more natural ability to be a security officer, and Dal is likely now a more confident captain following his experience with his genetic alterations.

Our point continues to be this: Prodigy is a great show, folks. Don’t sleep on it.