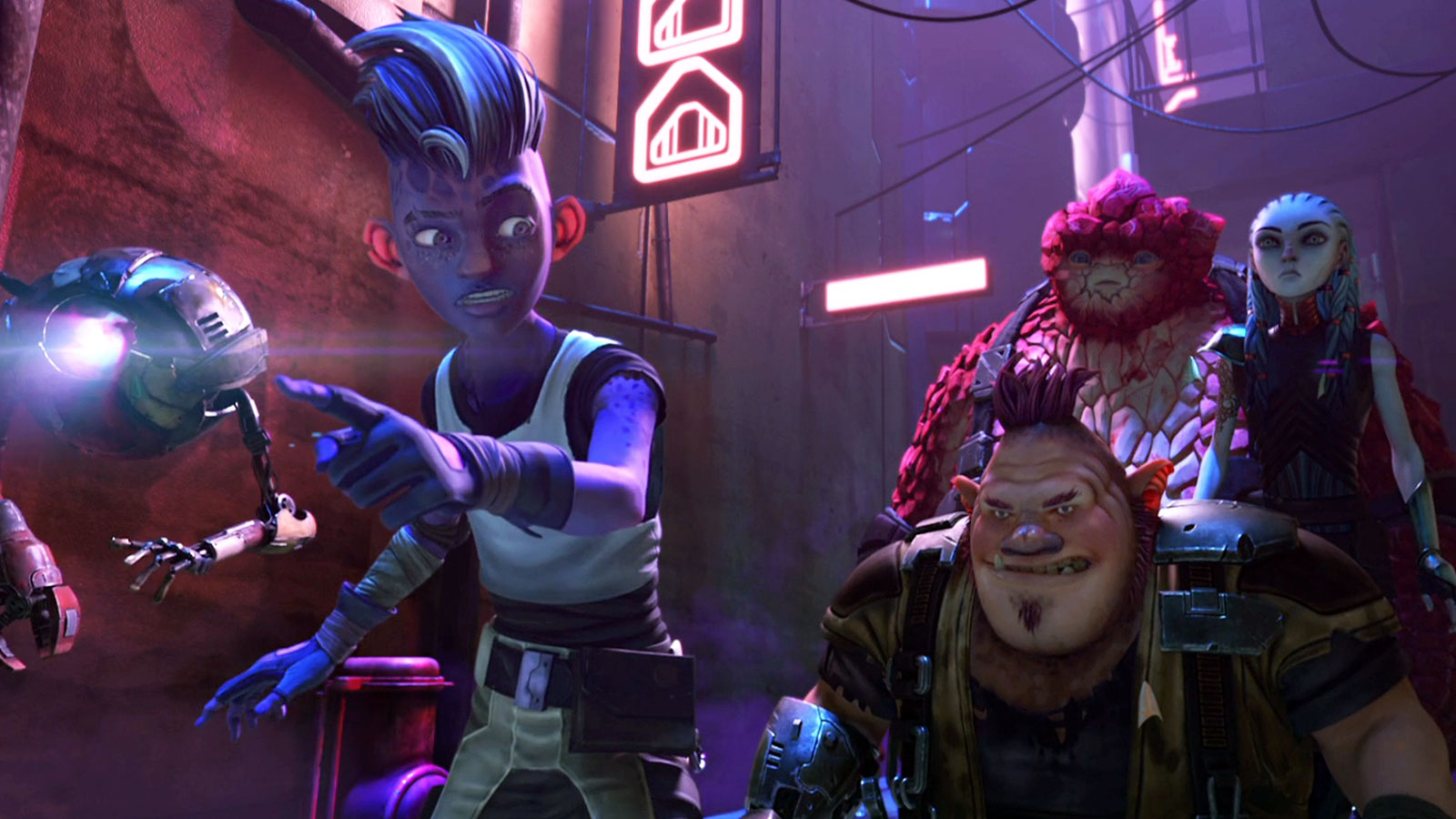 This week, Star Trek: Prodigy takes a crack at the “malfunctioning holodeck” Star Trek episode archetype, and while this type of episode might have been a one-off, throwaway material in classic Star Trek incarnations, Prodigy uses it to service the show’s main plot in an efficient way.

Our young heroes are preparing for the day they run across the Dauntless again, and how they could communicate to Vice Admiral Janeway (Kate Mulgrew) and her crew that the Protostar is a dangerous weapon. They are practicing this scenario on the holodeck, but are getting more and more frustrated as their attempts fail every time. After dozens of tries, the crew takes a break and buries their sorrows in alien ice cream, jolly companionship, and their own personal stress-relieving activities. But soon enough, strange entities start appearing on their ship, and the kids realize they are actually still on the holodeck.

The wonky thing that’s happening with the Protostar’s holodeck is that various programs are intertwining so that characters from each kid’s favorite program are spilling into a story that sees our young heroes trying to track down a treasure while traveling through various locales. This quest to find a skeleton key showcases the holodeck program of choice for our various heroes.

For example, the intellectual Zero (Angus Imrie) spends their time in a mystery-solving program, which serves as the genesis of the kids’ quest to find a skeleton key. We then see Jankom Pog’s (Jason Mantzoukas) program of choice: a scenario where he takes on multiple copies of Doctor Noum (Jason Alexander), as Pog is still sore over how Noum treated him in “Crossroads.” It’s when Pog is fighting the pack of Noums that the crew realizes the safety protocols are off (of course!), so that ups the stakes just a bit.

Even Murf (Dee Bradley Baker) gets to hilariously take the spotlight in his own holodeck program, as he lip-syncs as a lounge singer in a black-and-white mid-20th century locale – a locale that also eerily features the Diviner (John Noble) as the bartender. It’s in this singing joint that Zero realizes the holodeck is purposefully combining elements from only the kids’ favorite programs and not any of the other thousands of programs stored in the database. This only deepens the mystery of what is exactly wrong with the holodeck.

Gwyn and Dal as they escape the piano bar.

Lastly, Dal R’El (Brett Gray) reveals his favorite holodeck program is one where he captains a pirate ship, and the entire crew gives him the utmost respect. Taken together, these glimpses into our characters’ personalities are a welcome touch that allows Prodigy to expand on these characters without blandly telling us who they are and what they care about.

Ultimately, the kids realize they are on a wild goose chase. Whatever is altering the holodeck and trying to get them to find a skeleton key is just killing time. The crew realizes the best way to stop this wayward adventure is to not play the game anymore, and they are saved by Holo-Janeway (Kate Mulgrew) from certain death just in time. But who or what altered the holodeck in the first place?

Well, there aren’t many people on the Protostar besides our young heroes. In fact, there’s only one other entity: Hologram Janeway. Of course, Janeway would never purposefully sabotage the crew and their mission, so Dal and Gwyn (Ella Purnell) quickly surmise Janeway is compromised by the Living Construct housed within the Federation ship.

The evidence is as clear as day when the crew looks back on the holodeck’s monitoring system and sees the compromised captain issuing orders for the holodeck to create a program that traps the kids, all because the kids postulated the idea early in the episode of not seeking out Starfleet at all. But what did the kids lose by being trapped in the holodeck all that time? They quickly find out as they make their way to the bridge, as their ship is out of the Neutral Zone and the Dauntless is looming over them, ready to pounce.

Remember, it may not be Vice Admiral Janeway in command of the Dauntless anymore. In the last episode, we saw The Diviner render Janeway unconscious, although what he did with his two partners afterward is still unknown. We’re certainly looking forward to seeing next week who is in control of the larger Federation ship.

As a whole, “The Ghost in the Machine” is an episode that adroitly spotlights the “show, not tell” axiom of writing. For example, instead of being told explicitly that Pog feels inferior in the aftermath of his encounter with Noum, we see how he reacts to taking on copies of the rude doctor. And instead of being simply told Dal’s confidence when it comes to his crew is sorely lacking, we are shown his fantasy presenting him at the top of his game. We really appreciate this method of storytelling in a show aimed at younger viewers, and it’s refreshing that “Ghost in the Machine” was able to deliver a holodeck-centric episode without retreading ground from other similar Star Trek episodes.