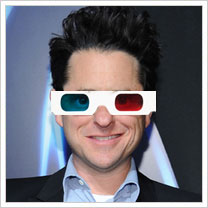 Both Hollywood and the Internet are buzzing with the rumors that Paramount is pushing for JJ Abrams next installment in the Star Trek franchise to be in 3-D. Reportedly, Abrams would consider 3-D if the movie calls for it.

British Actor, Simon Pegg, who plays Scotty chimed in and said, “As far as I know, no” and added, “I mean.. it depends. Maybe.”

Pegg went on to say:

“When something’s made to be in 3D, if it somehow part of the experience, fair enough. I’ve done 3D movies. Tintin is amazing. That is going to be in 3D and that is going to be amazing. Sometimes, it’s like if you see a movie that doesn’t necessarily lend itself to 3D, like perhaps something live action or that isn’t built for 3D, it’s more like they’re worried about it. 3D can sometimes be a vote of no-confidence.”

Another contributing factor is the fact that George Lucas is re-releasing the Star Wars films in 3D, beginning with Episode I in February 2012.

According to What’s Playing, the film is locked for September 2011 to begin production.

We’ll have more on this as news becomes available.

In this article:JJ Abrams, Simon Pegg