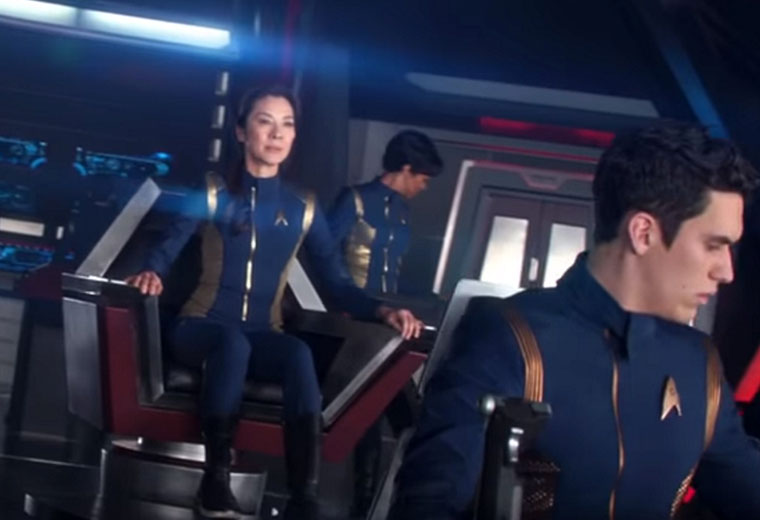 Sullivan was asked about the tone of the show, and he revealed there will be an emphasis on drama, with a touch of humor.

Drama can be defined in so many ways. There will be edge of seat drama, moral drama, political drama – why limit?? This show goes there!

Sullivan was then asked about what he thought was the biggest missed opportunity in Star Trek history, and he thought the characterization in The Original Series was a major weak point.

Love The Changeling bc we get a little window into Uhura, hear her speak Swahili & learn she's proficient in math. That crew was underserved

When asked about his reaction to Captain Kirk’s death in Generations, Sullivan was critical of the way William Shatner’s legendary character exited the franchise.

I found death 2 B confusing & anticlimactic 4 one of most iconic characters in sci fi history. AND WHY BURY HIM UNDER ROCKS? #WTFpiccard pic.twitter.com/RNB0VjoyQR

When asked about Jason Isaacs’ performance as Captain Lorca, Sullivan said it was “riveted” by the actor’s portrayal of the Discovery‘s captain.

I can assure U that I am RIVETED both on set & in edit bay by @jasonsfolly performance. So dedicated 2 making Lorca real/grounded/memorable

Sullivan mentioned how he thinks fans will “love how diverse and inclusive this show is,” and that the show will continue Star Trek’s tradition of holding a mirror to society. He also characterized Discovery has setting a new direction in terms of similarity to other Star Trek shows.

I think like all of them, @startrekcbs is paving its own way & creating its own language but respecting the franchise #excitingtimeforfans

Sullivan also presented a varied list of his top Star Trek villains, with Nomad from the TOS episode “The Changeling” taking the top spot.

The last interesting tidbit from this Q&A was Sullivan’s word association with other Star Trek shows. Of course, he couldn’t specify the word for Discovery yet.