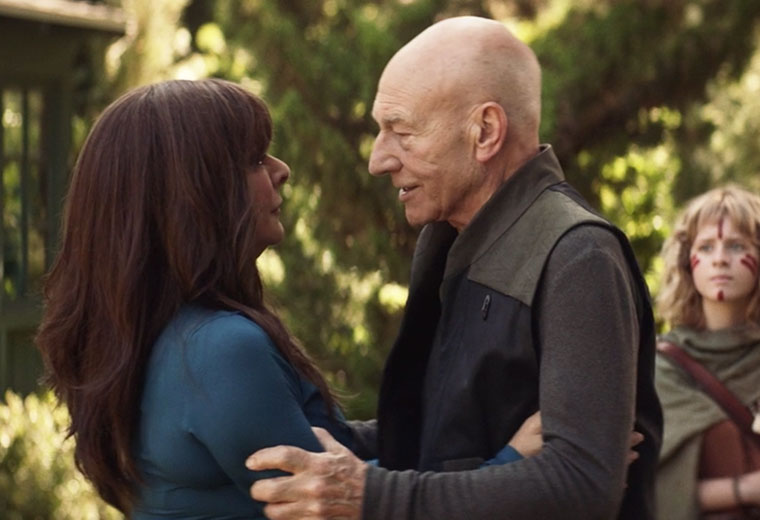 A reunion 18 years in the making finally graced the television screens of CBS All Access subscribers this week, as “Nepenthe” brings together two of the most popular characters from The Next Generation with their former captain. The return of William Riker (Jonathan Frakes) and Deanna Troi (Marina Sirtis) naturally marks a highlight for Star Trek: Picard. It’s an episode that Star Trek fans will devour happily, and it has the added perk of offering other notable performance and plot beats for the show as we get closer to the season finale. 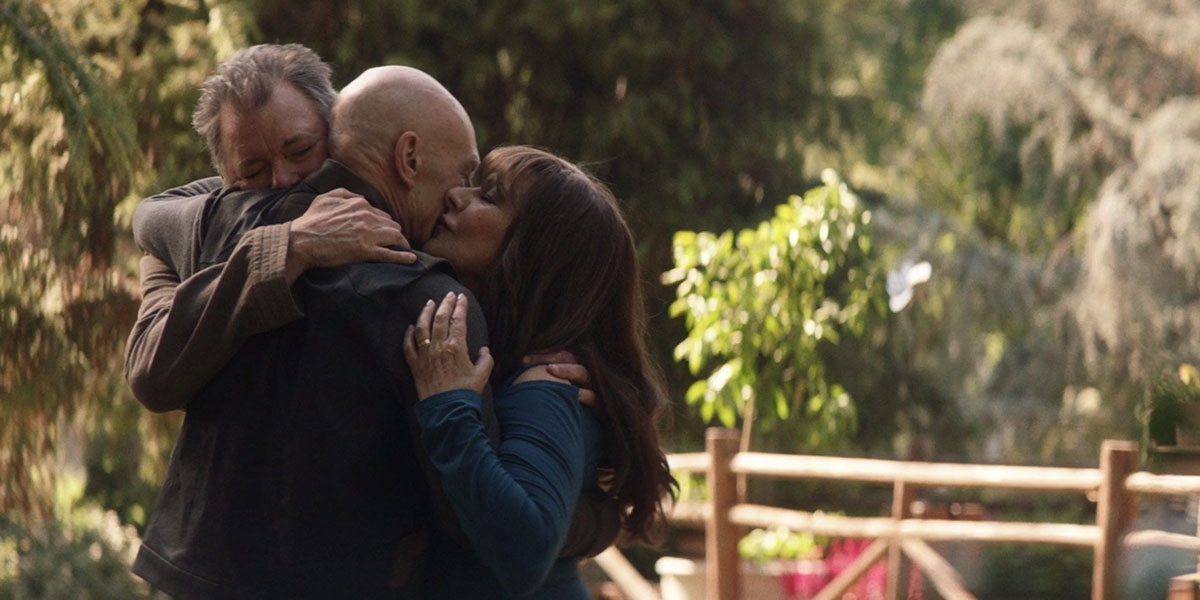 Seeking refuge on the planet Nepenthe, Picard (Patrick Stewart) and the recently activated Soji (Isa Briones) find two of Picard’s old crew. The married couple are happily settled, more or less, in their countryside home, where they live a quiet, relatively peaceful life. However, not all has been paradise for the couple, as we learn their first child, Thad, passed away when he was young due to a medical condition. The child could have been saved had his parents had the use of positronic technology, but because of the ban on synthetics following the Mars attack, no such help could be found. It’s a sad story that shows the widespread impact of the aftermath of the Mars attack. 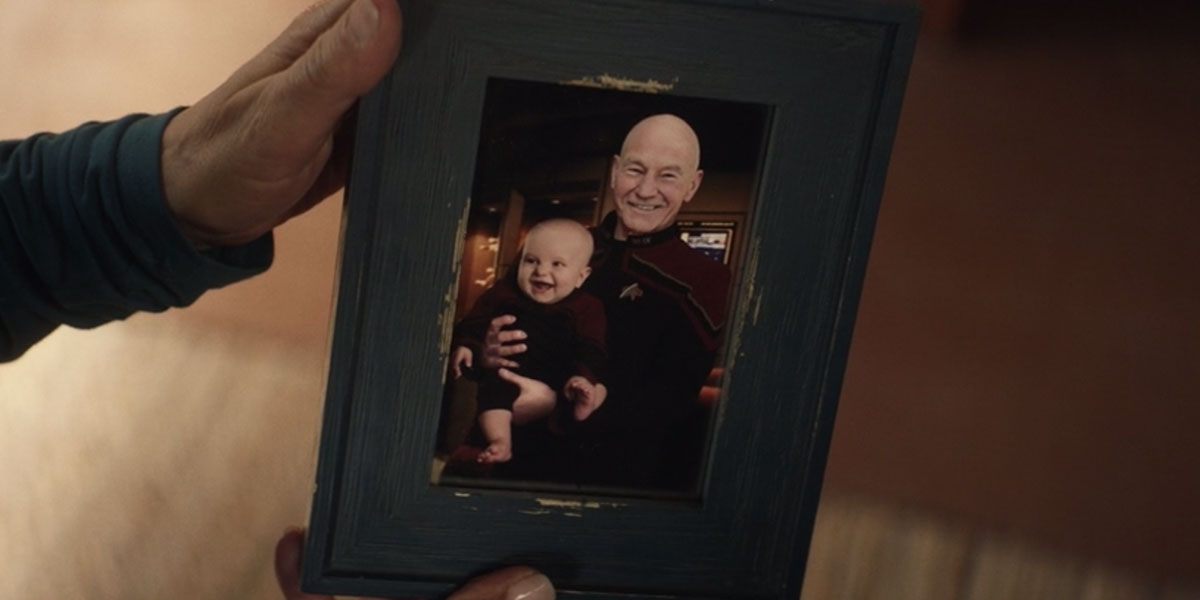 Troi holds a photo of Thad

Thad, as it turns out, would not be the only child of Riker and Troi, as the couple had a second child, Kestra (Lulu Wilson), a curious young girl who proves to be a quick friend of Soji. Having Kestra be entranced with Soji’s android nature, after hearing so much about the late Data, is entertaining, and helps the audience consider Data’s – and Soji’s – pseudo-humanity in a new light. Wilson’s performance here is a surprisingly bright spot of this episode, as the relationship between Kestra and Soji is immediately heartfelt and genuine. 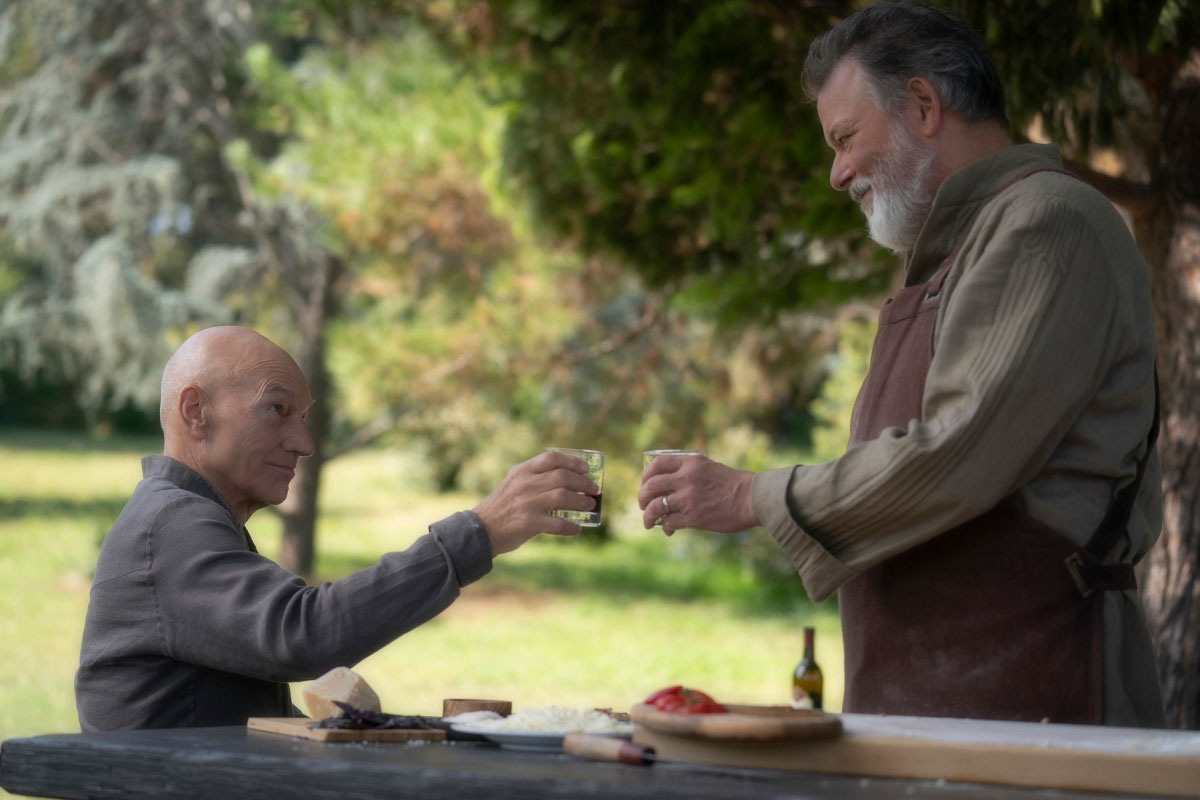 Seeing Riker and Troi re-framed in a new light and new environment is another example of Picard confidently sticking to its new depiction of established Star Trek characters. Picard, Riker, Troi, Seven of Nine, and Hugh are not the same people they were the last time we saw them. The years and events between their last appearances have aged and matured them (Troi’s line about not being as brave as she once was, to which Picard asserts is a sign of wisdom, perfectly represents this aspect of the show), but certain recognizable characteristics do remain. For example, Troi is still as sympathetic and understanding as ever, and Riker still boasts a keen instinct for the safety of his charges. (We are convinced Riker’s house holds a shield generator only as an excuse for Jonathan Frakes to bellow “shields up!” just one more time). 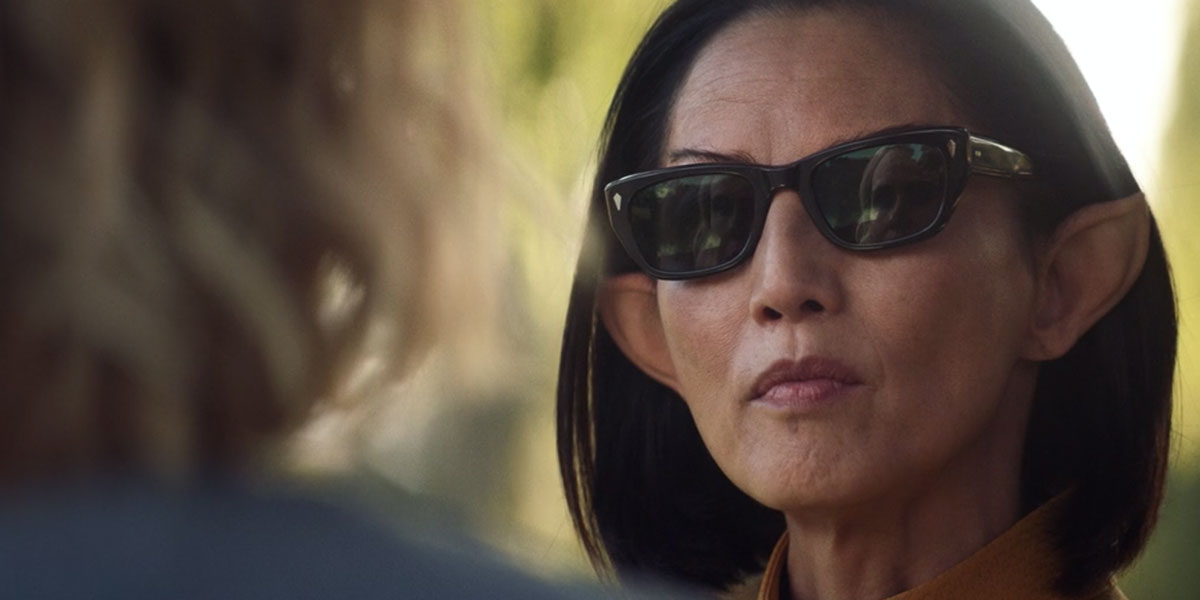 Other events do happen in this episode besides the reuniting trio. We learn via flashback that Commodore Oh’s visit with Agnes Jurati (Alison Pill) back on Earth ended in the commodore mind melding with her in an attempt to show the doctor what would happen should synthetic life be allowed to flourish. It’s a destructive and agonizing sight, so Jurati is enlisted by the commodore to help follow Picard’s movements by digesting a tracker – a tracker Narek ultimately uses to follow Rios and crew. Back aboard La Sirena, Agnes is feeling immense guilt over her role in helping Starfleet stop Picard, and tries to divert her crew from picking up the admiral. Unsuccessful, and with guilt overcoming her, and she tries to sever the tracker’s abilities by placing herself in a coma. 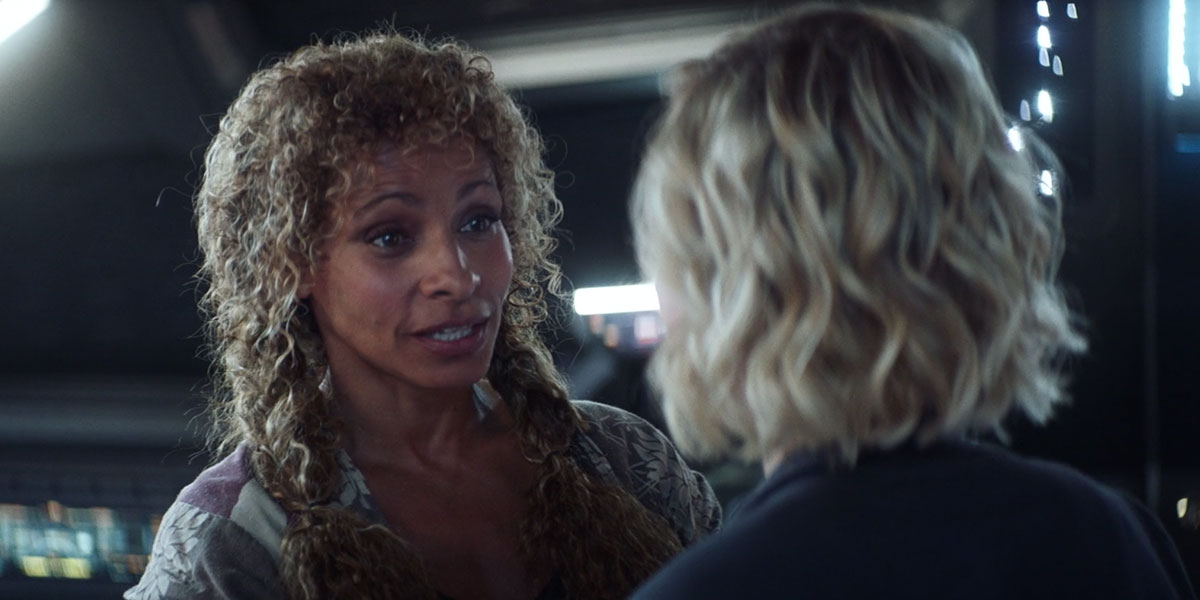 Back on the Borg cube, a surprise death await one of our heroes. After seeing his fellow former Borg murdered by Narissa (Peyton List), Hugh (Jonathan del Arco) is on the warpath to take away the Cube from Romulan control. Along with Elnor, the duo are on their way to the Queencell when they encounter Narissa again, but ultimately the Romulan is able to mortally wound Hugh. He dies in Elnor’s arms, but not before asserting that Elnor will need a former Borg to help access the Queencell, and thanking Elnor for allowing him to be a “hopeful fool” once again. The death of this returning character is unfortunate, but as we noted in last week’s review of “The Impossible Box,” having Hugh serve as a counselor of sorts for Picard’s decades-old Borg trauma was a fantastic reason for bringing the character back in this series. Having served his purpose, Hugh’s departure from the show is sad but appropriate. 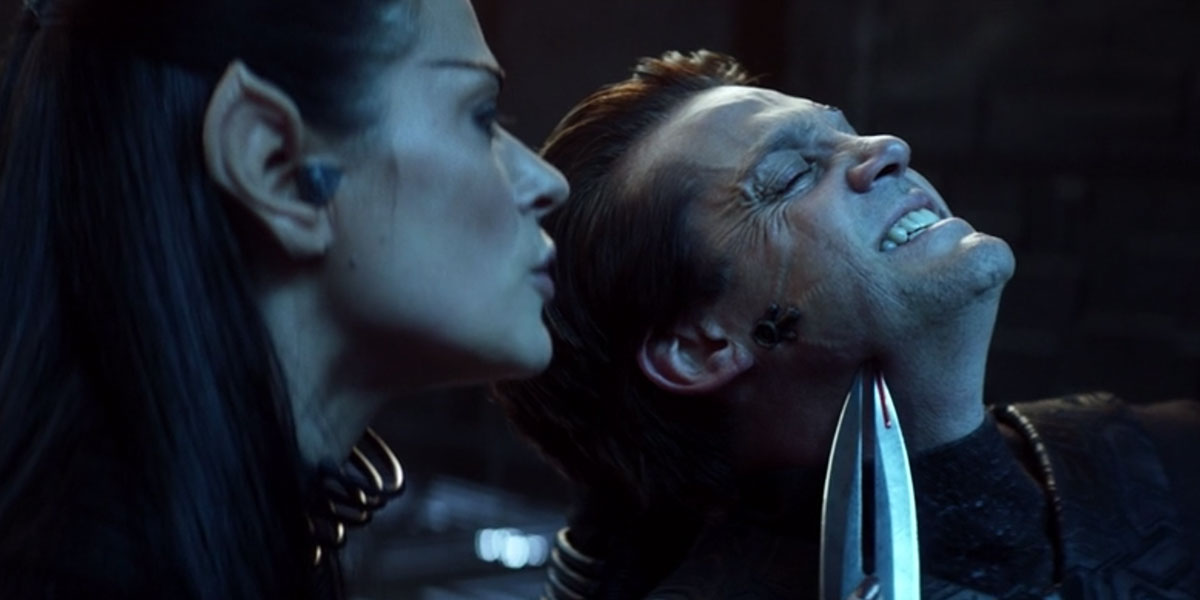 Overall, “Nepenthe” will be remembered as “the one with Riker and Troi,” and of course that’s a good thing, but we shouldn’t ignore the fact that this episode has other notable moments, as well. The introduction of Kestra is a wonderful addition to the Riker-Troi character tapestry, we get some great performances out of the Alison Pill (who up until now hasn’t had a whole lot of heavy lifting to do), Elnor (who up until now hasn’t had remarkable performances compared to his fellow cast), and the now-departed Jonathan del Arco, who has ably provided a layered reintroduction and closure for his character. “Nepenthe” is a solid episode through and through. 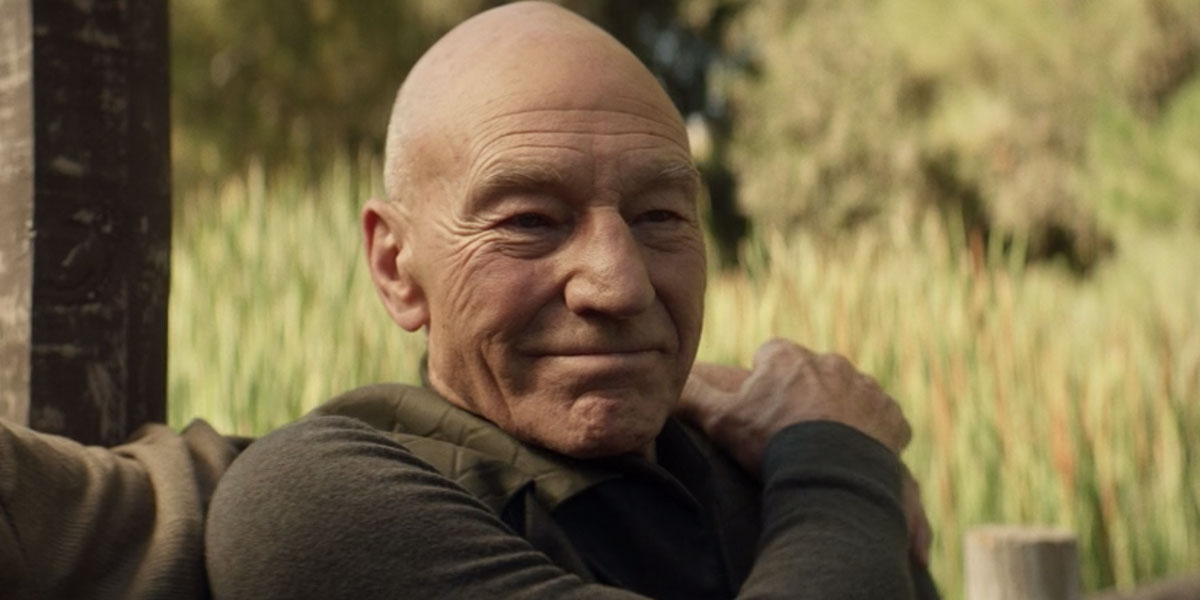 Star Trek: Picard continues next week with “Broken Pieces,” the eighth episode of the first season.