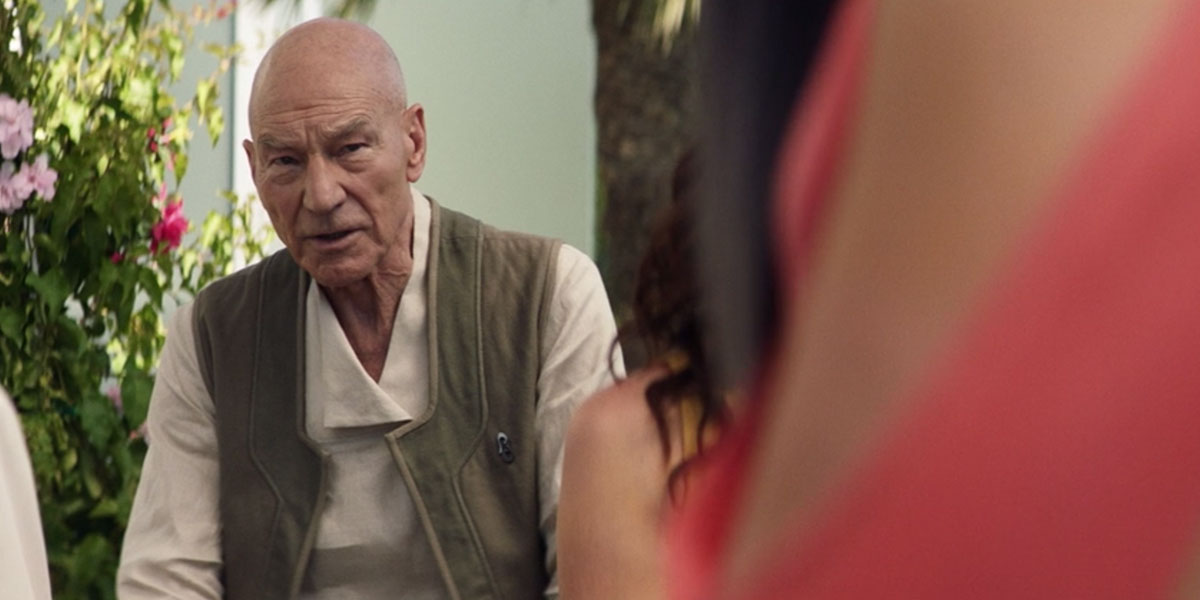 It’s the beginning of the end, as Picard and crew finally find their way to the mysterious homeworld of Soji, Dahj, and other synthetic beings like her.  “Et in Arcadia Ego, Part I” sets up Star Trek: Picard for what is sure to be an exciting finale, even if that means this clunky episode proves to be the episode that merely gets them there.

Besides the surprise appearance of a certain character we’ll get to in a second, the best part of this episode comes in the very beginning, as La Sirena finds itself in a dogfight with the crafty Narek (Harry Treadaway) above Coppelius. This sequence is one of the more interesting space engagements we’ve seen in modern Star Trek television, with some novel camera angles showcasing how maneuverable both La Sirena and Narek’s ship can be.  And best of all, the fight ends with the massive Borg Cube roaring out of the transwarp conduit as several fascinating “Orchids” fly up from the planet’s surface to capture all three ships. Kudos to director Akiva Goldsman for this fantastic scene in his Star Trek directorial debut. 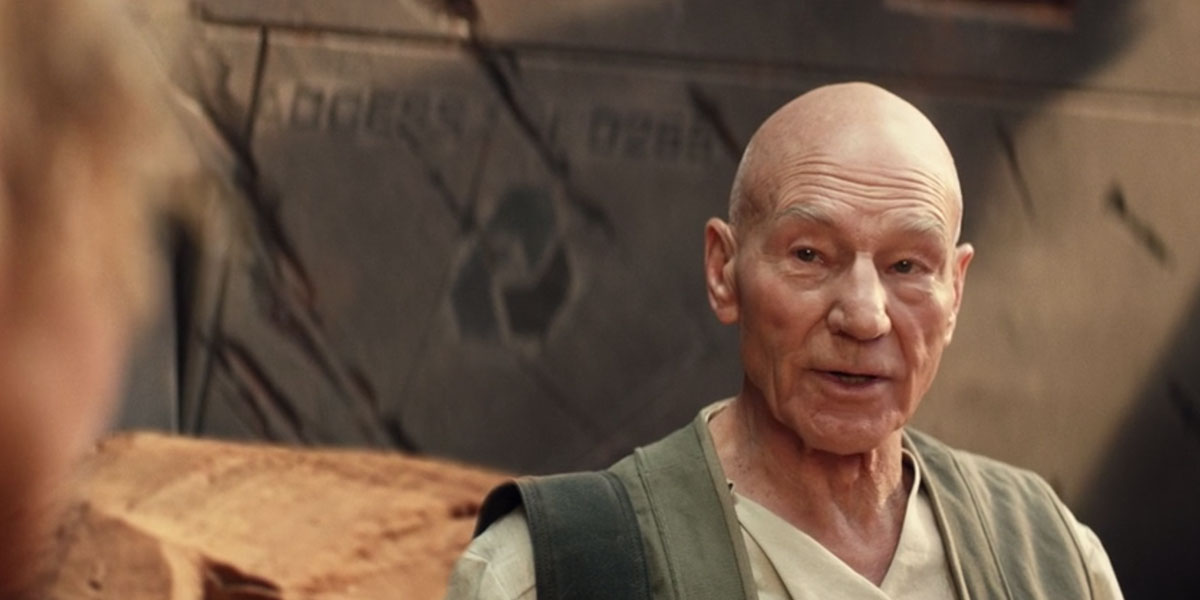 The rest of this episode proves to be pretty exposition-heavy – almost as if the creative team behind Star Trek: Picard knows they are running out of time. After crash landing on the planet, Picard and company make their way to the disabled Borg Cube, hoping to find Hugh and Elnor (Evan Evagora). After entering the Cube and (conveniently) running across the Romulan warrior, the crew learns of Hugh’s demise and the Cube’s new “captain”, Seven of Nine (Jeri Ryan). After learning about the massive Romulan fleet heading for the planet, Picard and crew head toward the nearby settlement that was supposedly Soji’s birthplace. 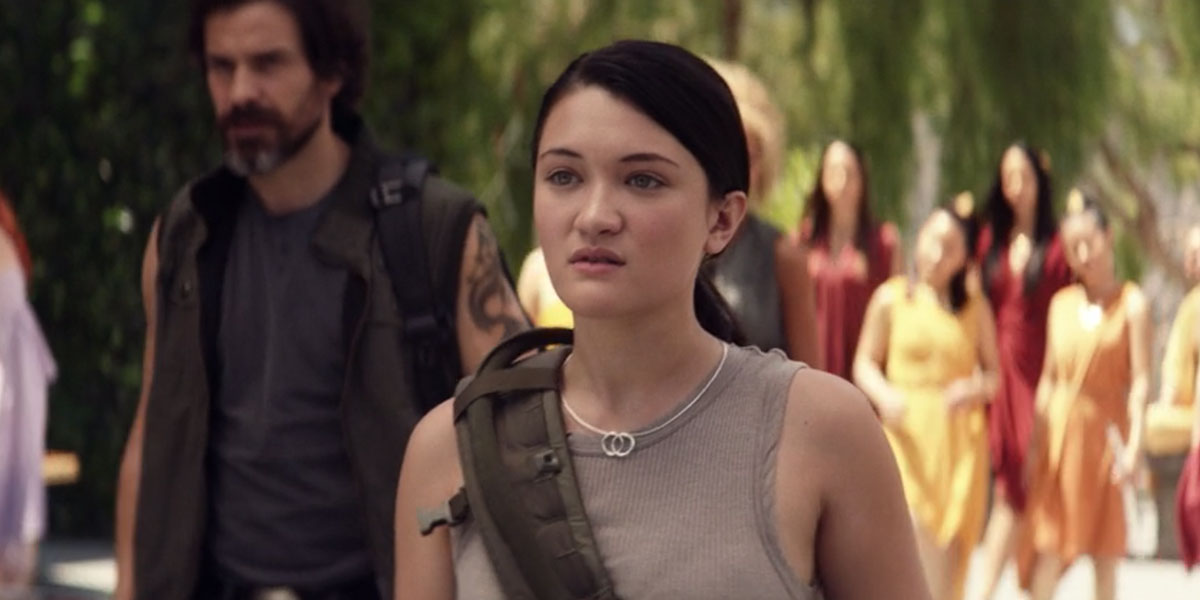 We’ve said it before and we’ll say it again: Elnor needs more to do. After these quick scenes on the Cube, we really hope Picard‘s creative team finds a more productive use for Elnor in the limited time left in this show. His character thus far has been the weakest part of the series – even, at times, inconsequential –  which is a shame because Picard is supposed to have quite the attachment to the young Romulan. In a cast of standouts, Evagora is easily the weakest link, which we think has less to do with his acting and more to do with his character’s overall place in the show. We’ll see if he gets more to do in the season finale. 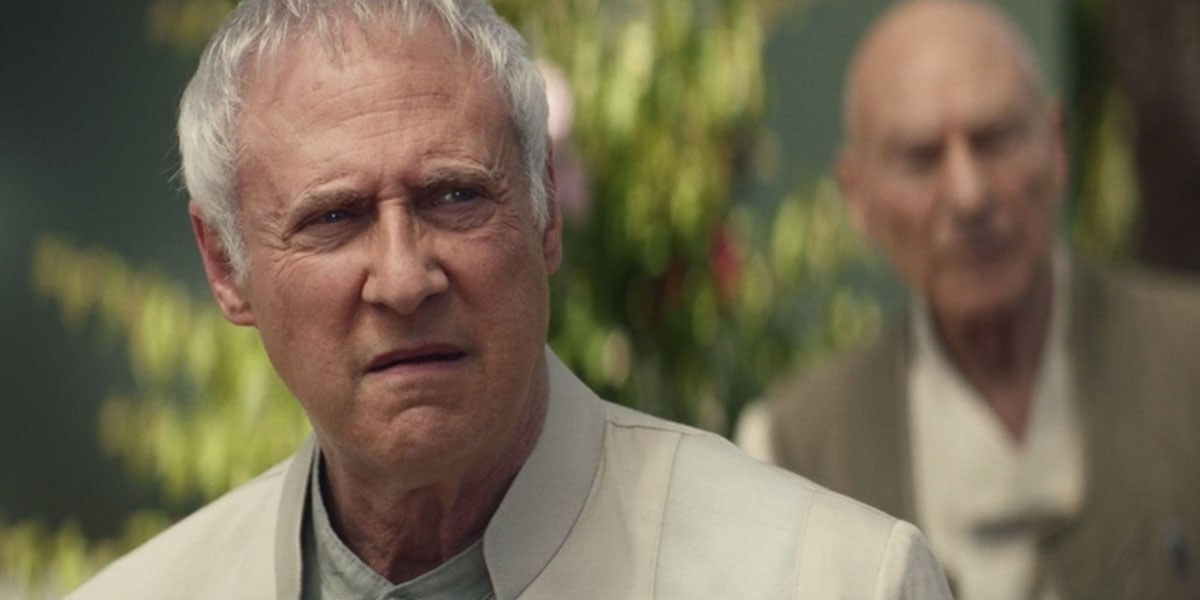 The plot here gets a jolt thanks to the surprise appearance of the son of Noonian Soong, Altan Inigo Soong, of course played by the one and only Brent Spiner. By our count, this marks the sixth Soong Spiner has played: Data, Lore (Data’s evil brother), B-4 (the prototype Data from Star Trek: Nemesis), Noonian himself, Arik (from Enterprise), and now Altan. Spiner’s performance here proves to be reliable as always, although at this point it feels like Spiner is simply playing himself instead of another complex character (which isn’t necessarily a bad thing). This feeling is especially evident in Altan’s first scene, where he jokes about he and Picard being old men – Spiner may as well be interacting with this old friend Patrick Stewart, considering how casual he is. In any case, Spiner is always a magnetic presence on screen, so his appearance here is welcome – and his new character serves no small role in Picard‘s overall plot. While we only get a glimpse of it in this episode, Soong shows Jurati (Alison Pill) his current project: a golem, a, advanced synthetic that also, eventually, might have the ability for mind transfer. Soong says he is working on the project out of a “sense of urgency,” although he doesn’t give specifics. We’ll put on our tin hats here and opine that perhaps this creation will allow Picard to live despite his terminal illness? Time will tell. 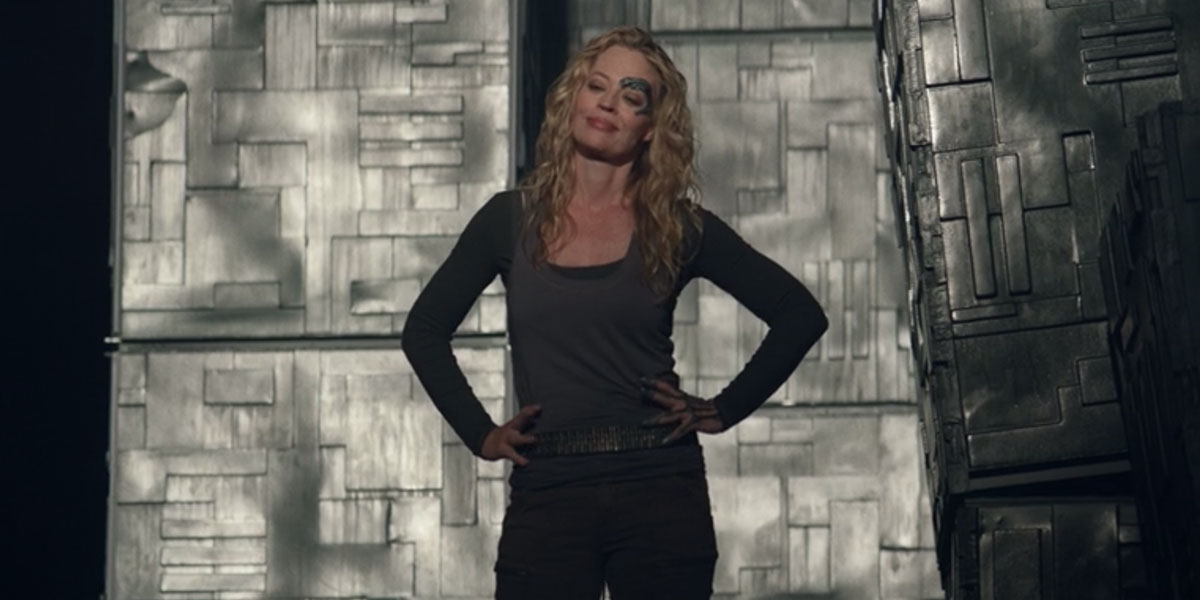 It’s on Coppelius that we get a much clearer picture of the threat facing our heroes. Thanks to some exposition from Sutra (Isa Briones), Soji’s sister, we learn the deadly progression between organics and synthetics: organics build synths as organics seek perfection, then get jealous and scared of synths because they don’t age or get sick, and so they try to destroy them, which in turns destroys themselves. Sutra also tells the group that there are “alliances of synthetic life” waiting out in space. Certainly foreboding! 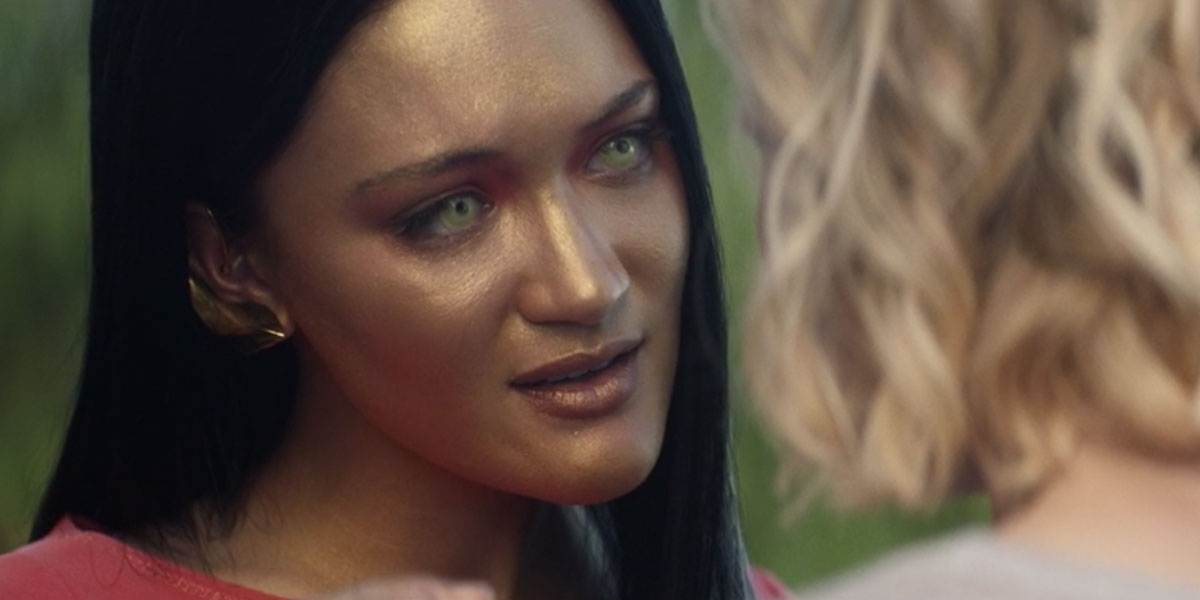 We have a lot of questions heading into next week’s finale. How will Picard get out of “house arrest” by the synths? Will all the synths and Altan be saved? Will be see the arrival of the fleets of synthetic life out in space somewhere? How will Picard and company balance the seemingly inevitable and destructive relationship between synthetics and organics? What will Narek do now that he was freed from capacity and was heading toward the disabled Borg Cube? Based on the trailer for next week’s episode, the season finale is sure to be bombastic – perhaps much in the same way as Discovery‘s season two finale. This is sure to excite fans, but let’s hope Picard is equally able to conclude it’s long-running character arcs with equal finesse. 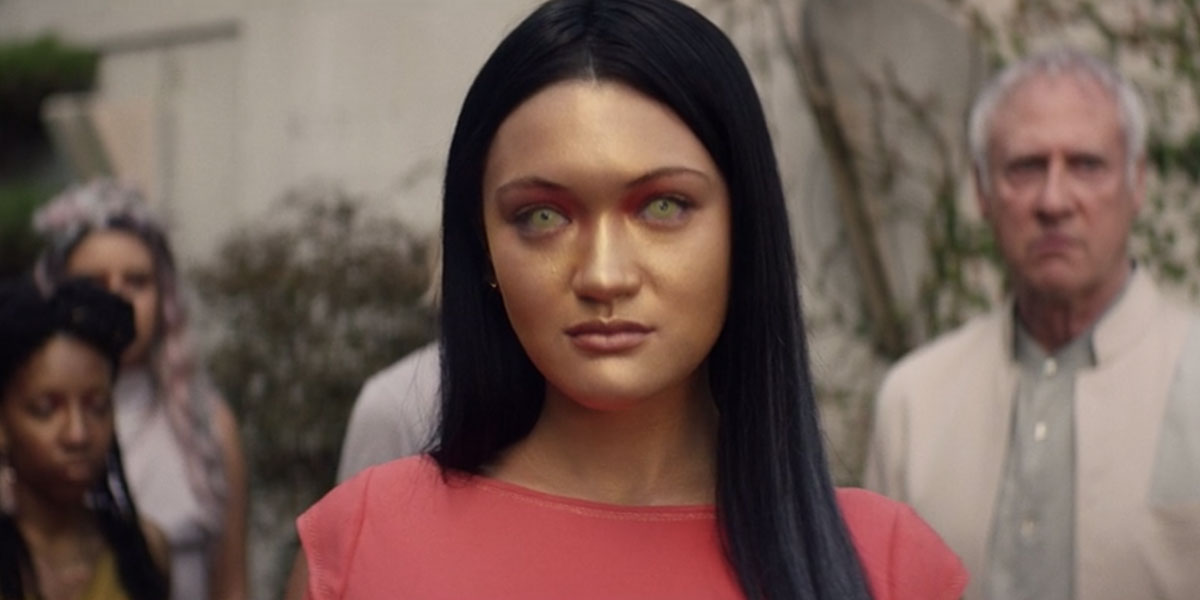 The final episode of Star Trek: Picard’s first season “Et in Arcadia Ego, Part 2” will be released Thursday, March 26 on CBS All Access in the United States and broadcast on CTV Sci-Fi Channel, prior to streaming on CraveTV, in Canada. The episode will be available Internationally through Amazon Prime Video on Friday, March 27.