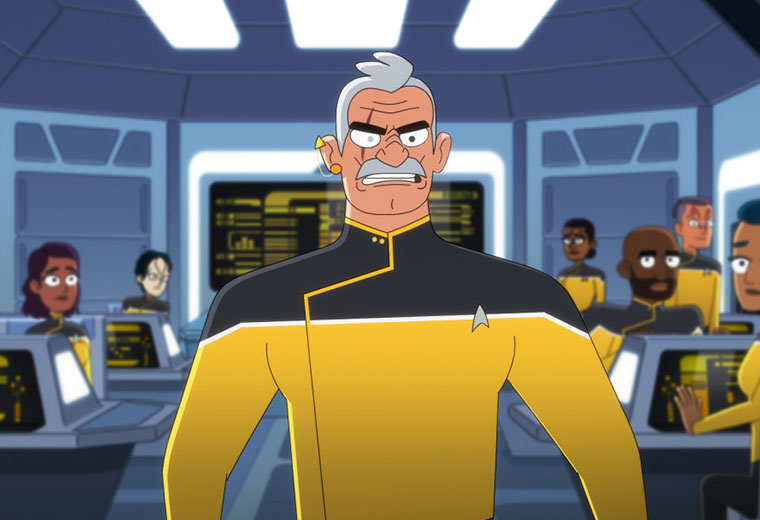 Please note: This review DOES contain spoilers for episode two. Read at your own risk!

The second episode of Star Trek: Lower Decks reinforces our assertion that this new animated series headed by Mike McMahan is in good hands, and only a predictable ending mars an otherwise great episode of this nascent but endearing show. 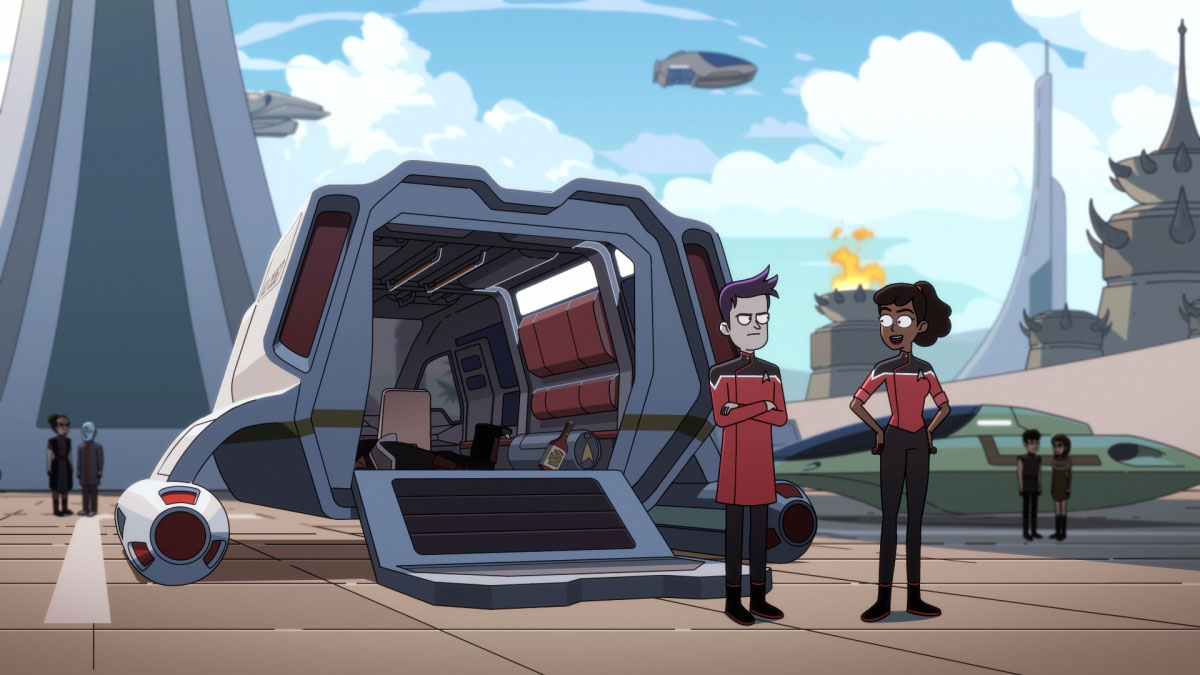 Excited to do his Starfleet duty as always, Ensign Brad Boimler (Jack Quaid) is tasked by the Cerritos‘ command staff with ferrying a Klingon general to a Federation embassy. Mariner (Tawny Newsome) is confused about why Boimler would be so excited about a seemingly boring task, so she decides to come along. Thanks to the comedic misbehavior of the Klingon in question, Boimler and Mariner are marooned together on the planet, whose challenges make Boimler quickly realize he may not be the Starfleet officer he thinks he is.

This fish-out-of-water comedy is amusing while simultaneously offering real character tests for Boimler that the more seasoned Mariner passes with ease. Indeed, if Mariner wasn’t watching Boimler’s back, the young ensign surely would not have survived their journey.  Their misadventures show how inexperienced Boimler is even though he shows the makings of a fine Starfleet officer. Watching him try to ease into the cultures of a strange new world helps illustrate the difference between the ensigns of Lower Decks against the veterans of other Star Trek shows.

To help restore Boimler’s confidence, Mariner decides to setup an encounter with a seemingly bellicose Ferengi, a species she pretends to know nothing about. It’s in this conclusion that the episode loses its steam. How naive must Boimler be to believe that the worldly Mariner wouldn’t know what a Ferengi is, and worst yet, mistake the species with a Bolian? Wouldn’t he be the least bit suspicious about her lack of knowledge here? While Mariner’s plan has its desired effect in restoring Boimler’s spirits, you’ll probably just roll your eyes. 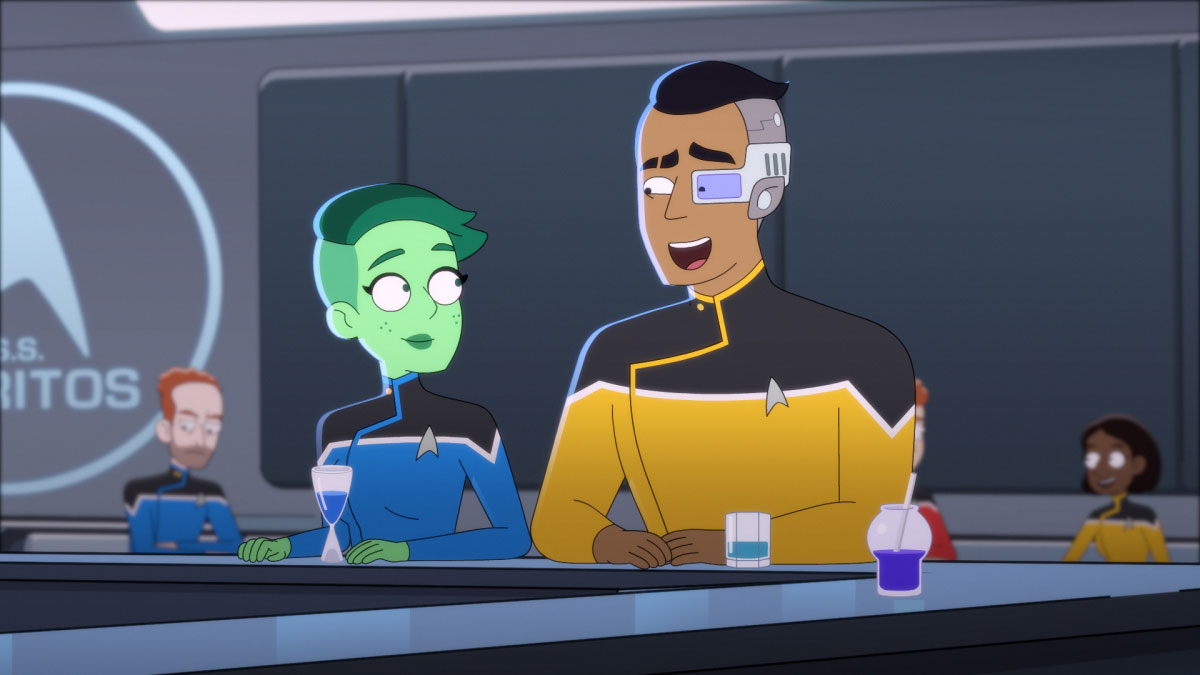 This week’s hilarious b-story involves Ensign Rutherford (Eugene Cordero) trying to make Tendi (Noel Wells) happy by observing a pulsar with her, but there is one slight problem: because of his engineering responsibilities, he can’t actually watch it with her in person. So, the natural solution is… for him to switch careers. Right? We think Rutherford kind of jumps the gun on trying to satisfy Tendi here. Changing divisions just to satisfy this one event? Slightly extreme, and no wonder it didn’t work out like he wanted.  We’ll chalk this story beat up to Rutherford’s people-pleasing character, and not weak or convenient writing. (While we’re talking about the b-story, Rutherford does get the best scene of the episode – his holodeck bridge simulations. Dark, but hilarious!)

“Envoys” contains all the attention to detail that we are quickly coming to expect from this show and Lower Decks‘ quirky self-reflexive humor is becoming the highlight of the show, especially to long-time fans. It’s smooth sailing for this show so far. 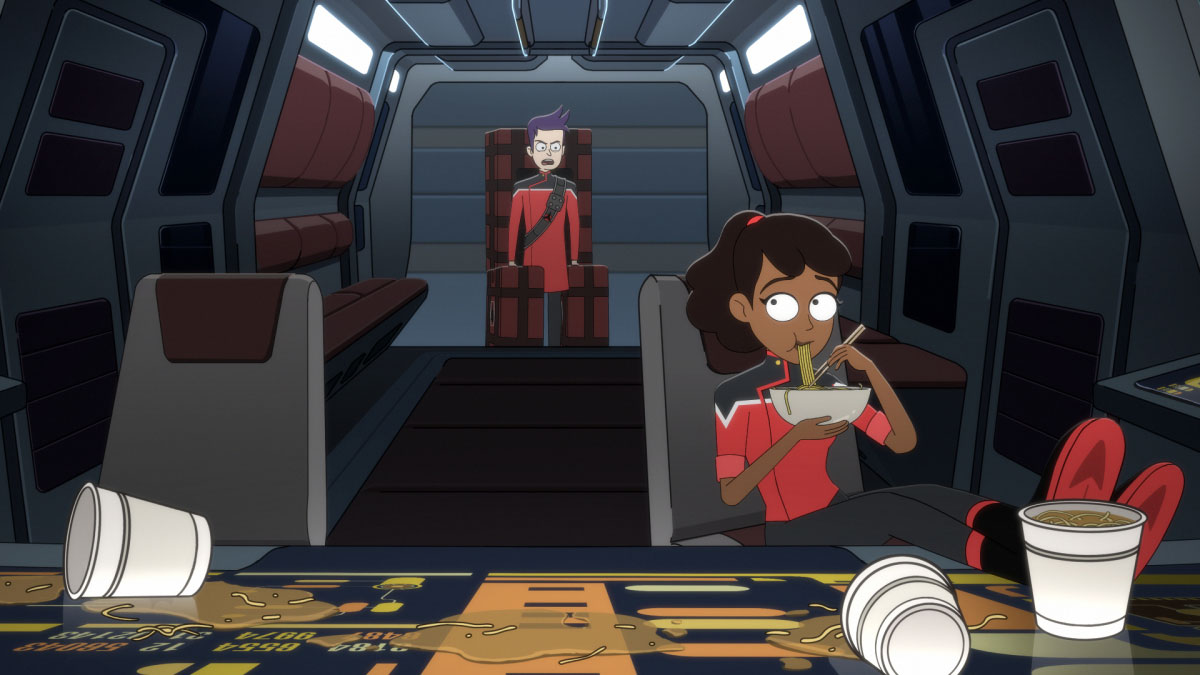 New episodes of Star Trek: Lower Decks are released on Thursdays on CBS All Access in the U.S. The series returns next week (August 20) with the third episode “Temporal Edict.”