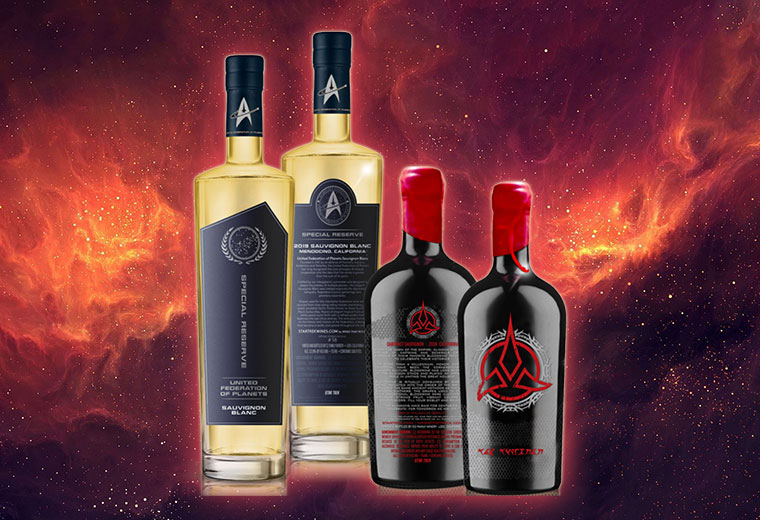 Following the 2019 release of Chateau Picard and the United Federation of Planets Zinfandel, Wines That Rock is expanding their selection of Star Trek-themed beverages with the upcoming release of Klingon Bloodwine and UFP Special Reserve Sauvignon Blanc.

The officially-licensed wines are currently available for pre-order and are set to begin shipping on September 17th.

“Star Trek Wines is one of our all-time favorite projects. The collaboration between Star Trek experts from ViacomCBS Consumer Products team, our award-winning winemakers and designers, as well as several of the world’s leading Star Trek and Klingon experts have produced two new additions to the Official Star Trek Wines Collection that our entire company are proud of,” said Wines That Rock’s President Howard Jackowitz. “Our goal is always to create great-tasting, limited-edition, collectible wines that we as fans want to own and enjoy. As Klingon Warriors would say – Qapla!”

In honoring the ancient methods of the great Klingon vintners, premium Cabernet Sauvignon grapes were used to create this traditional Bloodwine, cultivated to produce strong flavors that glisten a vibrant ruby color in the glass with aromas of dark chocolate and bold flavors. Each bottle is hand filled and expertly wax-dipped at E2 Family Winery.

The second new wine being released this month is the new United Federation of Planets Special Reserve Sauvignon Blanc. Each limited-edition bottle is individually numbered. Designed as a companion to the United Federation of Planets Old Vine Zinfandel, its futuristic round shape and unique label cut were inspired by the Starfleet Delta and are a nod to Star Trek: The Next Generation official issue uniforms.

Wines That Rock is currently offering their selection of Star Trek wines individually and in multi-packs at startrekwines.com.