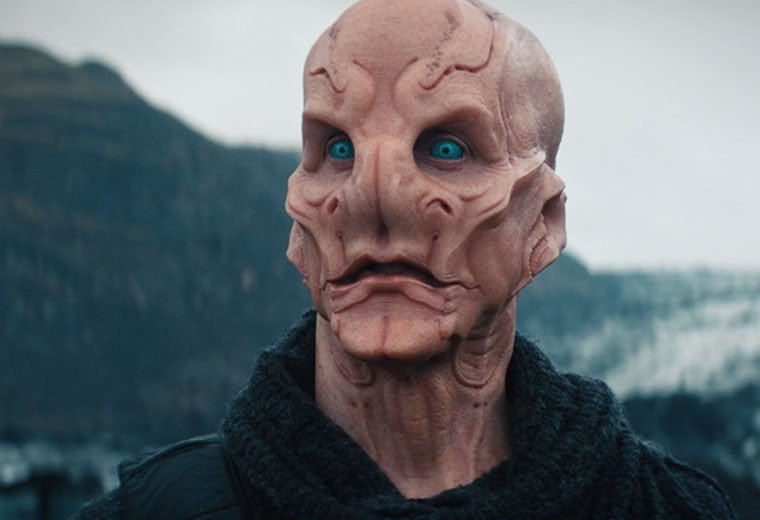 Whereas the season premiere for Star Trek: Discovery showcased Michael Burnham’s journey into the future, “Far From Home” is an excellent follow-up that shows us what happened to the Discovery and her crew after making the time jump.

Director Olatunde Osunsanmi, returning from the season premiere, kicks off this episode with a chaotic sequence showing the badly damaged Discovery descend into a planet below. While the action itself is exciting and gives us some great shots of the hero ship, the best part about this scene is the way Discovery‘s bridge crew frantically works together to try and save their ship. Fans who remember season one of this show likely recall how the secondary characters were often just background fodder, with little character development of their own. Season two did indeed improve on this aspect of the show (remember Pike’s roll call in that season’s first episode?), and it looks like bringing the crew together more akin to other Star Trek shows is still the plan moving forward. That’s great news.

After crash-landing on an icy part of a planet (which brings back some “Timeless” vibes), Commander Saru (Doug Jones) and Ensign Tilly (Mary Wiseman) venture outside the ship to learn more about their temporary new home. While we are used to Tilly getting some subtlety funny and awkward dialogue, which Wiseman still consistently nails, that has always been her defining characteristic. But here, Tilly is tested while on this trek with Saru: confronting the fear of the unknown. After all, who wouldn’t be afraid of a new place, new time, and new dangers? While command staff like Saru shouldn’t let that fear encroach on their command ability, a lower-ranked officer like Tilly is understandably more prone to illustrating that fear. Wiseman keenly portrays a character who needs to face the unknown head-on, and her character’s situation in this episode is a great example of the fear all of Discovery‘s crew must be facing. Seeing how hero characters tackle such emotions lends itself naturally to great character development, which we think Tilly really needed, especially for those who didn’t read the Tilly-centric novel, The Way to the Stars.

Of course, the people Saru and Tilly encounter aren’t all friendly. After finding that some nearby residents are in desperate need of dilithium, something Discovery has plenty of, and that Saru and Tilly need a particular type of power source themselves, this week’s Bad Guy pays the group a visit. Enter Zareh (Jake Weber), a cruel courier (the same profession as Brook) who kills easily and is solely out for himself. He is a product of his time, so by his personality and very presence, Zareh illustrates to Saru and Tilly how bad things have gotten in the future. It’s quite the shocking acclimation, but it doesn’t persuade Saru or Tilly away from their objective: repairing the Discovery and finding Burnham.

Those who have been waiting for 18-months to see more of the ever-acrobatic Philippa Georgiou (Michelle Yeoh), who we must remember is actually from the Mirror Universe, certainly, get their fill this episode. Georgiou is worried about finding Burnham and is eager to get off the planet and look for her despite the dangers currently facing Discovery. Going AWOL from the ship, Georgiou secretly trails Saru and Tilly out to the nearby village, where she arrives in time to save the duo from Zareh and his henchmen. If viewers needed any more proof that Yeoh is perfect for her role as the ass-kicking, mysteriously shadowy former emperor, just know that Yeoh brings her A-game immediately to season three. The barroom brawl between Discovery‘s crew and Zareh’s folks showcases some great action (and not just for Yeoh, but for Saru, too, who uses his newly gained attack ganglia).

In the episode’s climax as our heroes are about to succumb to the planet’s parasitic ice covering, someone comes and tractors Discovery out of the ice. The question on the bridge crew’s mind as they are lifted away: who exactly saved them? Assuming it’s a hostile friend of Zareh, it comes as a surprise then that the person who appears on their viewscreen is, of course, Michael Burnham (Sonequa Martin-Green). While this may not be such a surprise for the viewer, what is unexpected is that Burnham explains she has been searching for Discovery for a whole year. We knew from the season premiere that Discovery may take a while to get to the future, considering the unpredictable nature of the temporal wormhole, but this revelation is eye-opening. What has Burnham been able to do in that year, especially regarding the fractured Federation and its place on the galactic stage? How has her association with Book developed? Has she learned more information about The Burn?

Another lingering question viewers will have after this week: what’s up with Keyla Detmer (Emily Coutts)? After crash-landing on the planet, Detmer suffers a nasty gash to the head and spends the rest of the episode in a state of quasi-shock. While we never find out exactly what’s wrong with her, it’s clear there’s more to her mental state than just a rough crash landing. While unfortunate for the character, it’s a welcome development for fans. Like with Airiam’s story in season two, Discovery is leaning more on its secondary characters to complement its main cast. We wouldn’t have it any other way.

Taken together, the first two episodes, both helmed masterfully by Osunsanmi, showcase how our heroes adjust to their own crash-landings in the future. Now that Burnham is reunited with her family, we feel like the real substance of season three can begin. It’s a strange new world, and we’re looking forward to how Discovery and her crew impact their new time.