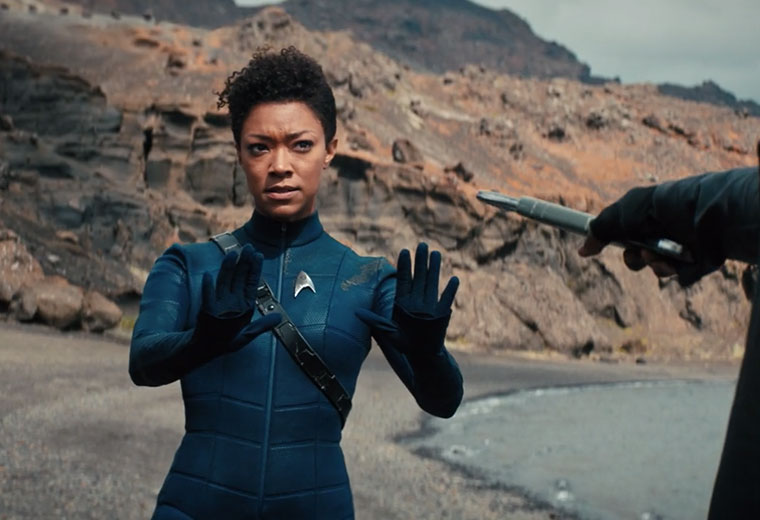 Star Trek: Discovery “That Hope Is You” Review – Welcome to the Fourth Millennium

It’s been a long road getting from the season two Discovery finale to the season three premiere. 18 months, to be exact, an unusually long wait between seasons thanks to the pandemic. The finale for the incredible sophomore season of Star Trek‘s flagship show saw the Discovery and crew transported to the distant future (the farthest point in the Star Trek timeline so far, in fact) after the events with the Red Angel, Control, and Captain Pike, Spock, and the Enterprise. The question that has been on our minds since April of last year: what can we expect when Discovery arrives in the fourth millennium?

Season three’s inaugural episode, “That Hope Is You,” directed by veteran Discovery director Olatunde Osunsanmi, doesn’t keep us waiting to see how different 900+ years in the future is for Michael Burnham (Sonequa Martin-Green). Within the first few minutes of the episode, we see her tumbling out of the temporal wormhole that she and her crew ventured into. On her way out, Burnham, by an incredible coincidence, knocks into and disables a ship piloted by a “courier,” Book (David Ajala), and the two crash land on a nearby planet.

As you might have guessed through marketing materials, these two characters are the anchor through which viewers first gain insight into the galaxy as it exists in 3188. In fact, nobody else from Discovery‘s crew makes an appearance in this episode; this is really the Burnham and Book show, and while viewers may not like waiting to see our other characters, this duo’s hour-long outing is necessary to place Burnham and the viewer in a strange new world.

Burnham outright begs for Book to help her try and find her crew, and while he initially isn’t interested in helping her, his selfish nature secretly drives him to take her to a nearby city, Requiem. On the way there, we learn about The Burn, the main driving force behind why things are different in Book’s time compared to Burnham’s. Apparently, 120 or so years before the events of this episode, most of the dilithium (a term familiar to Star Trek fans as the fuel that makes starship travel possible) in the galaxy suddenly “went boom,” as Book says, causing mass casualties and rendering the once galactic-wide Federation collapsed. Of course, this news shocks Burnham, but she keeps her head up and continues her mission to find her crew.

Because this episode leans so much on Burnham, it reminds us how much we missed Sonequa Martin-Green. As we noted throughout season two, she is an incredible actress, capable of deftly portraying some truly complex emotions in storylines that other actors might struggle with. This episode reinforces our confidence in her, as we see Burnham run the emotional spectrum in her new time, including excitement, shock, sadness, drug-induced silliness, pride, and amazement. Her counterpart, Discovery newcomer David Ajala, provides an adequate performance as the hardened yet goodhearted survivalist, a man who will do what is needed to live in the post-Burn galaxy, even if that means betraying Burnham. It’s clear the two actors will play off each other well as Book helps Burnham acclimatize to her new time.

This episode is bookended by a look at one of the few surviving members of the Federation, Aditya Sahil (Adil Hussain). Manning a former Federation space station, we see him wake up every morning waiting for someone like Burnham to come into his office and reaffirm his belief in the Federation and its values. Once she finally does, the dissolved Federation is proudly re-represented via a flag that can now be proudly displayed thanks to Burnham’s arrival (this scene was all over season three’s marketing materials). The Federation flag looks a lot like what we’ve seen before, but now has fewer stars, probably indicating the damaging effects of The Burn. It’ll be interesting to see other remnants of the Federation and how they have adjusted to life after The Burn. After all, Sahil says he can’t contact anybody outside his little sector of space. Who knows what is out there?

The state of the galaxy certainly isn’t the only question this episode leaves us with. Where, or when, is Discovery? How will Burnham integrate into the dissolved Federation, and what is the state of galactic politics? Is there more to The Burn than what meets the eye? And in the corner of our mind, we’re putting on our tin foil hats and are always looking out for clues as to if this season of Discovery somehow relates to the unnamed, Control-esque foe seen in the season finale of Star Trek: Picard. We certainly don’t put it past Alex Kurtzman and team to create a Marvel Cinematic Universe-esque overarching narrative across these modern Star Trek shows. But let’s not get ahead of ourselves.

As the first episode of a decidedly different era of Star Trek: Discovery, “That Hope Is You” adequately portrays the circumstances Burnham is faced with after jumping forward in time. Discovery now has the difficult task of totally standing on its own, as opposed to getting a boast from established characters and places like what we saw permeate the second season. If we’ve learned anything from Kurtzman-era Star Trek, we’ll likely be pleasantly surprised by what these writers have in store for us.