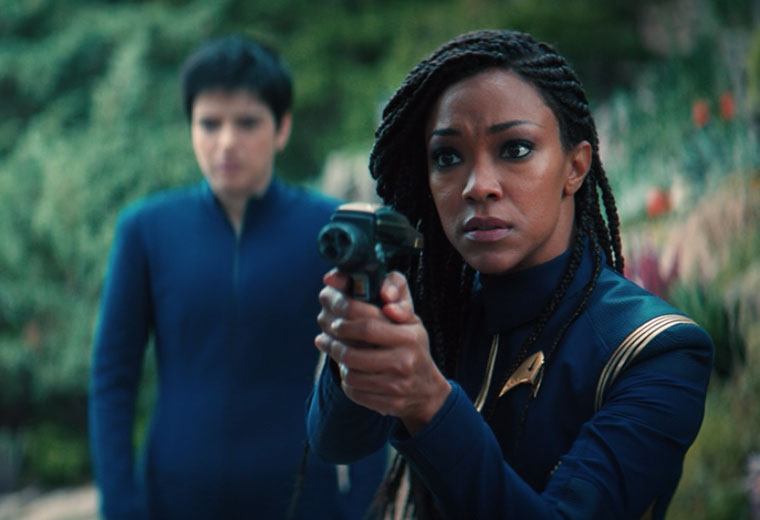 After an outstanding three episodes inaugurating Discovery‘s journey into the future, “Forget Me Not,” directed by Discovery and Picard veteran Hanelle M. Culpepper, pumps the brakes a little bit and turns its focus to character development for a few key characters, most notably Saru (Doug Jones) and Adira (Blu del Barrio), the latter of whom goes on a mission to the Trill homeworld to try and unlock the memories of the symbiont she is carrying.

Accompanied by Michael Burnham (Sonequa Martin-Green), Adira travels to Trill to learn more about the entity inside her, which in turn will inform Discovery about where the Federation is headquartered. Through this journey, we learn much more about Adira’s backstory, including the fact that she had a partner, Gray, played by series newcomer (and Star Trek‘s first trans actor) Ian Alexander. The two were deeply in love when Gray became the original next host of the Tal symbiote, but a fatal disaster onboard their ship forced Adira to gain ownership of the Trill.

“Forget Me Not” certainly is an Adira episode, where we learn the motivations behind the character in an intimate way. Exploring the Trill network so intricately is a novel experience for Trekkies, despite Deep Space Nine dealing so heavily with Trill. We think the jellyfish-esque tendrils that populate the Trill network is a creative way to imagine the generational nature of the species, even if the scene itself was realized solely through somewhat distracting CGI. At first, Adira is understandably afraid of this foreign process, but once Burnham helps her realize the tendrils represent those who came before her and are actually willing to help her, the comforting nature of the Trill host system is realized.

For anyone who has lost a loved one, the reunion between Adira and Gray in the Trill network is touching. Being able to interact with a lost person in such a visceral way grants so much more depth to what we know of the Trill, and the fact that Gray is seemingly sticking around in Adira’s mind adds another layer of depth to Adira’s character development. How she manages to cope with this constant and intimate presence as she helps Discovery will be one of the more interesting questions in season three.

Meanwhile, Saru is grappling with his new responsibility as captain of Discovery, and after noticing his crew’s stress level is high, he opts to host a dinner party for the senior staff. In the exquisitely decorated ready room, Saru and his staff initially get along well, but Keyla Detmer (Emily Coutts) starts acting out of character and insults Paul Stamets (Anthony Rapp). Clearly, Detmer’s behavior is linked to whatever trauma she suffered after Discovery‘s crash landing in the season premiere, and she ultimately seeks some counseling from Doctor Culber (Wilson Cruz). Whereas we once thought Detmer might have been impacted by something more complicated than some sort of post-traumatic stress, like her perhaps being influenced by Control, it appears PTSD is what her issue is. Star Trek has never shied away from tackling tough topics (think about Nog dealing with the aftermath of losing his leg in DS9), and we’re curious as to how Discovery handles this unfortunately common diagnosis.

One really exciting aspect of the Saru b-story is how Discovery‘s computer seems to be evolving. Thanks to the Sphere data contained within the ship, Saru hypothesizes that the semi-sentient computer has adopted Discovery and her crew as its ward, since the crew helped preserve the data by jumping into the future. As we see, the computer helps Saru think of stress-relieving activities that would be otherwise unusual for the computer to recommend. We feel we are getting closer and closer to the Discovery computer seen in the excellent Star Trek: Short Treks “Calypso,” which means we are getting closer to explaining why the crew needs to abandon the ship.

We see more of the rogue Burnham in this episode, more and more evidently a product of her year in the future sans Discovery. When Burnham and Adira are accosted by some Trill do not think it is appropriate that Adira subject herself to the Trill network, Burnham is quick to shoot first, an act we’re told explicitly (and as recently as Saru in the previous episode) isn’t Starfleet’s standard operating procedure. Adira is also taken aback by Burnham’s aggressiveness, so if a new member of Discovery’s crew is able to recognize this unusual behavior, then we’re curious how Burnham’s long-time friends will be impacted by the “new” Michael. This isn’t to say Michael is becoming a “bad” person; quite the opposite. It’s a credit to the show’s writers and Martin-Green’s performance that Burnham is able to toe the line between acting like a good person and being a good person.

Taken together, we can’t say “Forget Me Not” is as exciting to watch as the first three episodes of this season, but we certainly recognize this episode serves its own important purpose. Fleshing out newcomers Adira and Gray will likely pay dividends later in the season, and we’re betting Burnham’s growing roguish nature will come to a head in a climatic way. Seeing more of the Discovery crew interacting with each other, especially in a conflicting way, adds more depth to this crew than we’ve seen before. And of course, we’re eagerly waiting for how Discovery‘s writers explain how we get to the abandoned Discovery seen in Short Treks.