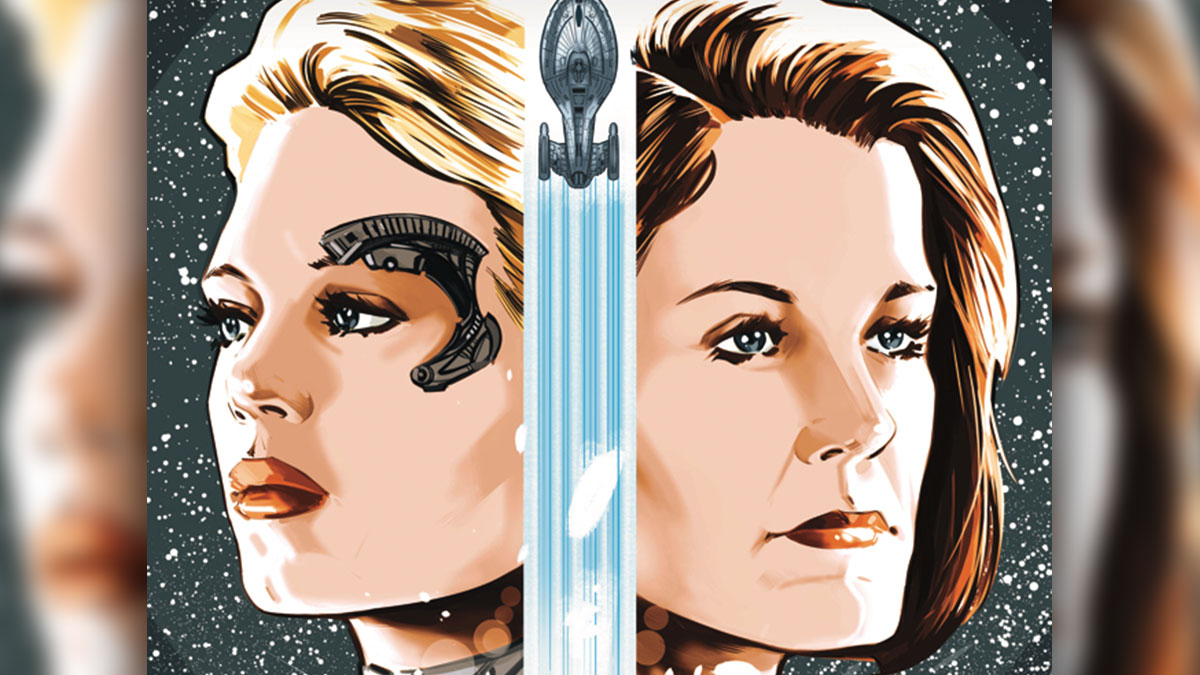 It’s an interesting time onboard USS Voyager. The ship is lost in the Delta Quadrant. A new crew-member, formerly one of the Borg, has joined. The ship’s Captain is sporting a new haircut she is skeptical about. But when an unknown vessel with no discernible identity appears in front of the ship, the mood shifts instantly from interesting to ominous.

With an intriguing first chapter filled with crisp dialog, new Trek-worthy characters, and magnificent art, the voyage of Seven’s Reckoning #1 is off to a smashing start.

IDW’s miniseries strategy with Star Trek comics continues to under-promise and over-deliver, much to the delight of their evil genius editor Chase W Marotz who has been monitoring the comic Trek-verse like an omnipotent Q. IDW keeps rolling out great miniseries titles one after another like Too Long A Sacrifice, Picard, Discovery: Aftermath with no end in sight. The urge to resist ongoing titles until there’s a story that truly deserves it, like the spectacular Star Trek: Year Five (also edited by Marotz) in favor of a streamlined inflow of miniseries seemed like a narrow-minded strategy in the short term but all these years later, by pushing this umbrella approach that touches every show, it’s really the best approach IDW could have taken.

With the all-inclusive miniseries rollout IDW, above all else, accomplishes two very important and very positive things:

Before we proceed we need to have words about the incredible cover of this book. Nothing short of glorious is expected from veteran artist Angel Hernandez who drew both the book’s regular cover and its interior art at this point. He obviously nails the pencils but what makes the cover worthy of premium shelf space is the coloring palette of Charlie Kirchoff. Kirchoff is no stranger to Trek comics, but his approach to coloring this particular cover was unique, which he elaborated on Twitter last week. The first issue is barely out and I’m already drawing schematics in my head for the best visual angle to display this book on my shelf. What an impressive, impressive piece of art.

Not long after Seven joins the crew of the USS Voyager, while continuing to find a way home, the ship runs into a mysterious vessel that sends out an unusual hail. Determined to learn more and ready to help Janeway sends a crew to the ship’s surface, Tuvok, Chakotay, and Seven among them. A walk along the ship reveals a seemingly abandoned world. Apocalyptic prophecies, lurking dangers, and a turn of events bring Seven to the forefront.

Dave Baker is the series writer for Seven’s Reckoning and few could have pulled off a better first issue than him. This is Baker’s first foray into full sized Trek comics (he previously wrote a one-shot in 2018’s Waypoint Special) but you could be easily fooled into thinking otherwise from the way he writes.

Writing an effective Trek comic is a daunting task. First and foremost you have the responsibility of bringing to life characters whose stories have been watched by some of the smartest and most keen viewers in the world for years, if not decades. Then there’s technobabble, or rather Treknobabble, which is technological information uttered in the Trek-verse that needs to not only be casual enough that if the lines go over your head you’re not missing key elements of the plot but also be sensible enough that if you closely inspect this dialog, it has to add weight to the story. Finally, there’s an unspoken responsibility that Trek scribes bear with them while telling every story, the responsibility to let a strong moral or principle that teaches us more about the characters and ourselves organically emerge from within the tale.

While I’m reasonably confident Baker will come through on the third item on the list by the time Seven’s Reckoning ends, he shows a commanding grip on the first two. The returning characters are indistinguishable from the ones we have seen on screen and the new characters that arrive click in like a missing puzzle piece in Voyager’s mythology. The Treknobabble is spot-on. If Baker can keep this up, he can write Trek comics for decades to come.

It can get difficult to find new ways to praise an artist whose work has been stellar for years but as challenges go for comic reviewers, this is as easy as it gets. The penciler Angel Hernandez has drawn titles across the Trek pantheon in the past and I’m yet to find a book born from his pencils that doesn’t meet the high-quality mark that Trekkies deserve. Seven’s Reckoning adds to that long line of visually impressive titles. One thing to always watch for is Hernandez’s attention to detail. He draws with the assumption that every reader puts his pages under a microscope and it shows. The spaceship splash of the Voyager is a great thing to have but you can tell real love has gone into the art when even in a panel with five people and Chakotay in the background, his face tattoo is accurate.

As good as the pencils are, a bad colorist can easily ruin the page. Thankfully, that is not the case with Ronda Pattison. Another new arrival to Trek comics, Pattison complements the pencils with colors that inject a subtle industrial, neon glow. Pattison exhibits great care in ensuring the colors never overshadow the pencils and in spite of the sophisticated fill of a color mix, Hernandez’s line strokes or vivid detail do not disappear. Like with Kirchoff on the cover, Pattison is the right wing-person for the interior art.

Seven, fresh from her grand return on Star Trek: Picard, seems poised to have another exciting adventure in this series. A particularly intriguing debut for writer Dave Baker, Seven’s Reckoning promises great things for both the Voyager’s crew and for us captivated readers.