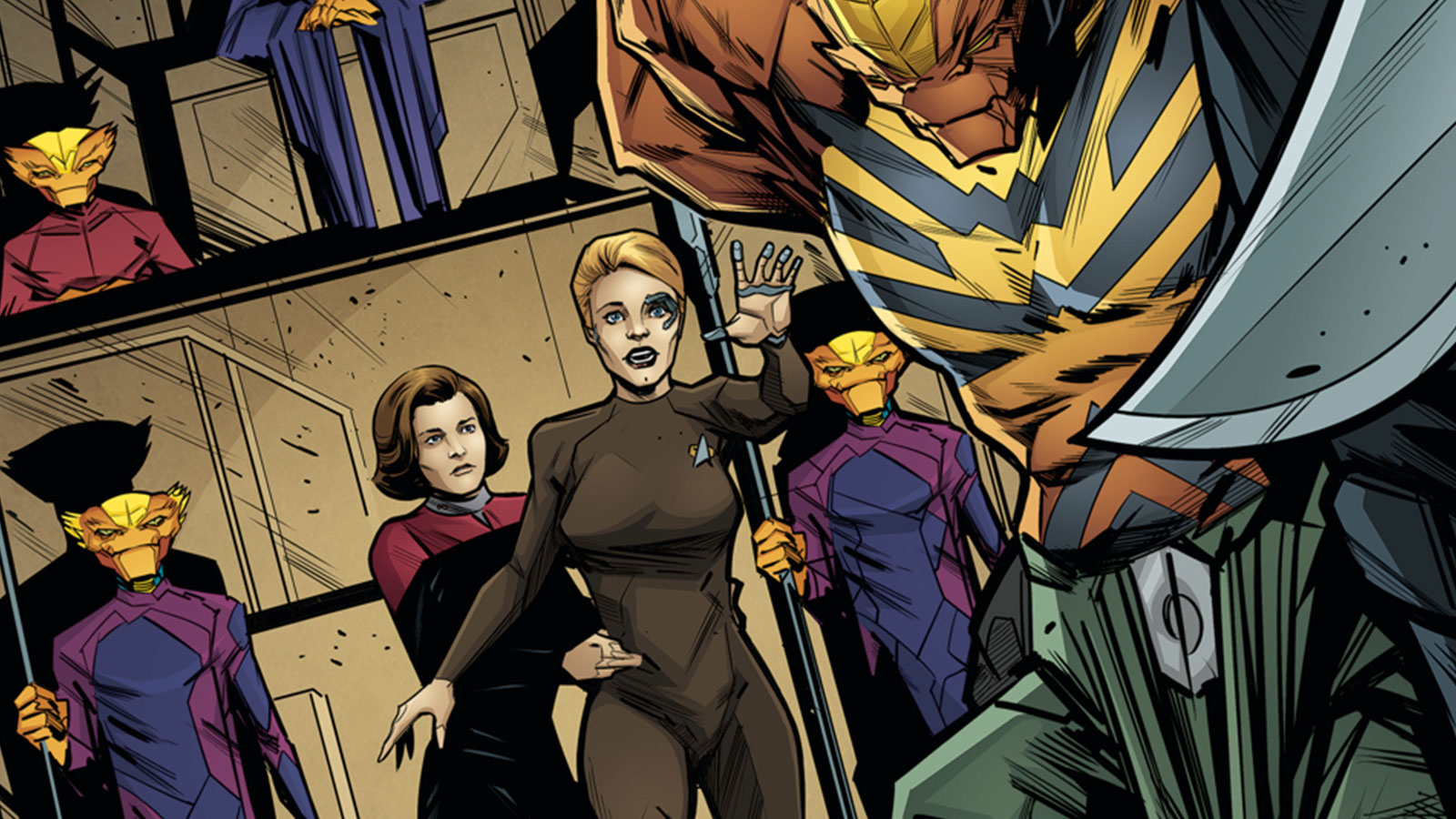 Seven awakens, dazed. The last thing she remembers is assisting Greeb in rallying the slaves against Septa aboard the Ohrdi’Nadar ship before being thrown off her feet by an explosion. Now she is in the Voyager’s medical bay, surrounded by the concerned bridge crew. Questions must be answered. Actions must have consequences. There must be a reckoning.

There are no easy ways out or clean answers in the final issue of Seven’s Reckoning, but the tale is masterfully told and the morals to be learned are plentiful and deep.

For the longest time, I left Voyager abandoned in the lower echelon of the Star Trek franchise. While it felt good to have that black box in my Trek head-canon filled, after watching the series all the way through just a single time, it wasn’t a show that stuck with me as Deep Space Nine or Discovery had. In 2020, two Voyager-centric works that celebrate the show’s twenty-fifth anniversary – Voyager: A Celebration and Star Trek: Seven’s Reckoning – have me rethinking my Star Trek rankings. The first book helped me understand the innumerable challenges and hiccups behind-the-scenes of a series as wide in scope as Voyager. The second has opened my eyes to the narrative possibilities within Voyager, more specifically those that come from having characters like Seven of Nine. Even though Seven’s Reckoning culminates with this issue, it has lit a spark in me to revisit Voyager with a fresh perspective.

Are there other stories as profound as this comic’s in the show? What did I miss?

What started as an innocent exchange of repair services in return for much-needed resources between the vessel of an alien race called the Ohrdi’Nadar and the Voyager crew has turned into a rebellion of the slave laborers trapped in the grip of the ship’s commander Septa, thanks to revelations learned by the slaves’ leader Greeb. Seven is in the center of all of it and just when it seems that victory is at hand for the slaves, an explosion sends Seven back to the Voyager. The fate of Greeb and the slaves is unknown, and when she lands back on the ship, things have changed drastically, and not in the way she had hoped.

Seven’s Reckoning is writer Dave Baker‘s first Star Trek miniseries and from page one of the first issue, the sense that Baker is uniquely equipped for Trek comics is strong. By the time I flipped to the last page of this issue, it just feels wrong that IDW hasn’t announced that Baker will be writing at least a dozen more Star Trek comics for our pleasure. Baker has the voice and cadence of the Voyager crew down pat along with intriguing Treknobabble, but his real triumph, and one that rightfully earns him the right to tell many more stories in this world, is the Ohrdi’Nadar.

The Ohrdi’Nadar are an alien species that, much like the Ferengi and the Klingons, leave a lingering impression. These aliens treat story as religion. The slave laborers call fighting in a revolution “taking back the narrative”. Septa, the ship’s commander, calls himself the Grand Protagonist. Narrative is to them what wealth is to the Ferengis. Telling a good story is to them what dying in battle is to Klingons. Baker not only creates a civilization that resonates in the storytelling walls of Trek, he carries it so well from inception to the finished page that you cannot help but root for their return. Going into any more detail would delve into spoilers, which I dare not do, because that would mean ruining a great story and earning the wrath of the Ohrdi’Nadar.

Angel Hernandez continues to uphold his reputation as a grandmaster Trek artist with Seven’s Reckoning. The Voyager crew looks spot on and he is particularly successful with Seven, a character whose personality and visual design make it more difficult to express emotion. There is a rhyming pattern in the first three pages of each of the four issues, all symbolically tied to the raven, which Hernandez and colorist Ronda Pattinson execute expertly. The color palette Pattinson chose for the Ohrdi’Nadar carries an unusual brightness that feels oddly placed when we meet them in the beginning but as the story goes on, the choices, like pieces of a tan zhekran, click together well. Sometimes the brightest things hold within them the most profound of sorrows.

Dave Baker and Angel Hernandez bring to close a powerful and timely tale in Seven’s Reckoning. By resisting the urge to take the easy road and instead imparting valuable truths about stories and their place in racial and societal struggles, Baker and Hernandez transform Seven’s Reckoning into an instant classic.

Seven’s Reckoning #4 is now available at comic shops, on Amazon Kindle and Comixology.