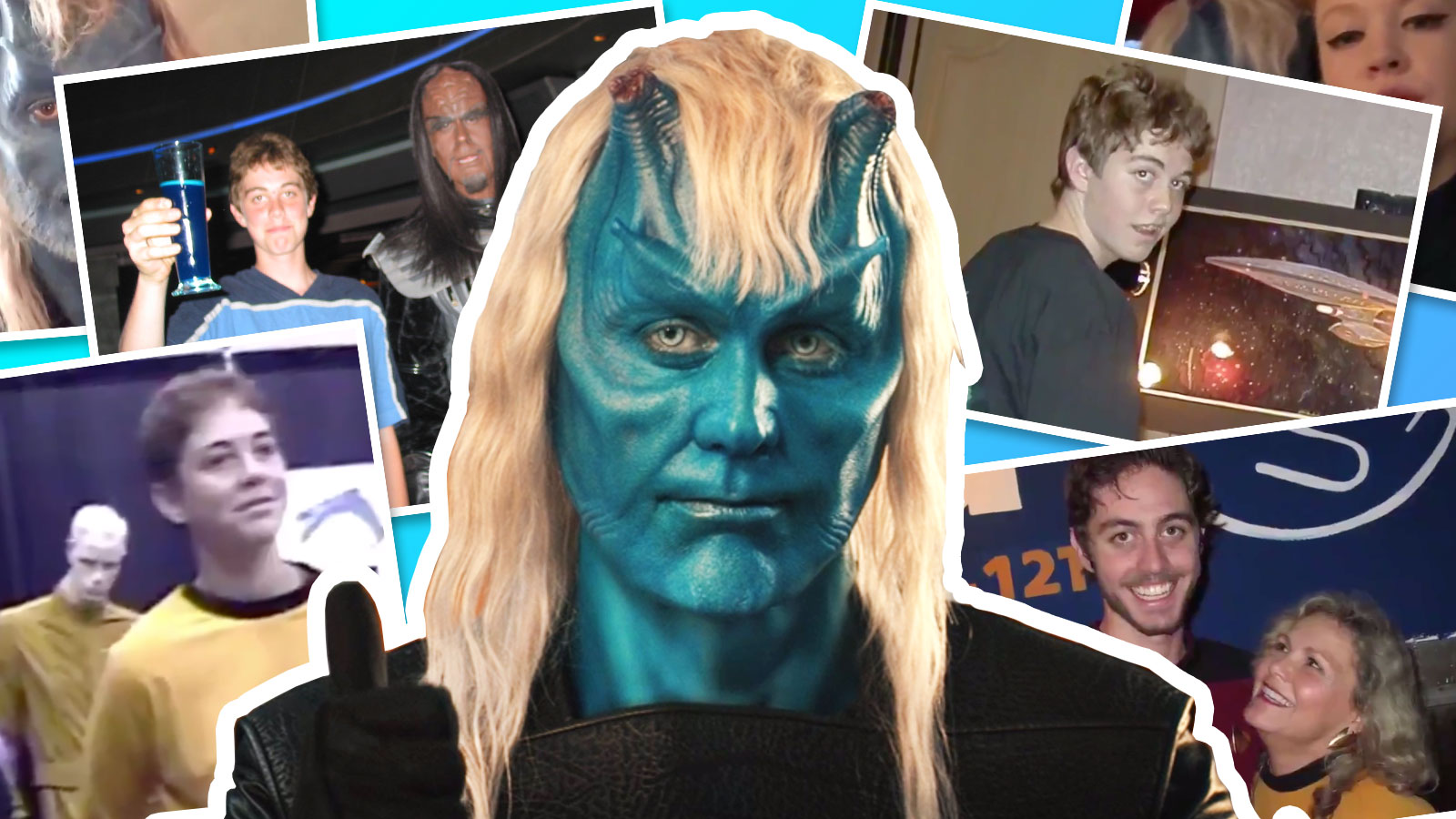 The fantasy of being part of the thing we love is so commonplace in many aspects of pop-culture fandom. Whether you grew up running around the backyard dressed as Captain Kirk, dreamt of what it would be like to sit down for a drink at Quark’s Bar on Deep Space Nine, or wondered what it would be like to be on set with Star Trek legends like Jonathan Frakes, being part of the Star Trek universe is something we’ve all at least pondered. That fantasy recently became a reality for California-born actor Noah Averbach-Katz—who appeared as Ryn in the Star Trek: Discovery third season episodes “Scavengers” and “The Sanctuary”.

Averbach-Katz recently sat down (virtually) with TrekNews.net to discuss his Star Trek journey that began as a lifelong fan to being cast as an Andorian on Discovery.

We’ve heard you’re a big Star Trek fan. Tell us a little about how you got into Star Trek, your favorite films, favorite series—outside of Discovery, of course—and your favorite episode(s).

My mom was the one who got me into Star Trek. It was just on in our house ever since I can remember. I think Voyager was the show that was on when I was growing up but the first show I really watched episode-to-episode was Enterprise, which might not be the popular choice but I think it is probably my favorite. In a lot of ways it’s so campy and weird and leans into goofiness but also has a real heart and soul to it. It’s a show that probably could never exist today. Also, another less-popular choice but man that first J.J. [Abrams] film [2009’s Star Trek] is just undeniably good.

Did you go to any conventions growing up? Do you have any memorable celebrity encounters or moments that really stand out?

I did go to conventions growing up. My mother would half-drag me but I was also really excited to go—much like any other teen. I remember how fun and goofy those days were and how much fun my mother and I, along with friends that joined us, would have. It was just such a different experience and so out of the norm that it was just very very fun. I think the most memorable moment for me was at the 2013 Creation convention in Chicago, my mom finally caved and bought a family photo op with Patrick Stewart. After we took the photo, my mother just started crying and we had this really sweet family hug that’ll I’ll never forget. I think at the time it really felt like the zenith of her “Star Trek life.” Looking back on it now it was just the beginning!

So many of us love to collect Star Trek merchandise; uniforms, badges, toys, artwork, and thousands of other products. Do you have a Star Trek collection? If so what’s your favorite piece?

I love having things that I can secretly use in my day-to-day life, so right now I’m using a very subtle Niners hat [from Deep Space Nine] that I love very much. I think what I really need in my life is some Star Trek-themed dice for Dungeons and Dragons!

Did Star Trek have any influence on you wanting to become an actor?

In a weird way, it really didn’t. When I was actually becoming an actor, the Star Trek brand was at a real lull. The new movies had somewhat fizzled out, and there was nothing on the horizon. So there was no way for me to even envision pointing my career in that direction. Although, now that I’ve been on the show [Discovery], I have no idea how I’m going to top this experience. I may have peaked too early!

Let’s switch gears to talk Discovery, in which you play the Andorian Ryn — how did you come to be on the series, and what was the audition process like?

I was actually in Toronto with Mary [Wiseman] and flew back to New York to audition for the show. I think there was something about knowing the genre and Star Trek so well that really helped me in that setting. Being able to match the tone and style right out of the gate is just such a huge advantage. People can immediately see you in the show and in the Star Trek universe. They don’t have to worry if you’re going to get it or not. Just being so familiar with what is expected from someone on Star Trek and more specifically from someone the viewer is meeting in the middle of the story. I think that just helped me feel really confident in the audition.

Did you ever feel like you had to hide elements of your Star Trek fandom during the process? What about on set?

The exact opposite, actually! Everyone on set loves Star Trek. They love the fans, they love all things Trek. Everyone from Alex [Kurtzman] and Michelle [Paradise] to the directors, including Jonathan [Frakes], to the boom operator, was just so excited for me. I think everyone got to live vicariously through me in a really fun way. Whether you’re a fan of Marvel, a football team, or a band, it’s such a ubiquitous dream to be a part of the thing you love. So I think people could really relate and have fun with how much fun I was having.

In what ways did your fandom influence your portrayal of Ryn and your approach to the character?

Well understanding the genre was so informative. Implicitly knowing that you can get away with something like a deadpan thumbs up in this world really allowed me to make choices that were big and fun but also don’t feel out of place. And the reverse is true, as well, something that I think Patrick Stewart is the master of – knowing that there is going to be so much happening visually on screen, with the costumes, the prosthetics, and the technology being able to ground a moment in simplicity can really help tie all those elements together and make things feel real, in an otherwise unreal setting.

Aside from Mary, who have you bonded with on set, and what’s that experience been like?

I’ve had the chance to spend so much time with the entire cast over the past few years, both as an actor and as an actor’s husband. I love them all dearly. A lot of them were able to make it to our wedding! It’s truly an incredible group of people who treat each other with such care and respect. I think it’s incredibly rare and also incredibly special. The sense that the fans understand that these people like each other, respect each other, know each other, and love each other is the real deal.

On Discovery, you work with your wife, the talented Mary Wiseman—what’s it like working on the series with your significant other, and to that, being a Star Trek couple?

I can’t speak for her but I’ve had so much fun. We hadn’t acted together for a year, and when we did our first scene together, I couldn’t believe how relaxed and natural she was. I was totally intimidated. It’s also been great to be able to put things in context for her. I’m very interested in this show’s legacy, in this cast’s legacy, in Alex, Heather, and Michelle’s legacy. I think Star Trek fans are unbelievably lucky to have these people at the helm of the property.

The most recent episode you’ve appeared in, “The Sanctuary,” was directed by Jonathan Frakes — who is, for all intents and purposes, Star Trek royalty. What was it like working with him, taking into consideration your years of watching him on TNG growing up?

It was unreal. I was so so nervous for so many reasons but he was just as incredible as everyone hopes. He was kind and collaborative and on top of it all just a brilliant director. He gave me so much permission to do my best, to try things, to have fun. I couldn’t have had a better experience

What surprised you most when you got to the set that you weren’t expecting or imagined differently before you got there?

Well, I had been on set [with Mary] many times, prior to working on the series as an actor but I think what surprised me was how easy it was to get lost in the moment. I always thought with all these big sets and lights, explosions, heavy costumes, and make-up, it would be hard to really feel like you were in the moment as an actor. But it was totally the opposite—it really felt like I was a kid playing make-believe and I just got to have the best toy set in the world. It was so easy to get totally lost and really feel like you were there, on the bridge facing down the bad guy. It was just an incredible feeling.

In a lot of ways, it feels like we’re in the middle of Star Trek’s second major resurgence, with multiple series streaming and others in various stages of production — what’s it like knowing your part of that, and forever ingrained into Star Trek lore?

It was beyond a dream come true. To get to be a part of this story and to make an impact in the Star Trek universe at all—it’s an unreal feeling, and I truly can’t describe how lucky I am.

Noah, thank you so much for joining us. It was a great conversation.