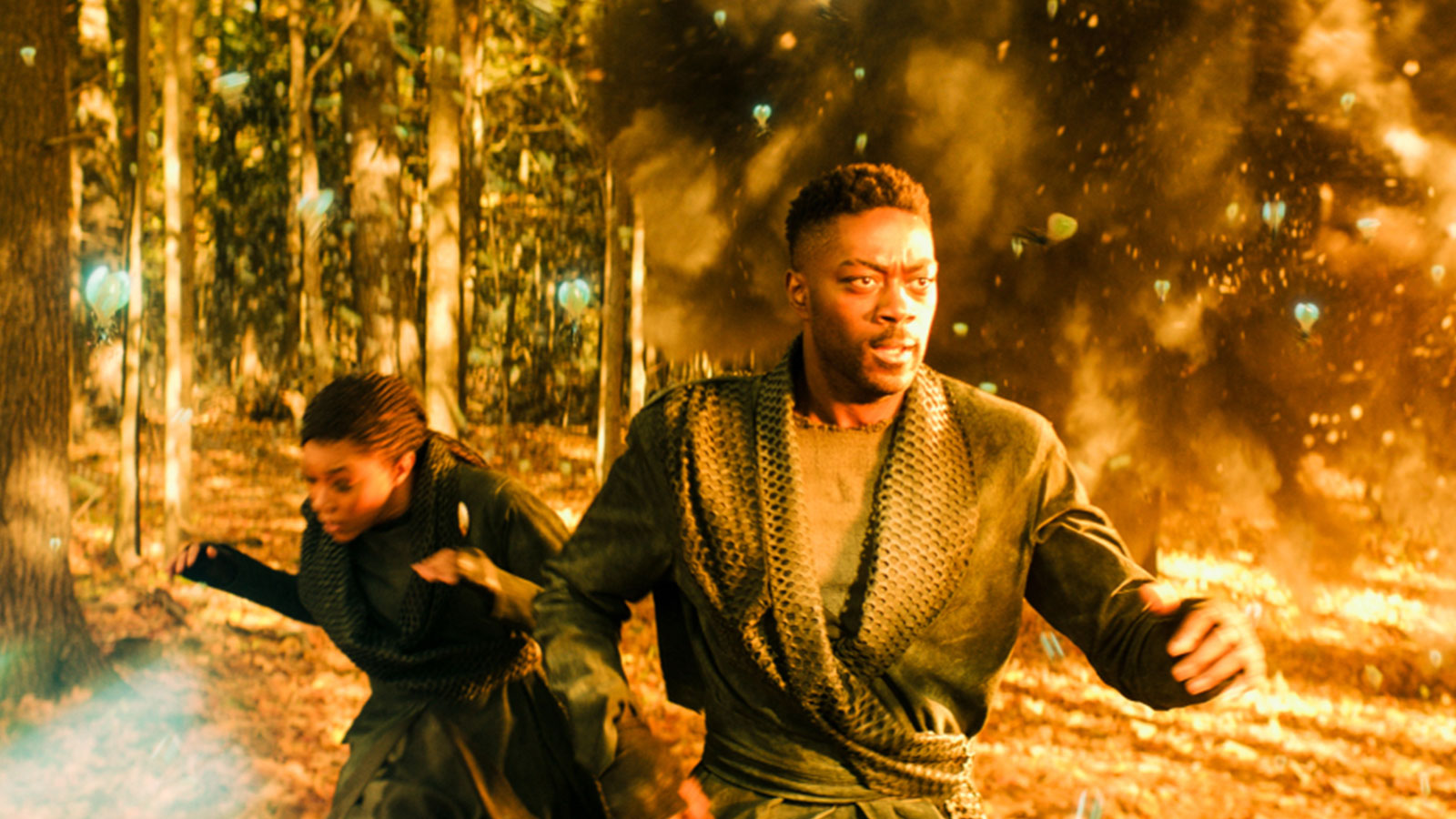 This Book-centric episode brings Star Trek: Discovery to a new planet to face a new foe while our resident courier faces not only a plague threatening his homeworld but a long-festering relationship with his brother. Oh, and Discovery discovers the source of the Burn, but we’ll have to wait for the next episode to see that.

Harkening back to the jailbreak episode “Scavengers,” we are reminded that Book (David Ajala) rescued his antenna-less Andorian friend, Ryn (Noah Averbach-Katz) from the Emerald Chain and its newly revealed leader, Osyraa (Janet Kidder). Now, Osyraa wants Ryn back for some mysterious reason, and she’s willing to face off against Discovery to get him. Both ships encounter each other over Book’s homeworld, Kwejian, after Book received a message from his estranged brother, Kyheem (Ache Hernandez), who says the planet is overwhelmed by a type of locust.

That’s a lot to take in, and Discovery continues its pattern of overloading the episode’s opening scenes with exposition, requiring a hyper-attentive viewer (and perhaps closed captioning enabled) to fully take in the scene. There’s nothing specifically wrong with this method by the show’s writers, just something we’ve come to expect from this show. Luckily, director Jonathan Frakes, in his second of three directorial efforts of this season, handles this episode with his typical finesse. Moving on!

In what is essentially an amusing take on the typical relationship trope of the guy bringing his girlfriend home to meet the family, Burnham witnesses how the time since Book’s departure from his homeworld has negatively impacted his relationship with his chosen brother. IN short, Kwejian has allowed itself to become subservient to the Emerald Chain in exchange for help fighting a locust infestation on their planet, and this brings Book and his brother at odds.

Back on Discovery, Saru must balance the delicate scale between protecting Burnham and Book from Osyraa, while maintaining the observational role the Discovery is playing as a representative of the Federation. When things turn south and Osyraa starts bombarding the shield that protects Book’s home, the creative solution the crew comes up with is to have one of them take Book’s ship, still parked in Discovery‘s hanger, and distract and disable Osyraa’s ship. Kayla Detmer (Emily Coutts) is the perfect fit, as her nimble flying ability lends itself well to the mission. Ultimately, Detmer uses the assignment as a sort of stress reliever, which is sorely needed following her unusually aggressive mental state since this season began. It’s great seeing a secondary character get so much screen time, and in a neat moment that harkens back to Riker’s use of a manual steering column on the Enterprise-E in Star Trek: Insurrection, Detmer activates the manual mode on Book’s ship. With two hand paddles in her grasp, Detmer weaves around Osyraa with ease, allowing time for Book and Burnham to resolve the conflict on the planet below. In a nice little coda to Detmer’s mission, we see her sitting in the mess hall with her friends, excitedly retelling the story of her attack. Does this mean her psychological problems are solved?

Osyraa realizes she is defeated and warps away, assuring the Discovery crew that they’ll cross paths again. Up until this episode, the Emerald Chain was feeling like a fairly bland pirate group, especially compared to villains of the show’s past, so the introduction of a ring leader is welcome, if not a bit overdue. Osyraa doesn’t have a whole lot to do in this episode that gives us a sense of what Kidder brings to the character, but we’re looking forward to seeing more of her, and how her secret that she and her gang are running out of dilithium is going to play out.

Once Osyraa warps away, Discovery is free to use an energy beam directed at the planet below to help amplify Book and Kyreem’s ability to communicate with animals to rid their home of the locusts. This healing process for their planet also serves as a healing process for the brothers, and soon enough the two are on friendly terms again. In a conversation between the two near the end of the episode, Book explains how Kwejian may be his home, but Discovery is where he wants to be. That’s where positive change is happening, and of course, that’s where Burnham is. We’ll probably be seeing a lot more of Book in the latter half of this season than in the first half, and that’s only a good thing.

We see more movement on Georgiou’s (Michelle Yeoh) side story about her somehow becoming disconnected from this universe – that’s the only way we can describe it, as we see her examination in sickbay by Doctor Culber (Wilson Cruz) produce some wild imagery. At one point, Culber is taken aback by Georgiou’s face as it seems to warp out of place and into some freaky geometry. It’s weird, and we can only guess – as can Culber at this point – what exactly is going on with her. To Georgiou’s credit, she remains at the top of her badass game as she externally does not appear vulnerable to the frightening medical condition, but internally we know she is scared and likely desperate for help. When will she drop her shields and lean on others to solve her condition?

Perhaps the most key aspect of this episode is the exciting development in engineering. Saru, Tilly (Mary Wiseman), Stamets (Anthony Rapp), and Adira (Blu del Barrio) work in Discovery‘s lab to analyze a signal coming from what they determine is the source of the Burn. The signal sounds like the same tune Burnham heard on the seed ship in “Die Trying,” and what Adira is able to play on her instrument thanks to Gray’s knowledge, but there’s more. A Federation distress call is hidden in the signal! It’s an intriguing mystery that leaves us super excited for the next episode.

We can only guess which Federation starship is at the heart of the nebula that is the source of the Burn, and we can only guess what Georgiou’s condition means for her and the rest of the crew. If there’s one thing Discovery‘s writers are good at, it’s keeping us wanting more, so we can’t wait for next week’s episode “Terra Firma, Part I.” That’s ultimately how this episode will be remembered – as a stepping stone to something bigger and greater.