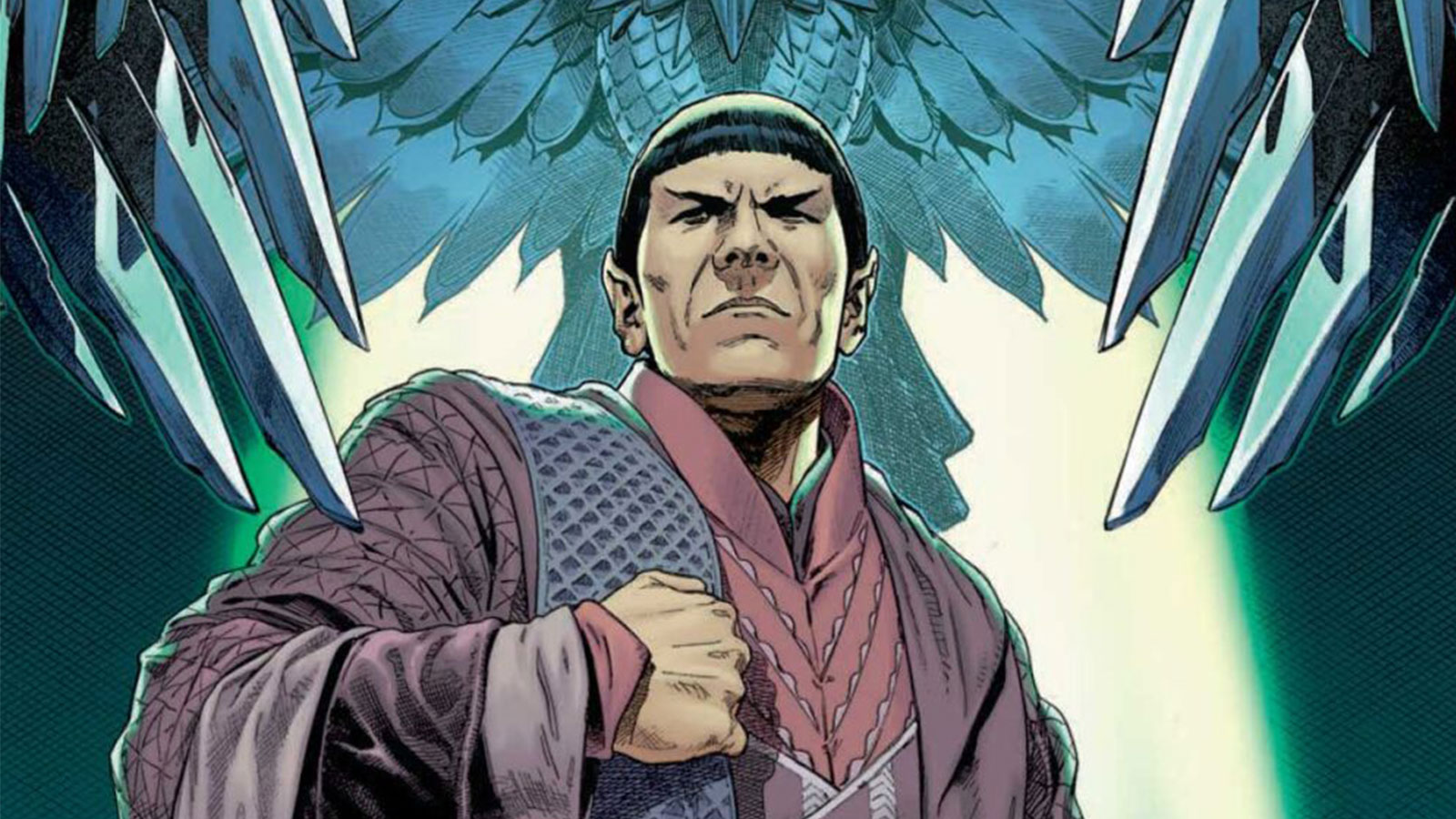 On the final leg of their journey home, the Enterprise’s friendly Tholian Bright Eyes reports hearing a repeating signal from the surface of Vulcan. A landing party steps on the planet to investigate but things quickly go awry when a bright flash of light swallows Spock and spits him back into a pivotal moment in Vulcan history.

Here we are, ladies and gentlemen, so close to the end of all things Star Trek: Year Five. I’m hard-pressed to think of a Star Trek comic book series that changed the franchise’s comic fate more than Year Five did. When the first issue came out over two years ago, few, myself included, were skeptical that the ambitious stretch of twenty-five issues would ever come to pass. Trek comics, despite being every bit as good as them, don’t sell like a big two’s (Marvel and DC) featured comics, which is something IDW doesn’t just seem to know but has turned into an advantage. Most Star Trek comics in the last few years have been miniseries — three to five issues long — so the books can have a short and sweet run before being converted into trade paperbacks, which is where most comics make their money these days. Longer running series that don’t feature flying aliens or vigilantes dressed as bats often don’t sell well. But the round-robin table of Year Five creators, led by the creators Jackson Lanzing and Colin Kelly, has defied all expectations, by betting on the quality of their storytelling skills. Not only have the single issues gotten better as they progressed, their sales have gradually gotten better as well, showing IDW that there are still legs left in Trek comic books that burn slowly but brightly.

With just five issues left, Year Five is showing no signs of stopping. Speeding toward Earth on their homeward-bound journey, Enterprise’s Tholian friend Bright Eyes, who we met all the way back at the beginning of Year Five’s tale, picks up a signal anomaly on Vulcan. Spock is apprehensive as the ship has not picked up this signal, but nevertheless, they assemble a landing party and land on the planet. Moments later, a fiery explosion of light takes Spock away from the crew and drops him in the middle of nowhere.

Spock quickly deciphers, upon running into an army of Vulcans, that he has been thrown back in time, in the middle of a battle that has gone down in Vulcan history as one that changed the course of their very civilization.

Brandon Easton, who previously also tackled Spock’s presidential aspirations returns to pen this Spock-centric story. Easton is, pardon the pun, fascinated with Spock, and seems to be the team’s go-to Vulcan writer. While in the previous arc he dropped Spock in the middle of a governmental quagmire, this time he compels Spock to confront Vulcan’s own history, a history that Spock holds in high regard, perhaps too high at times.

There’s quite a bit of humor considering the dark turn the story takes rather quickly. Easton infuses levity easily into a story that reexamines Spock’s trademark trait: his abstinence from the expression of emotion. It’s a quality we’ve come to love about Spock and one that we know so well that we never ask what it took for a once emotional people to suppress that side of theirs. The setup is intriguing, and after eating up his previous Year Five run multiple times, I expect nothing short of a spectacular payoff from Easton.

But when you pick up a book whose cover shows Spock wearing ancient Vulcan robes, you know you’re buying something that features him front and center. It’s no easy task drawing Spock because he is a character on almost every page of this book and yet his expressions by design barely change. Califano’s pencils and Alonso’s colors use subtlety and clever lighting to make him engaging. All the history and sciencey stuff happening around him is just a bonus.

Year Five 20 does not feature a ton of heart-stopping action or head-dizzying movement, but the conflict set up by Easton and Califano’s radiant art is more than enough to deliver the first half of a powerful and intense story.