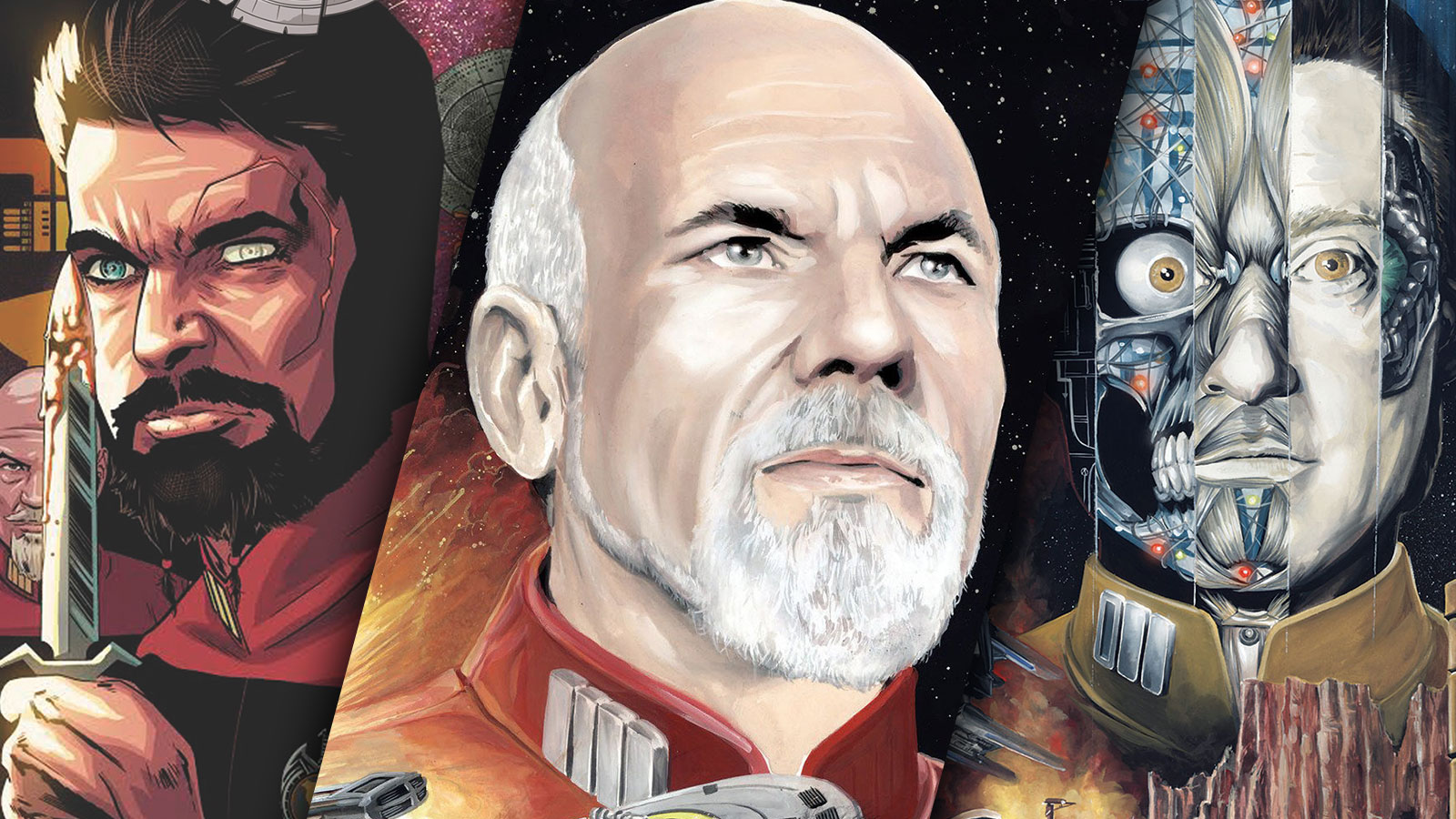 Swimming in the deep endlessness of space in the Mirror Universe is the I.S.S. Stargazer, one of the few surviving ships of the Terran Empire. A frustrated, power-hungry Jean Luc Picard and his crew are tired of being ignored by Emperor Spock’s government. When rumor breaks out about a resilient new Galaxy-class ship better than even the vessels of the Klingons & Cardassians being developed by the Empire, Picard realizes that this is the perfect weapon he needs to finally take down the current regime and decides to acquire it by any means necessary.

Welcome to Star Trek Reflections, a continuing series on TrekNews.net that will look back at some of the best comic series Star Trek has offered. Its current mission, as the new comic book series STAR TREK: MIRROR WAR approaches is to break down the stories of the Mirror Universe’s TNG crew, to discover what makes them special, to boldly celebrate what you might not have read before…

It was an exciting time to be a Star Trek fan in the early days of 2017. Star Trek Beyond had left theaters recently and Star Trek was coming back to TV with Star Trek: Discovery’s first season on the horizon. Excitement was high in the comics front as well: the Kelvin crew was continuing their adventures in a continuing series and multiple crossovers, the TOS crew left on a high note after a recent visit in the form of Harlan Ellison’s script-to-comic adaptation “The City On The Edge Of Forever” but we hadn’t seen the TNG crew in a while. Just when things were getting too quiet, IDW Publishing dropped a bombshell announcement: the TNG crew was returning to comics and led by comic veteran writers David Tipton and Scott Tipton and rising star artist JK Woodward, it was heading to the Mirror Universe! The Tiptons had written Star Trek comics since IDW had acquired the license almost a decade ago and Woodward had built an impressive resume by delivering dozens of jaw-dropping covers on various Trek and non-Trek titles for IDW. The trio was also behind “The City on the Edge of Forever” (which, according to Woodward, is his favorite work) so there was a lot of promise. But could they live up to the sky-high expectations of fans who had been hungry for decades for a peek into the TNG Mirrorverse?

We’d find out soon enough because the five-issue miniseries titled Star Trek: Mirror Broken would begin in June 2017, with a special prelude Free Comic Book Day issue dropping in May.

Jean Luc Picard of the I.S.S. Stargazer just cannot take it anymore. The Empire is strictly in maintenance mode, the glory days of its reign are long gone, and ambitious people like Picard are constantly ignored and undermined by the government. Decades of this cowardice have led to a broken, crumbling scattering of kingdoms, a far cry from the titan of terror that owned this quadrant.

Picard believes his luck is turning around when the Stargazer spots and successfully captures a Cardassian vessel. His dream is quickly shattered when he and his crew bring it to Utopia Planitia but are laughed out of the place for their efforts. However, thanks to a savvy Data, Picard learns that the Empire is secretly building what could possibly be the most powerful ship ever constructed: the I.S.S. Enterprise.

Mirror Broken‘s story starts in an intriguing place for Picard. In TNG we see Picard in a mostly content state of existence. He yearns to be continuously great at his job and be the captain his crew needs him to be but in the universe he’s in, the captain of Starfleet’s prized possession is a great place to be. In Mirror Broken, however, Picard is in the lowest echelon of the government elite. His ship is structurally a house of cards that could fall apart at any moment. The personality of Picard is also a dark mirror of his Prime Universe counterpart’s. His lust for power is toxic, his ambition is endless and his moral compass revolves entirely around himself.

Despite these differences, he has a crew that’s loyal to him, at least until their ambitions align with his. Every member of the crew utilized in this miniseries has a distinct purpose. There’s the android Data who owes Picard his life. There’s the bully Tasha Yar whose recklessness is only outmatched by her sadistic nature. There’s the introverted Barclay, quietly plotting a way to get to the top. Even with the ever-supportive Troi by his side Picard knows better than to fully trust anyone on the ship. Then there are those not on the ship but who can prove to be problematic. Like everything in the Mirror Universe, the relationships are a twisted reflection of their Prime Universe versions.

Then there’s the story the Tiptons tell in the six issues. From the setup of the main quest to the twists and turns filled sequence of events to the glorious third act, there’s not a single word or page that feels out of place. If this miniseries is viewed as the first season in a Star Trek television show’s run, it would be the best first season of all the shows. Sorry, you had to hear that, Discovery. The Tiptons retain the pillars of Trek storytelling while also honoring the evil nature of the Mirror Universe. They prove why they were the right people for this complex job. Having read most, if not all, of their Trek comics, I can safely Mirror Broken is their best work yet.

As evidenced by every single cover and page in this article JK Woodward’s art is quite simply the pinnacle of Star Trek art. I firmly believe, with all due respect to the artists that came before and after him, that Woodward is the best artist to have drawn a Star Trek comic book. Woodward draws and paints every page by hand and of all the franchises he could have chosen to be a part of, he chose Star Trek. This decision, and the person behind this decision, are credits to the Trek universe, and a blessing to us fans. Before Mirror Broken #0 came out I was a casual fan of Trek comics. They were entertaining but in my mind, they were in the third tier, well below comics from the “big two” (Marvel and DC), both in terms of writing and art. Reading that issue, being floored by the storytelling, and seeing that the art in it rivaled that of Alex Ross, another artist in the comic art hall of fame made a true believer out of me. Words in comics are ultimately sidekicks to the images and every image Woodward paints in Mirror Broken from the smallest panel to the largest splash is profound and haunting.

Every character in Mirror Broken also is drawn to highlight Woodward’s painting style because Woodward created this world from scratch. The TNG Mirror Universe comics have their roots in product marketing art made by Woodward for CBS years before Mirror Broken was released. Originally conceived as a product guide Woodward’s TNG Mirror Universe crew found a second life in the series and its eventual sequels, another twist in a line of events that would be a blessing for us readers.

The character designs, the ship designs, the space battles are all picture-perfect in Mirror Broken. Woodward’s pencils make you want to re-read the story immediately after you’ve finished reading it the first time. Woodward’s colors make you want to re-read the story on a bad day to make you feel better. It’s the art that holds in it a lifetime of labor and a lifetime of love for the artist’s heroes.

Incredible storytelling from writers David Tipton and Scott Tipton that makes every panel a masterclass in comic book writing and flawless art from JK Woodward that makes every page a work of art worthy of being hung in the Louvre come together to give rise to Star Trek: Mirror Broken, not just hands down the best Star Trek comic book series, but also one of the best comic book stories ever crafted in the vast history of the genre.