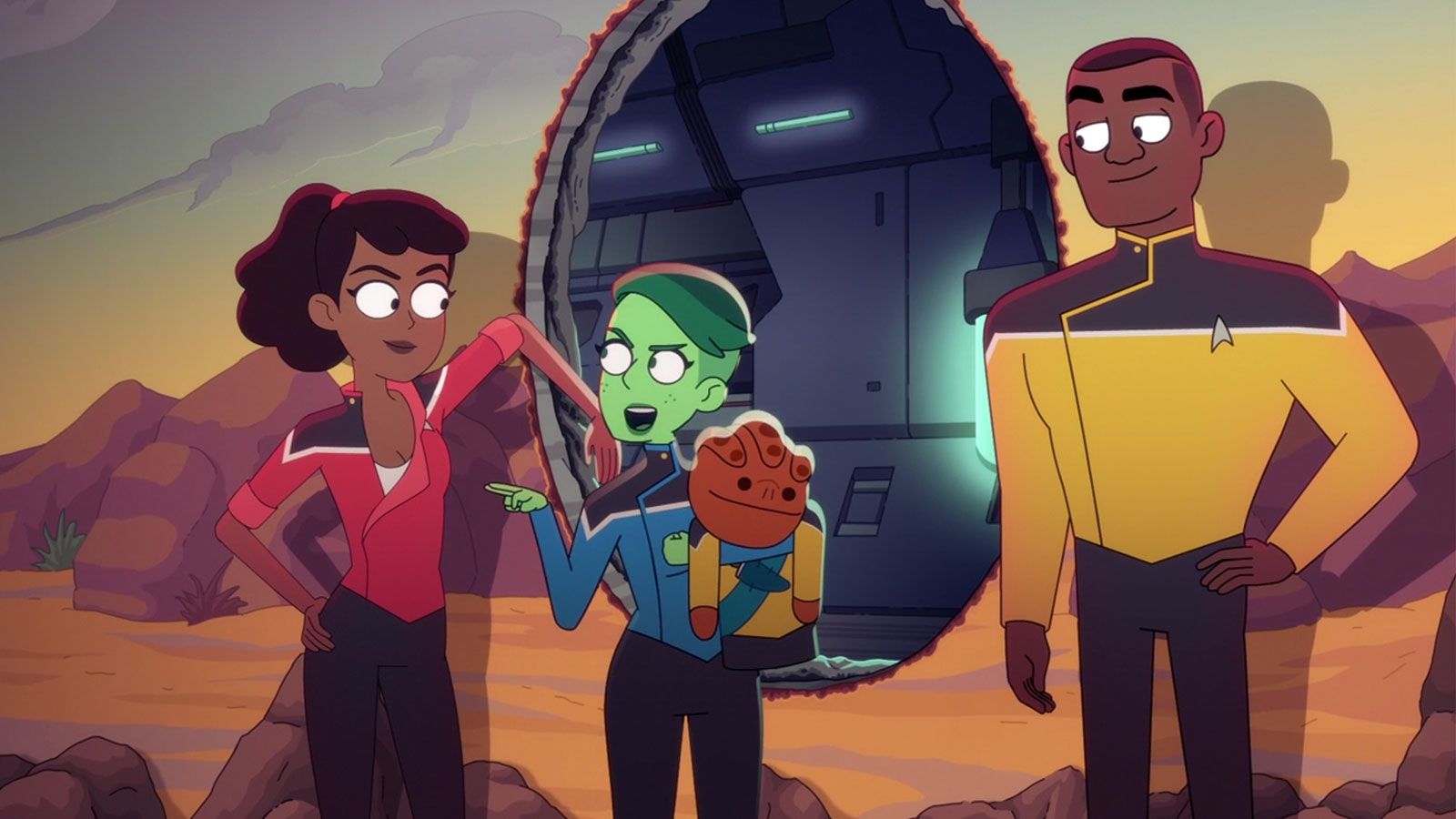 In one of the funniest episodes yet of Star Trek: Lower Decks‘ run, “Kayshon, His Eyes Open” has quite a few things going for it: a great new character introduction, more Titan action, and some notable character development for our Lower Deckers.

On-site to help secure a ship full of potentially dangerous collector items, the Cerritos beams aboard Mariner (Tawny Newsome), Rutherford (Eugene Cordero), Tendi (Noël Wells ), returning season one character Jet (Marcus Henderson), and the newest member of the Cerritos, the Tamarian Lt. Kayshon (Carl Tart). Kayshon is replacing the late Shaxs (Fred Tatasciore), who perished in the season one finale. This new group soon realizes the dangers onboard the collector ship, forcing them to think on their feet.

First, it’s no surprise that of all Star Trek characters, the classic, imminently parodiable alien such as the Tamarian from The Next Generation’s “Darmok” is pitch-perfect Lower Decks material. Series creator Mike McMahan and writer Chris Kula certainly do not disappoint in making good fun of the way Tamarians speak in allegory, and fans who are able to keep up with Kayshon’s dialogue will be chuckling the entire time.

The icing on the Kayshon comedy cake is actually what happens to him in this episode: he’s turned into a squeaky doll thanks to some… ahem, strange energy within the collector ship, forcing the away team to gingerly carry him whenever they are escaping danger. It’s a hysterical sight, and one can’t help but laugh at the hilariously morbid thought of poor Kayshon resigned to being a cute plushy doll.

Jokes aside, the away mission-turned-life-or-death-escape forces Mariner (and to a less important extent, Jet) to relinquish command responsibilities, as both crew members can’t develop an adequate plan to escape the vessel; Jet is too by the book and Mariner is too careless. This leaves Tendi and Rutherford to step up in a big way to save the away team, and we can’t help but root the entire time for the scientist and engineer when they take charge. Mariner, to her credit, happily follows her team’s plan, showing that while she may opt for a rough and tumble approach to command decisions, she is more than happy to let her friends explore their potential.

Letting crew members explore their potential is something Captain Freeman (Dawnn Lewis) tackles with this week, as she is trying to take a more hands-off approach to her command. Instead of checking in with the away team on the collector ship multiple times, as she would do normally, she doesn’t check in at all – all the better considering the dangers the team experienced. By the end of the episode, she seems set on retreating back to her micro-managing style thanks to one of her crew being turned into a puppet, but we hope she’ll get another chance to trust in her subordinates later in the season.

Meanwhile, far from the Cerritos, Captain Riker (Jonathan Frakes) and the Titan are campaigning against a growing Pakled threat. Boimler seems a bit lost in the new environment, as the Titan is mainly focused on intense action, not the lower-paced scientific or diplomatic endeavors he was used to on the Cerritos. The realization that the Titan isn’t where he belongs dawns on him when he and members of the Titan‘s away team are trying to escape a Pakled mining facility on Karzill IV. Faced against an encroaching enemy, Boimler monologues about how he is more suited to life on his former ship – and in the process delivers a speech espousing the non-combative ways Starfleet is awesome. Intended or not, it’s a great way to mark Gene Roddenberry’s birthday today.

In a flash of brilliance born from a reference to Riker’s transporter twin, Thomas (seen in The Next Generation and Deep Space Nine), Boimler creates a transporter copy of himself to escape the Pakleds. The result is a Boimler who wants to stay on the USS Titan and one (the original) who wants to return to the Cerritos. Thus, Boimler finally finds his way back to the Lower Deckers and a (mostly) warm reception. The gang is back together, but we hope this isn’t the last we see of the Titan.

Taken together, “Kayshon, His Eyes Open” is a remarkable Lower Decks episode. While the title may first only apply to the new Tamarian crew member, both Mariner and Boimler have their own “eyes open’ revelation, and we can’t wait to if these traits develop more during the season.