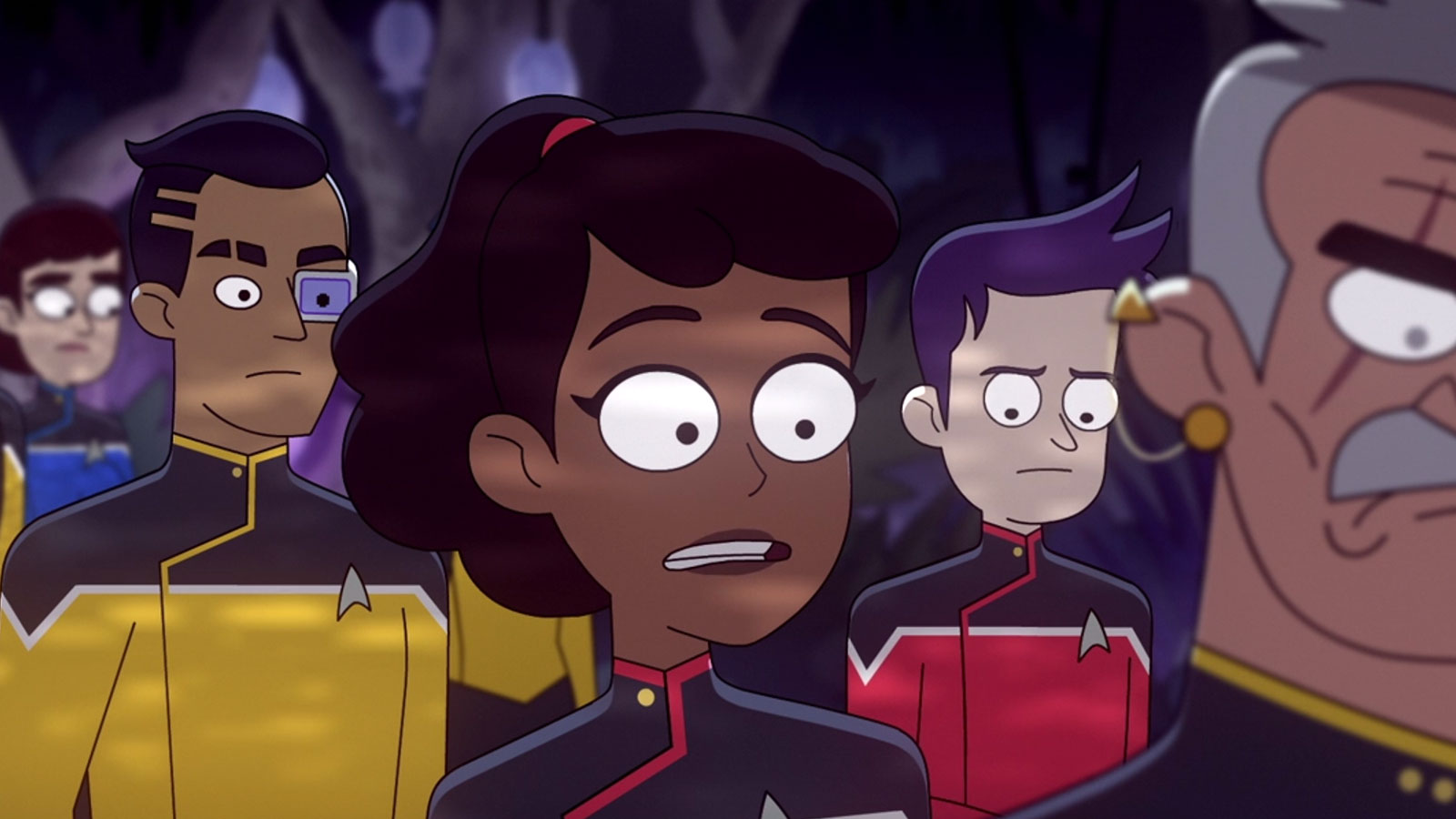 Beckett Mariner (Tawney Newsome) has always been an impressively skilled and somewhat mysterious figure, especially to people outside her fellow ensigns. But what if her mystique and unusual combat skills were the results of… being a secret Starfleet black ops member? That’s the mystery Rutherford (Eugene Cordero) and Boimler (Jack Quaid) face in “Mugato, Gumato” while the Cerritos’ crew must control a Mugato outbreak on Frylon IV.

The Mugato, of course, are no stranger to Star Trek. The Original Series episode “A Private Little War” features the creature prominently, and various references to the horned ape-like animal exist in other Star Trek shows. Here, the animal receives a lot of love, as the Lower Deckers try to stop Ferengi from enslaving the creatures and harvesting their horns.

The episode’s title, and the fact that the Mugato seem to have various pronunciations in this episode, refer to the fact that during filming of the aforementioned TOS episode, DeForest Kelley (Doctor McCoy) could not pronounce the original name for the Mugato, “Gumato,” so the name was changed to Mugato, which William Shatner and Kelley then mispronounced as “Mugatu.”

After witnessing Mariner’s unconventional combat skills firsthand, Rutherford and Boimler are apt to believe a rumor told to them by the Cerritos‘ bartender: Mariner is actually a Starfleet secret agent. It’s a plausible suggestion to the two ensigns, as Mariner is an unusually skilled “boots on the ground” type of officer, and she seems to be able to get away with things other Starfleet members couldn’t. Plus, the two ensigns discover that one of Mariner’s previous assignments, the U.S.S. Atlantis, suffered some sort of incident where half of her crew disappeared. The mystery deepens.

On the planet surface, Rutherford and Boimler get separated from the rest of the away team after the Mugato break out of their confinements and run rampant. The pair is given plenty of time to ponder the increasingly likely case that Mariner is an undercover black ops agent, despite a brief and hilarious distraction in the form of Patingi, a biologist who claims to have been studying the Mugato for years.

Ultimately, the two ensigns confront the would-be Black Ops agent, but Mariner admits that she started that rumor, and the reason totally makes sense: it’s a good way to prevent people from getting close to her. Her Starfleet career thus far has been across numerous ships without a stable group of friends. Rutherford, Boimler, and Tendi are the only ones who have gotten close to her, and so Mariner is actually disappointed that they would believe the lies she told about herself.

The best thing about this week’s episode is that Lower Decks paired Boimler and Rutherford together; just like last week’s “We’ll Always Have Tom Paris,” where Mariner and Tendi teamed up, it’s great to see Lower Decks explore the inter-relationships between the ensigns. We also loved that the solution Rutherford and Boimler arrived at for rescuing the hostages and removing the threat to the Mugato was not based in conflict, but rather diplomacy and business acumen. Is there a greater Star Trek message?

In an unsually weak b-story, Tendi (Noël Wells) is assigned by Doctor T’Ana (Gillian Vigman) to track down the remaining Cerritos crew members who have not completed their annual physicals. It’s a quick process, as Tendi only needs to scan them, but at the end of the list she discovers a mysterious entry: one crew member deleted their name hoping not to be scanned. Instead, this mystery person is identified only by a number. It doesn’t take Tendi terribly long to figure out who it is: Doctor T’Ana herself. Indeed, doctors seem to make the worst patients.

Our question is: did the doctor want to be caught? Because that’s the only explanation for such an ineffective cover-up. Why use your own ID number – the number that’s visible on the Chief Medical Officer’s office sign – instead of your name? Moreover, when Tendi was searching the computer for Patient 08.019, why didn’t she even incidentally discover the meaning of that number?

Moreover, Dr. T’Ana’s cat shtick is getting somewhat old, especially when she exhibits such typical cat behavior as she does in this episode. She’s a Starfleet officer, right? She probably knows better than to slash at an ensign (like a cat would when cornered), or play cat-and-mouse in Jefferies Tubes. If anything, this plot presents the doctor as somewhat of an egomaniac, as she can’t believe her own medical diagnosis of herself isn’t sufficient. And if she thinks her self-diagnosis is good enough, why not log that as her scan entry? Unlike last week, Tendi was short-changed this episode, and the one redeeming aspect of her role in “Mugato, Gumato” is that she gains quite a bit of self-confidence thanks to her completing the doctor’s task.

Taken together, “Mugato, Gumato” harkens back to a little-known piece of Star Trek production history to shape a mostly entertaining episode. While we weren’t thrilled with how the Dr. T’Ana/Tendi storyline played out, the events on the ground between the away team and the Ferengi speak well to a quintessential Star Trek message: it’s better to solve conflicts using your head than your hands.

Lower Decks returns next week with the fifth episode of season two “An Embarrassment of Dooplers” on Thursday, September 9th.