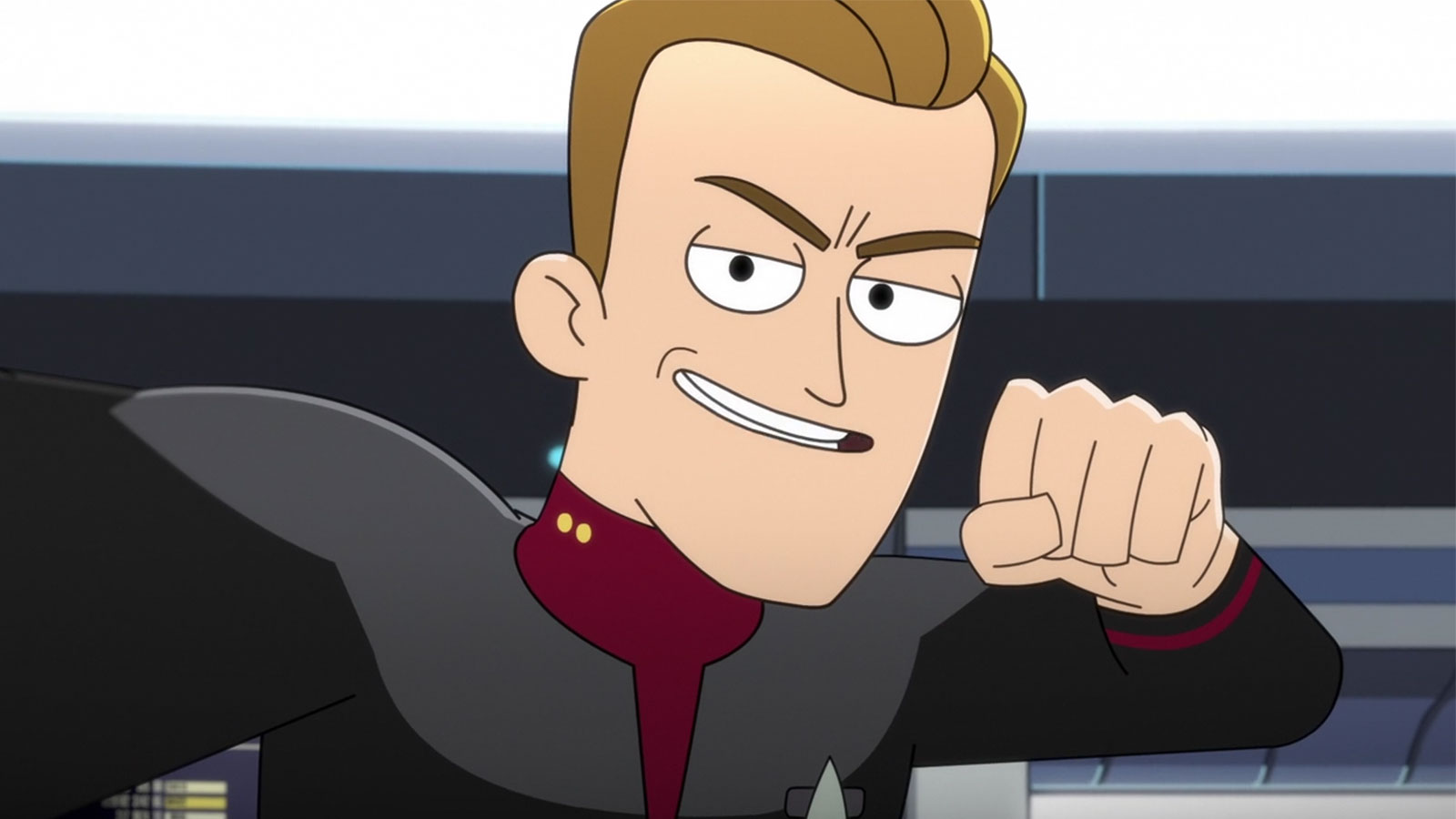 While it may not be as laugh-out-loud funny as its predecessor, “We’ll Always Have Tom Paris” throws fans some red meat in the form of a not-so-surprising cameo and an unlikely pairing, but suffers some uncharacteristic stumbles along the way.

Death is pretty common in Star Trek; what’s rare is when a major character actually stays dead. There were probably a few lower deckers on the Enterprise asking how Spock returned from the dead, and perhaps a few on the Discovery when Doctor Culber came back. In “We’ll Always Have Tom Paris,” Ensign Rutherford (Eugene Cordero) can’t help but obsess over how Shaxs (Fred Tatasciore) is seemingly alive and well despite his fate at the end of the season one finale. While other lower deckers brush it off as just another thing the senior staff won’t tell them, Rutherford needs to know, considering Shaxs sacrificed himself to save the ensign.

Ultimately, Rutherford does learn how Shaxs came back to life (all we know is that it had something to do with some sort of climactic battle at the Black Mountain, a spiritual battleground that Shaxs’ soul participated in after his death). Like the revived lieutenant himself, Rutherford is now haunted by the struggles one goes through after death. The concept raised by this storyline is thought-provoking: how would regular crewmembers react to knowing there were dark, post-death secrets the universe held? This is just another way Lower Decks takes a common Star Trek trope and puts it through its own unique filter, and for that reason, we think it’s the strongest part of this episode.

Meanwhile, Tendi (Noël Wells) and Mariner (Tawny Newsome) team up to fetch a family heirloom for Doctor T’Ana (Gillian Vigman) because Tendi wants to impress the senior officer. In what is likely a response to critique from season one that Lower Decks habitually pairs the Lower Deckers into Mariner/Boimler and Tendi/Rutherford teams (a critique we voiced ourselves), Mariner and Tendi are excited that they finally get to go on a mission together. In the process, they realize they’ve just been “people who work together” instead of friends. Some intense bonding time ensues when the pair accidentally break the heirloom and must try to fix it.

In this episode, we really enjoyed the continuation of this show’s effort to break the Orion stereotype, an effort we first saw in season one’s “Veritas.” In that episode, Mariner casts Tendi as a typical Orion slaver/thug in her holodeck program, much to Tendi’s chagrin. In “We’ll Always Have Tom Paris,” Mariner inadvertently (or not) casts Tendi in the same stereotype, which leads the Orion to forcefully rebut that characterization. We’re all for Lower Decks trying to dispel stereotypes via the lovable, innocent Tendi, but this episode’s anti-stereotype message is somewhat lost when Tendi, in the same breath as declaring that not all Orions are thieves and pirates, explains that her cousin, who works in a thief’s den in a pirate outpost, can help solve the pair’s problem. Even if it’s just for a quick laugh, why sabotage your own message in this way?

On the Cerritos, Tom Paris (Robert Duncan McNeill) arrives as part of a “handshake” tour telling “Voy stories” to help with crew morale. On his way to the bridge and detoured extensively by his lack of normal ship access, a disheveled Boimler (Jack Quaid) is mistaken for a Kazon by Paris. As Boimler drops through the bridge ceiling almost on top of the visiting lieutenant, Paris gets one of his sparse chuckle-worthy lines when he shouts “A Kazon!” and tackles Boimler. Although why Paris would keep attacking Boimler long enough to really ruff up the ensign isn’t quite clear; wouldn’t a bridge officer have stopped him, or Boimler himself says he was just an ensign?

We can’t help but feel a little disappointed by McNeill’s cameo, even though it’s certainly not the actor’s fault. The reason given for Tom Paris to visit the Cerritos doesn’t hold a lot of water (why would a famous lieutenant such as Paris visit the lowly Cerritos?), and McNeil isn’t used to much effect in the episode anyway. While we’re all for legacy Star Trek talent in Lower Decks, we rather not have such appearances feel forced. Such was certainly not the issue for Jonathan Frakes and Marina Sirtis in “No Small Parts,” or even John de Lancie in “Veritas.”

A couple of glaring items also stand out to us in this episode. Two clichés make us roll our eyes: one, when Mariner loses her green pigmentation at a crucial moment in their mission (why would that stuff be so temporary anyway?); and two, when poor Lt. Cody asks Shaxs about his revival just before Rutherford does, thus saving Rutherford from an embarrassing situation. In our review of season one’s “Envoys,” we praised the show for avoiding the “character-doesn’t-say-what-character-is thinking-because-another-character-talks-first-and-makes-the-first character-hesitate” cliché, and it’s a shame they succumbed to it in this episode.

We’re also a bit confused as to why Mariner gets angsty when Tendi doesn’t
know Mariner’s service history, when it’s clear from the beginning of the adventure that the two don’t know each other that well, something that their mission could rectify. Moreover, why would the two ensigns start fighting with each other in the pirate outpost as they both realize (again) that they don’t really know each other? It seems like a cheap, nonsensical way to manufacture conflict between these characters.

By the time this season concludes, we bet “We’ll Always Have Tom Paris” will rank below most season two episodes, but as usual, there is plenty of fun to be had with this show’s adroitness at inserting self-reflexive Star Trek references and jokes. For that reason, this episode is still enjoyable to watch, albeit not in the same caliber as most other Lower Decks episodes.