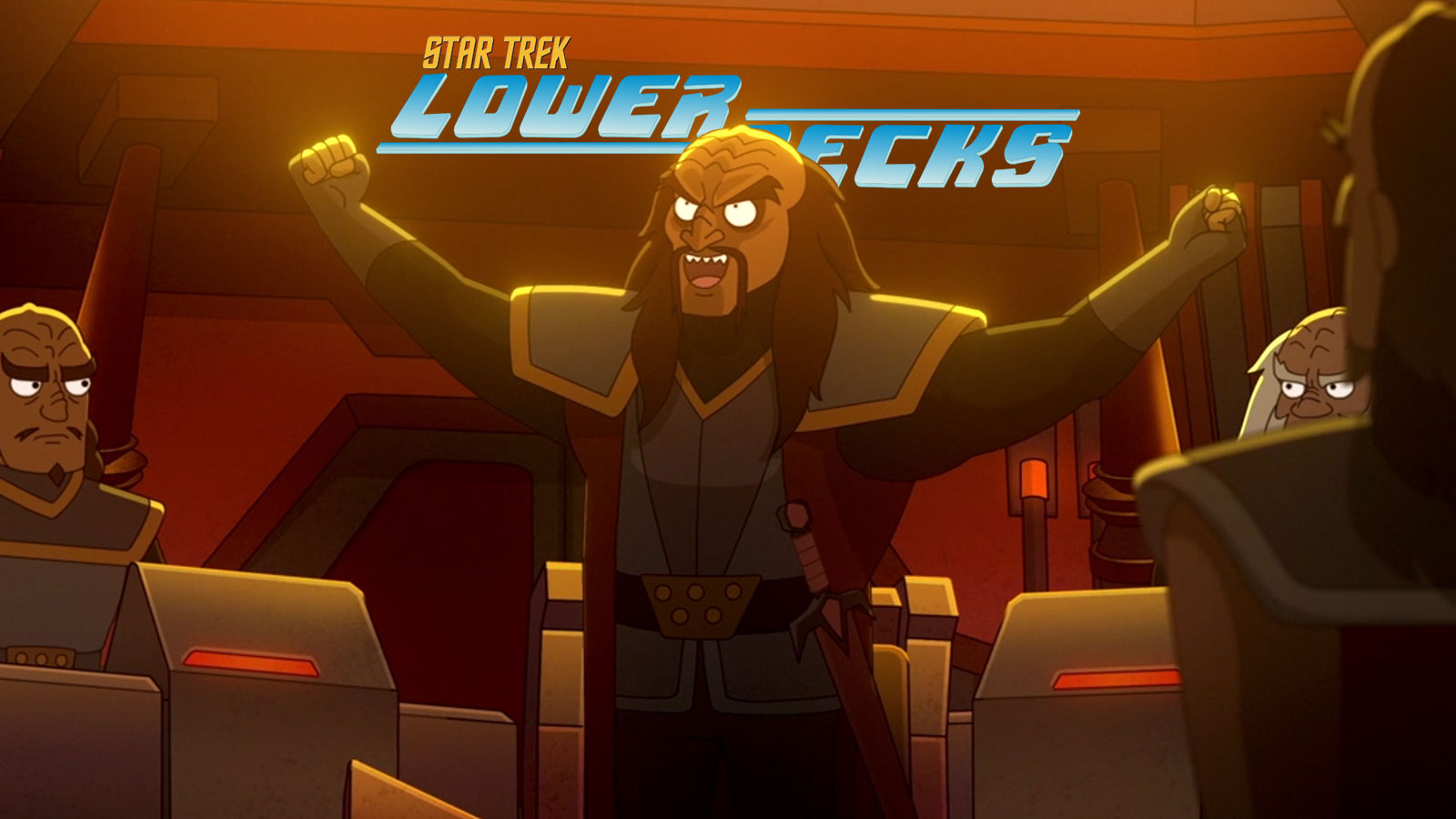 In its penultimate episode of the season, “wej Duj” (Klingon for “three ships”), Star Trek: Lower Decks breaks from its traditional narrative structure to tell the interconnecting stories of three vessels and how the actions of each ship’s Lower Deckers ultimately help reveal to the audience the true nature of the Pakled threat.

We’ve seen since the season one finale “No Small Parts” how the Pakleds are more aggressive than ever, and we’ve been left to assume that they were just adopting a more bellicose stance against the Federation. But, “wej Duj” exposes that all is not what it seems — with explosive results.

Thanks to a 12-hour road trip through the interstellar highway, the Lower Deckers have time to kill – and all except Boimler (Jack Quaid) have planned to do something with a senior officer. Mariner (Tawney Newsome) is busy “bonding” with her mother through an aggressive holodeck sporting event; Tendi (Noel Wells) is rock-climbing with Dr. T’Ana (Gillian Vigman), and Rutherford (Eugene Cordero) is making pottery with Lt. Shaxs (Fred Tatasciore). How could Boimler fit in with a senior officer during this long trek through the stars? He seems to be a perpetual outcast until he comes across Commander Ransom (Jerry O’Connell) talking with a couple other command officers about how great it was growing up in Hawaii. So, Boimler feigns being homesick for Hawaii to fit in with the group.

Meanwhile, the episode switches its narrative to a Klingon Bird-of-Prey, the I.K.S Che’ta, where M’ach (Jon Curry) is trying to take advantage of a recent first officer vacancy so he may one day serve at his captain’s side. But it’s revealed that the captain, Dorg (voiced by Colton Dunn, who delivers a stellar performance), is a jingoist and is angry that the Klingon Empire is seemingly a fraction as powerful as it once was. So, the captain is working with the Pakleds, knowing they crave power, by providing them with weapons and information to help them destabilize the quadrant. In his eyes, once the Pakleds disrupt the Federation and others, the Klingon Empire can come in and take over. So that’s why the Pakleds have been more aggressive since the season one finale!

“The empire used to choke the quadrant with fear, power, but now? We’ve lost our way.“
“The empire still strikes terror. Klingon blood runs as reddish-pink as ever.“

The third titular ship in this episode is a Vulcan ship, the Sh’vhal, where T’Lyn (Gabrielle Ruiz) is taking the initiative by trying to nail down the source of a strange far-away signal. Such initiative is unbecoming to her Vulcan crewmembers, who berate her for losing track of her other, seemingly more important duties by pursuing mere sensor upgrades. T’Lyn also faces flak from her captain for letting her curiosity get the better of her, but ultimately she is able to convince him to check out the signal. Vulcans sure don’t reward initiative, do they?

Back aboard the Cerritos, Captain Freeman (Dawnn Lewis) welcomes a chance to break from the long warp trek to check out a strange nearby signal. Upon arriving, however, the Cerritos finds a Pakled ship along with the Che’ta, and an epic engagement ensues. It’s thrilling seeing the lowly Cerritos get hammered from the looming Pakled ship while the more nimble Bird-of-Prey maneuvers between the two.

Just when the Pakleds and Klingons seem to be more than a match for the Cerritos, the Sh’vhal warps into the battle after following the strange signal to the Pakled ship. This four-ship confrontation is more bombastic than anything we’ve seen on Lower Decks so far. Kudos to director Bob Suarez for directing an exciting and fast-paced battle!

Thanks to the Pakled’s advanced weaponry, the battle starts to turn against our heroes, but not all is lost. On the Vulcan ship, T’Lyn alerts her captain to another side project she has been working on: a way to generate considerable more shield power. It’s a literal deus ex machina, and we can’t help roll our eyes at the convenience of it.

Meanwhile, on the Klingon ship, M’ach challenges his captain for the center chair, believing that Klingons should not have others fight for them and that it isn’t right to make an enemy of two allies. After killing Dorg, M’ach sets a course for the Klingon High Command to inform them of his captain’s unsanctioned actions. With one ship gone, the Vulcans and the Cerritos are easily able to make the Pakleds retreat – but even the Vulcans don’t stick around for very long after the battle, leaving the Cerritos to make repairs and assess the true nature of the Pakled threat.

We certainly have a few questions after watching this episode. In a way, “Three Ships” feels much like a season finale, as there is plenty of action, a supposed conclusion to the Pakled menace, and a few plot threads that we would expect to continue into the next season. The final conversation between Boimler and a new ensign, where the newbie seeks out Boimler for advice and Boimler asserts that the “real action happens on the Lower Decks” would also be super-fitting for a season or series finale. But… there is still one more episode left, and our lingering questions will hopefully be addressed there.

For example, thanks to T’Lyn’s initiave, she is assigned to a Federation starship, but we don’t know which one. Will it be the Cerritos or another vessel? And now that the Pakleds have lost their suppliers, we’re assuming they are no longer a threat… but their Pakled Clumpship did escape the battle, so we totally expect to see them again. And we want to know more about the honorable M’ach and how his return to the Klingon High Command goes, and if there are any ramifications for Dorg’s plot. As it is, we’re excited to see what next week’s season finale has in store, and if “wej Duj” was an explosive preview of more explosive things to come, or if the season finale will be a more mellow episode that ties up these remaining plot threads.