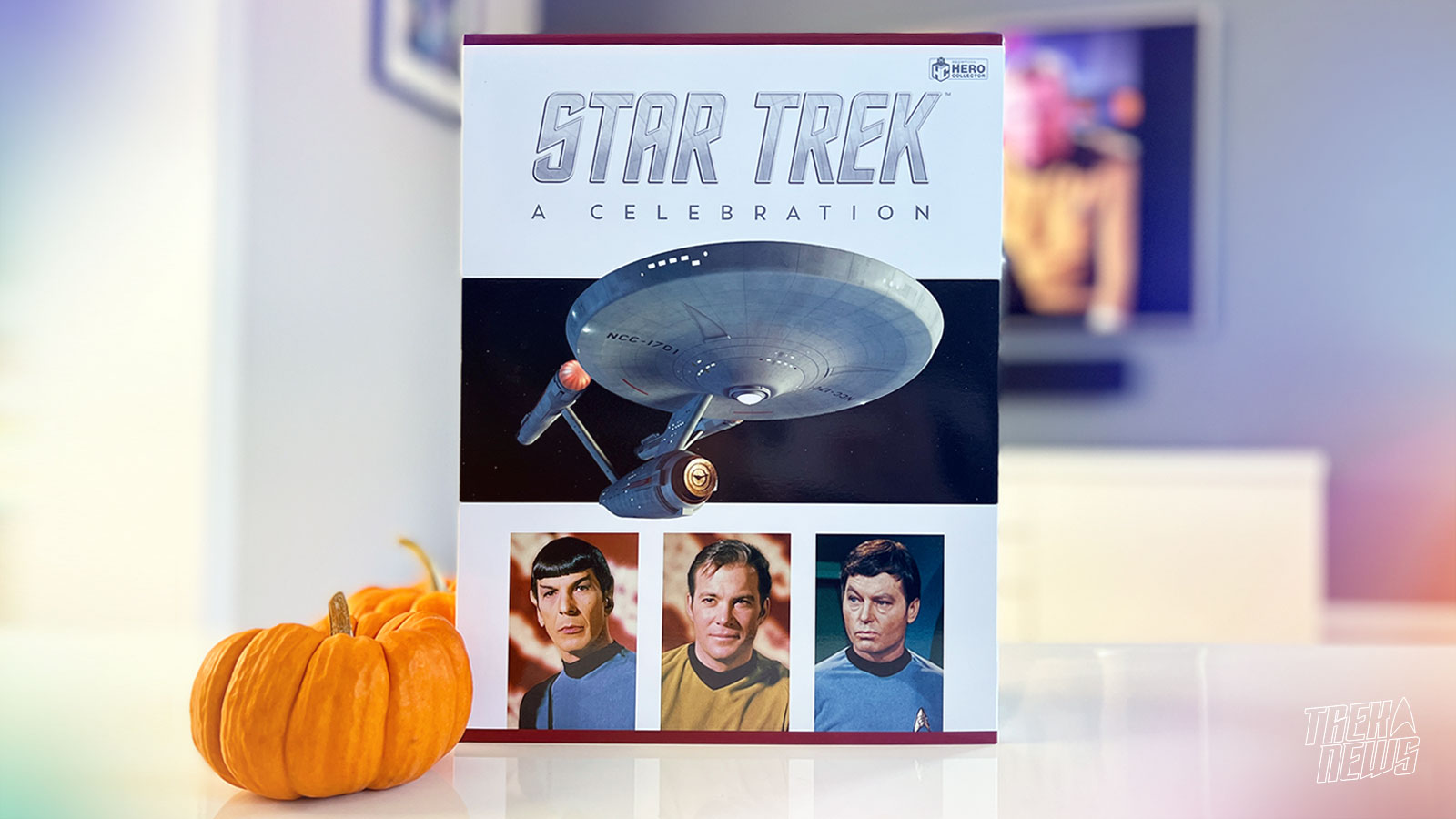 My bookshelves are ground zeroes for chaos. There is no rhyme or reason to the way they’re organized. Periodically I will get struck by the lightning of discipline and set them up in alphabetical order but within a few weeks, thanks to my constant loop of pulling them out and shuffling them back in, they end up in an order that made even less sense than before I organized them.

Now add to this pandemonium the Eaglemoss/Hero Collector books. They are different beasts altogether due to their size and weight. Each of them looks like the Crystalline Entity when compared to the Class-D starship of the other books on my shelves. In the past, I have arranged the Eaglemoss row of books alphabetically, by release date, by the franchise. After reading Star Trek: The Original Series – A Celebration, I finally have an ultimate order for these books.

The first thing that stood out to me about TOS: A Celebration is its bright white color scheme. Also used for the Voyager: A Celebration book, this is a departure from the usual black palette used for their Illustrated Handbook series. It’s the right call for a book that’s meant to celebrate The Original Series. Measuring roughly 9″x12″ and at a whopping 256 pages, the book is a brick. It functions both as a reading companion or a weapon if you’re beamed down to a hostile planet. The pages and the cover have a smooth finish and feel incredibly soft to the touch. The front cover is graced with the TOS Enterprise on the top and the series’ holy trinity – Kirk, Spock and McCoy – on the bottom. The back cover features a collage of the entire crew along with two other supporting characters from the show and a blurb of what the book is about. It’s the definition of a great cover because looking at it you know exactly what you’re getting in the pages of the book.

The contents section of Star Trek: The Original Series – A Celebration lays out nearly seventy chapters, most of them spanning two to four pages long each, with a few running eight pages long. There are chapters like Wagon Train To The Stars, a breakdown of how the idea of The Original Series traveled from Gene Roddenberry’s mind to a pitch document that would be a prelude for a landscape-changing television show. Chapters are also dedicated to specific characters of the show, like the well-known Dr. McCoy and Chekov and the lesser-known Yeoman Rand or Harry Mudd. There are also chapters about landmarks that the show has birthed like the Tricorder, The Enterprise, and VFX of the show. Along with a bountiful cornucopia of these chapters TOS: A Celebration also throws in a Q-turn with the Key Episodes chapters. These are about specific episodes like Space Seed and Mirror Mirror, providing a time capsule of sorts as we learn about the ideas and themes of these episodes, what led Roddenberry and his team to make specific casting decisions, and where the show was creatively at the time of the making of the episode.

Each chapter is a mix of commentary from veteran writers Ben Robinson and Ian Spelling, interviews both new and old done by the duo with many of the show’s main actors and guest actors along with snippets from interviews and paragraphs from other publications. I was pleasantly surprised by how the flow from Robinson and Spelling’s narration to the snippets from other books never felt disjointed, especially those sections that had thoughts from the many key players of The Original Series who have passed away. Robinson and Spelling didn’t have the luxury of requesting new words from them. Instead, they had to rely on stitching together narratives using pieces that are decades old at this point. Whether they wrote their part of each chapter after selecting those snippets or it was the other way around, the result flows without any hiccups. It’s clear that the duo handled the burdensome task of balancing their thoughts with the assortment of blurbs with great care.

Each chapter is also filled with incredible photos, most of which were taken almost sixty years ago now, updated to the standards of 2021’s audiences who are spoiled with Ultra HD and 4K images. The photos are a healthy mix of famous images like the Kirk and Spock duo standing next to each other and looking up at the camera and rarely seen images like matte paintings, actors getting ready for a scene with Roddenberry instructing them, etc. I had the pleasure of reading both the hardcover and the digital review copy of TOS: A Celebration and there is a separate pleasure that comes from admiring the photos on paper under real light and also zooming in to enjoy details on the photos in my e-reader. It’s one of the rare books that I recommend purchasing both a physical copy of and a digital version of (when it eventually releases) for that reason alone.

In the book’s foreword Robinson and Spelling state that the reason for creating this book in spite of there already being a massive fleet of existing works that cover The Original Series was the realization that there hasn’t been an official book that acted as the quintessential collection of the summaries, snippets from interviews and memoirs and images that define the behind the scenes experience of the show. Having read and reflected on The Original Series: A Celebration I can safely say: mission accomplished. While there are many other choices you can pick from if you want to learn more about specific parts of either the show’s processes or its people, if your goal is to read a definitive collection of the bones, flesh, and soul of The Original Series, this is the book you’re looking for. Thanks to the immense love of Robinson, Spelling, and company poured into every page of the book, they have also given us readers the best Eaglemoss book yet.

Star Trek: The Original Series – A Celebration is available on Amazon now.

We’re giving away a copy!

Hero Collector has provided us with a copy of Star Trek: The Original Series – A Celebration to give away to one of our readers. You can enter on Twitter or Facebook.