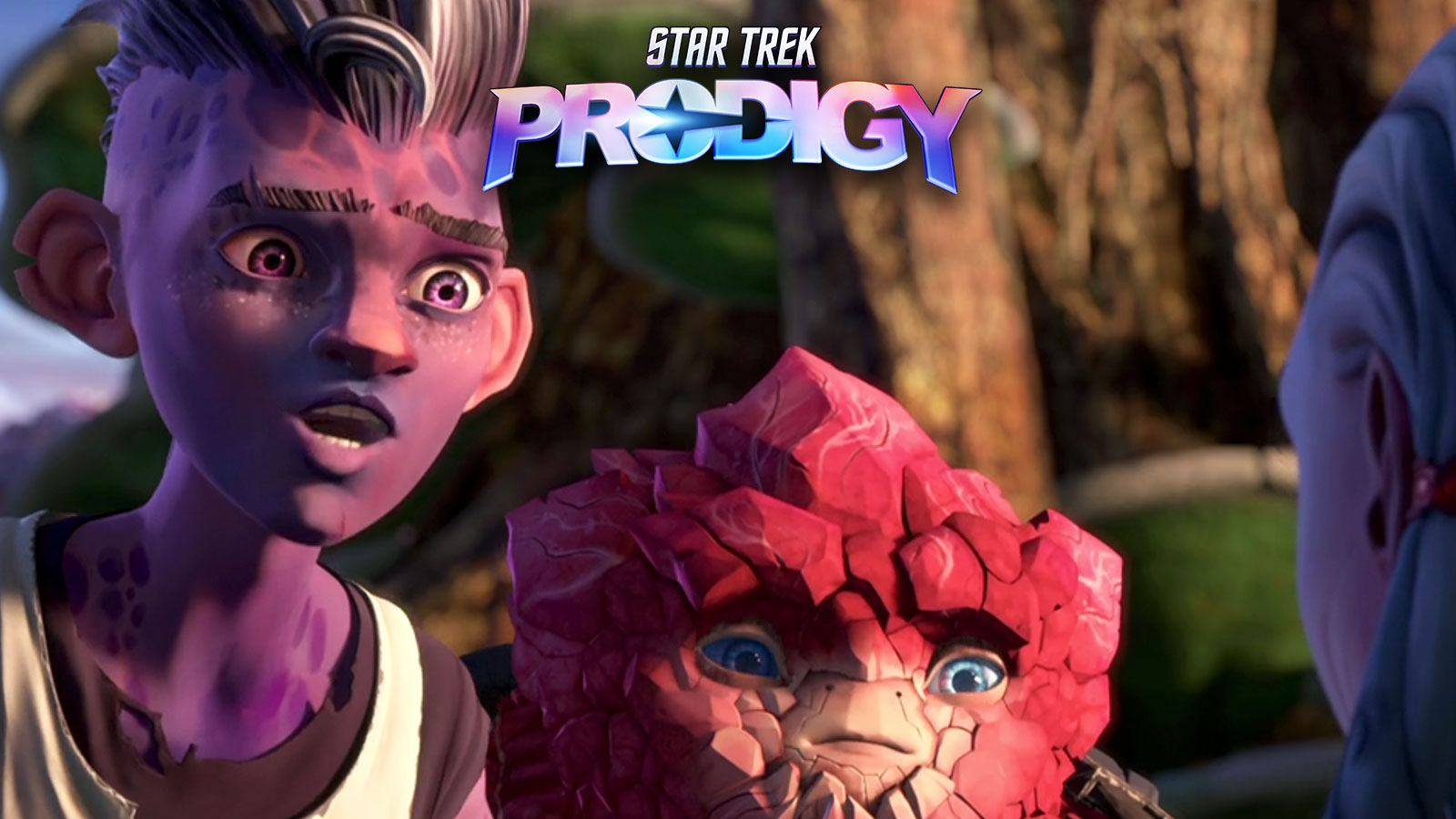 In what is easily the best episode yet of the nascent show, “Terror Firma” sees the crew – now complete with Gwyn allied with the rest of her shipmates – come together to escape both the malicious planet they’ve become trapped on and the Diviner himself.

At the end of the last episode, Dal (Brett Gray) and his merry band of young misfits are trapped on a planet that has hitherto tried to ingest them as food by luring them with their deepest desires. The Protostar crashed far away, and the Diviner (John Noble) is on his way to gather his ship and his daughter. It’s a perilous situation, to be sure.

Luckily, Hologram Janeway (Kate Mulgrew) is able to contact the crew and advise her of the ship’s location, so our young heroes start off on foot to try to reach the Protostar before the planet ingests it. While the super-sentient creature within the planet has seemingly given up on trying to lure the kids to their doom, it opts instead to manifest itself in the form of nightmares, which forces the crew to take shelter in a nearby (and super convenient) crashed Klingon ship. Since the planet is also rearranging itself to prevent the kids from reaching the Protostar, they seem to be out of options until Dal and Gwyn (Ella Purnell) realize they can follow the stars, always a steady, guiding light, to keep their sense of direction.

On their way to the Protostar, the group comes across the Diviner’s henchman, Drednok (Jimmi Simpson), and the menacing robot incapacitates Gwyn while the others escape by hiding just off a pathway (in a scene totally reminiscent of The Lord of the Rings). The Diviner, meanwhile, has landed on the planet and seemingly located the Protostar, but ultimately he must choose between saving his daughter from the roots ensnaring her or boarding his long-lost ship. In an act of paternal betrayal, the Diviner chooses the ship. But in a well-directed reveal, the Diviner isn’t actually boarding the Protostar; that’s what the planet wants him to see, showcases that the ship is truly the thing he wants most. Instead, it’s actually Dal and others who make it to the ship and rescue Gwyn on their way off the planet.

Clearly hurt by her father’s betrayal, Gwyn has no qualms calling herself a member of the Protostar crew now, and in the warp chase away from the Diviner’s ship, it’s Gwyn who activates the mysterious engine located within the sleek Federation vessel: a mini-star-fueled mega-warp drive. The ship is named after its propulsion!

This chase sequence is a fantastic scene for a few reasons: one, it’s gloriously animated, as is the rest of the show, and calls to mind the chase sequence between the Enterprise and Vengeance from Star Trek: Into Darkness; two, being able to dive headfirst into the unknown consequence of activating a mysterious, highly advanced engine just to escape her father shows how much Gwyn is disenfranchised from him; and three, this scene shows the crew working together in a way they couldn’t have done just two episodes ago. How much they’ve learned in such a short period.

Besides the major plot developments within its 22-minute runtime, this episode is further notable for various memorable moments from our heroes. For example, Rok-Tahk’s (Rylee Alazraqui) child-like personality shines through when she asks if the crew can name the hitherto unnamed planet “Larry,” and when she thinks it’s cute that the Protostar holds a “baby” star; Zero (Angus Imrie) gets a chuckle-worthy line when Dal asks him to run faster (we won’t spoil the actual line here); and set under a starry night, Dal and Gwyn share a serious conversation about parentage just before realizing they can follow the stars. Taken together, this episode is a tapestry of memorable character moments, both serious and frivolous, which is as welcome as any substantial plot development.

“Terror Firma” poses some fascinating questions. The fact that Hologram Janeway doesn’t have any reference within her system to the protostar engine is a curious mystery. Why would the training hologram not know every ship system? Moreover, without Janeway to illuminate them, how will the crew learn why this ship is equipped with this engine? Let the fan theories fly!

Believe it or not, this episode marks the end of the first part of the first season, and while it has only been five episodes, we are quite impressed with Star Trek: Prodigy. We’ve said this before: if you are passing on this show because it’s “for kids,” you are missing out. The characters that executive producers Dan and Kevin Hageman have brought to the screen, and the part of the Star Trek universe they inhabit, have been a source of joy, wonder, and humor. It’s a pure embodiment of Star Trek if there ever was one, and we can’t wait for the show to come back on January 6th.