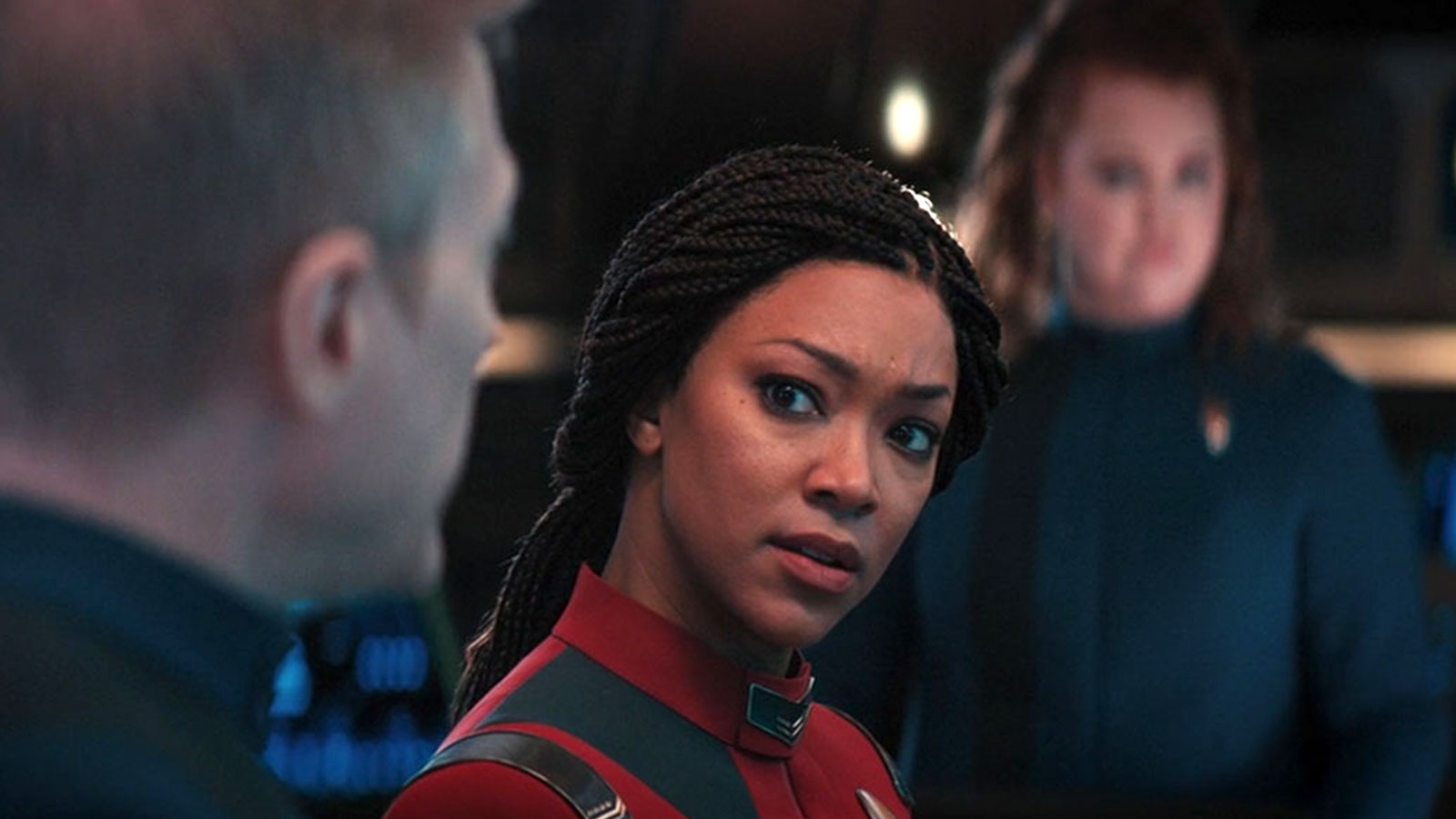 Reeling from the destruction of an entire world, the crew of the Discovery must learn more about the gravimetric threat they face — something they can only accomplish by coming face-to-face with the anomaly.

The Federation is now keenly aware of the destructive nature of the phenomena. It’s a five-light-year-wide threat that moves, meaning at any moment any number of planets and people are at risk. At a briefing at the beginning of the episode, we get some insight into the state of the Federation at this point in time, as various members, including Ferengi, are seen reacting to this information. Ultimately, it’s our hero ship that’s tasked with learning more about the threat, but that’s much easier said than done.

Not content with sitting and grieving the loss of his homeworld and family, Book (David Ajala) feels he must do something – and that ultimately means taking his nimble ship into the dangerous anomaly so Discovery can learn more about it. Michael Burnham (Sonequa Martin-Green), as Book’s partner, feels he is not ready for such a focused assignment, but the captain in her knows he is the best person for the job. Ultimately, Burnham signs off on the plan, knowing she probably couldn’t stop Book if she wanted to.

Attached to Discovery via a matter-transforming tether, and with a holographic Paul Stamets (Anthony Rapp) at his side to operate scanners, Book dives into the distortion. But it’s quickly clear that Burnham’s misgivings about Book’s clear-headedness were correct, and it’s only through some last-minute partner-to-partner connection that Book is ultimately able to focus and pilot his ship clear of the anomaly, scan data intact.

Such an escape wouldn’t have been possible, however, without the timely input provided by Lt. R.A. Bryce (Ronnie Rowe, Jr.), who harkens back to his para-sailing days to help craft an escape plan for Book. We’re all for seeing Discovery‘s secondary characters step up to the plate, and since Bryce has never had that chance in more than three seasons, we say his time in the spotlight is long overdue, especially when others like Lt. Kayla Detmer (Emily Coutts), Lt. Joann Owosekun (Oyin Oladejo), and Lt. Gen Rhys (Patrick Kwok-Choon) have already had similar moments. It’s a touching scene, then, when Saru (Doug Jones) and the rest of the crew applaud Bryce’s life-saving contribution.

This episode focuses on interpersonal relationships and emotional intelligence more than anything. As Book’s partner, Burnham desperately tries to help the survivor process the enormous loss he just experienced, asserting that it’s okay to grieve – which he eventually does at the episode’s conclusion. Notably, it’s only through the aforementioned private conversation the two share at the climax of the mission that Book is able to pull through and complete it. Stamets, meanwhile, shares his own connection with Book, as the scientist finally shares that he has felt resentment toward the man since Book used Discovery‘s spore drive last season when Stamets could not. Stamets at the time felt helpless to save his family (remember that Doctor Culber and Adira Tal were on the dilithium planet) and Book stepped up when the engineer could not.

Other connections in this episode include Tilly (Mary Wiseman) sharing a bond with Doctor Culber (Wilson Cruz), as Tilly recognizes she feels “off” in some way thanks to recent events – a feeling that manifested by her being inadvertently aggressive toward Adira Tal (Blu del Barrio) during the recent mission. Tilly is looking for a counselor to help her explore these feelings, and Culber seems to fit the bill. The doctor explored being the ship’s de facto counselor before, so it’s rewarding to see his own emotional intelligence offer other crew members help.

Gray Tal (Ian Alexander), the entity that has existed heretofore in Adira’s head, also gets a major moment this week as he prepares to insert himself into a new host – but not a host that Trill is used to inhabiting. No, instead Culber has helped prepare a Soong-type android body, a body much like the one a certain Picard once used hundreds of years ago, for Gray to transfer into. We love it when various Star Trek productions feel a part of the same universe, as the Berman-era Star Trek did so well, so this little bit of throwaway information that references the events of the Star Trek: Picard season one finale will certainly be welcome for fans. Gray being able to choose exactly what he looks like, including removing an unwanted mole on his hand, is icing on the cake for those who look to this character as a symbol of hope, identity, and relatability. As Alexander is Star Trek‘s first trans actor, Discovery is addressing trans rights in a way no other show is doing, and that deserves major praise.

Taken together, It’s not too much of a stretch to assert that the major threat of season four so far is a clear analogy for COVID. A (seemingly) natural phenomenon is threatening the galaxy, leading to death and disruption. To solve the threat, our characters focus on scientific efforts in understanding it, leading to a critical mission that involves scanning the anomaly in as detailed a way as possible. Moreover, this threat is already impacting characters on a personal level (like Tilly’s need for counseling), and they are struggling to deal with it. For our money, this interpretation is perfectly Star Trek. Indeed, what is Star Trek if not a mirror for our reality, as The Original Series proved so adroitly back in the 1960s? Kudos to Discovery‘s writers for taking a real-world event and transforming it into a galactic-scale yet interpersonal Star Trek story. Thinking of this season through this lens makes us even more invested in how this season plays out.

Star Trek: Discovery returns next week with the third episode of season four “Choose to Live” on Thursday, December 2nd.