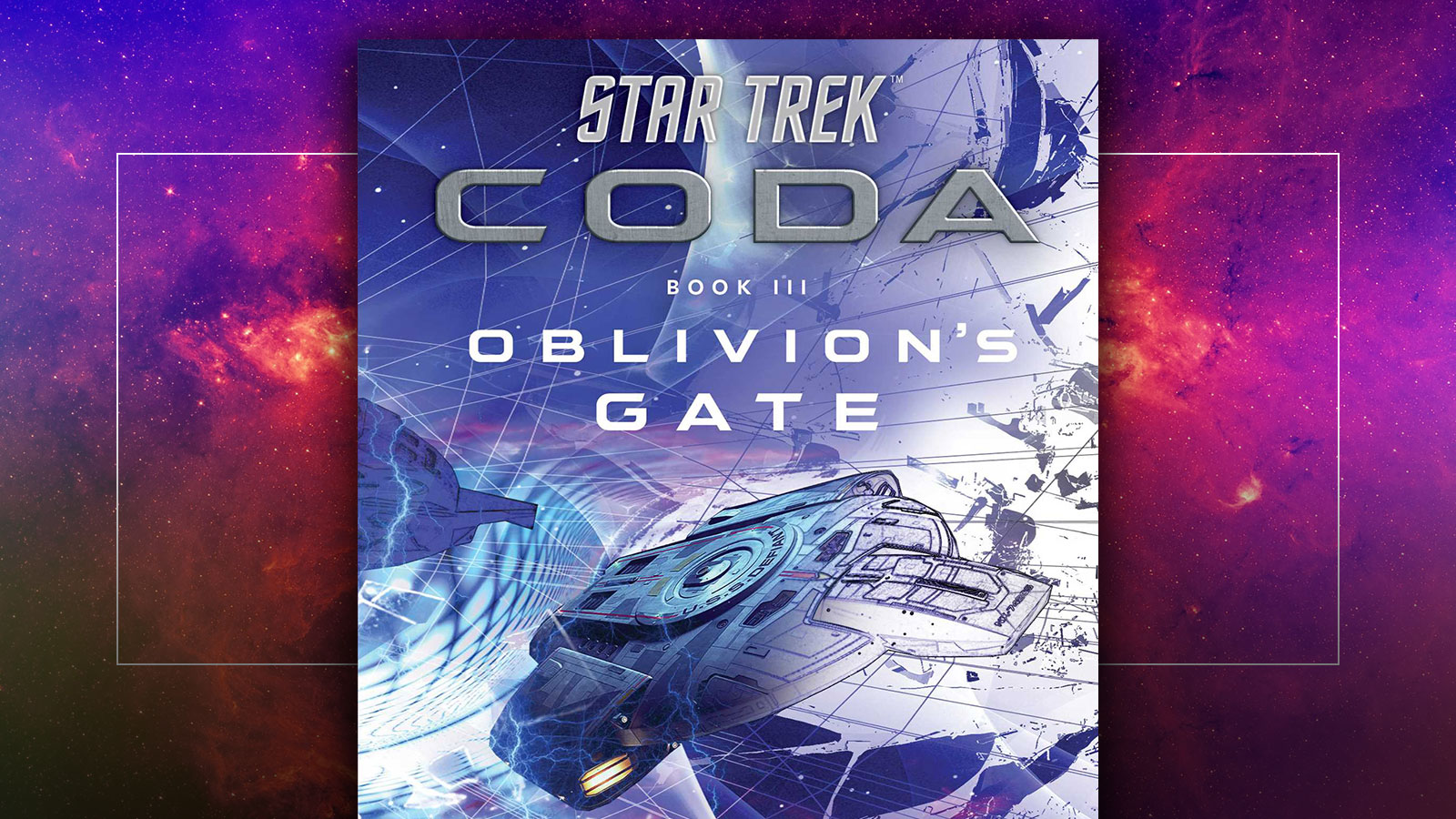 So… we’ve reached the end.

Taking the baton from James Swallow and Dayton Ward, David Mack, now a 29-time Star Trek novelist, has the enormous task of bringing home the end of the Star Trek literary universe.

If you’re reading this review, you probably know that the Star Trek: Coda trilogy is a way to do just that: bring the post-2005 Star Trek novel universe to a close, an effort that the trilogy’s authors thought necessary considering the ongoing on-screen Star Trek projects like Star Trek: Discovery and Star Trek: Picard along with the upcoming Star Trek: Strange New Worlds series.

What we appreciated about Oblivion’s Gate is that it’s clear the stakes are deeply personal, despite the universe-spanning story. The multi-universe threat our heroes face thanks to The Next Generation‘s one-time enemy, the Devidians, is the overarching plot sure, but Mack certainly doesn’t shy away from digging deeply into intense loss and personal suffering. Taken at face value, we know our heroes need to make the ultimate sacrifice to stop the threat facing them – that is, erasing themselves and their entire universe from existence – and that the road to that solution isn’t an easy one. But having interpersonal risk associated with the threat certainly helps bring the stakes closer to home as the Temporal Apocalypse gets underway.

“Good or bad – it no longer matters, Beverly. This is our last stand. We must hold this ground until our task is done, or else we lose everything. Not just all we’ve had, but all that anyone, anywhere, anywhen, has ever had, or ever will have.”

Those who have finished the second book in this trilogy know that our heroes had to take shelter in the Mirror Universe to escape Admiral William Riker, who is being influenced by some kind of temporal personality disorder. Oblivion‘s Gate hits the ground running, and soon enough we are introduced to even more familiar characters, such as the captain of the CSS Enterprise, Jean-Luc Picard, and Director Savvik of Memory Omega, a scientific facility that houses all kinds of advanced technology. While in the Mirror Universe, our heroes learn a fascinating truth about their existence: they are actually not part of the most stable – and therefore most important – timeline, the Prime Timeline, but rather merely a branch of it.

In our experience, this book was incredibly emotionally draining; we imagine that feeling would multiply the more you’ve been invested in the Star Trek lit-verse. This emotional turmoil was mainly due to the enormous existential threat our characters face, and how each person deals with their impending and inevitable erasure from existence. To his credit, Mack manifests existential conversations between a myriad of relationships, such as father and daughter (Data and Lal), husband and wife (Jean-Luc Picard/Beverly Crusher or William Riker/Deanna Troi), star-crossed lovers (Worf and K’Ehleyr), and even extra-natural entities (Wesley and… other versions of Wesley). One can’t help but reflect on humans’ “normal” existential fears while reading this book, and we credit Mack for really digging into this aspect of the human condition to help tell his story.

“Forgive me, Rene. In all of history, there have been few good deaths, but a great many bad ones. I fear are all about to share in the latter.”

Picard to his son.

We can only imagine the kind of pressure David Mack was under in writing this entry of the Coda trilogy. How does one end an entire library of Star Trek lore? While this book may not satisfy everybody’s expectations (we’re sure that no book could have), for our money Mack accomplishes his mission with grace. We can’t help but imagine him writing this book as if he were a choreographer for a dance, where the dancers gracefully complete their complex moves around the stage as they head upbeat toward their grand finale.

Importantly, this grand finale is given room to breathe. It may not surprise you that at 422 pages, Oblivion’s Gate is Mack’s longest book, and only rarely do we consider some parts of this novel unnecessary or filler. Rest assured that your favorite Star Trek lit-verse characters are treated with respect in their final moments, and we were largely happy with how Mack chose to bring ends to these characters. And speaking of ends, we want to mention that the grace note at the end of the book – a short chapter that helps frame the lit-verse and future canonical Star Trek as equally notable works of art – will make you crack a smile and marvel at Mack’s creativity.

The only major criticism we want to level against Oblivion’s Gate is Mack’s penchant for overwhelming technobabble. This may seem like a strange critique for a Star Trek production, but in this book, Mack really seems to indulge in the highly technical and fantastical sci-fi explanations for what’s happening to our characters. For even those who are veterans of Star Trek‘s inherent use of sci-fi silliness, this book leans way too much into it. Sometimes, you might read a few sentences about the temporal things that are happening, and then pause and ask yourself, “what did I just read?” Of course, oftentimes a character will swoop in with a convenient analogy or comparison to help reorient lost readers, but we can’t help all this could have been accomplished less verbosely. It does help a little that Mack has some characters equally perplexed by the temporal jargon, but such self-reflexive writing doesn’t erase our complaint.

One minor criticism against this book is that sometimes it seems that Mack has a hat from which he pulls various character names, and then tries to insert them in this story. For example, Mirror Savvik’s inclusion as director of Memory Omega just seems like fan service. Never is a reason given why it’s her who heads that project. We know the Mirror Universe is not supposed to be exactly like the Prime Timeline, but it seems too convenient to include the aging Vulcan there. The same thing can be said of K’Ehleyr (Prime-Worf’s deceased wife) as the CSS Enterprise‘s first officer. We get that this trilogy is a celebration of Star Trek‘s literary efforts over the past couple of decades and you would naturally want to include as many people as possible (on that front Mack does include some cameos and references that long-time fans will enjoy), but just know that sometimes it may not make too much narrative sense when certain characters pop up.

Gripes aside, we want to give kudos to the three authors of this trilogy for having the urge to end Star Trek’s non-canonical presence in as legitimate a way as possible. Like Dayton Ward explained when his book, Moments Asunder, kicked off the trilogy, he and his fellow novelists wanted to spare Star Trek fans the kind of existential agony that Disney produced for Star Wars fans when that company struck all expanded universe canon from the record. In our opinion, Ward, Swallow, and Mack have earned the thanks of many Star Trek fans.

As you finish this excellent trilogy, here are two pieces of advice: one, read the Acknowledgements! And two, and more importantly, block out time in your day to read through the last 40 or so pages uninterrupted. To return to the choreographed dance analogy from before, you wouldn’t want to get up and walk out of the theater as the last dance number is underway, would you? Mack has delivered a literary effort worthy of such undivided attention, and as you turn the last page of this book, it’s okay to feel exhaustion, sadness, and even grief at having the lit-verse as we know it come to end. But don’t forget to feel happy for the gift that is the Star Trek lit-verse – dozens of books filled with new and familiar characters, countless memorable moments, and lessons and themes that continue the Star Trek spirit. No matter what form Star Trek‘s novel future entails, we’re sure these elements will be ever-present.