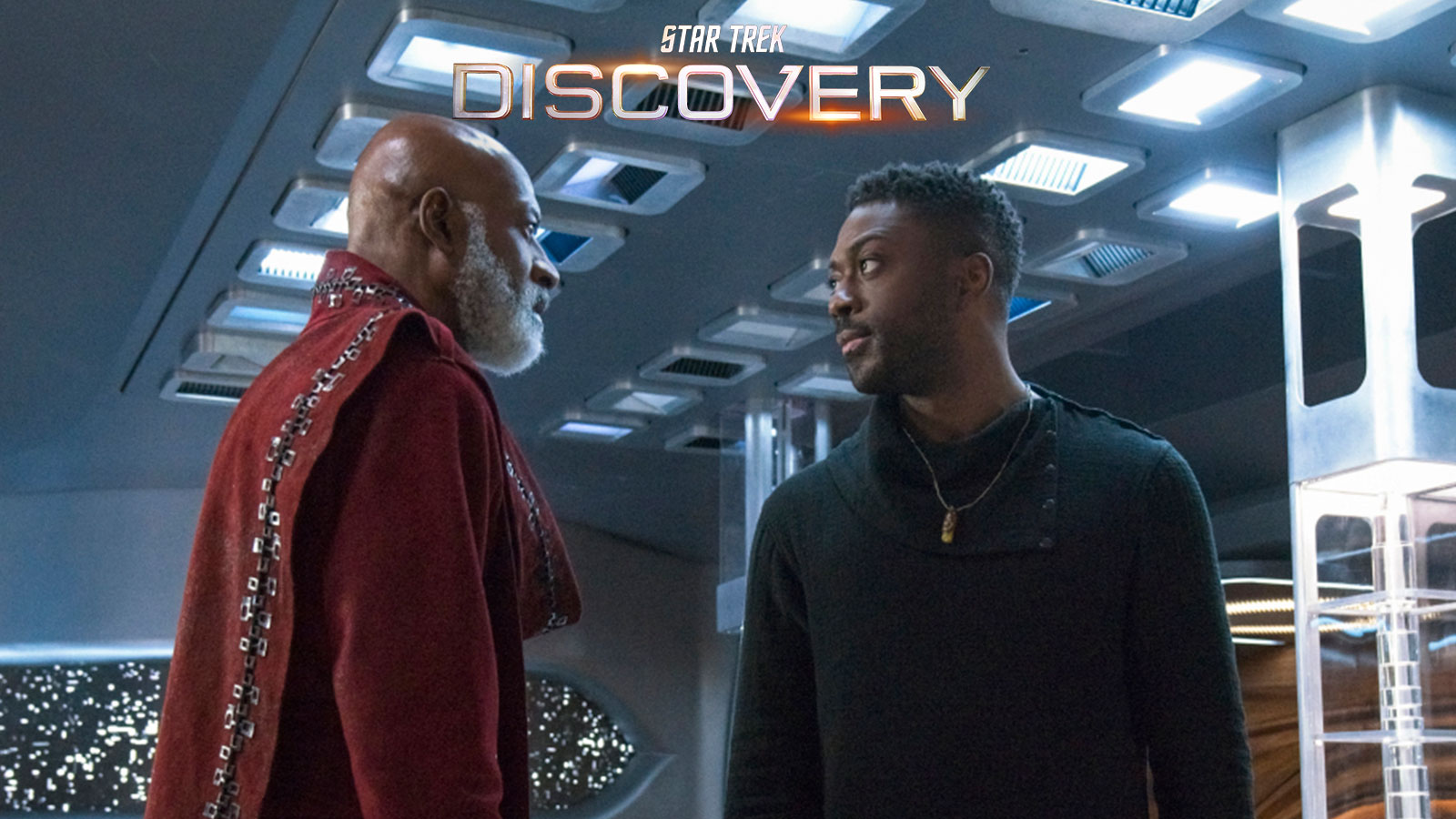 Star Trek legend Jonathan Frakes returns to the director’s chair for a Star Trek: Discovery episode that sees the series break open the floodgates on Zora, the ship’s artificial intelligence, as Michael Burnham and crew race to escape a deadly rift left behind by the Dark Matter Anomaly.

Zora (Annabelle Wallis), in what is apparently a natural evolution of her programming, can now feel emotions, as we learned in the last episode. But even that extraordinary event isn’t top of mind for Michael Burnham (Sonequa Martin-Green), as the captain learns there is a rift in space that Discovery can investigate to possibly learn more about the DMA.

In a pre-mission briefing, Saru (Doug Jones) mentions previous Federation encounters with rifts in space, hoping such intelligence would help them know what to expect. He mentions how the Enterprise (although he doesn’t mention which one) recorded heated plasma, and Voyager — presumably the 24th-century vessel we know and love and not the Voyager that was seen in this season — encountered ionized particle eddies. Taken together, Burnham and crew can expect the journey to be turbulent as they trek into the unknown, but the possibility of finding evidence for who made the DMA is worth the risk.

Discovery enters the rift, and what awaits them on the other side after an unexpectedly smooth ride is frightening: an endless, lightless, empty void. The only thing out there is a slowly encroaching energy field that threatens to consume the ship. Burnham and crew must race to find a way out of the rift before it destroys Discovery. Complicating matters is Zora, who, as any reasonable being with emotions, is frightened by the endless blackness, leaving her unable to perform her operations as effectively as usual. Having the ship’s computer occupied with such burdensome emotions is highly dangerous, and it’s only through a relaxing game with Gray Tal (Ian Alexander) that Zora is able to distract herself enough to clear her mind and render assistance to the crew – but not before a Discovery crewmember is killed by the encroaching void.

As the crew races to escape the void, Book (David Ajala) is having an issue of his own. After trying (and failing) to help Discovery spore-jump out of the void, his cortical dream center gets sufficiently fried thanks to an energy surge, and he starts to see hallucinations of his father, Tareckx (Rothaford Gray). Book was never fond of his father because of the older man hunting animals Book considered sacred; at one point earlier in the episode, Book even tells Burnham that he would never put his father’s face on a family tree. It turns out Tareckx reciprocates the ill-will. He isn’t shy about showing his contempt for his son’s choices in life, including tethering himself to Discovery and her captain, and not taking matters into his own hands to hunt down the DMA’s creators.

Understandably, Book is disheartened by his father’s disapproval and is shaken by the encounter. The way Book sees it, Tareckx is either a reflection of how Book is feeling subconsciously about his life choices, and specifically his choices in the face of the DMA threat, or really a spirit that is communicating with him. Book opts for the spiritual interpretation, as that means his family, including his brother and nephew, might exist someplace, somehow, but we’re curious if he’ll act on these feelings after seeing them made manifest via his father.

While in the rift, Paul Stamets (Anthony Rapp) makes a startling discovery: the rift, and Book’s brain following the energy spike in the spore drive chamber, contains a unique particle that is only found in the Galactic Barrier (the same one encountered by the Enterprise in “Where No Man Has Gone Before”), leading him to conclude that the DMA, and whoever made it, is not from the Milky Way. How mysterious! With the rift’s deadly energy field about to take over the ship, the crew brainstorms a way to get out of the void: by using that exotic particle as a beacon, Discovery can scan for it to produce a ping – just like sonar systems. Knowing where the greatest concentration of particles is would allow Zora to chart a path out of the void. But the crew runs out of time to fully implement the plan, forcing everybody but Burnham to store themselves in the transporter buffer, a la Montgomery Scott in The Next Generation‘s “Relics.” It’s a daring plan, only possible if Zora can unshackle herself from her newfound emotions and concentrate long enough to navigate the ship to safety.

As the captain, Burnham opts to stay on the bridge as the AI pilots out of the rift, and the toll on Discovery is heavy; the ship is massively damaged during the escape attempt, and Burnham passes out from the stress on her body. It’s during this escape attempt that “Stormy Weather” delivers a remarkable sequence, one that will surely be a landmark moment for Zora’s character arc, however it plays out. To help Burnham stay calm during the tense and dangerous trek back to normal space, Zora offers to sing a song, “Stormy Weather,” which Burnham heartily agrees to. Frakes expertly overlays Zora’s beautiful voice with the fiery chaos of Discovery‘s escape attempt; it’s a scene that shows Zora’s human-like compassion for her crew, even though she herself is grappling with feelings of dismay and fright.

“You believe your experience with suffering has made you stronger and more empathetic.”

“Yes. And I believe what you’re feeling now will make you stronger, too.”

Zora and Michael, on Zora’s fear while escaping the void.

We’ve seen Zora start to show care for her crew, like in season three’s “Forget Me Not” when she suggests to Saru to have the crew watch a movie to reduce stress, but “Stormy Weather” shows her care in a much more visceral way. If there was any doubt Zora considers her crewmates her family, she shows Burnham just how much she cares by creating a family tree – the kind Burnham made via the lalogi orb in the previous episode – and places Discovery‘s crew in the tree. It’s a touching moment, and it makes us anticipate even more the day when Discovery and Zora will be cast adrift in space, as seen in 2018’s “Calypso.”

We get the feeling that this season will finally lead us to that aforementioned Short Trek, and we’re super impressed by how Discovery‘s writers have been able to lead us there over the course of multiple years. Zora is becoming one of the most interesting characters of this season – a remarkable statement considering she’s just a voice. Seeing her develop her newfound humanity, along with what the Federation’s plan is now knowing that the DMA is not from this galaxy, is keeping us hooked on this season in a major way.

The first three seasons of Star Trek: Discovery are available in a Blu-ray box set now on Amazon.