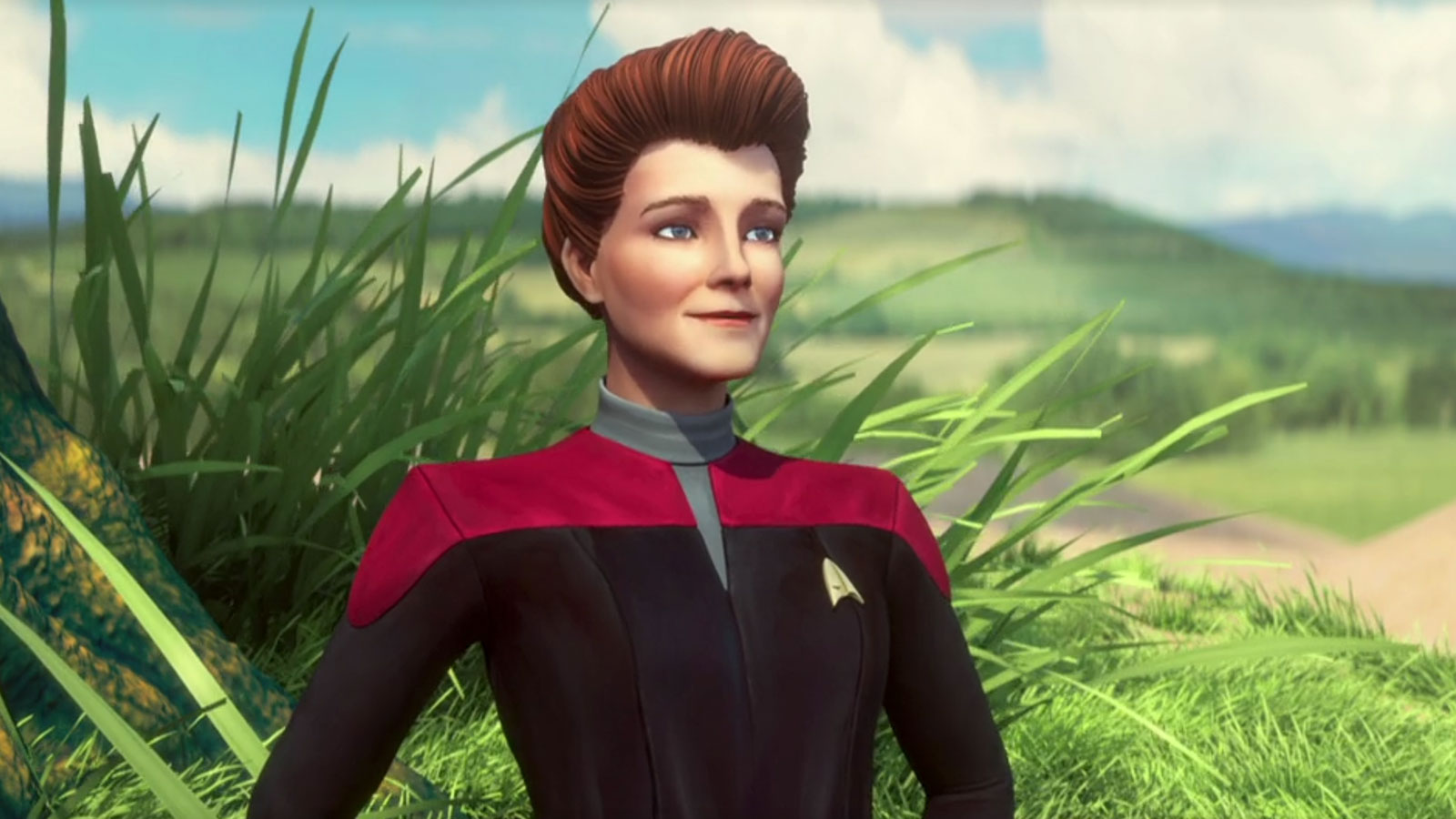 Star Trek: Prodigy leans into quintessential Star Trek storytelling in this week’s thought-provoking episode, as one of our young heroes finds her true place within her found family.

We praised last week how this show, while technically meant for kids, doesn’t talk down to its audience. It isn’t afraid to lean into technobabble, and nowhere is this observation truer than in “Time Amok.” The crew of the Protostar finds themselves trapped in a time distortion field, making their escape only possible through remote teamwork and coordination — which is easier said than done for the inexperienced bunch.

After being disappointed with the crew’s performance in their first contact encounter, Holographic Janeway (Kate Mulgrew) tasks them with learning how to better work together. This training takes place on the holodeck, where the crew must shepherd a chicken, a fox, and a bag of grain across a river in a boat, but the crew lacks the coordination and focus to succeed.

Real-life comes knocking, however, as their ship crosses into a tachyon storm that, while normally harmless, actually wreaks havoc with the Protostar‘s special warp drive. This leads to a time displacement event that temporally separates each crew member, except for Janeway, who can interact with each crew member thanks to her holographic nature. Janeway determines that the crew all are experiencing time at different speeds and that they have 10 minutes — time that’s relative to their current temporal phase – to rectify the warp core and save the ship. Each crew member experiences 10 minutes differently; it takes Jankom Pog (Jason Mantzoukas) only a few seconds for 10 minutes to play out, while Rok spends days alone as those 10 minutes pass.

Through interactions with each crew member, Janeway shepherds the creation of a warp matrix, a device that would fix the issue with the Protostar‘s protostar and return time to normal. The designs for this matrix were created by Zero (Angus Imrie), assembled by Dal (Brett Gray) and Gwyn (Ella Purnell), and finally implemented by Rok, all in their respective time dilations. Needless to say, plenty of technobabble helps explain how and why this trippy event is happening, and it should make any Star Trek fan feel right at home as the crew, individually, tackles this sci-fi challenge. Kudos to writer Nikhil S. Jayaram for crafting a pretty novel time-centric story.

Of course, every Prodigy episode leans into a specific lesson or two, and this week is no different. It showcases two things: how important it is for team members to work together, even despite challenging obstacles, and how important it is for you to be true to yourself. The latter lesson manifests in our favorite rock creature, Rok-Tahk, who has grappled with preconceived notions of what role she is supposed to fill on the crew. Thanks to her hulking nature, her crew, including Captain Dal, always thought of her as a security officer who is able to project an aura of menace should it be needed – quite in opposition to her sweet, innocent nature.

Thanks to the scientific and engineering challenges born from needing to create a warp matrix, Rok has the opportunity to challenge herself to complete the construction and save the crew. While she at first is scared of the pressure put upon her to venture outside her comfort zone when such high stakes are involved, she steels her nerves and dives into the work – and it turns out she’s really good at it. The end of the episode sees her realize her new scientific interests, much to the appreciation of the crew.

Of course, there’s more than just time itself that challenges the crew this week. On the hunt for the Protostar, The Diviner (John Noble) receives a tip from Nandi (Grey Griffin), who points him to where the Protostar is. But thanks to the ship’s quick escape from him last time, it’s too far away to simply travel there; instead, The Diviner enlists the aid of Drednok (Jimmi Simpson), who, through some mysterious means, is able to recreate himself in the Protostar using the vehicle replicator. He then wrestles control of the ship away from Gwyn long enough to disrupt her efforts to get a warp matrix working.

Gwyn doesn’t give up the ship so easily, however, as she ultimately jettisons the mechanical henchman into space. This won’t be the last we see of Drednok, though, as thanks to time displacement, the end of the episode sees him still being built in the ship’s vehicle bay. What havoc will he bring to the crew next week? (Moreover, we assume this new Drednok will not have the memories of the “real” Drednok; that is, he won’t remember his fight with Gwyn or his interaction with Janeway, right?)

Besides Rok’s time in the spotlight, this episode delivered a major revelation to Janeway: that the crew isn’t actually Starfleet cadets, but a group of aliens who stole the Protostar. But this revelation is not given room to breathe as it should. It seems like Janeway and Zero’s conversation might have been cut for time, especially since Janeway references a key point in this conversation later with Jankom. For whatever reason, it’s too bad we didn’t see the consequences of this revelation play out, and it would have been interesting to see Janeway’s reaction to being lied to for so long.

This episode does present a major question to be answered. When Janeway encounters Drednok and claims he was the one who wiped her memory, he says “close, but not quite.” So, who wiped Janeway’s memory, and why? Also, how did Drednok acquire such an intricate understanding of the ship’s systems? After all, he was able to immediately identify where on the ship he could find the coupler needed to complete the warp matrix. There’s certainly more to the story of Chakotay’s capture and Drednok’s presence aboard the Protostar than we think, and we’re super excited to learn more.