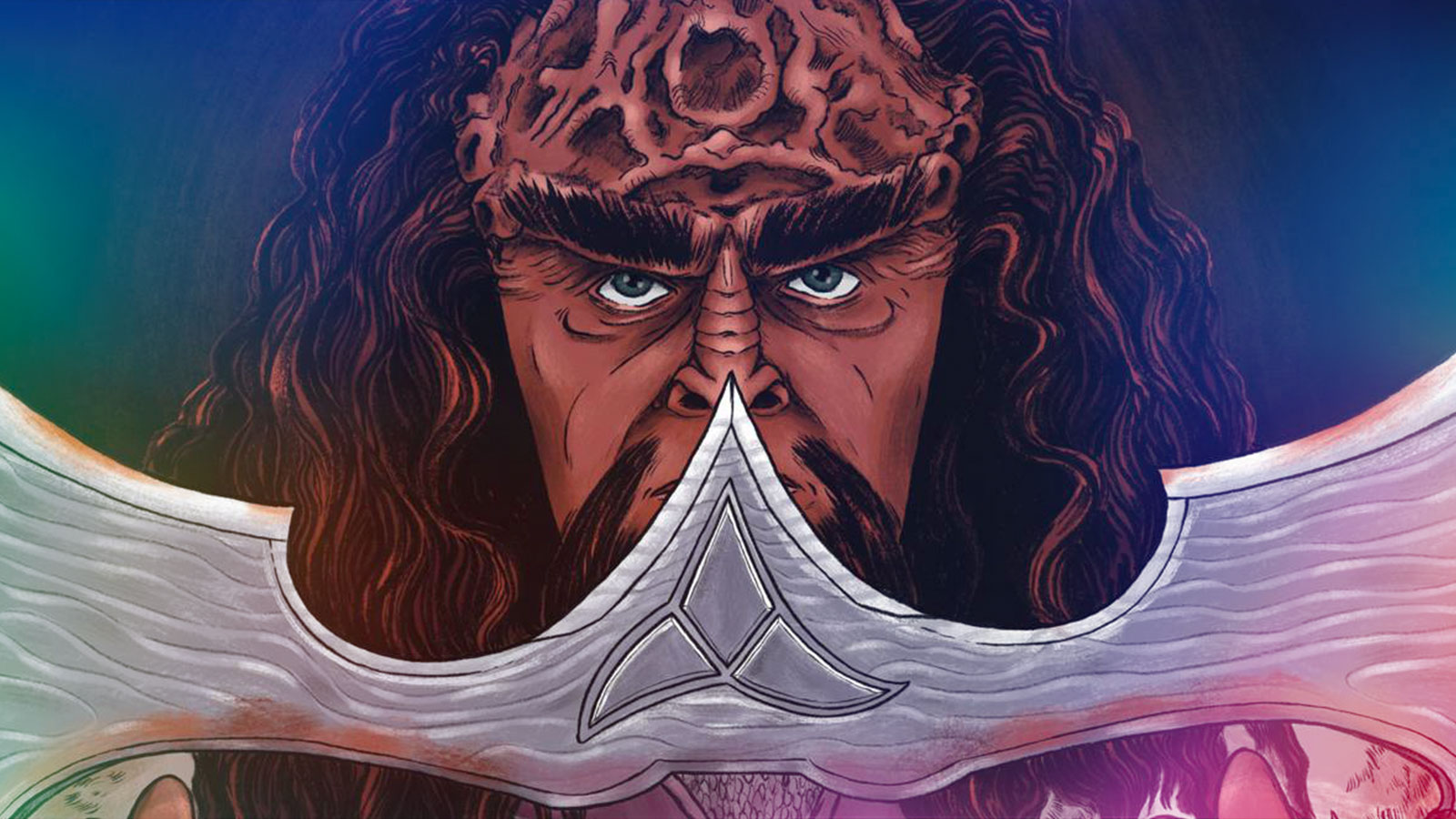 After a duel between him and his brother ends in tragedy, a young hermit calling himself Kahless sets out on a journey that will mark the birth of a prophet for the Klingons and equip their civilization with a powerful purpose.

The writing team of Jackson Lanzing and Collin Kelly along with artist Timothy Green II combine breathtaking vistas, thunderous dialog, and brutal action to craft a comic epic worthy of the legend of Kahless.

Things have been mostly quiet on the Star Trek comics front but it’s about to get very busy. Mirror War has just crossed its midpoint with four issues, more Star Trek: Discovery comics are on the way, and the Klingons one-shot has arrived, the first in a series of comics about different alien civilizations in the Trek universe. Veteran editor Heather Antos whose resume includes nearly a decade of curating comics in publishing houses like Marvel and Valiant joined IDW in April as Senior Editor and later took over the reins of the Star Trek imprint. Between three series and teases on social media about more Trek comics coming, it’s clear she’s bringing her ambitious vision that brought about the relaunch of the highly influential Star Wars comics back in 2015 to Star Trek. There’s no such thing in my book as too many Trek comics (or any comics for that matter) but if everything that’s coming our way is as enjoyable as this one-shot, I predict that a glorious season of reading picture books awaits us!

The tale begins at the foot of the Kri’stak mountain on Qo’nos so long ago in Klingon history that its history and myth are touching each other. Kahless has just taken his brother Morath’s life with a blade freshly forged from Kri’stak’s holy flames. A mysterious revelation gifted unto him during the making of this blade has compelled Kahless to end his family’s existence as a hermit atop this mountain. Morath and this previous life are small, necessary byproducts needed to ensure the success of the colossal task that the blade has placed on him. Armed with it on his back, Kahless sets off on a path to unite the Klingon tribes and bless them with a message that will reverberate across time and space for millennia to come.

Writers Jackson Lanzing and Collin Kelly ended their landmark comic series Star Trek: Year Five with #25 in October. The duo moved on to big comic ventures in DC and Marvel and just when I thought Star Trek comics were in their rearview, they announced much to my delight that they’re returning for this one-shot. Lanzing-Kelly, like veteran writers David Tipton, Scott Tipton, and Mike Johnson, proved with Year Five that they possess a deep, polished understanding of the Star Trek storytelling style. Whether we only get them for a comic here and there or they come back with another maxiseries, any Star Trek comic that bears their name is an automatic addition to my pull.

Lanzing-Kelly paints a fascinating portrait of Kahless. He’s part Moses, part Man With No Name, part Tony Soprano. The duo is captivated with alien cultures in Star Trek and continues to make us take off our rose-colored visors to examine key moments in their past. Writer Brandon Easton drew from a similar concept well in Year Five 21 when Spock is pulled back in time and learns that Surak is violent and vengeful, the opposite of what his teachings make him out to be. Lanzing and Kelly take this to the next level in Klingons by taking the Starfleet shackles off. Everything you imagined the Klingon past to be when Worf speaks of it is presented here in its terrifying, blood-soaked glory. In that respect it’s probably not the best comic for an eight-year-old or a Trekkie who’s not a fan of graphic violence, to read.

Timothy Green II is a veteran artist whose earliest work goes all the way back to 1996. I was surprised to find that his wide range of comic art didn’t include a Star Trek comic because he draws Klingons really well. His Qo’noS landscapes are vast and look lived in. They are inspired by spaghetti westerns and movies like 300 while his action exhibits the quiet, almost meditative spirit of samurai manga. Artists like him are strong counterarguments to people who say Star Trek action is not its strong suit. His art here shows that with the right story and when done by the right artist, it can be incredibly strong, perhaps its strongest suit. Green also draws Klingon features particularly well and adds just enough subtlety to distinguish their faces and body shapes when we see them in close-ups. Colorist DC Alonso complements Green’s pencils well with a palette full of bright red and orange shades, giving Qo’noS a visual identity that stays with you long after you put the comic away. I really hope this isn’t the last Klingon-centric comic painted by Green and Alonso.

STAR TREK: KLINGONS is an excellent comic. While its unapologetic portrayal of Klingon culture might not be for every Trekkie, the thought-provoking narrative about a mythological Star Trek figure adds a humanizing, sympathetic layer to our favorite Bat’leth wielders.