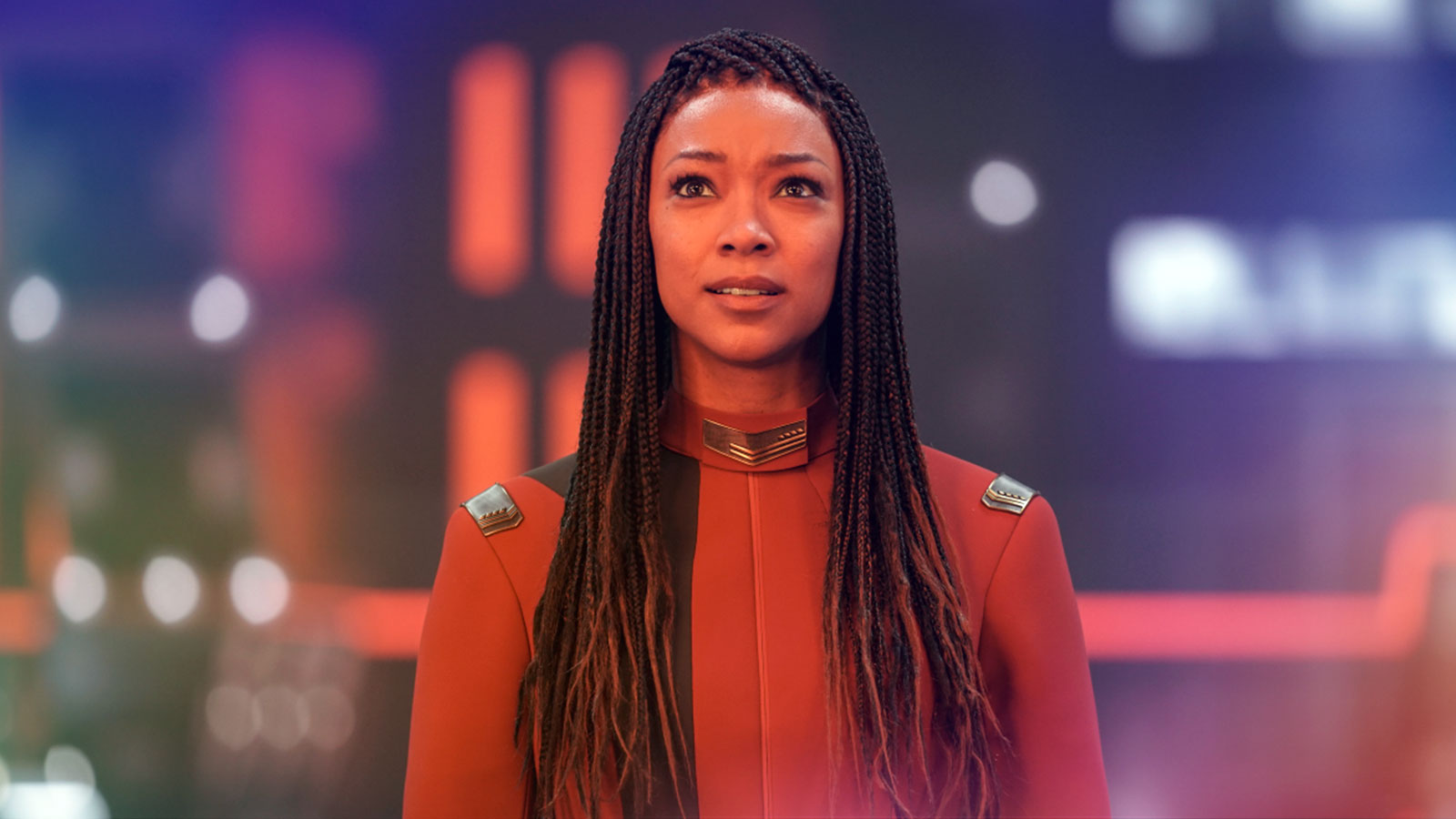 After a quick stop at a nearby planet to help learn the context for communicating with Unknown Species 10-C, Discovery finally arrives at the hypershield, where the crew exercises keen intelligence and fascinating problem-solving to start communicating with the alien race.

In the last episode, Michael Burnham (Sonequa Martin-Green) and her away team discover that 10-C communicate emotion via chemical compounds, an important discovery as this is the cultural context for which the Milky Way residents can approach 10-C. In “Species Ten-C,” Discovery reaches the hypershield, the massive construct in space that houses 10-C following their escape from their nearby doomed homeworld. Immediately, the hyperfield flexes our imagination, as we are told it is the size of Mars’ distance from the Sun, and that it holds three gas giants. Unfortunately, we are only told this information, not shown it, so we’ll hope the visual spectacle comes later. Or perhaps the show’s producers plan to purposefully hide the hyperfield’s interior for some dramatic reason?

Discovery first tries to send a few DOT robots, loaded with the “peaceful” pheromone, to the hyperfield to help convey the crew’s intentions, but the hyperfield swallows the DOTS in a plume of what looks like water, and Discovery is next. Despite their attempt to flee, the ship and its crew are pulled into the hyperfield and encased in an orb that blocks their view of… well, anything, and the orb is reportedly bringing them to one of the planets. How, then, are the crew supposed to initiate contact?

The crew knows that 10-C values boronite, the material the Dark Matter Anomley is harvesting back in the Milky Way. So, Burnham suggests launching a bit of boronite out of the ship as a gift, hoping that 10-C takes that as a communication request. It works, and soon a member of the 10-C shows itself (kind of) right outside the shuttle bay doors. Being able to finally see 10-C is what we have been looking forward to for a long time, but since we actually don’t see much of the alien at all in this episode thanks to the gas planet’s atmosphere around Discovery, we bet the true, actual reveal – the one where we’ll get a good sense of what 10-C looks like – is still coming.

We won’t detail in its entirety the intricate process through which Burnham, President Rillak (Chelah Horsdal), Dr. Hirai (Hiro Kanagawa), and the rest of the first contact delegation learn how to communicate with the 10-C, but it involves quite a few elements, such as mimicking light patterns to establish fundamental comprehension, matching 10-C’s light shows with a three-dimensional representation of their hydrocarbons, and assigning symbols to the various hydrocarbons to form mathematical equations. Rest assured the process is really fascinating and, importantly, grounded in real-world math and science; for example, Burnham likens the math-based language the delegation decodes to the real-world Lincos, a type of constructed language posited in 1960.

Star Trek, especially Berman-era Star Trek, established its own framework for understanding its science. Thanks to the amazing imaginations of the various production crews, Star Trek‘s futuristic science feels like it makes sense, even if all these characters say is technobabble nonsense. Part of this futuristic science is the universal translator, which magically takes care of language barriers. In “Species Ten-C,” there are numerous methods of pattern-recognition, language interpretation, and math-based solutions that Burnham and her crew use to explain to the 10-C that they are, in fact, sentient and intelligent; this is a welcome change from every other first contact scenario we’ve seen in this franchise. Suffice to say, it’s smart writing by writer Kyle Jarrow, and watching the crew solve this communication barrier is definitely a highlight of not just this episode, but season four thus far.

Also commendable is the diverse number of viewpoints Burnham enlists to ultimately solve the language barrier. There is a scene where we have Burnham, Saru (Doug Jones), Zora (Annabelle Wallis), President Rillak, Doctor Hirai, President T’Rina (Tara Rosling), and bridge officers Lieutenant Commander Kayla Detmer (Emily Coutts), Lieutenant Commander Nilsson (Sara Mitich), and Lieutenant Christopher (Orville Cummings), all offering their own input that ultimately helps the crew arrive at a communication solution. Burnham said to Detmer in the last episode that they will complete this journey “together,” and it’s turning out she was right. It’s a wonderful display of teamwork.

10-C is apparently also impressed with how the Discovery crew is able to prove their intelligence, as it sends a shuttle to the delegation. The away team President Rillak ultimately decides on is herself, Burnham, Saru, and President T’Rina – all people who offer a particular skillset to first contact, or represent those worlds that are in immediate danger thanks to the DMA.

One person does leave the group during their communication efforts, however: General Ndoye (Phumzile Sitole), as she has a different mission: keeping Cleveland Booker (David Ajala) and Ruon Tarka (Shawn Doyle) informed about what Discovery‘s crew is doing. Book had contacted the general earlier because he was looking for her to enact a plan to allow Book’s ship to launch off its hiding place on Discovery‘s hull and travel to the other side of the hyperfield. On the other side is what Tarka is looking for: the DMA power source. Unbeknownst to Book, Tarka knows more about the consequences of pulling the plug on the DMA’s power source than he lets on.

Thanks to incredulous eyesight and incredible comprehension by the captive Jett Reno (Tig Notaro), the Discovery engineer tells Book that he is being played; Tarka is actually well aware that removing the DMA’s power source will collapse the entire hyperfield, dooming anything and anyone inside it. Tarka does not share this information with Book, as such a discovery would surely trigger Book to not allow the plan to move forward, and how else, then, would Tarka reunite with his friend, Oros? Having Reno observes Tarka’s calculations from her holding area is pretty convenient, we must say, but alas it leads to Book confronting Tarka about this new information. Not that we actually see Book confront Tarka.

Which leads us to a major critique of this episode: why didn’t we see Book approach Tarka about the destructive nature of removing the DMA’s power source? Let’s consider the situation: Tarka and Book have teamed up as two people who are suffering from their own respective pain. They are bonded in a deep way, and by Tarka not sharing the true ramifications of his plan, this counts as a major betrayal of the friendship and partnership the two men have formed. Book would be understandably hurt by Tarka’s secrecy, but we don’t see that exchange play out. This storyline jumps from Reno telling Book that Tarka is hiding something, to Book reacting with anger toward Tarka for keeping this information from him. What a missed opportunity! This would have been a great moment for Doyle, who has so ably played Tarka, and it would have been a watershed moment for the relationship Book and Tarka have built across this entire season.

“Tell him to show you the math. His equations won’t make any sense, but the look on his face will. Like I said, pain makes people blind. You need to make this right.” Reno to Book about Tarka’s secret plan to collapse the hyperfield.

In any case, the confrontation between the two men ends up with Tarka taking control of their ship and Book being held in the same holding area as Reno. With the help of Ndoye, Tarka launches Book’s ship off Discovery and further into the hyperfield, which seriously messes up Burnham and company’s first contact efforts. When Tarka launches the ship, the small first contact delegation had already boarded the 10-C shuttle and transported to a replica Discovery bridge, where more communication exchanges were playing out. The away team was able to successfully invoke a “fear” emotion regarding Milky Way residents and the DMA, and 10-C was able to express the “sadness” emotion at that revelation – indicating that they understand the destructive nature of the DMA. It’s a huge development that is sabotaged by Tarka’s sudden action. The away team is transported back to the real Discovery bridge, leading Burnham to tackle the unexpected threat Tarka presents.

Taken together, “Species Ten-C” presents the most substantial development in the 10-C storyline yet, as Discovery‘s crew finally are able to communicate, albeit simplistically, with the extra-galactic civilization. We want to express major kudos to this show for taking such a deep dive in the fine details of first contact; most times, first contact between different cultures in Star Trek is a standard affair accomplished with the magic universal translator. Here, Discovery is completely shaking up the concept, and uses intelligent science and mathematics to accomplish this. With this in mind, “Species Ten-C” feels like a fresh take on what this franchise can offer, even after hundreds and hundreds of episodes.

There is only one episode left in this season, and there are many questions to be answered. What will happen now that 10-C knows its DMA incites terror in Milky Way residents? Will Tarka’s plan to destroy the DMA power source, and therefore destroy the hyperfield itself, be successful? Doesn’t this kind of qualify him as a madman, someone who is okay with sacrificing countless lives in pursuit of his goal? Will Book and Burnham eventually reconcile their relationship, especially now that Book will fight to stop Tarka? And as always, we’re wondering how Discovery ended up crewless in space as seen in “Calypso“; will that be answered this season?