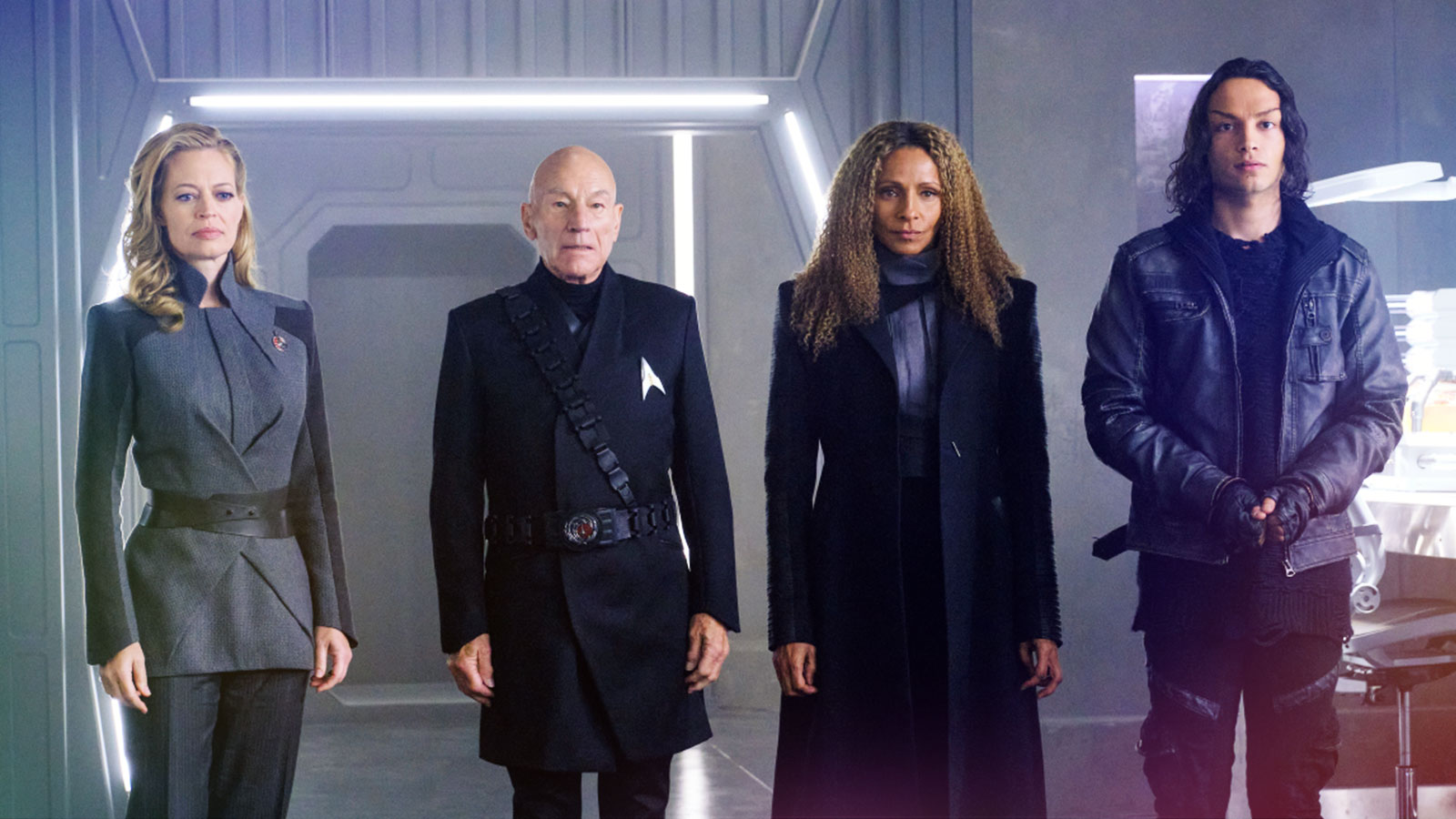 After an explosive premiere that partially set the stakes for Admiral Picard and his crew this season, “Penance” shows our heroes reacting to their sudden shift to an alternate timeline, one where these characters represent some of the worst humanity has to offer.

At the end of “The Star Gazer,” Q (John de Lancie) had whisked Jean-Luc Picard (Patrick Stewart) into an alternate reality following the admiral’s seemingly-fatal encounter with a new type of Borg Queen. Picard now faces a new reality: he is a feared and infamous general in the Confederation of Planets, an organization that spreads its destructive pro-human message throughout the galaxy, stomping out alien resistance without pause or mercy.

“What have you done?”

“Show them a world of their own making and they ask you what you’ve done. So human of you.” Picard and Q, as Picard learns that the Stargazer doesn’t exist in this alternate reality.

General Picard is known across the galaxy as a ruthless hunter of all who opposes the Confederation of Earth. Illustrating the dark nature of this timeline is the Earth itself; it seemingly never recovered from the climate crisis of years past and is now supported via a solar shield that barely keeps the planet alive. Otherwise, we see a painting of a heavily refitted Galaxy-class ship, the CSS Worldrazer, which was supposedly Picard’s flagship as he conducted his campaigns. Most visceral of all, Picard’s house is decorated with numerous weapons and skulls from those he conquered. Q notes explicitly a few skulls on display are those of Gul Dukat, General Martok, and Sarak – all characters Star Trek fans will recognize. The point is clear: General Picard enjoys wanton destruction and persecution, a characterization that appalls Admiral Picard.

Case in point of how this reality is different than the one we are used to: while the famous mantra we know and love is “…to seek out new life and new civilizations, to boldly go where no one has gone before,” Admiral Picard views a video of General Picard saying something slightly different while still retaining a few keywords: “We sought out and subjugated savage civilizations, boldly conquered war-like alien worlds.” This play on iconic dialogue is a great small detail by writers Akiva Goldsman, Terry Matalas, and Christopher Monfette that helps illustrate the difference between the “real” and alternate reality. And if that wasn’t enough to illustrate how terrible this alternate reality is, General Picard, in the same speech, asserts, “A safe galaxy is a human galaxy.”

Q exposits all this for Picard, and leaves the admiral to his own devices as he attempts to correct the timeline, but Q does promise one helpful thing: the admiral will have help. Why Q is testing Picard again is an intriguing story: apparently the timeline Picard now inhabits is one that is the result of one singular change Q made, a change that made Picard follow a different path. What that change is is anybody’s guess, but for now, that doesn’t matter. Picard needs to find his friends, who were also whisked away by Q, and try to correct the damage Q has done to the timeline.

Q also seems to be hiding something about himself. Picard reasons that based on Q’s behavior – his fury, his ruminations on time – the omnipotent being is unwell in some way. For now, this is only a hint at a potential plot thread, and nothing else is made of this observation, but we’re super curious about what could be impacting the all-powerful Q.

“Penance” is mostly an engaging look at our heroes adjusting to their sudden new lives. Seven of Nine (Jeri Ryan), for example, wakes up as the president of the Confederation of Earth, and if that wasn’t enough, this alternate Seven was never assimilated by the Borg – leaving her known as just Annika Hanson. She is also married to some unnamed Confederation official (played by Jon Jon Briones, who is father to Picard actress Isa Briones).

Of course, it’s not just Seven and Picard who inhabit this reality. Elnor (Evan Evagora), meanwhile, is participating in a rebellion against the Confederation’s anti-alien policies, and he is soon saved from arrest by Raffi Musiker (Michelle Hurd), who is apparently head of Confederation security. Cristóbal Rios (Santiago Cabrera) awakens on the bridge of La Sirena, leading an attack on Vulcan for the Confederation. He is quickly contacted by Seven and reports back to Earth to help figure out what is going on.

Agnes Jurati (Alison Pill), meanwhile, wakes up in a Confederation science lab with a special subject: the Borg Queen (Annie Wersching). You see, the Confederation is celebrating a special occasion the day we see our characters inhabit their alternate timeline bodies: Eradication Day, a day where the Confederation is publicly vanquishing their last major enemy. It’s a major spectacle, a public execution of the Borg leader overseen by General Picard himself in front of a riotous mass of Confederates.

The Borg Queen herself seems so wonderfully disturbing, from the way she mechanically turns her head, to her constant jittering (like machinery that’s not quite able to work correctly), to even her large, dark eyes along with all that makeup. We’re looking forward to her prominent presence in this season, especially since she turns out to be not only Picard’s ticket to travel to the past, but she has her own motivations for time traveling: getting back to a Borg Collective that isn’t conquered.

Picard and his crew find themselves reunited on Earth just before the general is scheduled to kill the Borg Queen in public. However, the Queen offers a keen insight, one that will help Picard correct the timeline. Because the Queen shares an awareness of time and space beyond the current timeline, she is able to identify when and where Picard and crew need to go to start correcting the past: Los Angeles of 2024. The Queen also asserts there is someone there to help Picard and crew, a “watcher” who they need to find.

With this knowledge in hand, our heroes stage an intense escape from Earth with the Borg Queen before the Confederation realizes their leaders aren’t who they think they are. But their escape attempt hits a brick wall when Seven’s husband is able to beam aboard La Sirena and, at least temporarily, stop their escape. Taken together, there’s no fleet action or bombastic explosions in this episode like there was in the last one, but that certainly doesn’t mean this episode is boring.

To the show’s credit, “Penance” nails the neo-Nazi vibe that the Confederation is clearly inspired by, and the entire organization feels like the antithesis to everything we know about the Federation. From the dark red-and-black Nazi-esque logo of the Confederation to the dark uniforms that seem like evil versions of the TNG movie-era garb, to even the dirty and crazed Eradication Day crowd itself (who are in a sense reminiscent of Q’s courtroom crowd in “Encounter at Farpoint”). All this doesn’t mean this episode is devoid of any kind of humor. Quite the opposite; Jurati is seemingly becoming the go-to source of comedic relief, and her scene where she learns who Seven really is in this timeline, as well as the scene where she makes up her and Seven’s relationship (Annika “Seven-Shot” Hanson!), is definitely chuckle-worthy.

Also more light-hearted is the tension that exists between the ill-fated romantic partners within our main cast. Raffi is understandably taken aback that Seven is not only president but has a husband. Likewise, Jurati and Rios can’t help but get into a bit of a squabble as the scientist is frantically trying to help the crew escape Earth. We actually don’t mind these relationships as they exist now, so it’ll be interesting if their travels through time will be the spark that makes the relationships work again. Right now, our hope is not.

We also want to praise this episode for tackling the exposition problem in a non-cringy way. Normally, one would assume that such a major change for our characters would require much expositional dialogue to get them, and the viewers, up to speed on what is happening in the Confederation timeline. But “Penance” accomplishes this with grace; at no point did exposition-heavy dialogue feel out of place or overly forced. Case in point: Seven smartly asks her husband to prove his attention to detail by having him recount what is happening on the day she “arrives” in this timeline, or Picard grimly watches a speech delivered by General Picard.

On a broader scale, “Penance” reinforces this season’s tone that we first witnessed in ‘The Star Gazer”; this season seems to be shaping up to be a proper sequel to The Next Generation. Be it the more familiar universe (what with the returning characters and numerous easter eggs) or the time-traveling, alternate reality-jumping plot, Star Trek fans are likely to get a kick out of the relatively little we’ve seen of this season. A few questions keep our minds reeling as we await the third episode: what will the Earth of 2024 be like once Picard and crew slingshot around the Sun? Who is the “watcher” Picard and crew are destined to meet in 2024? And while this likely won’t be answered until much later, what was the singular change Q made to the timeline?