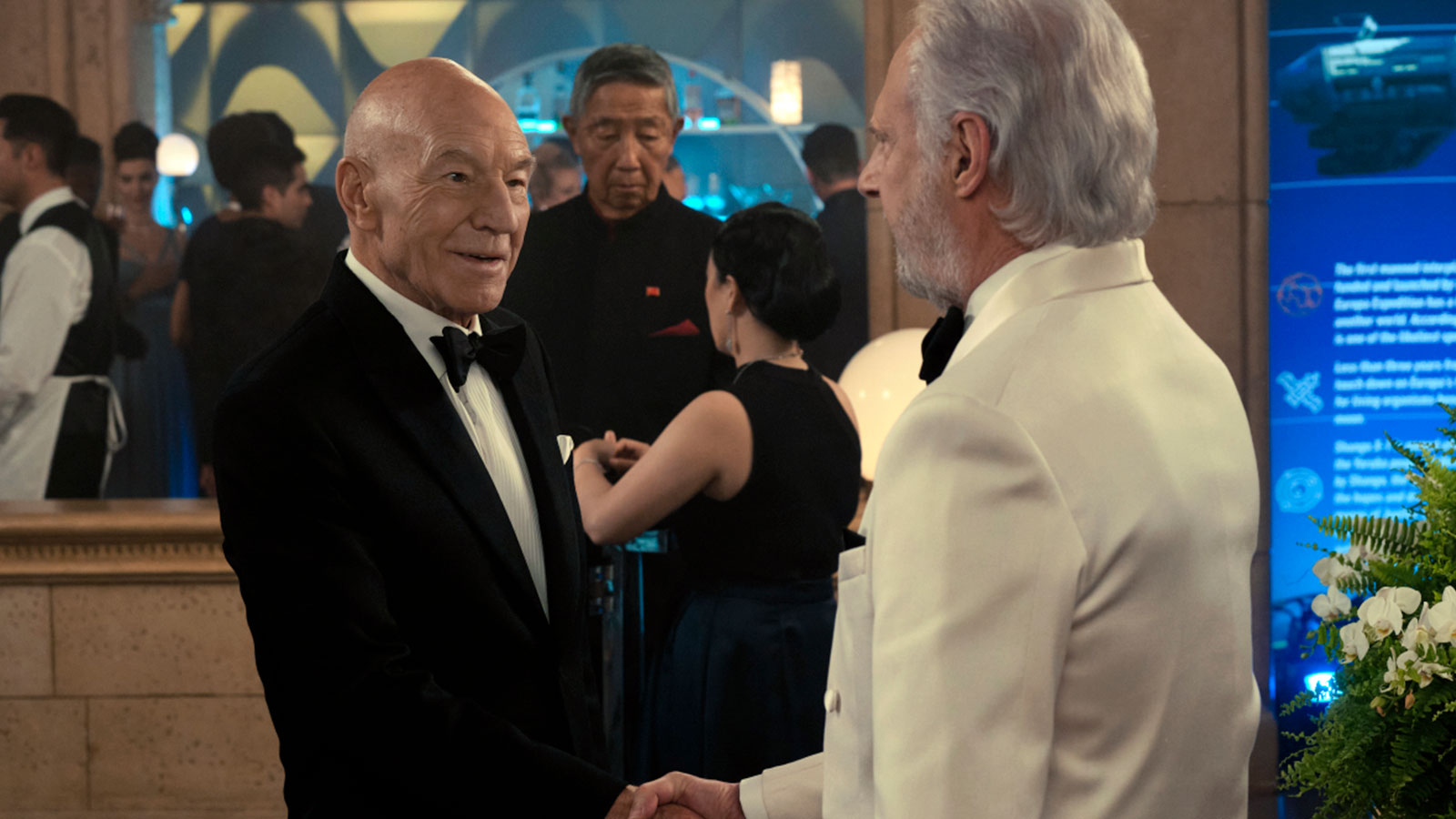 Despite its shorter length, the chillingly named “Two of One” ends up launching a few of our characters on courses that will have lasting ramifications for themselves, their time, and possibly even beyond.

The episode begins with Admiral Jean-Luc Picard (Patrick Stewart) in a bad way. He is unconscious and bleeding, and the characters around him are wondering if he’ll even survive what just happened to him. But of course, we’ll have to wait a bit before learning why Picard is on death’s door.

Flashing back to where the previous episode left off, Picard and crew are infiltrating the gala where they need to protect Renee Picard (Penelope Mitchell) from Q (John de Lancie). Remember, Q, now lacking his omnipotent powers, is trying to stop Renee from completing her mission to Europa, as that mission is somehow critical to keeping humanity from becoming the type of antagonistic, fascist, and all-around terrible people we see in the Confederation of Earth.

Besides the mission at hand, Agnes Jurati (Alison Pill) is dealing with her own problem: the Borg Queen (Annie Wersching) is very much a part of her mind, body, and soul. This causes her to do some things Jurati couldn’t normally do, like unexpectedly kiss her former boyfriend, Cristobal Rios (Santiago Cabrera). But that’s not even the most striking thing Jurati does in this episode.

Picard and Tallinn (Orla Brady) realize Renee’s anxiety about the mission is overwhelming her, and Picard asserts he must do something about it. On the way to intercept Renee, Picard is met by a familiar face, sort of: Adam Soong (Brent Spiner). Soong is at the gala because Q enlisted the scientist’s aid in removing Renee Picard as a threat to Q’s plans. Soong accomplishes this by using his wealth and influence with the Europa mission’s organizers to order the gala’s guards to try and capture Jean-Luc so the older man can’t interfere with Renee. But before the admiral is grabbed, the lights go out on the gala – and it seems we have the Borg Queen and Jurati to thank for that.

So, what’s even more unexpected than Jurati jumping Rios is how she and her inner-Queen help distract the gala guards and attendees as Picard makes his way to Renee. Somehow magically turning the spotlight on herself and having the gala’s band play for her, Jurati dazzles the crowd with song – something the Borg-less Jurati likely would never do. It’s an effective distraction, but the ploy sticks out in our mind as slightly non-sensical. We get that the Queen could issue some electro-magnetic pulse and shut down the gala’s lightning, but how do the pair control the spotlight and band?

Gripes aside, this scene is revealing, and not just because it turns out Alison Pill has a fantastic singing voice. The Queen is deeply connected to Jurati now; the flood of endorphins during Jurati’s performance only helped the Queen gain further control of the scientist, and this episode ends with Jurati wandering into L.A. with the Borg Queen clearly driving her body and mind. Two of One, indeed. What kind of chaos will the pair will produce in the next episode?

In any case, the pros and cons of Jurati’s singing scene are quickly left behind as Picard actually talks to his ancestor, and this exchange turns out to be one of the most memorable of the season thus far. Picard, the wise, older man, comforts Renee and encourages her to fight through whatever mental ailments are afflicting her – always hinting with a glimmer in his eye that he knows her much better than she realizes. In this conversation, we get some glimpses of what made Picard such an inspiring leader in his days aboard the Enterprise, and the ethos Patrick Stewart presents in this scene will likely trigger a surprisingly nostalgic reaction for fans of The Next Generation. At one point shortly before the episode catches up with its bloody beginning, Renee asks Picard if he wants to go with the Europa crew and help keep them calm on the mission. Indeed, that type of leadership is what Picard did so well in his prime decades ago. Picard is clearly intrigued by the half-serious suggestion, but of course, opts to let Renee travel her own path.

As he is walking the now mentally resolved Renee back to the party via an outside path, Soong has one more trick up his sleeve to ensure Renee doesn’t cause trouble for Q. Well, it’s not so much a trick, as an age-old way to really knock someone around: hit them with a car. So that’s what he tries to do but ends up hitting Jean-Luc instead after the admiral threw Renee out of the way.

Here is where we must ask another plot-related question: for all his smarts, why was Adam Soong the one Q approached about taking out Picard? All Soong does in this episode is ineffectively sic some security guards on Picard, and then hit the man with his car. Surely Q could have hired someone else to do this without going through the trouble of ensuring Soong’s loyalty via the promise for curing his daughter? We get the sense that there must be more to the story here, so we are content to wait and see how Soong’s relationship with Q plays out.

“21st century Earth isn’t what I thought it would be. Everything is so intense. All the cars, and the honking, and shouting. It’s dirty, there’s music everywhere. And the food is amazing.”

So, Picard is in dire need of medical attention, but since he doesn’t have any identification on him, sending him to a hospital is a bad idea. Luckily, Rios knows a good, discreet doctor: Teresa Ramirez (Sol Rodriguez). She ultimately determines that Picard is stable, but unconscious, and unable to revive himself from the coma he is in. This leaves few options except for Tallinn to suggest she go into Picard’s mind – using the same technology she uses to keep track of Renee – and try to rescue him. But this will have to wait until the next episode! We bet we’ll learn a lot more about Picard’s somewhat violent childhood thanks to this excursion, glimpses of which we saw more of when Picard was unconscious.

That’s hardly the only thought we’re left with after the quick but powerful “Two of One.” Adam Soong is clearly feeling guilty about the harmful action he took in service of Q, as he rather incoherently (drunkenly?) relates to his daughter. Because of her father’s behavior, in a bit of long-overdue snooping Kore Soong (Isa Briones) discovers Adam had many failed attempts at parenthood; he has been trying to create a child, and now she is his last hope at finally fulfilling that objective. This is an important revelation that not only informs our understanding of Adam Soong’s previous and future actions but cements Adam as a narcissist villain with somewhat of a God complex.

Suddenly, we are much more concerned about how he can continue to negatively impact our characters. But, this revelation seems majorly rushed into the end of this short episode. Sure, Kore is concerned about her dad coming home from the gala and waxing poetic about what a bad person he is and how she is his “life’s work,” but why would that intrinsically lead her to go into his (unprotected?) computer and super-conveniently discover all this information?

In any case, “Two of One” is a fantastic entry in this season, one that serves as an important tipping point for a few of our characters. This season of Star Trek: Picard has a penchant for keeping us frothing at the mouth for whatever answers the next episode may bring, and this week is no different.