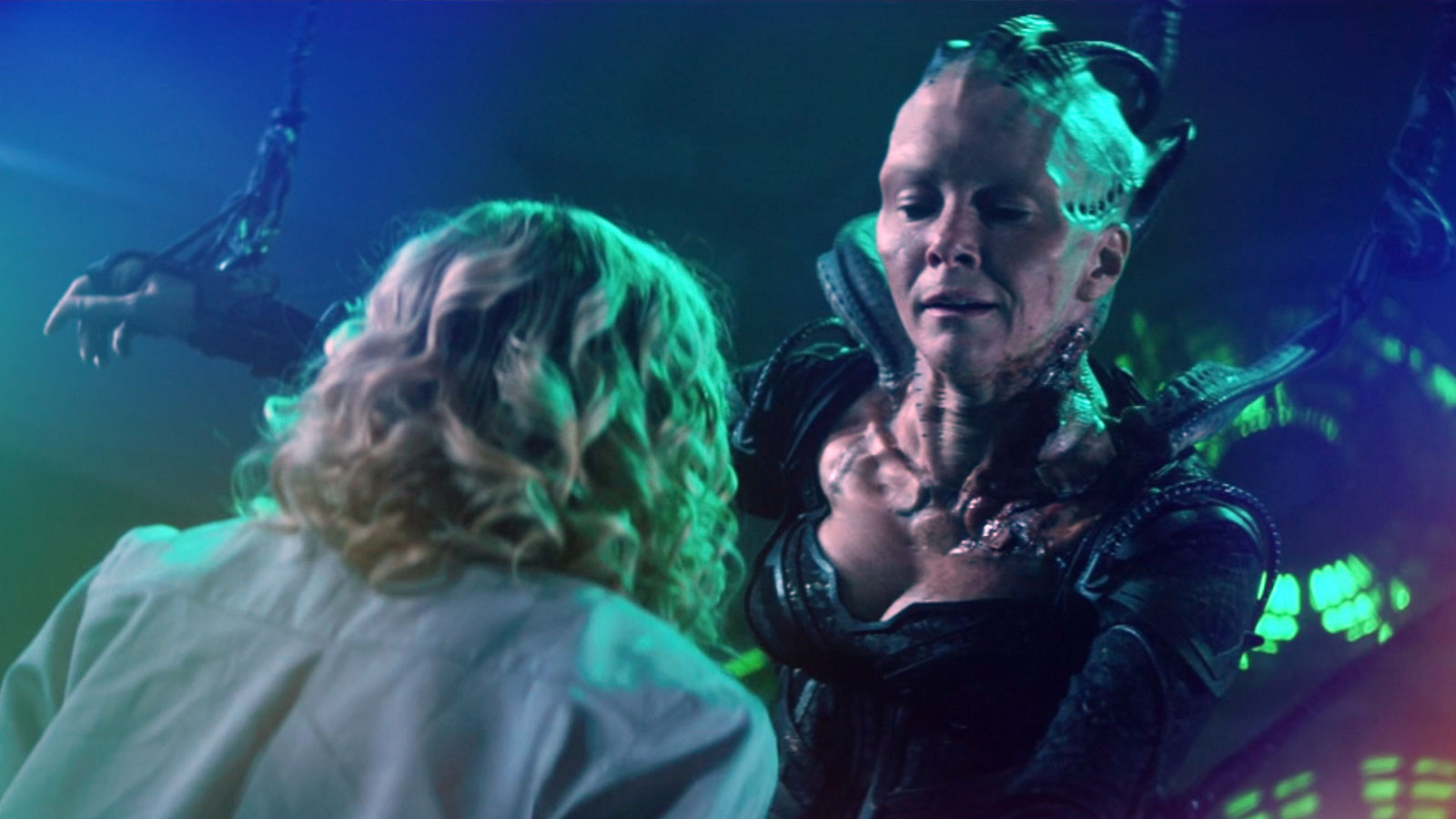 After a disappointing episode last week that nevertheless raised some intriguing questions about Picard and crew’s journey in the 21st century, we’re happy to say “Fly Me To The Moon” gets the season back on track and jolts agency into these characters in a big way.

Admiral Jean-Luc Picard (Patrick Stewart) has a new ally in his quest to stop whatever damage is about to happen to the timeline: Tallinn (Orla Brady), the Watcher who it turns out is the same type of supervisor of humanity as Gary Seven from The Original Series episode “Assignment: Earth” – a connection that was majorly hinted at in the previous episode. But who is Tallinn supposed to be watching? It’s a young woman who is about to head to Europa on a mission of historic importance: Renee Picard (Penelope Mitchell), ancestor of Jean-Luc.

This isn’t a terribly surprising revelation, considering how the Europa mission has been advertised pretty heavily in this season thus far, and how Picard mentioned to the graduating class at Starfleet Academy in the season premiere about his ancestor who explored the Solar System. Nevertheless, what is more unexpected is Renee herself and how she is dealing with her upcoming mission.

Thanks to Tallinn having access to Renee’s life, she (and now Picard) knows that Renee is struggling with depression and anxiety ahead of her mission. These mental issues are actually being encouraged by her therapist, Q (John de Lancie). Yes, Q, adopting a therapist persona, is actively trying to discourage Renee from completing her Europa mission. But why? Picard doesn’t know, but what he ultimately determines is that Renee failing her mission is the crucial event that Q was able to change to create the Confederation of Earth’s future. The mission is clear, then: protect Renee from Q’s machinations so she can complete her mission, lest humanity succumbs to greed, anti-alienism, and violence for the next few centuries.

If there is one thing this series has shown us, it’s that Jean-Luc Picard, a hero that he is, is a human with human feelings and the pros and cons thereof. Likewise, Renee is not an infallible hero she is apparently destined to be remembered as, and it’s to this episode’s credit that this message is confidently made but not overly pushed. Renee, a bona fide genius, is trying to navigate mental struggles, sure, but she is still set to complete her mission unless Q has his way. If the aim of this episode was to help point an encouraging light at those facing depression and anxiety, then consider it mission accomplished.

That leads us to consider another accomplishment of this episode: cementing Q as the predominant villain this season. The fact that he is exploiting Renee’s mental vulnerabilities for his own gain — and humanity’s loss — is just wicked. As Picard noted earlier in the season, something different is clearly motivating Q beyond his usual hijinks. But we’ll have to wait for future episodes to learn what exactly that motivation is.

Having Renee’s mission accomplished is easier said than done, of course. Picard and Tallinn return to La Sirena to gather his crew and implement a plan to help Renee stay away from Q. You see, astronauts who are about to embark on the mission are attending a gala in their honor before they go into the mandatory pre-flight quarantine, so Picard reasons he and his crew must attend that gala and watch out for Renee. Once she is in quarantine, she should be all set to complete her mission.

To get the crew access to the heavily secured party, Agnes Jurati (Alison Pill) goes in first with a fake ID and allows herself to be captured. Hypothetically, she’ll be able to hack into the gala’s security system and allow entry for the other crewmembers. The episode doesn’t quite get that far, though, as there is something up with Jurati that leaves the episode on a cliffhanger: the Borg Queen (Annie Wersching) is in Jurati’s mind.

Yes, let’s back up for a moment. Earlier in the episode, the Borg Queen, hanging limply from the ceiling of La Sirena as she was, decides to take matters into her own hands. With Jurati asleep in the nearby Picard estate (for some inexplicable reason), the Queen fakes a phone call to the police and gets an officer to come on board the ship. (Did Jurati leave the door open on La Sirena, thus allowing the police officer to waltz right in?) Jurati soon finds the Queen holding the officer hostage and decides to shoot her with an antique gun found in the Picard house. Before the Queen dies, however, she reveals that she is part of Jurati’s mind thanks to their partial assimilation in the episode of the same name, and furthermore inserts her assimilation tendrils into Jurati’s neck. So, as Jurati is sitting in the security room at the gala, the Borg Queen is very much a prominent part of Jurati’s mind. How much, though, remains to be seen.

“Kore, my child, if I could encapsulate all the knowledge I’ve gained through the years – through life experience and careful study – into a single pearl of wisdom for you, it would be this: people are idiots.”

Rounding out this episode is the story of Adam Soong (Brent Spiner), a brilliant 21st-century geneticist who is fighting to save the life of his daughter, Kore (Isa Briones), who has a rare, deadly, and heretofore incurable genetic condition. But not all is lost, as Soong gets a message from a mysterious benefactor claiming to be able to help him and his daughter. Who does this benefactor turn out to be but Q, who explains to Soong that he has a cure for Kore’s disease, but in return, Soong has to help Q by removing an obstacle: Picard.

Spiner, for his part, plays the desperate father role with conviction and determination. Viewers who are parents will surely empathize with him as he declares himself a hostage to Q’s machinations if it means saving his daughter. Don’t worry, fans, Spiner here isn’t phoning it in as just another Soong. Adam is a much different character than the other Soong Spiner played in Picard, and seeing what this desperate father does to help Q and thus save Kore is one of our major interests moving forward.

This episode leaves us with many questions we can’t wait to get answers to. First and foremost, how exactly will Soong help remove Picard? And what does “remove” even mean in this case? We’re also curious how exactly Q came into possession of Kore’s serum, to begin with — it surely wasn’t easy since Q is lacking his godly powers. Moreover, Jean-Luc explains in this episode that Renee Picard is destined to bring back to Earth what she thinks is a sentient lifeform from Europa, but that records from that trip are otherwise sparse. Sounds pretty important to us! And finally, how will Jurati suffer now that the Borg Queen is a part of her? The tapestry of this season is coming together, and there are plenty of questions needing answers as we head in the second half of this season.

Paramount+ is offering a 1-month trial of the service for free when you apply the coupon code BETWEEN at checkout.