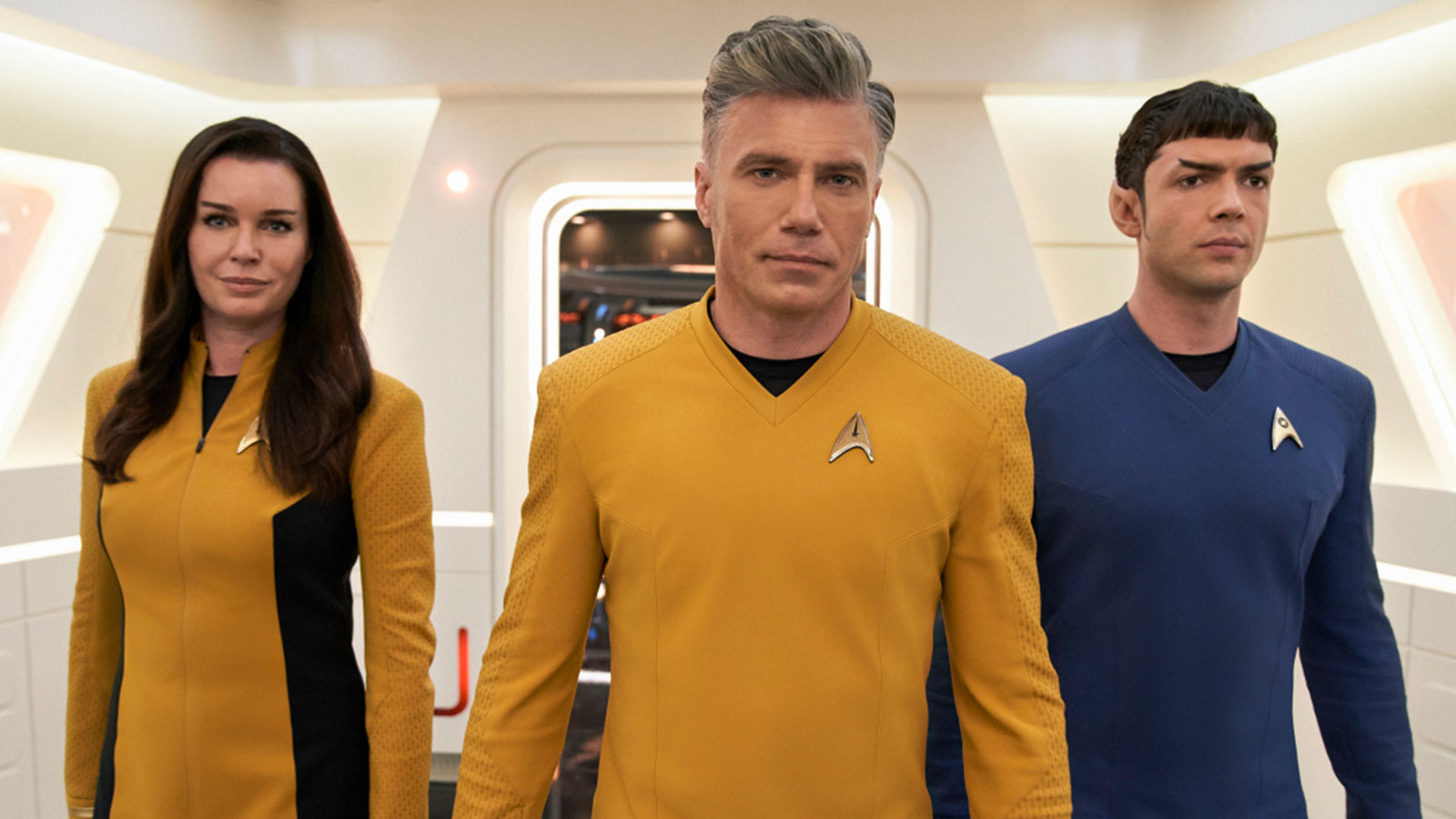 Ahead of the May 5, 2022, premiere of the highly anticipated Star Trek: Strange New Worlds, we sat down with members of the series’ cast to discuss their characters, the show itself, and entering into Star Trek fandom.

Coincidentally this happened on the three-year anniversary of the finale of Star Trek: Discovery season two — a season that brought Pike, Spock, Number One, and the U.S.S. Enterprise back into the franchise. We had the pleasure of asking Anson Mount (Christopher Pike), Ethan Peck (Spock), Rebecca Romijn (Una Chin-Riley), Babs Olusanmokun (Dr. M’Benga), and Melissa Navia (Lt. Erica Ortegas) some questions about working on Strange New Worlds, exploring their characters, and joining the Star Trek fandom.

TrekNews.net: Anson, you’ve been in this fandom for more than three years now. We’re curious: what’s the most striking thing that has happened to you since joining this franchise?

Anson Mount: Well, I have to lead with the most obvious answer, which is to see this fan movement to want to make this show happen. It has changed my life. And it goes beyond just another job, albeit at a particularly bad time for actors. But my inclusion in this universe has fleshed out my love for Star Trek. It has brought me into the family and culture of Star Trek. The fandom has given me the wherewithal to trust my ability to have a family. It’s given me a lot, and I’m very grateful for it. I think also meeting members of NASA and seeing how the show has inspired so many people have been striking things to happen to me. And meeting legacy members like Nichelle Nichols and Bill Shatner.

I don’t know, man. I struggle with words to get across how completely fucking weird this is. I’m the captain of the Enterprise. Can you imagine? It’s bizarre. It’s just there are so many times when you can say “why me?” before you shrug your shoulders and say, “well, I guess it is me.” But it doesn’t stop being surreal. And I hope that feeling continues throughout the entire thing. It’s a tremendous sense of not just luck, but responsibility.

TrekNews.net: Rebecca, what about you? What’s the most striking thing that has happened to you since joining this franchise?

Rebecca Romijn: Well, right now we are past the middle of our second season. We’ve made 16 episodes and we love them all. We’re so excited to introduce this show. It’s like the longest pregnancy in history. You know, I haven’t done too many of the conventions. I went to Mission: Chicago last weekend, and it was nice. I was introduced at eight years old to Star Trek: The Original Series by my mom. I know Anson was introduced to The Original Series at eight years old by his mother, too.

I think that’s not by accident. I think moms want to introduce their kids to Star Trek because, when you look into your child’s eyes – and I can say this as the only mother on our cast – you see curiosity and the need for exploration. And you want your kid to look universally and think totally outside the box, and The Original Series sparked a lot of conversation between my mom and me about whether we are the only ones in this galaxy, acceptance of people from all different backgrounds, and working in harmony, about exploration – these are all things that mothers foster in their children. When I said that at the convention in Chicago, all day long everybody I passed said, “my mom introduced me to Star Trek.” I kept hearing that over and over again. I love that. I hope we do that for a new generation of Star Trek fans.

TrekNews.net: Babs, you’ve been in your character now, like the rest of the cast, for a while now. You have at least one full season under your belt. How much of you, the actor, is in the character you play? Any similarities or differences that you think have cropped up over your time with Doctor M’Benga?

Babs Olusanmokun: I would say so. I would say his warmth is something that comes from me. I could be a little sharper with my language at times, but I’m working on it [laughs]. I think he’s a wonderful guy and I think I am, too. All we really have is the self. We can bring ourselves to [these characters] and they, of course, don’t have exactly our qualities. But our qualities and how we use them to engage what the character is on paper is what the character then becomes on screen. That’s the performance.

Whether [Doctor M’Benga] is always strong or vulnerable, or the fragility he might bring to certain moments and those choices and whether he decides to bring it or not bring it, those are the qualities that the actor must have. The engagement of them with the written word is what you ultimately see on screen.

TrekNews.net: Melissa, was it intimidating being cast in a Star Trek show next to not only fellow actors who were already established in Discovery but also on a show that was demanded, for lack of a better word, by the fans?

Melissa Navia: Yes, I’ll say that when I was booked for the role, you find out there’s a lot of Trekkies in your life. One of my brothers-in-law is a Trekkie and he texted me and had one question: “All I want to know is… is it Strange New Worlds?” I said yes, and he said, “this is the one we’ve been waiting for.” Oh, my goodness! So, I already knew it was a really big deal. And I was incredibly happy to have Anson, Rebecca, and Ethan kind of as our one, two, and three on the show because they had been on Discovery. And knowing that the fans loved them so much and it was the reason our show exists and it’s the reason I have a job right now… that meant a lot to me.

But we all felt a nervousness but in a good way. We had leaders at the helm who had already done this. Having Ethan, Rebecca, and Anson there… I kept saying at the start, if I had to pick a captain, it would be Pike. I just had absolute loyalty to the three of them. And being able to create this character next to these legacy characters, like Spock, Uhura, Doctor M’Benga, Nurse Chapel, Number One and Captain Pike… I spoke to some people who aren’t even huge Star Trek fans and they knew that Pike was there before Kirk. People know the backstory.

So, it’s been, on so many levels, a wild ride. I’m doing my best. I joke about how serious I am when I’m flying the ship. I know how the Enterprise runs. As soon as I think it’s just a prop in front of me, we might as well all go home. The responsibility is not lost on any of us. Every single day, I’m boosted by my incredible cast. I couldn’t ask for a better crew to step onboard with.

TrekNews.net: Ethan, we’ve been thinking about the production side of Star Trek shows like Discovery and Strange New Worlds, and we’re curious… from your perspective, how has shooting your own show been different from appearing in Discovery season two?

Our show is episodic, which is something we are all really excited about. [Show co-creator] Akiva Goldsman put it really wonderfully when he said they are “serialized emotion.” Each episode is its own standalone adventure, which is great because so often I am recommended shows by people, but I love to watch film because it’s a contained experience. You can have it in a 90 or two-hour or two-and-a-half-hour experience. It does something wonderful for you. So, I hope our episodes can be like that for people, and we can convert fans to our show and to the Star Trek universe because there are so many great iterations out there ready to be seen.

Note: This interview has been lightly edited for clarity and flow.