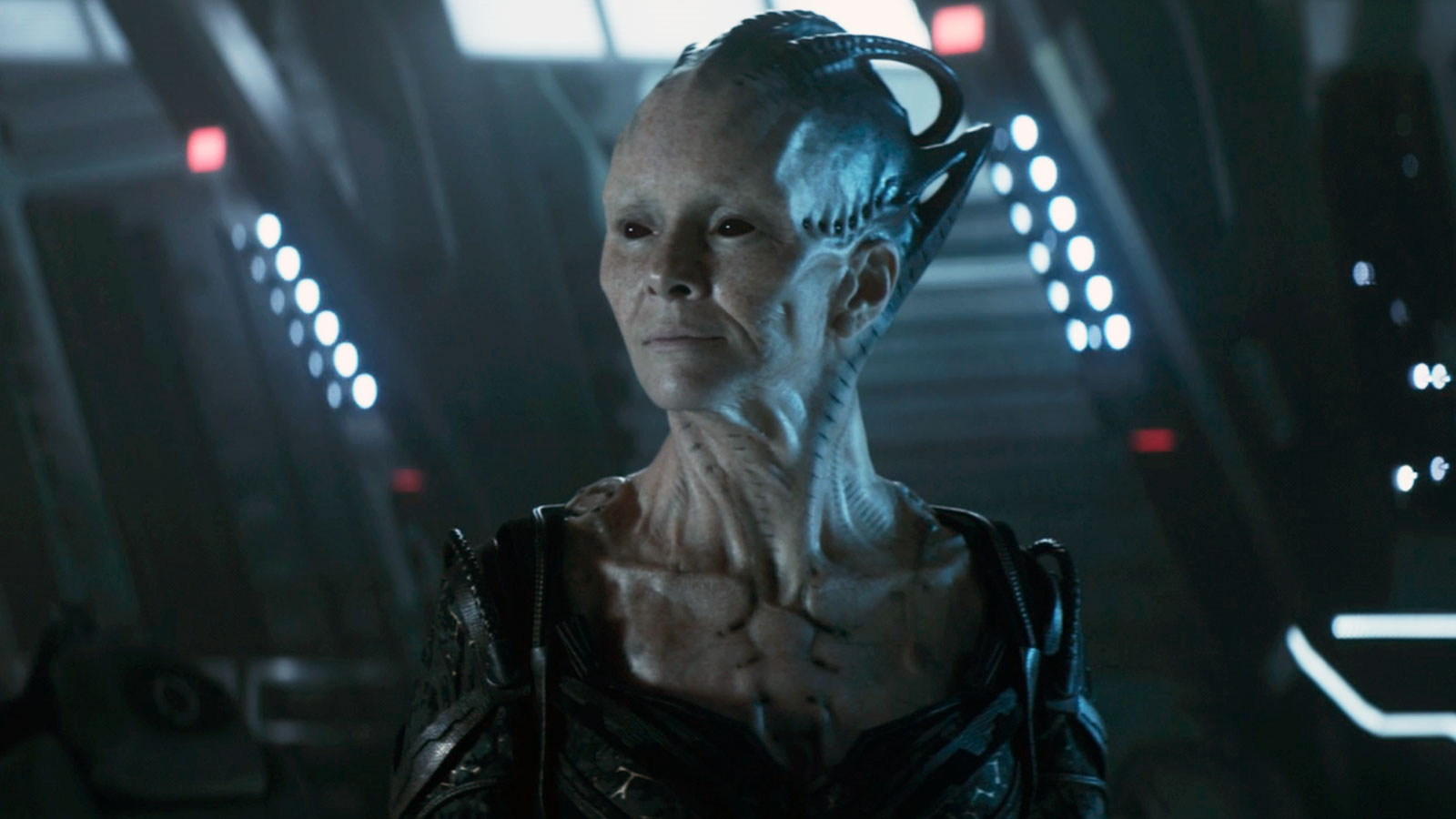 In the season’s intense and introspective penultimate episode, Picard’s traumatic childhood memories finally come into focus in a major way as he and his crew defend La Sirena against the Jurati-Queen hybrid and Adam Soong.

The partially assimilated Agnes Jurati (Alison Pill), under increasingly strong control by the Borg Queen (Annie Wersching), launches her attack on La Sirena. Cristóbal Rios (Santiago Cabrera), Teresa Ramirez (Sol Rodriguez), and her son, Ricardo (Steve Gutierrez), quickly flee the ship and make their way to the nearby Chateau Picard, the same place where Admiral Jean-Luc Picard (Patrick Stewart), Tallinn (Orla Brady), Raffaela Musiker (Michelle Hurd) and Seven of Nine (Jeri Ryan) beam in. So, briefly, the gang is back together, but the reunion is short because the Queen’s assimilated strike force (all carrying green laser sights on their guns, a neat homage to the lasers projected from Borg facial implants) is bent on taking out Picard and stealing the ship.

Jurati, however, is still in there and starts to dissect the Queen’s motivations in stealing the ship and assimilating the future. Jurati reasons that the Queen’s lust for perfection is just a ruse, and the Queen’s true motivation lies in her chronic loneliness, something Jurati can relate to.  Clearly, the bizarre relationship the two began earlier in the season is taking full form in this episode.

Early in the ensuing firefight, Rios is injured and ordered by Picard to bring Teresa and her son to safety using Tallinn’s transporter. That leaves Picard, Tallinn, Seven, and Raffi to try to overcome the armed force and take back La Sirena. A game of cat and mouse ensues through the dusty, run-down halls of Chateau Picard as the foursome breaks up into pairs.

Picard, of course, starts reliving some of his childhood while running through the halls of his former home. We’ve seen in “Monsters” how his mother, Yvette (Madeline Wise), was suffering from major mental issues, and his father, who was not the terrible, abusive parent Picard remembered him as, was actually trying to help Yvette get better. These memories are elaborated on in “Hide and Seek,” complete with another appearance by James Callis as Maurice Picard. In “Monsters,” there was one piece of Picard’s memory that we, and he, hadn’t experienced yet, something about the young Picard unlocking a room his father trapped his mother in. But don’t worry, we’ll come to that in due time.

Thanks to some handy flashbacks that detail the chateau as it existed in Picard’s childhood, the admiral and the Romulan use the tunnels beneath Chateau Picard to escape Adam Soong (Brent Spiner) and his minions. During this time, Picard remembers how his mother would retreat into her depressed mental state, and how it impacted her outlook on things she normally loved, like the stars. It’s in these scenes that we must give kudos to this show for offering such an honest look at depression. At one point, Yvette even tells Picard to remember her without the coldness she appears to radiate while in the throes of her melancholy and instead remembers her for the light she possessed in her good moods. How brutally heartbreaking.

“Stars. Did you know that space is so vast, so infinite, it takes billions of years for that tiny pinprick of light to make the lonely journey from its star to our eyes. The brilliance you see in the night sky, Jean-Luc, that exquisite light, is just an echo, really, of a star long since faded. Like me.” Yvette Picard to her son.

Picard and Tallinn’s escape through the chateau only works for so long. They are eventually cornered in the observatory Picard and his mom used to hang out in, but the timely arrival of Rios ensures Adam doesn’t terminate Picard, although the scientist does escape. Before leaving the estate, Picard super-conveniently finds the skeleton key used to unlock various doors in the chateau, including the one he used years ago to unlock the room his mother was trapped in. By finding the key, Picard’s memories come into focus in a way he never experienced before, and it’s here we get a clear-eyed look into an incredibly traumatic event that Picard subconsciously wouldn’t dare remember for 85 years or so.

The young Picard did indeed unlock the room where his father trapped his mother, but that meant Yvette was able to make it to another room and take her own life. The boy saw his mother hanging from the ceiling. By opening the locked door, Jean-Luc indirectly allowed Yvette to escape the room Maurice locked her in for her own safety.

This is an amazing revelation because now that we know this key piece of Picard’s life, we’ll never look at the character the same way again. Every time we see Picard on screen, from “Encounter at Fairpoint” and beyond, we’ll know this incredible trauma is living inside him – and he, for all intents and purposes, doesn’t even know it. He forced himself to forget the pain of seeing his mother hanging from a rope. How tragic is that?

For how much it exposes Picard’s life, we think “Hide and Seek” will be just as memorable as “Monsters,” as these two episodes, more than other Picard episodes, validate the existence of this show by giving us new and complex layers to its title character. But since this is a Star Trek episode, this particular storyline does end on an enlightening note, as Tallinn asserts that the love Picard had for his mother, and the love his mother reciprocated to him, was the most important thing to come out of his traumatic childhood, and it indeed informed the man Jean-Luc would become.

Once the emotional brunt of this storyline settles, the events surrounding Yvette do warrant some questions. Picard claims he was always told his mother was ill, and that presumably was enough explanation for him for her death, but how exactly was he told she died? Were there any consequences to the young Picard witnessing his mother’s death? Moreover, Picard’s mother took her own life in the 24th century: how did medical science fail her in treating her condition? Did she ever even seek treatment? We feel there’s plenty of backstory to be had here, but for the purpose of this episode, we’re fine without it. Perhaps we’ll get other Picard tie-in media that details Jean-Luc’s upbringing?

Patrick Stewart kills it in this episode, and especially in the voiceover monologue that describes how his mind warped his childhood memories to subconsciously protect himself from that tragic moment. Think about how important this episode is for Stewart. He has played Jean-Luc Picard for about 185 episodes of television and in four movies. Now, his character gets a background that completely changes how we perceive Picard. It’s a monumental milestone, and we aren’t surprised he brings his all to the table in “Hide and Seek.”

While all this is happening in the Picard estate, the scenes onboard La Sirena are perhaps even more consequential. Seven and Raffi eventually make it to the ship and are left to deal with the Jurati-Queen, although we know by this point that Jurati does have a decent measure of control against the Queen. In some smart camera work, Jurati is at times replaced by Annie Werschingas Jurati and the Queen have a mental faceoff. Jurati, in a bit of inspired brilliance, has placed the activation codes for the ship inside a hologram – one that takes the form of Elnor (Evan Evagora) – who helps keep the Queen from taking the vessel.

When Seven and Raffi get to La Sirena, seeing Elnor is a shock for Raffi, as you can imagine. She takes the opportunity presented by the hologram’s authentic Elnor persona to explain how she was actually worried about herself being alone if Elnor were to go back to the Qowat Milat and not join Starfleet, as we saw in “Mercy.” This is some much-needed reflection on Raffi’s part, and even though we question why Raffi feels she has the time to explain this to holo-Elnor, or how exactly the hologram possesses such an intricate understanding of the real Elnor’s thoughts and feelings, we’re thankful to see Raffi unburden herself a bit from her intense guilt over Elnor’s death.

Raffi and Seven don’t fare too well in a fight with the Queen, and Seven is actually mortally wounded by some quick-moving Borg tentacles. With her friend dying on the ground, Jurati manages to wrestle control from the Queen long enough to strike up a fairly important conversation with the Queen.

Jurati asserts that all the Queen really wants is “connection, longevity, and discovery.” Those things are at the heart of who the Borg are.  Jurati explains that the Borg accomplish this by not giving their victims a choice in being assimilated. But what if the Borg only assimilated those who wanted to be assimilated? As Jurati notes, the galaxy is full of people like the two of them who long to belong.  So, the Queen and Jurati strike a deal that we bet has major implications for the season finale and premiere.

Jurati’s proposed plan – to collect those who yearn for a second chance and allow them to voluntarily join a new kind of Borg collective– is at once remarkably similar and different from everything we know about the Borg. As Jurati says, this new collective would be based “not on assimilation, but salvation.” What an intriguing idea! The Queen agrees to this plan, and Jurati and the Queen leave Earth with La Sirena, which means Picard and crew must find another way home after they complete their mission.

Before they go, Jurati persuades the Borg Queen to help repair the wound Seven suffered. After all, Seven is the kind of person – one suited to redemption and a longing to belong someplace – that Jurati and the Queen are going to attract to their new Borg collective. This repair process means Seven now has her Borg implants again, after enjoying not having them since being in 2024.

Before she leaves, the Queen imparts a message to be delivered to Jean-Luc: the Europa mission must not be postponed. For it to succeed, there must be two Renees: one Renee who lives, and one who dies. Whoa, what? This assertion comes out of nowhere, and we’re super curious to see what the Queen means by this. We’re assuming she means that because the Renee in Picard’s history lives through her mission, the Renee in 2024 must die, but who knows at this point. Is there more time travel trickery to be had?

There is only one episode left, so that means we have yet to see Soong’s last attempt to stop Picard, whatever Q’s endgame in this season is, how Picard and crew make it home, and how the season premiere plays into all of this. If the season finale will be as personally intense as “Hide and Seek,” then we’ll be in for quite a ride. As it stands, this episode is a highlight for not only this season, but the series’ run overall, and it marks a major moment in the history of one of science fiction’s most beloved characters.