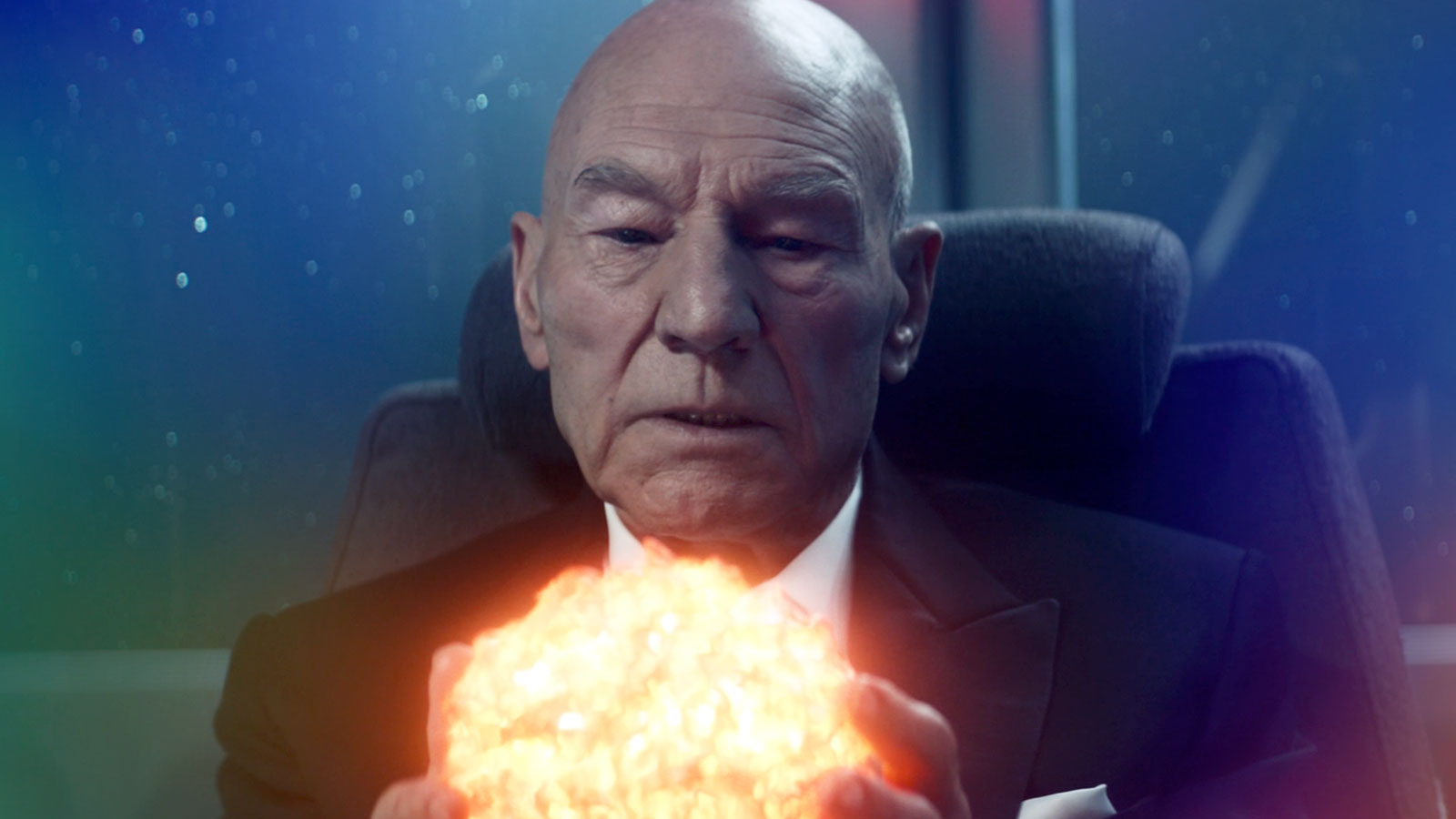 Patrick Stewart and a special guest star shine in an episode that not only intensely moves the season’s plot forward, but helps inform our understanding of a hero we’ve known and loved since 1987.

The end of the last episode saw Admiral Jean-Luc Picard (Patrick Stewart) in a coma following him saving Renee Picard (Penelope Mitchell) from Adam Soong (Brent Spiner). Now trapped in his own mind, it’s up to the older man, with a little help from Tallinn (Orla Brady), to pull himself back to the present, even if that means looking back at his distant past and confronting his most personal demons.

Picard’s mind invokes a peculiar scene: him talking to a Starfleet psychologist (guest star James Callis, of Battlestar Galactica fame) onboard a nameless Federation starship. The younger man is trying to gain some insight, via a “routine psych evaluation,” into Picard’s mind and why he always keeps relationships at arm’s length, a key question that this season first introduced in “The Star Gazer.” To help open his mind to self-analysis, Picard is encouraged to tell a story, and the story he conjures is based on his childhood. Set against a theme of knights, princesses, and medieval times, young Jean-Luc (Dylan Von Halle) and his mother, Yvette (Madeline Wise), try to escape Picard’s abusive father. But is that really what’s going on?

As Picard weaves this tale to the doctor, Laris has entered his mind, playing the part of someone helping a young Jean-Luc as he escapes into the basement of Chateau Picard. The imagery that permeates Picard’s recollections of his childhood are certainly not pleasant; clearly, Picard as a young boy was deeply scarred by the hostility and ill feelings his father’s personality and actions impacted on his family. In this way, this episode plays much like a horror movie, complete with a dark and muted color palette and horrific imagery to accompany the places and people in Picard’s mind.

Ultimately, Picard is able to meet up with Laris, his younger self, and the doctor in the same room, and this is where a major revelation occurs that will have lasting ramifications for Picard’s past, present, and future: the doctor is actually a manifestation of Picard’s father, Maurice, and the violence Picard remembers from his childhood came not because his father was an abusive, aggressive fiend, but because his mother was experiencing major mental issues. No matter what he did, Maurice couldn’t help her fight the “circles of terrible darkness” she was experiencing. Jean-Luc admits he might have never actually known his father, after all. But before these sequences in Picard’s mind ends, Tallinn sees the young Jean-Luc take out a key and seemingly go to let his mother out of the room his protective father locked her in.

Finally, awakening from his coma, Picard, focusing on the mission to stop Q, doesn’t take too much time to digest this revelation, which is too bad. But let’s consider how complicated Picard’s childhood was. His mother, who until now is remembered as a loving, comforting force in his life, was actually someone haunted by intense demons. The young Picard did not have the awareness to understand how his father tried to protect Jean-Luc from his mother’s deep depression. In one of the most touching moments in the episode, Laris comforts the young Picard and asserts that it is (or will be?) incredible he will go on to be such an inspiring leader despite this traumatic childhood. It’s a wonderful message for those who may have also experienced trauma. Interestingly, this episode asserts there is more to this story than Picard and Tallinn illuminated, but that’ll have to wait.

We also want to praise James Callis here for his portrayal of Picard’s father. Callis clearly carefully considered how to play such a vital figure, and thus we can see where Jean-Luc got his gravitas and analytical mind. Callis owns every scene he is in, and when he and Patrick Stewart are head-to-head, you can’t help but watch intently. Considering there is more to tell of Picard’s childhood story, we’ll likely see Callis again; as far as guest spots go, he will likely be remembered as one of Picard’s best.

“You hold everyone at arm’s length. Lest… what? Perhaps there’s a version of yourself that you are hiding. Something you’re afraid others will see. A darker version, perhaps? A secret shame. A guilt.” Maurice to Jean-Luc.

Realizing that the way to beat Q at this game may be to understand him and his motivations better, Picard suggests to Laris that they summon Q to get a better read on the situation. Of course, Laris doesn’t have that ability, but Picard knows who does: Guinan (Ito Aghayere). So, we are soon back in the bar on 10 Forward Avenue, and Picard urges Guinan to summon Q, which the El-Aurian is actually able to do, in theory.

It’s in this scene that we get some brief but noteworthy backstory about the Q and Guinan’s species. Ever since “Q Who,” we knew there was some bad blood between those two species, but no details were ever given… until now. Apparently, there was a long “cold war” between the Q Continuum and the El-Aurians, and the war eventually ended with the two sides imbuing a fancy bottle with the essence of the war and its resolution. As Guinan explains, El-Aurians place great importance on food and drink, so this symbolism seemed appropriate. Somewhat inexplicably, Guinan happens to have in her possession the exact bottle that holds the essence of this cold war, so if she were to take the top off the bottle, the spirit of the Q-El-Aurian conflict will escape, and that should be enough to summon Q.

Forgetting for a moment how wildly convenient it is that Guinan keeps this important bottle in her bar (where it is surely at risk of theft, breakage, or any other kind of harm) this scene marks a remarkable moment for Star Trek canon. For years, fans have wondered why Guinan had such a visceral reaction to seeing Q in “Q Who,” and now we have a few details about this long-simmering conflict. That’s pretty cool! We’ll likely learn much more in the coming episodes, but for now, we’re appreciative that Picard is helping shine light on some unexplored corners of Star Trek lore.

Alas, Q is not summoned (most likely because he has lost his powers, something Picard and Guinan don’t know), but before they can ponder too much about why the bottle didn’t work, a man enters the bar. After some unassuming and cheeky banter with Guinan and Picard, the man whips out a law enforcement badge and arrests them. Apparently, a security camera caught Picard beaming into L.A. back in “Watcher,” and clearly such suspicious technology caught someone’s interest. If you ask us, we’re thrilled such glaringly poor decision-making on Picard’s part caught up with him.

Outside of Picard’s intensely personal storyline, other things are happening in 2024 Los Angeles. Doctor Agnes Jurati (Alison Pill), now mostly out of control of her body as the Borg Queen (Annie Wersching) gains greater and greater influence, is rogue in the city and trying to absorb as many endorphins as possible; such a chemical reaction grows the Queen’s power over Jurati. Raffaela Musiker (Michelle Hurd) and Seven of Nine (Jeri Ryan) try to catch up to Jurati, now realizing that the Queen has indeed infiltrated the scientist’s body. Seven asserts enough endorphins would give the Queen the ability to assimilate others, L.A., and even the entire world.

Cristóbal Rios (Santiago Cabrera), meanwhile, tries to handle Teresa Ramirez (Sol Rodriguez) as she learns that Rios, Picard, and the others are not from 2024. In fact, Rios, in a bit of tongue-in-cheek reference to a similar line in The Voyage Home, admits to the doctor that he is indeed from Earth, but that he “works in outer space.” To seal the deal and help prove to Teresa he has good intentions, Rios takes her and her son to La Sirena. Clearly, Rios is way past being careful not to “step on butterflies,” as Jurati cautioned him against when they first landed in 2024. What impact will having Teresa be “in the know” have on this mission?

Taken together, “Monsters” turns out to be an unmissable episode of Star Trek: Picard. It’s a powerful portrayal of Jean-Luc Picard’s mind and history, a portrayal led strongly by the magnetic Patrick Stewart and James Callis to remarkable effect. The fact that there is more to Picard’s childhood story leaves us on the edge of our seats. And consider this: what better reason is there for Star Trek: Picard’s existence than to illuminate more of this hero who we thought we knew everything about?

We’re looking forward to when Picard has a moment to slow down and reflect on the major revelation he experienced in this episode, but that’s just one thread “Monsters” leaves us anticipating. Will Jurati fully succumb to the Borg Queen’s manifestation? What will happen now that Picard and Guinan are in police custody? And how will Renee’s mission play out? There are three episodes left in this season and plenty of questions to answer, including how all this relates back to the premiere and what happens on the Stargazer’s bridge. This season has been a wild journey so far, and we’re super excited about what we are going to see in the final episodes. 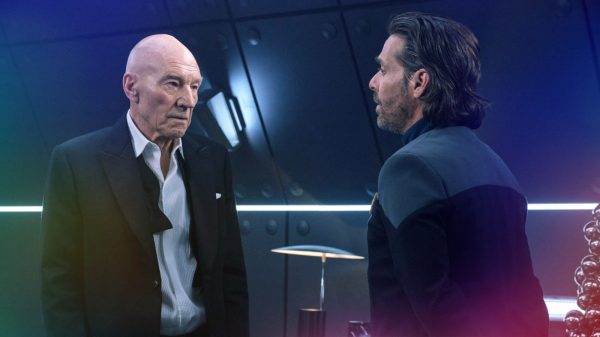