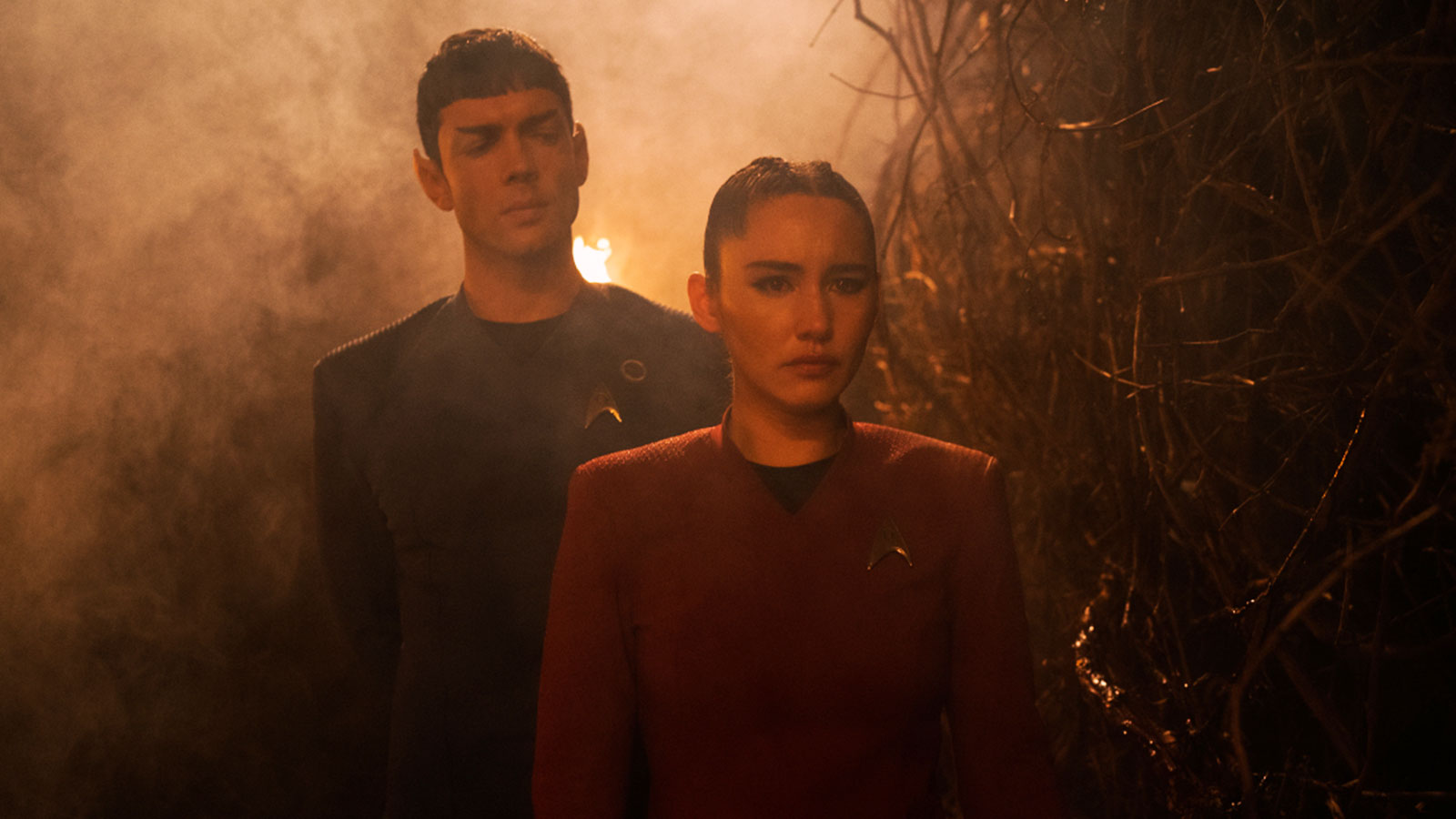 Star Trek: Strange New Worlds gets another character-centric episode in “Memento Mori” – although not the character you might expect – as the Enterprise faces off against a ruthless and unseen enemy: the Gorn.

Remember, this episode takes place canonically before The Original Series’ “Arena,” the classic episode that saw Captain Kirk fighting a Gorn, so at this point, our heroes, except for La’an Noonien Singh (Christina Chong), know nothing about the Gorn except for how ruthless they are fabled to be. Case in point: the Gorn lures the Enterprise into a trap by distracting the Starfleet crew with an innocent cargo vessel near Finibus III. Thus, Captain Christopher Pike’s (Anson Mount) defenses are down when a Gorn ship, fresh from picking off the inhabitants of the Finibus III colony, comes out of nowhere and wreaks havoc on the Enterprise.

Under the advice of Noonien-Singh, who is the only person even close to being an expert on the Gorn thanks to being kidnapped in her youth, Pike turns tail to even the odds. Using a convenient nearby black hole and a gas giant, the Enterprise initiates a game of cat and mouse with not just the Gorn ship that attacked them, but two others that join the hunt. During these tense sequences in the gas cloud, you’d be forgiven if you immediately think of The Wrath of Khan, “Balance of Terror,” or even The Hunt for the Red October. Those are certainly great influences if you ask us.

Yes, this episode is as militaristic as it sounds, and it’s a welcome change of pace from this season’s previous episodes. In “Memento Mori,” the Enterprise herself takes center stage; the heroic ethos the ship projects manifests clearly as Pike and others struggle to keep the vessel in one piece against overwhelming odds. While the crew exercise keen strategy and problem-solving to help save the day, it’s the Enterprise herself that makes it happen through sheer force of will.

“The Federation teaches that if we can find a way to emphasize with an enemy, then they can one day become our friends. They’re wrong. Some things in this universe are just plain evil.” La’an Noonien-Singh, on the Gorn.

The hunt around the black hole ends up somewhat a stalemate, but the crew soon starts racing against the black hole’s influence and the Enterprise’s buckling hull integrity to figure out how to overcome the Gorn’s prowess. As part of a scouting mission to judge the enemy’s strength, Noonien-Singh and Spock (Ethan Peck) pilot a shuttle through the gas clouds and sight the Gorn ships mysteriously flashing lights at each other.

The security officer, remember, was once captured by the Gorn and narrowly escaped. She knows a bit about the reptilian species, but can’t recall crucial details from her subconscious, including what those flashing lights between the two Gorn ships might mean. Luckily, Spock can mind-meld with her to help them remember a key piece of information, and in the process, we get some glimpses of the harsh, horrendous condition Noonien-Singh lived in with her family while in Gorn captivity.

As Noonien-Singh remembers, the flashing lights are a kind of morse code, a code that was previously broken by her brother on the Gorn breeding planet. How her brother was able to survive long enough to author a reference book for Gorn communication is a bit fuzzy, but in any case, the pair are able to use the language to fool the larger Gorn ship into thinking its smaller brethren has intruders on board. The larger vessel wastes no time in destroying the smaller ship. This, combined with some trickery tactics from Captain Pike earlier, leaves only one Gorn vessel left.

Interestingly, the mind-meld works both ways, at least for a few moments, and Noonien-Singh learns Spock once had a sister, and he lost her in some way. Spock, of course, isn’t keen on sharing details. This revelation about Burnham doesn’t have time to play out in this episode, but we’re curious if Noonien-Singh learning about Spock’s mysterious sister has any consequence in this season.

Elsewhere on the ship, Cadet Nyota Uhura (Celina Rose Gooding) and Chief Engineer Hemmer (Bruce Horak) have a problem of their own. Thanks to the damage done by the Gorn ship, a coolant system in the Enterprise’s cargo bay is set to explode unless the injured Hemmer can walk Uhura through the process to disarm it. To no one’s surprise except perhaps her own, Uhura is up to the task, and the pair ultimately repair the cooling system and release it from the Enterprise to fool the last Gorn ship into thinking the Starfleet ship was destroyed as it tried to escape via a daring blitz through the black hole’s accretion disk. The Enterprise exits the battle beaten, somewhat broken, but still cradling her crew.

We’ve already seen the young Uhura out of her comfort zone in “Children of the Comet,” so seeing her first doing a cadet tour of duty in engineering, and then powering through this dangerous situation, isn’t exactly a novel idea for her. But this doesn’t mean her character doesn’t stand a chance to grow, and, perhaps more importantly, influence the smug chief engineer.

Uhura suffers much trial and error as she tries to disarm the explosive device, and ultimately teaches Hemmer a thing or two about how a non-engineer can still pull off feats of technical brilliance. Hopefully, the over-confident and arrogant Hemmer, who bore little goodwill toward Uhura before their bonding time in the cargo hold, gets knocked down a few notches thanks to the communication officer’s display of creative thinking and dedication.

“Memento Mori” does do Hemmer a few favors, though. We learn he is, at heart, a pacifist, and insists he won’t fight for Starfleet, but he will “defend its ideals.” That sounds like a recipe for conflict down the line, so we’ll be curious to see if Hemmer’s pacifism is put to the test. In any case, having this ideology be a driving force for him adds some much-needed development to the character after his fairly one-note introduction in “Children of the Comet” and “Ghosts of Illyria.”

Framing this entire episode is Starfleet Remembrance Day, a time for crews across the fleet to pay homage to their previous assignments and those lost in the line of service. For example, Noonien-Singh, thanks to her experience re-visiting her Gorn captivity with Spock, ultimately bears the S.S. Puget Sound pin – the ship she was on before her Gorn capture – after not wanting to revisit history earlier in the episode.

Similarly, the weight of command leans a bit more heavily on Pike before, and especially after, the Gorn engagement. During the events of this episode, a few Enterprise crew members are lost, including some whom Pike deliberately sent to their fates to help save the rest of the ship. Understandably, this only compounds Pike’s command burden. Indeed, Starfleet Remembrance Day, and the ensuing Gorn fight, are reminders that everyone dies… or as one might say in Latin, memento mori. Pike can certainly relate to that sentiment.

Taken together, “Memento Mori,” much like its predecessors, takes great pains to offer thrilling introductions for the series’ characters. For the series premiere, it was mainly Pike, Spock, and La’an Noonien-Singh who were introduced (or re-introduced) to the audience. For the second episode, Uhura took the focus. The third episode spotlighted Una Chin-Riley (Rebecca Romijn), Doctor M’Benga (Babs Olusanmokun), and Hemmer. “Memento Mori” offers an introduction not for a flesh-and-blood character, but to the vessel that shepherds and protects the Strange New Worlds crew. It’s clear in this episode that Captain Pike and his crew place an enormous amount of trust in their ship, and they wouldn’t be the heroes we know and love without her.

Our major character takeaways from this episode aren’t just of the Enterprise.  We gain decent insight into Noonien-Singh’s horrific experiences with an enemy that remains as enigmatic as ever. Moreover, the Gorn are shaping up to be real monsters, beings with no moral center and an instinctual need to hunt even advanced sentient life, like humans. What this season’s endgame of Noonien-Singh’s experiences with the Gorn is anybody’s guess, but what’s clear is that her ordeal impacted the very core of who she is, even down to how she presents herself to the crew. She is jaded by her childhood suffering, and it impacts every other aspect of her life.

Finally, we really enjoyed how Strange New Worlds hooked into Discovery the way it did in the series premiere, so touching on Spock’s sister in this episode is a welcome revelation. What will change now that the Enterprise’s security officer knows about its science officer’s secret family history? Will it even matter to her? This is just one thread we expect to see again in this season, along with Pike’s fate, Noonien-Singh’s Gorn experience, Number One’s Illyrian nature, Doctor M’Benga’s daughter, and Spock’s love interest.