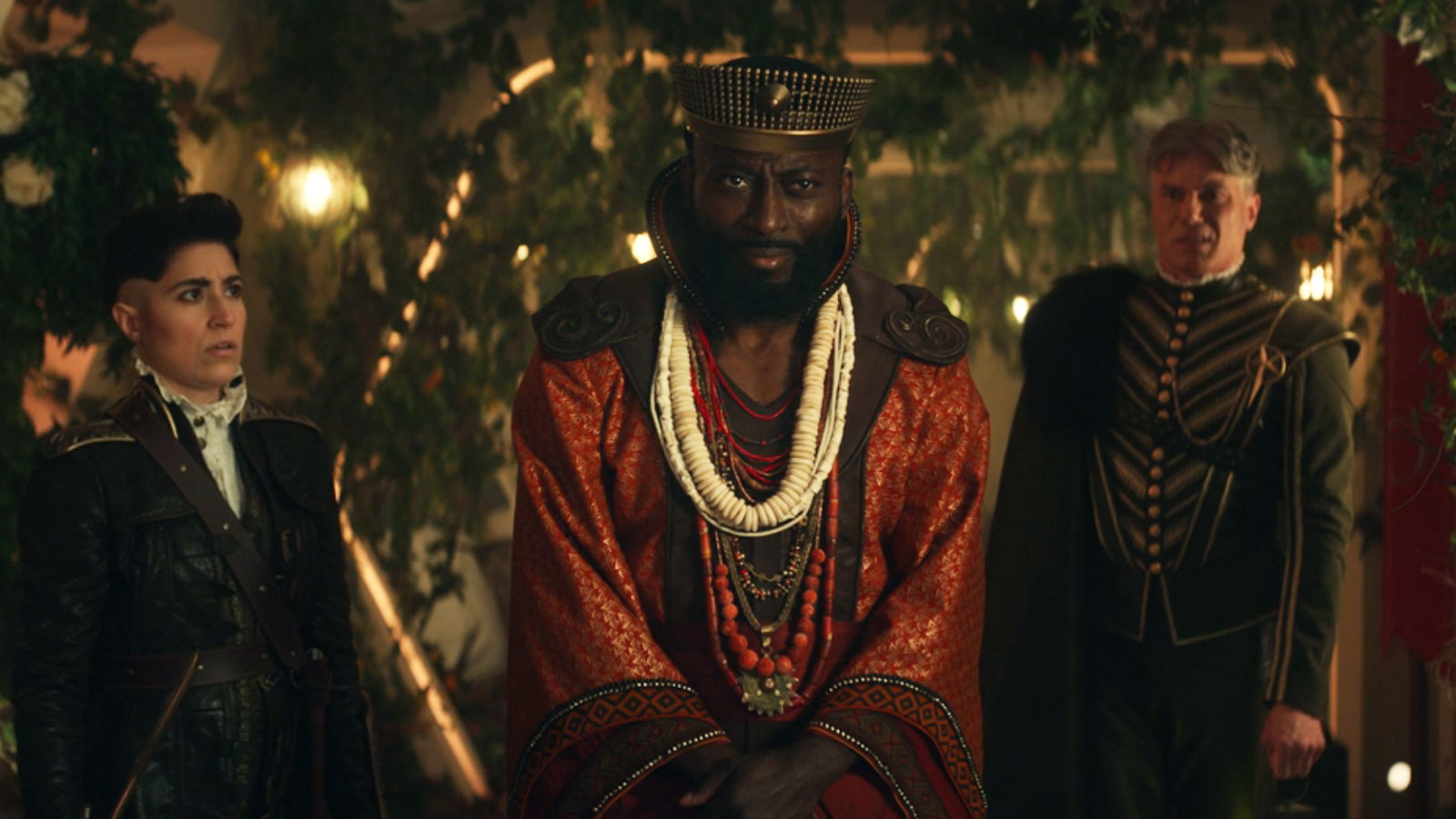 Star Trek: Strange New Worlds delivers what at first appears to be a campy science-fiction-fantasy episode, but it ultimately grows into a far more poignant tale about what a father is willing to sacrifice for his daughter.

The story focuses on Doctor M’Benga (Babs Olusanmokun), a nice change of pace after not seeing the character utilized all that much except for the ongoing subplot about him trying to cure his terminally ill daughter. The episode’s beginning sees the doctor reading a fantasy book to Rukiya (Sage Arrindell), who is steadily declining in health. She complains the story always ends the same, and she would like a new ending. M’Benga, the compassionate and optimistic father, asserts that when she is older, she’ll be able to invent her own ending.

After putting his daughter “to bed,” he resumes his search for a cure, and apparently, the medical knowledge he gained from the Majalans in “Lift Us Where Suffering Cannot Reach” isn’t doing much. During his experimentation, the doctor accidentally inhales a funky chemical substance, but he doesn’t display any symptoms… but will that stay the case for long?

While the doctor is busy with his daughter, the Enterprise is peacefully exploring a nebula, the kind of scientific work Captain Christopher Pike (Anson Mount) welcomes after recent events. Just as the ship is about to complete its work, something traps the Enterprise in the nebula, and Doctor M’Benga suddenly finds himself in what appears to be scenes directly out of his daughter’s book, The Elysian Kingdom.

Star Trek is no stranger to wacky and tacky episodes where characters play dress-up or assume alternate identities. Such episodes allow the cast to break out of their typical characters, the writers to break out of their typical stories, and the audience to take a break from familiar places and people.  Just about every Star Trek show has done this at one point or another, be it the likes of “Our Man Bashir,” “Elementary, Dear Data,” “Qpid,” “Stardust City Rag,” “Learning Curve,” etc. Normally, these episodes relied on the holodeck for such shenanigans, but this time the mystery behind how and why the crew of the Enterprise have unwittingly taken alternate characters within a fantasy story is anyone’s guess.

Strangely, only Doctor M’Benga, and later, we learn, Hemmer (Bruce Horak), are unaffected by the sudden switch to the fantasy world. Luckily, the doctor has read The Elysian Kingdom enough to know what has happened in the story thus far, and what’s supposed to happen. While navigating the fantasy perspective adopted by his various crew members in their new characters, the doctor realizes he must find Hemmer to try and find the mysterious “Mercury Stone” and gain control of the Enterprise from whatever is responsible for this playdate.

Yes, Strange New Worlds finally gives Hemmer something to do. We noticed he hadn’t been in the last couple of episodes, but fret not, Hemmer fans: we get plenty of the Aenar in “The Elysian Kingdom.” The engineer relates to the doctor how he felt a “consciousness” brush against him and his telepathic abilities just before things changed on the Enterprise, and reasons the entity that controls the rest of the crew cannot control him because he is telepathic. So, the two men work together to free the ship.

“Contact with it is unpleasant. That’s why I blocked it. I felt as if my brain were being squeezed through my nose.”

“I did that to a man once.”Hemmer and Ortegas’ fantasy persona (Melissa Navia)

The doctor makes a pivotal discovery as they play their parts in the fantasy story: Rukiya is not in the transporter buffer anymore. This isn’t good, as the longer, she is out of containment, the worse her sickness grows. Luckily, Rukiya hinted to her father where she has always wanted to go should she be cured: to her father’s quarters. Sure enough, that’s where Hemmer and M’Benga find her, and here is where this story turns from campy fun to real heart-wrenching emotional storytelling.

Whereas the viewer might expect the chemicals M’Benga ingested to be the cause of this fantasy hallucination, the real puppet master is an innocent and friendly space entity who exists in the nebula, as Hemmer began to theorize earlier in the episode. This entity scanned the Enterprise while the ship was traversing its home and saw Rukiya trapped in the transporter buffer, and immediately related to the lonely girl. With its seemingly omnipotent powers, the entity allowed Rukiya to live out a fantasy tale, complete with the main character—a hero—who she loves and adores: her father.

Despite the reprieve the entity offers Rukiya, Doctor M’Benga knows such a fantasy world can’t last. However, turning off the “play date” doesn’t mean Rukiya must go back to her lonely life jumping in and out of the transporter. The entity can shed Rukiya of her body and take her with it into the cosmos, allowing her to be free of her medical ball and chain and live a full life free of sickness or even death. But, of course, this means the doctor would lose his daughter and lose the major source of happiness in his life. Decisions, decisions.

It actually doesn’t take long for M’Benga to make the right choice: allow his daughter to go with the entity. It’s a sad departure, of course, and any parent watching this episode will surely have their heartstrings tugged.  But what happens next is even more thought-provoking. Within mere moments of Rukiya leaving her father, she reappears as a grown woman. She asserts to her emotional father that she has lived a full life for years and that her father made the right choice in letting her go with the entity she now calls “Deborah,” named after her mother. As you can imagine, the doctor is quite relieved and shaken by this.

On paper, this storyline is as heartbreaking and emotionally devastating as Star Trek comes, right up there with stories like “The Visitor” and “The Inner Light.” But we have to say “The Elysian Kingdom” is held back by what seems like a resistance to letting poignant scenes between father and daughter enough time to breathe. As we mentioned, M’Benga doesn’t take long to make the decision to allow his daughter to live a life without him. Yes, it’s the right choice, but let’s see some emotional turmoil! Let’s see Doctor M’Benga grapple with the momentous decision he is about to make. We could have gone without some fantasy intrigue from earlier in the episode (like the sword fight between fantasy-Ortegas and fantasy-Spock’s forces, since that fight contributes little to moving the story forward) if it meant the last few scenes could play out more. So, as it stands, “The Elysian Kingdom” is within striking distance of the storytelling crowns held by the aforementioned episodes, but not good enough to usurp them.

The fantasy story at play in this episode is forgettable, especially compared to the true parental heart of this episode. Yes, it’s fun seeing the crew as fantasy-based opposites of their actual personalities, like Pike being a cowardly court servant, Spock (Ethan Peck) being a back-stabbing sorcerer, La’an Noonien Singh (Christina Chong) as a toy dog-toting princess, or Nyota Uhura (Celina Rose Gooding) as the fearsome and quick-to-anger villain, but we think these characters will only be remembered as a catalyst for the sadly happy ending for Rukiya and her father.

Anyway, we do like this episode for what it does for Hemmer. The engineer deserved more screentime, especially since what we’ve seen of him thus far has mainly been arrogance and a false sense of superiority. In “The Elysian Kingdom,” he is sympathetic to M’Benga’s struggle to find a cure for his daughter. He displays some light-hearted goofiness when he beams their enemies away from Doctor M’Benga’s quarters. And the engineer even offers to serve as the pivotal communication bridge between the entity and M’Benga even though it causes him great distress. It’s safe to say this episode has nicely illuminated various aspects of Hemmer’s personality, although it’s a shame we waited eight episodes to get a more complete sense of the character.

Taken together, “The Elysian Kingdom” presents a thought-provoking, heartstring-tugging tale about the love that exists between a parent and their child. The fantasy setting in which this story is told, however, is somewhat less endearing and ultimately proves forgettable following the episode’s heartbreaking/heartwarming conclusion. For those keeping count, this episode completes an ongoing plotline that began back in “Ghosts of Illyria,” leaving a select few plotlines left to tackle in this season. We’re excited to see how Sybok will make his proper reappearance, what comes of Pike’s research into his to-be-saved crew members, and if the Gorn still have some surprises in store for the Enterprise crew.