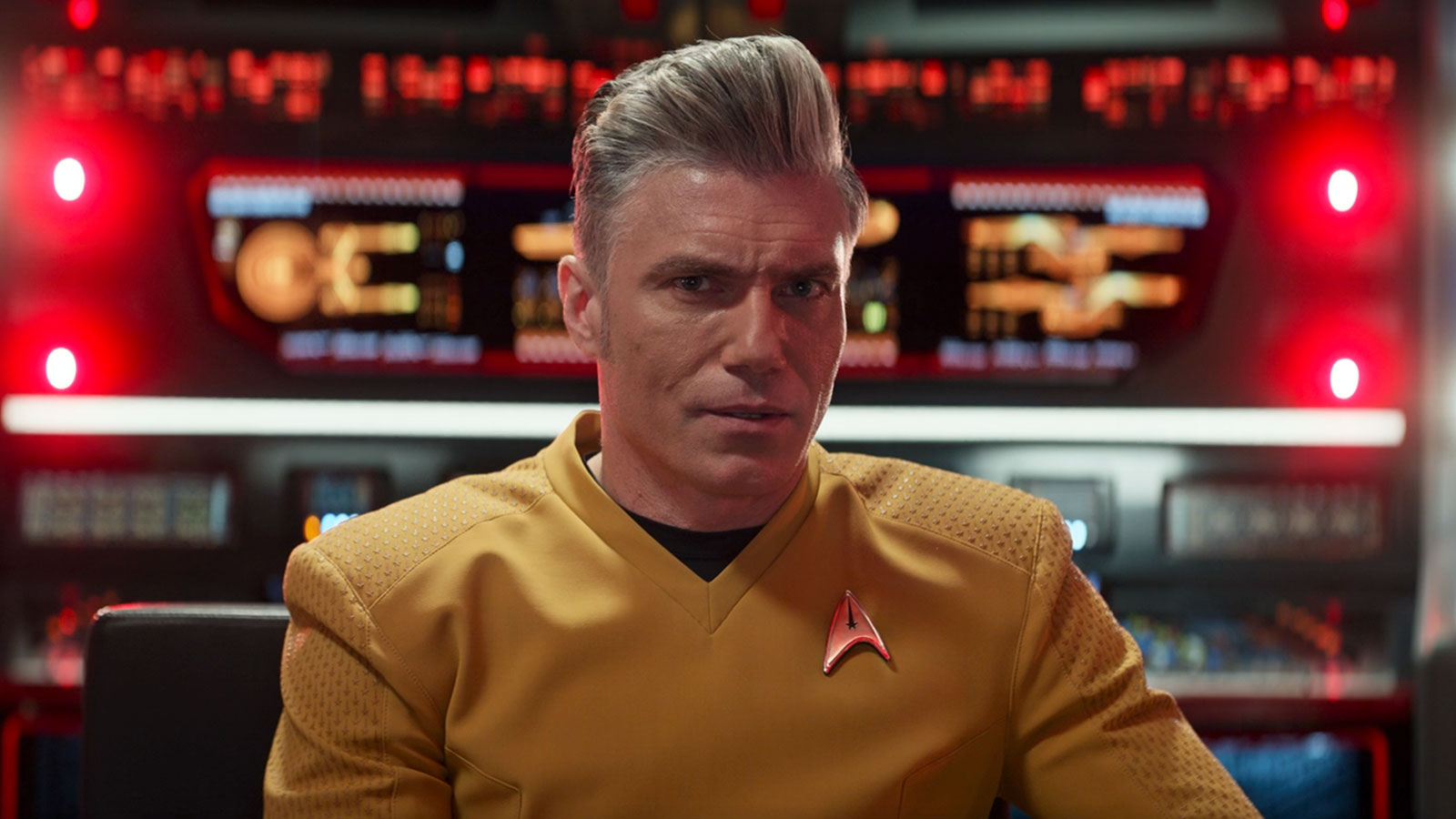 Just as the comical “Spock Amok” was a tonal shift from its intense predecessor “Memento Mori,” “Lift Us Where Suffering Cannot Reach” changes the tone again to one of somber contemplation, as Captain Pike and his crew encounter a society that demands a horrendous sacrifice to keep their civilization in perfect health.

This episode sees Captain Christopher Pike (Anson Mount) and the Enterprise return to a place he knows well: the Majalan System. He was there 10 years prior and apparently had a fling with one of the inhabitants. The captain’s plans for a routine cartographic survey go down the drain, though, when, lo and behold, who does the Enterprise rescue from a nearby shuttle under attack? Alora (Lindy Booth), the same woman Pike encountered all those years ago. Also on the shuttle is an all-important child, the First Servant (Ian Ho), and his father, Elder Gamal (Huse Madhavji). Because the ship attacking the shuttle also attacked the Enterprise, Pike sticks around to investigate the matter.

At first, you might think this episode is a light-hearted affair, with the goofily love-stricken Pike learning more about Alora’s beautiful planet, Majalis, and its shockingly healthy populace. The Enterprise happens to have arrived in time to witness a key moment of the society’s continuing existence: the time when the holy First Servant ascends to the throne. But Pike doesn’t quite know what it means for a child to become First Ascendant, nor is Alora forthcoming with answers. As far as Pike can tell, it’s as if the boy is being celebrated as a deity for becoming a leader, one who was destined at birth to do so. The captain has certainly seen stranger things than this.

Doctor M’Benga (Babs Olusanmokun) and Nurse Chapel (Jess Bush), however, do witness something they have never seen before: quantum implants within the First Servant that tackle any disease or ailment he could suffer. This technology, M’Benga asserts, could mean disease and suffering could be things of the past. So, you can bet M’Benga is interested in this technology, as his terminally sick daughter, Rukiya (Sage Arrindell), may indeed benefit from it.

Things get a bit more complicated as the First Servant is seemingly kidnapped from the Enterprise, and the ease of the kidnapping points the crew to it somehow being an inside job. Deeper questions arise when Cadet Nyota Uhura (Celia Rose Gooding), who is taking a turn at security this episode following her brief tour of engineering in “Memento Mori,” realizes the shuttle attack in the episode’s first act was actually executed by people from Prospect VII, a nearby planet housing offshoots of the Majalan people. Why would his own people, even distant cousins of those on Majalis, kidnap the First Servant? Moreover, this discovery contrasts with what Alora asserted at the beginning of the episode – that she thought the people who attacked the shuttle were members of a nearby alien colony and were likely looking to ransom the child. No wonder Alora was quick to discourage a Starfleet investigation into the attack; things are more complicated than they appear.

“I think my promising young cadet just demonstrated lesson seven of security on you: ‘leave no stone unturned.’ I usually require cadets to look under Mugatan breathing stones for that one.”

It turns out the first attempted kidnapping, and the subsequent kidnapping attempt aboard Enterprise was arranged by Elder Gamal because he wanted to prevent his child from ascending to the throne. Within a few seconds of the audience learning Elder Gamal tried to stop this, Pike chillingly learns firsthand what happens to the First Ascendant when the boy takes the “throne”: the child slowly and painfully deteriorates within the cold clutches of a machine, his life energy sacrificed to unexplainably keep everyone else in perfect health.

Pike is understandably alarmed at people who flourish because of the suffering of a child. It’s at this point one might expect the captain to influentially appeal to Alora and her people to stop this practice or have the Enterprise’s medical and engineering team finds a way to avoid the machine’s need for a child’s energy. No, none of these things happen. Pike is never given the chance to attempt a solution before the First Servant is engulfed, permanently, by the machine.

There is no way Pike can save the First Servant, and indeed he gets knocked out for trying to. Clearly, the Majalans can’t risk their society falling into disarray to save one child. They view the First Servant’s sacrifice as a valuable, noble cause, and that’s why the First Servant is held in such high esteem in their society. As Alora points out to a bewildered Pike, it’s better to have one child be sacrificed for the good of the populace, instead of many children suffering while the rest of the civilization turns its back on them. It’s in this one line that “Lift Us Where Suffering Cannot Reach” neatly illustrates the episode’s allegory: why do the people of Earth oftentimes ignore the fact that children across the world are suffering – or if not ignore, then at least stop themselves from doing anything about it on a large scale?

The cost to Pike personally of leaving Alora and her people to their own devices is greater than anybody else. Of course, the captain is living with the knowledge he is going to all but dies in an accident seven years in the future, which he exposits to Alora in this episode. The Majalan people, with their miraculous biological technology, could offer Pike a chance to remedy himself following his accident, but he would have to be a member of their civilization – but even then, it turns out the moral cost of such technology is too great for the captain to bear. It’s extra unfortunate, then, that the Enterprise’s crew didn’t figure out a way to rid the Majalans of their dependency on the soul-sucking machine; the captain’s future could be saved otherwise. Can you imagine the fortitude it takes for Pike to make the decision to sacrifice a chance to save his life, just because he morally disagrees with how Alora’s people make their perfect world possible?

Having Pike unable to save the First Servant is more of a gut punch because we see the youngster be an extremely intelligent, friendly, and innocent boy. For example, he (albeit improbably) discovers young Rukiya in the sickbay transporter buffer and plays some trippy hopscotch with her, just as any kid would enjoy doing. He also impresses Spock (Ethan Peck) with his knowledge of subspace signal propagation, and innocently claims he is interested in such technology because he thought it would be cool to “have a friend across the galaxy.” Seeing such potential wasted only compounds his unfortunate sacrifice, no matter how useful that sacrifice is.

There is a slightly happy ending for one person, though: Doctor M’Benga. Via Elder Gamal, the doctor takes the first step in medically solving his daughter’s terminal diagnosis. What Gamal provides him is a far cry from a cure, however, because it’s illegal for him to share their technology with unaffiliated races – just as Alora related to Pike – so we totally expect little Rukiya to show up again at some point when a more concrete cure is found. Although we’re somewhat surprised Doctor M’Benga didn’t push harder for Gamal to provide more tangible help; the doctor seems content to take whatever Gamal gives him, even though he is still far from finding a cure for his daughter.

So, “Lift Us Where Suffering Cannot Reach” leaves us with an ending that makes us shrink in our chairs a little. For those who are new to Star Trek, this is what it’s like to have the show hold a mirror to our reality, a trend the franchise patented when The Original Series subtly commented on the Vietnam War, the racial justice movement in the 1960s, and any other number of topics. There’s no happy ending in this episode. There’s no happy ending regarding child suffering in real life.  Pike and his crew conclude this entry simply with the knowledge there are some places in the universe that practice prosperity in different ways and at different costs – and this show asks us to consider if the cost is too great. That’s a recipe for a good Star Trek episode if there ever was one.