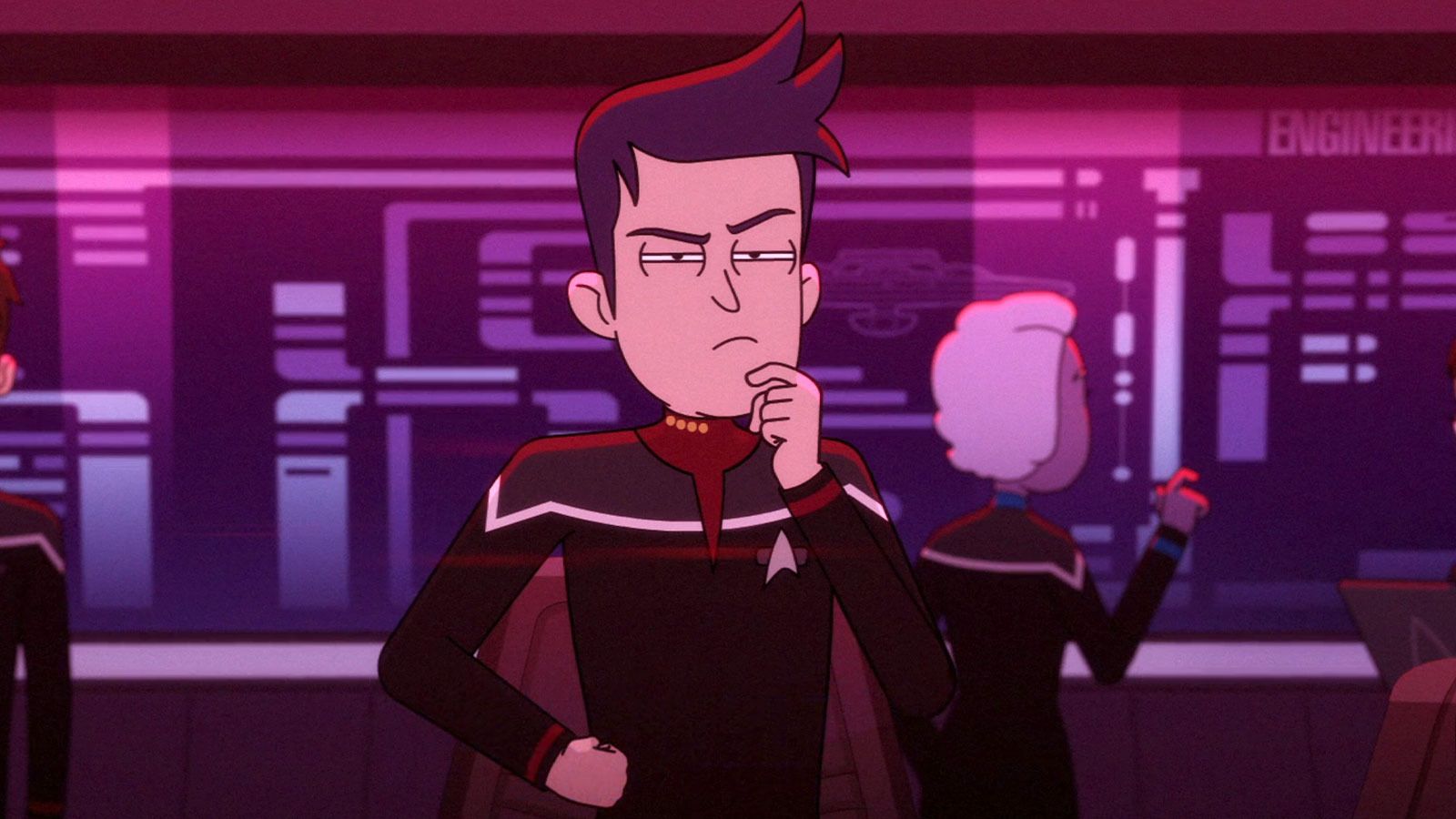 Following up on the excellent season one episode “Crisis Point” is no mean feat, but “Crisis Point 2: Paradoxus” somehow brings the goods in an episode that parodies any number of Star Trek movies, while spotlighting the heart and soul that makes this show standout from its peers.

The audience gets thrown right into the action as the episode’s opening set piece sees our ensigns on the holodeck playing out a cinematic adventure. The Cerritos is under attack from a Romulan warbird, and in flys Captain Dagger, as played by Brad Boimler (Jack Quaid) to save the day. Despite the last-minute save, the Romulans were successful in capturing a new type of technology, a Chronogami, so the Cerritos and Dagger’s ship, the Sovereign-class USS Wayfarer, set off in pursuit.

It’s all fun and games until Boimler gets pulled out of the holodeck by Commander Jack Ransom (Jerry O’Connell), and when he returns Brad is notably dourer and sucked out of the adventure. Unlike Boimler, the audience is sure to have a lot of fun as Lower Decks pays tribute to any number of Star Trek movies (a full listing of these references will be in the Stray Thoughts section at the end of the review). Whereas “normal” Lower Decks episodes mostly draw from the innumerable material of the Star Trek TV shows, it’s quite the fun tradition the show has set up for itself with its movie-orientated Crisis Point episodes.

“What, does it make an alternate, cinematic timeline that runs concurrent with our own but with different people playing younger versions of us?”

“[Laughs] Scientifically, that would be a bit of a reach.” – Mariner and Tendi talking about the Chronogami.

It’s only when Ensign Beckett Mariner (Tawney Newsome) takes a break from the holo-movie for a scheduled evaluation in Ransom’s office that she learns why Boimler is so down: it appears Brad’s clone, William, who was serving on the Titan, died in a freak accident. (Although why Ransom can tell her that and not break any privacy laws is anybody’s guess.) Talking to Boimler back in the holodeck, the grieving ensign admits his twin’s meaningless death has thrown him for a loop; what is the meaning of life, how do you make sense of pointless deaths, and how can you be happy when everybody is destined to die no matter what?

This is some serious emotional turmoil Boimler experiences, and that explains why he has been going off script (much to his co-stars’ chagrin) by using the holo-movie’s adaptive learning to help him find an answer to these questions. Clearly, it’s a mark of desperation that Boimler is searching for answers in the holodeck – and Mariner knows a bit about using the holodeck for therapy, as that was what she was using “Crisis Point” for in that season one episode.

Boimler’s quest to find some emotional peace after the hard news about his twin speaks to the lengths Lower Decks is willing to go to hit the audience right in the gut. If it isn’t clear by now, this show isn’t afraid to travel outside the tonal confines of a normal animated comedy. It can ask the hard questions and try to answer them, much in the same way any number of its live-action Star Trek brethren can. In that respect, Lower Decks proves (if there was any doubt) that it can hold itself up with the best science fiction has to offer by exploring the human condition in such a mature way.

Does Boimler actually find answers in the holodeck? Kind of. Near the end of the episode, Boimler, in the throes of desperation, tries to access a message hidden inside a rock monster he thinks might hold the secret to his pain, but it ultimately doesn’t and he loses his mind with rage and blacks out. It’s within the depths of his subconscious that he finds a measure of peace. In a setting straight out of Star Trek: Generations, Boimler runs across Captain Hikaru Sulu, peacefully minding James Kirk’s old Nexus hangout. And yes, Sulu here is voiced by George Takei, who reprises his famous role from The Original Series and its associated movies.

Having Sulu live on Kirk’s farm is a curious choice by this show’s producers. The fact that we first see Kirk’s name on the farm’s mailbox made us think we were about to see and hear the captain himself. Why would Sulu be minding Kirk’s farm, even in Boimler’s imagination? We get that Boimler’s terrible news in the holodeck mimics what happened to Jean-Luc Picard in Star Trek: Generations (and this episode is, after all, a thorough raise-of-the-glass to Star Trek movies), so having Boimler’s story end in a Nexus-esque environment makes sense on that level. But how many people are going to think they are about to see Kirk and instead are happier they see Sulu?

“The randomness of death is only a reflection of the unexpected joys we find in life.”

“So, if I spend my life worrying about a meaningless death, I’ll never find joy?”

“I literally just said that.” – Captain Sulu (in Boimler’s mind) and Boimler.

The important thing for Boimler, though, is that he gets some comforting words from someone he considers a hero, and it’s enough to pull him out of his grief and help him enjoy life again. It’s a happy ending, somewhat, for Boimler, but William’s fate is actually a little darker than we knew. The last scene of this episode shows the clone waking up from his apparent death onboard a Defiant-class ship, and he is recruited into Section 31, the shadowy Federation organization featured first in Deep Space Nine and later in Star Trek: Discovery. This is quite the intriguing hook, and who knows when we’ll get more insight into what William is doing for Section 31.

Besides Boimler and Mariner’s exploration of the former’s pain, Tendi (Noel Wells) and Rutherford (Eugene Cordero) have their own adventure in the holo-movie. Playing through the story initially created by Boimler, Tendi starts to get really frustrated at Rutherford for not taking the holo-story seriously. Little did he know that Tendi was actually playing out her own fantasy of being a captain one day, something she herself has never dared voice. Understanding that she seeks this role one day is a major revelation for her and Rutherford, and Rutherford, of course, is totally supportive of the idea. Having captaincy be Tendi’s ambition makes sense, considering a few episodes ago she entered senior officer science training, although how long it will take for her to get to the center chair remains to be seen.

Taken together, “Crisis Point 2: Paradoxus” is perhaps the standout episode of this season thus far, as it tackles a mature, thought-provoking theme that surely resonates with anyone who watches. Its none-too-subtle winks to various Star Trek movies is a great way to break up the season (not that leaning into television-orientated Star Trek is getting old). We imagine it could have taken forever to iron out a script that juggles numerous easter eggs and a soul-retching story, so kudos to writer Ben Rodgers. With two episodes left in the season, Lower Decks sure has set a high bar for itself; bring on the final episodes! 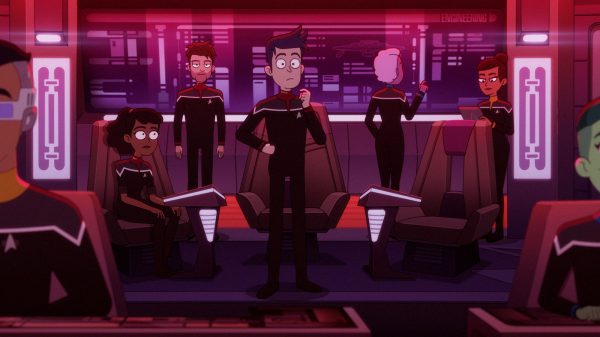