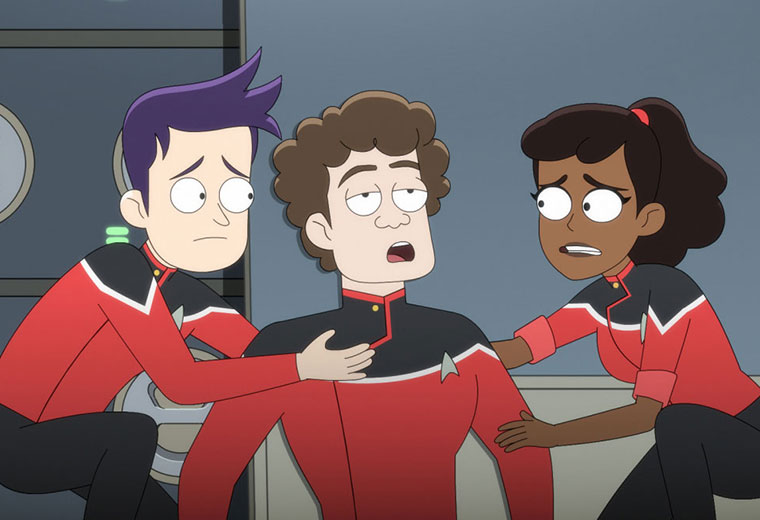 In an excellent entry of Lower Decks, “Terminal Provocations” gives us a slightly different take on the typical Star Trek trope of holodeck troubles, while the U.S.S. Cerritos tries to secure old Starfleet debris from bellicose alien salvagers.

We’ll start with the holodeck storyline, as such malfunctions are common among Star Trek, and it was only a matter of time before Lower Decks had its turn. As expected, this take on holodeck woes is turned more comical, but just as deadly as usual. Surprisingly, this jaunt through the holodeck actually ends up being a great character moment for one of our heroes. After learning Tendi (Noel Wells) never completed space walk training, which will be required to help catalogue the newly discovered Starfleet debris, Rutherford (Eugene Cordero) introduces her to a work-in-progress training program, complete with a seemingly helpful walking and talking Starfleet badge named, naturally, Badgey (guest star Jack McBrayer). But due to the holodeck malfunction and incomplete programming, the sweet, helpful Badgey turns destructive, and thanks to deactivated holodeck safety protocols (of course), the two ensigns try to survive Badgey’s homicidal onslaught.

Now that we are outside the confines of live-action, we see the holodock used here more diversely than what other Star Trek would be capable of. Tendi and Rutherford start off in space, then transition to a Bajoran marketplace, and finally a snow-capped mountain as they try and escape Badgey. But that’s just the top-level result of this storyline. More substantially, the impression that Rutherford is a heartwarming decent and kind man is reinforced thanks to his efforts to help (and impress) Tendi. We aren’t convinced that his intentions are solely romantic, though. A sense of innocent platonic friendship seems more his style, and Tendi likewise innocent enough to take Rutherford’s actions as such. The only evidence to the contrary is the quick moment when Tendi and Rutherford accidentally magnetize their boots together, leaving them nose-to-nose for a few moments, but even that passes without much romantic tension. We’d be perfectly fine with their relationship remains platonic.

Meanwhile, Mariner (Tawny Newsome) and Boimler (Jack Quaid) struggle to contain another destructive piece of technology – a raging mass of Starfleet equipment onboard the Cerritos, created thanks to the laziness of Fletcher (guest star Tim Robinson), a fellow lower-decker. Mariner proves to be the star of this storyline, as her character is expanded just a bit more; in addition to being an ensign who follows her own rules and bucks Starfleet norms whenever it suits her, she indeed symbolizes two typical Starfleet characteristics: learn from your mistakes, and always have your friends’ backs. Luckily, Mariner and Boimler are able to send the raging mass into space, where it actually stops the alien ship from attacking the Cerritos without the Starfleet ship ever firing a shot.

On the bridge, Captain Freeman (Dawnn Lewis) and her senior officers spend the episode holding out hope for a peaceful solution in their confrontation with the challenging aliens. She chants multiple times that Starfleet is responsible for finding peaceful solutions to seemingly impossible problems; she shouts at one point, “these guys are lucky I’m so ethical and considerate!” Despite some of the more edgy or shadowy characteristics of some of the Cerritos‘ bridge crew (a welcome creative choice meant to portray these officers through the lens of the lower-deckers), it’s nice to see Freeman stick so closely to Federation ideals, despite the constant barrage of alien attacks.

Ultimately, “Terminal Provocations” combines its own take on a tried-and-true Star Trek plot with a stellar guest cast in this week’s installment, all while telling a story that adds some depth to our main heroes. If this is the quality of the back half of season one, then it’s no surprise this show was quickly renewed for a second season.

New episodes of Star Trek: Lower Decks are released on Thursdays on CBS All Access in the U.S. The series returns next week (September 17th) with the seventh episode “Much Ado About Boimler.”