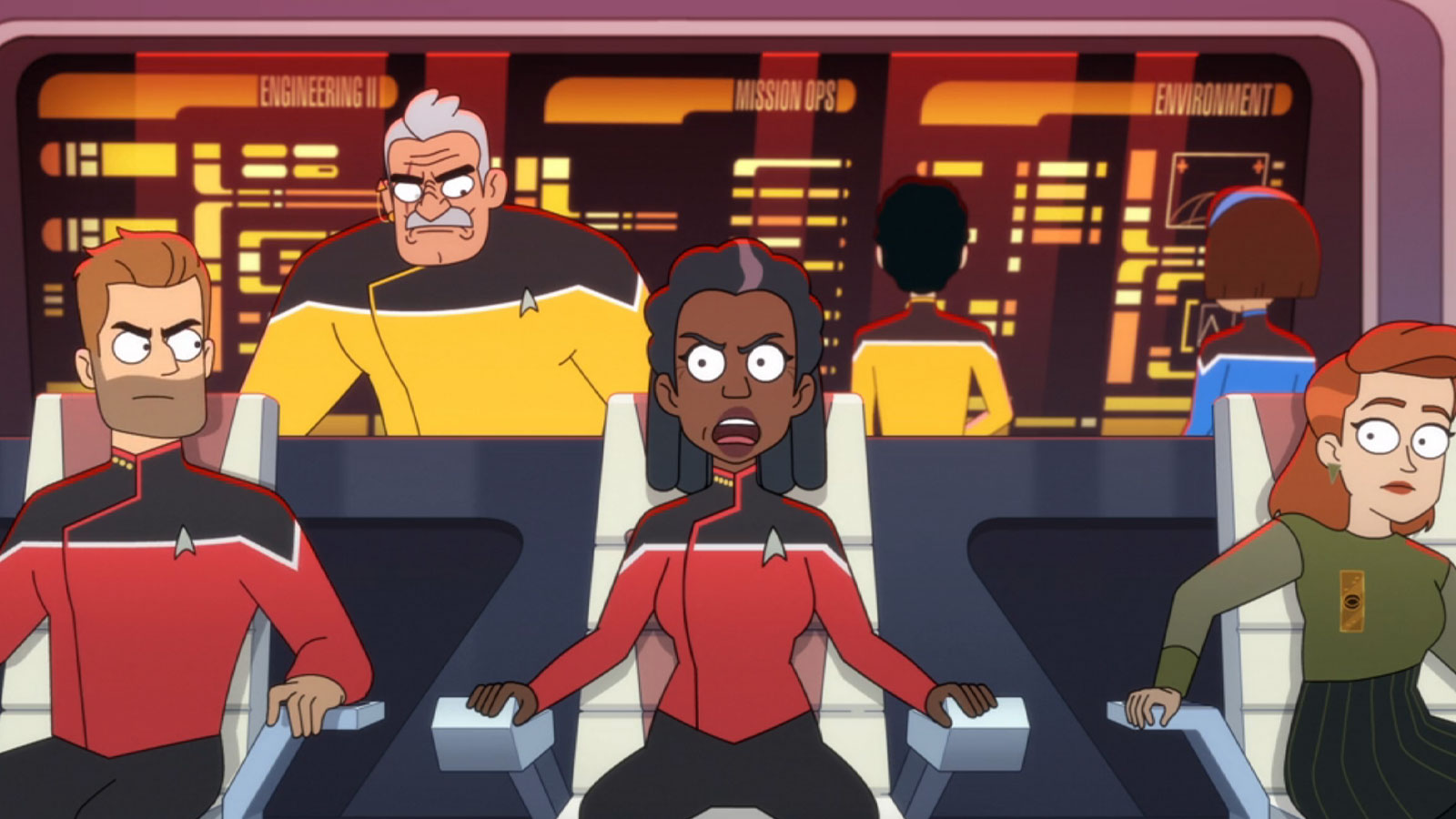 In the season’s penultimate episode, the Cerritos sees a major shake-up as a journalist comes on board to document a new initiative by Captain Freeman, and it all leads to an existential threat to the Cerritos and her crew.

The episode begins with Captain Carol Freeman (Dawnn Lewis) launching a new initiative for the Cerritos and the California-class ships in general. Whereas the general mission of the class is second contact, Freeman wants to up their game and start prominently helping worlds that need it after the Federation makes first contact. She calls this Project Swing By, and she wants to try it out first on a planet Star Trek: The Next Generation fans will be familiar with: Ornara, as featured in the TNG episode “Symbiosis.”

But there’s a catch that makes Freeman hate her own mission before it even begins: the arrival of a Federation News Network journalist, Victoria Nuze (Alison Becker). Freeman doesn’t think the Cerritos is up for having a journalist onboard, so the captain quickly cleans up her crew’s craziness and moves around duty assignments, much to Ensign Beckett Mariner’s (Tawney Newsome), Brad Boimler’s (Jack Quaid), Sam Rutherford’s (Eugene Cordero), and D’Vana Tendi’s (Noel Wells) chagrin. Freeman goes out of her way to make sure Mariner and her friends aren’t around the journalist, going so far as to cancel a much-anticipated pie-eating contest, barring them from the crew lounge, and generally demoralizing the lower deckers by making them feel insignificant and bothersome.

Victoria goes around and captures the crew’s perspective on what it’s like serving on the Cerritos. Freeman is careful to not allow her daughter anywhere near Victoria, as Mariner is sure to overshare the crew’s various quirks, mishaps, and general craziness. This understandably frustrates Mariner, and she gets to the point where she visits Victoria anyway and explains what it’s like aboard the ship – but Mariner’s perspective might not be what you think.

Arriving at Ornara, and with Victoria recording everything she sees, Captain Freeman and her senior officers beam down to the surface, only to find the planet prospering and not in need of Federation support. It’s a welcome turnaround for a society that was hooked on drugs years before, but it’s a bad first start to Project Swing By. Facing humiliation in front of a journalist, Freeman, in consultation with Admiral Les Buenamigo (Carlos Alazraqui) – the man who initially assigned Victoria to the Cerritos – decides to visit the nearby planet, Brekka. Perhaps Project Swing By is still salvageable.

“There is no mission! The Ornarans don’t need us.”

“That can’t be right. Make them show you their government, just in case it’s secretly run by kids or somebody pretending to be the devil.”

– Captain Freeman and Admiral Buenamigo, an exchange that references both TOS‘ “Miri” and TNG’s “Devil’s Due.”

After talking with Mariner, Victoria confronts the captain about the Cerritos’ various misadventures, and the captain assumes this information must have been leaked by Mariner. Thrown into a rage the likes of which we haven’t seen before, the captain sure does have a punishment in store for her daughter.

Mariner faces the music in the captain’s ready room, where Freeman actually kicks Mariner off the ship and over to Starbase 80, the infamous posting this show has referenced a few times as being a complete hellhole. Mariner is taken aback by the punishment and vaguely asserts she didn’t say or do anything wrong to Victoria, but Freeman doesn’t buy it. Mariner is soon whisked off the ship, ostensibly permanently, much to her comrades’ chagrin.

Landing on Brekka presents the Cerritos senior officers with an unusual sight: a deserted city. Deserted, that is, until the Breen, an enemy well-known from Deep Space Nine, pops out of nowhere and starts attacking. The senior officers only barely make it back to their ship before the Breen launch a no-mercy assault on the Cerritos. What follows is a pretty awesome space engagement that sees the meager Cali-class go toe-to-toe with three Breen attack vessels. The Cerritos doesn’t last very long in the fight, though, and all seems lost until a surprise Federation starship comes in and completely obliterates the Breen attack force.

At this point, the audience is surely expecting some cameo or friendly face onboard the newly arrived Federation ship. Not this time. Instead, the newcomer is a brand-new Texas-class ship, the USS Aledo and it’s completely autonomous. There’s no one on board, and it’s instead controlled by the faraway Admiral Buenamigo. This certainly grabs Victoria’s attention, and, momentarily at least, distracts her from Project Swing By. As Ransom notes to Freeman, however, Project Swing By was a success in that it revealed a Breen incursion on Brekka. That must be worth something.

Sometime later, the FNN’s report about the Cerritos runs, and it is not flattering of the captain or her crew. But who is it who told Victoria unflattering stories about the ship? Every interviewee besides Mariner. All Mariner asserted to the journalist was how awesome the Cerritos is because of Captain Freeman. This is an emotional revelation and speaks to Mariner’s character arc: when we first met her, she hated serving under her mother, but now she was the only one to go to bat for her, and Freeman unintentionally punished her for it.

What does Mariner do now that she is off the Cerritos? While trying to contact her daughter following the explosive FNN report, Freeman learns Mariner resigned her Starfleet commission and isn’t stationed on Starbase 80 anymore. Unbeknownst to Freeman, her daughter apparently took Petra Aberdeen (Georgia King), the roguish archaeologist from “Reflections,” up on her offer and is now working with her. What hijinks the two will get in before the season ends is anyone’s guess.

As the penultimate episode of the season, we were expecting this episode to set up stakes for what the crew would have to face in the finale, and on that note “Trusted Sources” does this well enough. How will Mariner ultimately end up back on the Cerritos, which she surely must, and what will the fallout be from Admiral Buenamigo’s new line of ships? What will this mean for Freeman’s drive to prove the California-class ships’ worth? And on a separate note, can we expect to see the conclusion or further movement on Rutherford’s implant storyline, considering that a major plot thread hasn’t been touched since “Reflections”? We look forward to seeing if Lower Decks can tackle these questions as it tries to finish off this incredible season.