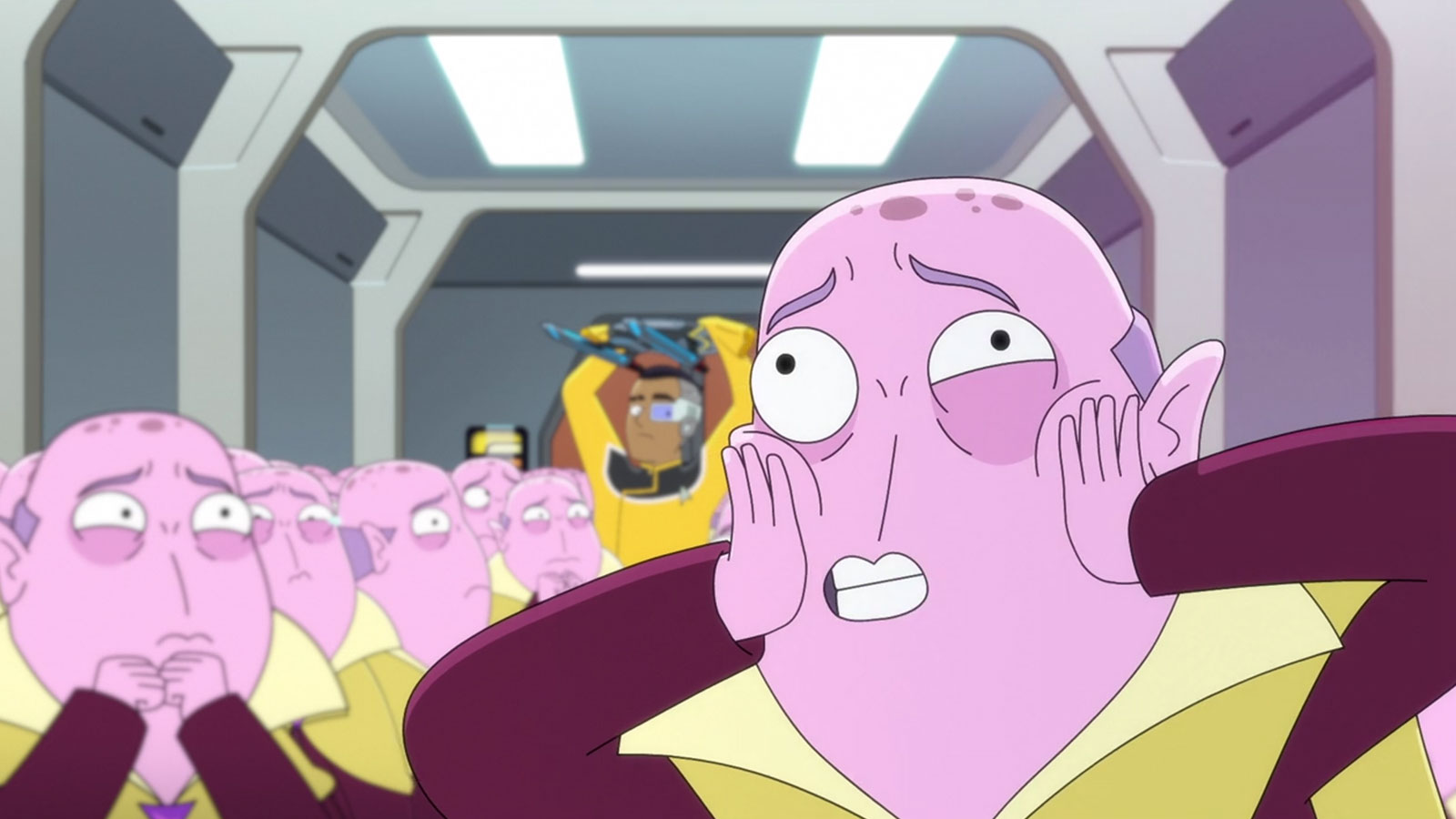 We’ll get right to it: “An Embarrassment of Dooplers” is a fantastic all-around entry in Lower Decks‘ season two and it’s specifically a terrific character showcase for Boimler (Jack Quaid) and Mariner (Tawney Newsome).

The Cerritos is tasked with escorting a Doopler emissary to Federation Starbase 25 for trade negotiations, normally an easy task save for the fact that Dooplers can, well, duplicate when emotionally compromised. (Not only is this a hilarious thing to witness, but this duplicating ability is a great example of animation offering something live-action shows cannot. How expensive and time-consuming would it be for a live-action show to showcase an alien that multiplies so quickly?)

Captain Freeman (Dawnn Lewis) is looking forward to getting to Starbase 25 to attend the Command Conference afterparty, an elite, high-energy shindig where the best who’s-who of Starfleet attend. Freeman is psyched to be the only California-class captain there, an invite she obtained thanks to her and her ship’s efforts battling the Pakleds.

Mariner wants to go to the party, too, and uses a convenient loophole to get an invite: William, Boimler’s transporter twin from “Kayshon, His Eyes Open,” would automatically get a party invite thanks to the Titan being a more important vessel than the Cerritos. Mariner plans to have Boimler pose as his transporter clone, and she is his plus one. The two proceed to the party, even as the Cerritos gets overrun by a rapidly duplicating Doopler.

On the station, the pair try to find the party’s location via a shady figure from Mariner’s past, Malvus. In return for the party’s location, he tasks the ensigns with transporting precious cargo across the station. Naturally, things aren’t quite on the up-and-up, and the duo ends up fleeing from station police. This chase sequence is one of the most visually interesting parts of any Lower Decks episode thus far, and kudos to the production team for pulling off a high-intensity and environmentally diverse romp through the station.

More importantly than any chase sequence or afterparty, the way this episode explores Boimler and Mariner’s relationship is what makes this a truly outstanding episode. First, the pair fight about how Boimler points out Mariner’s character flaws, such as how she abandoned him on a couple of missions, just like she supposedly abandoned Malvus. Then the argument turns to Boimler abandoning Mariner when he went to serve on the Titan, something Mariner’s been holding against him since he left. Finally, the angry pair part ways after Mariner is denied entry in the afterparty, but they missing his friend, Boimler meets up with Mariner in a nearby bar where they reconcile their differences and affirm their friendship. The pair realize that they are each other’s Number Ones, in a completely platonic way. It’s a touching moment when the ensigns etch their names into the bar next to another pair of platonic friends: Kirk and Spock.

Meanwhile, Rutherford (Eugene Cordero) and Tendi (Noël Wells) are working on building a model of the Cerritos, something Rutherford started before he lost his memory at the end of the last season. In “An Embarrassment of Dooplers,” he finds that he isn’t quite succeeding, as he can’t figure out certain clues he left himself to help complete the model. In the midst of the Doopler explosion on the ship, Rutherford faces the fact that he seemingly can’t measure up to his old self – until Tendi helps him realize they never wanted to finish the model, as working on it was a way for people to leave them alone.

Our first thought here was that Rutherford and Tendi don’t seem to be two people who we think would want to purposefully get people to leave them alone (remember how much Tendi tried to get O’Connor to like her in “Moist Vessel“?), but considering some of the other ways Rutherford and Tendi have tried to spend time together, we think the constant model-building is another appropriate way that the two are trying to develop their friendship.

Clearly, “An Embarrassment of Dooplers” is a Star Trek episode all about friendship, especially Boimler and Mariner’s, which the show considers on par with two legendary Star Trek characters. Now that ill feelings are aired between the two ensigns, we’re curious to see how and if their reforged friendship evolves over the rest of the season.

Lower Decks returns next week with the sixth episode of season two on Thursday, September 16th.