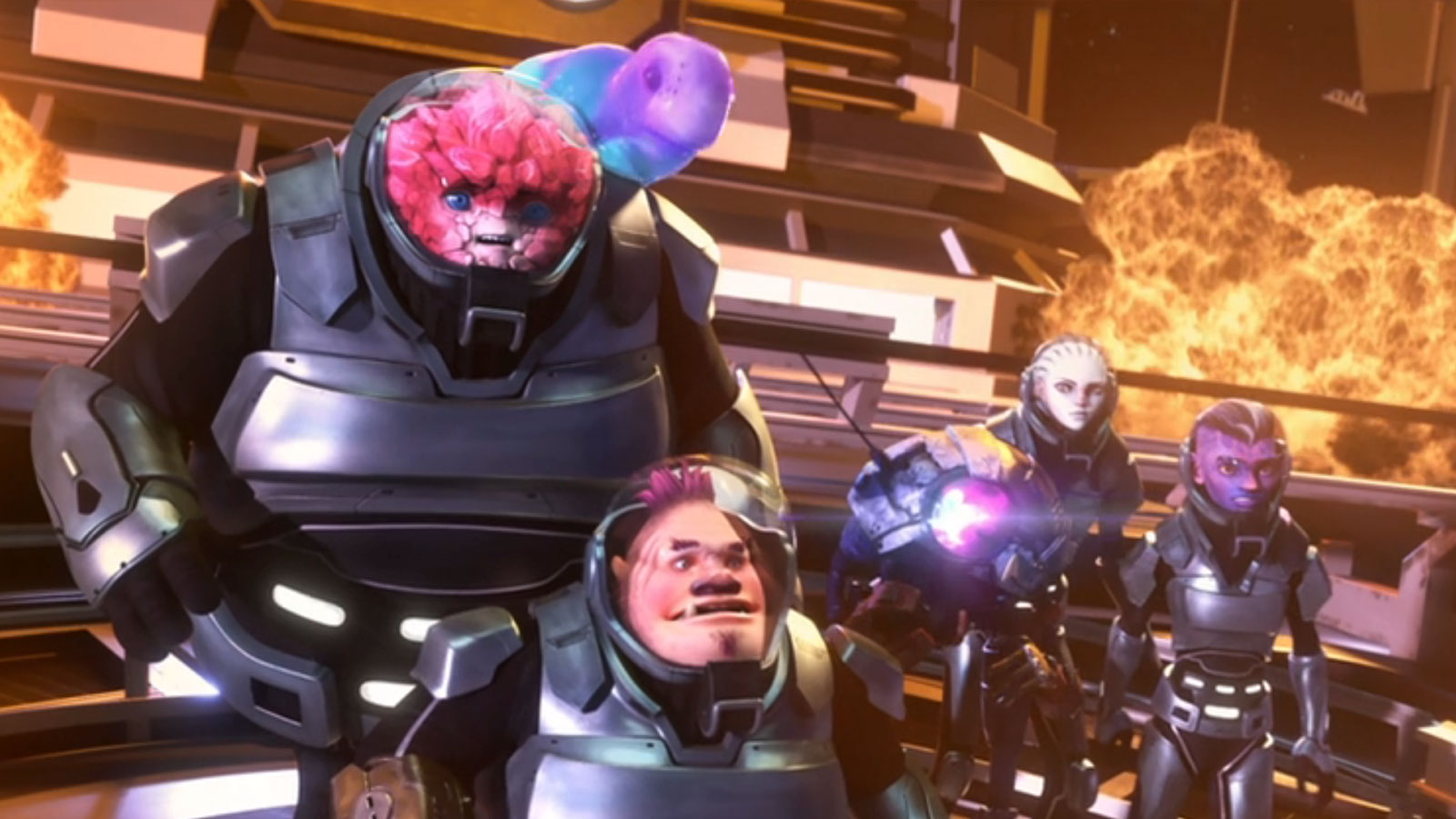 The most-gorgeous animated series out there returns for the second half of its first season, and “Asylym” adds some intriguing mystery to the show’s main throughline.

Our crew, fresh from rescuing the slaves of Tars Lamora, are aiming for Federation space aboard their stolen Federation starship. Thus, the crew opts to complete some goodwill missions first before facing the Federation. So, “Asylum” drops us straight into one of these missions, as the crew, including Captain Dal (Brett Gray), Gwyn (Ella Purnell), Jankom Pog (Jason Mantzoukas), Zero (Angus Imrie), and Rok-Tahk (Rylee Alazraqui), try to rescue an endangered whale animal on a watery world. From the opening minutes of this sequence, which gives us some Star Trek: Into Darkness vibes, Prodigy reminds us what an incredible eye for art direction and animation this show’s creators have.

After this mission, the Protostar heads to a Federation station, CR-721, with the intention of turning themselves over and hoping even to join the organization. The sole caretaker of this station, Barniss Frex (Eric Bauza), is surprised to see such a motley gang but begins to process them into the Federation database nonetheless. As part of this processing, we learn that Dal’s species, unknown to everyone including himself, is actually of prime interest to the Federation, as he is directed to report to Starfleet Command straightaway for reasons unknown.

When Frex attempts to connect his station to the Protostar, this is where things get wonky. True to Gwyn’s vague memory of her father telling her the Protostar is a deadly weapon, the ship infects the station with some sort of virus, leading the station to start destroying itself. The crew, without an escape pod, thanks to the fast-acting Frex, are left with only the smarts of Rok-Tahk, the crew’s novice science officer, to save them. Luckily, she is up to the task.

Using her ever-growing array of science knowledge, Rok can calculate, at least closely enough, the math needed to ensure the crew can jump from the spiraling station to the orbiting Protostar. Thanks to a last-minute tractor beam assist from Hologram Janeway (Kate Mulgrew), the crew arrive safely back on the Protostar. Not all is resolved, though, as Gwyn has finally unearthed all her memories of her father and what he was planning. She asserts to the crew that she now remembers “everything,” although what exactly that means will have to wait until next week.

Otherwise, this episode introduces Robert Beltran reprising his Voyager character, Chakotay, a long-awaited moment ever since it was announced a year ago he was joining the cast. In “Asylum,” we see the real flesh-and-blood Janeway reliving a holodeck memory of her seeing Chakotay off as he embarks on the newly commissioned Protostar bound for the Delta Quadrant. Why Chakotay was going back to that area of space is unknown, although we do know he was comforted with having a hologram version of Janeway along for the ride. Before the episode ends, we see Janeway and her crew track the Protostar to its last known location, Tars Lamora, and they find an unconscious Diviner (John Noble), although what they do with him is for another day.

“They’re going to see right through me.”

“Let them. Because that’s how you show them who you are truly are.”

“Sometimes the hardest thing is to take a leap of faith.”

– Dal and Janeway about the crew’s imminent arrival at a Starfleet outpost.

We’re happy to say the “lesson of the week” motif this show seems to aim for is alive and well, as this week Hologram Janeway wisely asserts to Dal that it’s okay to take a leap of faith sometimes, the wisdom he uses to help his crew off the ill-fated CR-721. On the topic of teaching kids, remember this show is meant to introduce younger fans to the franchise; indeed, our heroes learning more about the Federation and its ideals reflects some of the audience learning about Star Trek for the first time. On this note, Frex is keen to espouse the grandness of “the final frontier,” an idealistic facet of the franchise older fans may be taking for granted at this point, but for newcomers is a galaxy of possibilities.

So, it’s a quick-moving but thoughtful adventure the Protostar crew experiences this week, and it leaves us with a few key questions moving forward: what makes Dal’s species so special, and why would Starfleet Command want to prioritize them? What has Gwyn remembered about the Protostar that makes it such a threat to the Federation? We basically see the ship is keyed to disrupt any Federation station or ship it connects with but is that all to the story? How does Chakotay play a role in all of this, and when will the real Janeway catch up with the Protostar? That’s a lot to think about for what’s marketed as a “kids’ show,” which leaves us with a recurring thought about Prodigy: if you aren’t watching this because it’s aiming for a younger demographic, you are missing out.