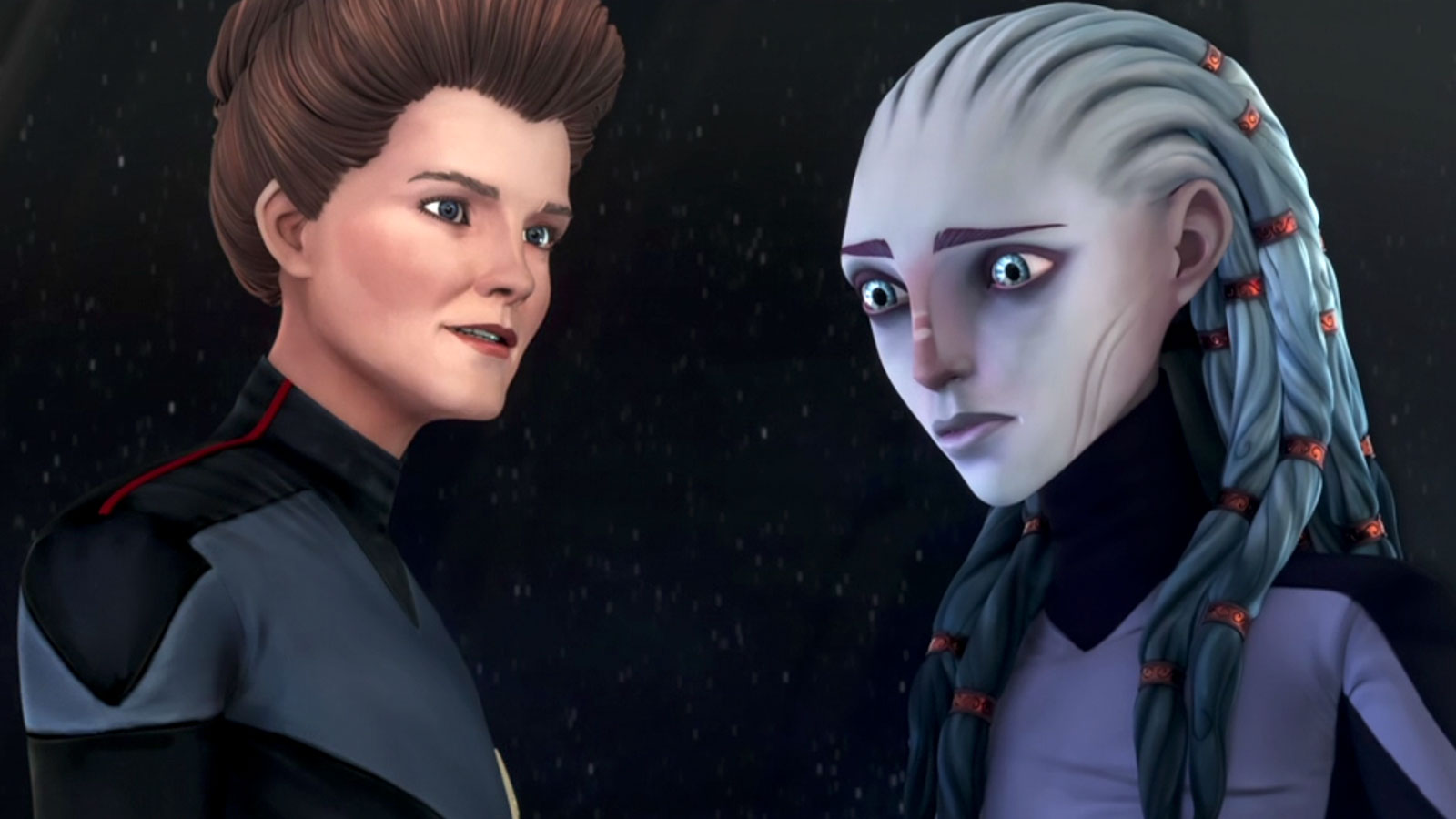 Star Trek: Prodigy‘s “A Moral Star, Part II” has all the trappings of a season finale: some of our young heroes come full circle from when we first met them, some antagonists are defeated, and we’re left with a hook that is perfectly suitable for a season finale. Plus, we don’t know exactly when the next episodes of Prodigy will be.

In the first half of this two-parter, the Protostar crew sans Gwyn (Ella Purnell) are trying to rescue the Unwanted aboard Tars Lamora as The Diviner (John Noble) makes off with the Protostar and, presumably, its all-important proto-core. But thanks to the clever machinations of Dal (Brett Gray) and company, the proto-core has stayed with the crew, leaving the angry Diviner to double back to the mining colony to finally get what he needs.

In the series premiere, we were introduced to the idea that the miners on Tars Lamora were all different alien species who spoke different languages, leading them to live a sad, solitary life as they chipped away at the asteroid. However, the arrival of Dal and his crew’s universal translators within their combadges means these aliens now have a way to communicate with each other, leading them to form alliances to help wrestle control of the asteroid away from their former master. Seeing these creatures, including the fan-favorite Caitian child, gain their newfound freedom and discover the ability to communicate with one another is a joy to behold. This scene speaks to the episode’s lesson of the week for its young audience: you can overcome problems by communicating and working together.

One of the most rewarding scenes in this episode (which is certainly saying something) is during the crew’s attempt to gain control of the asteroid. Jankom (Jason Mantzoukas), the person who is supposed to tackle any engineering problem thrown his way, stands slack-jawed at Tars Lamora’s power generator as he tries to figure out how to fix it. This leaves Rok-Tahk (Rylee Alazraqui), the crew member who heretofore has been typecast as the bulky security officer, much to her chagrin, to remedy the problem herself, undoubtedly using some of that engineering knowledge she gained during her long time in time dilation. In a way, this scene is Rok coming full circle from the journey she began when she first joined the Protostar crew; she has discarded preconceived notions of what role she is supposed to fill, and she is much happier for it. Moreover, her crew members respect her abilities and her wish to forge her own character. Staying true to yourself, as Rok has done this season, is certainly a great lesson to impart on children.

Now, this is the second time in this review that we’ve mentioned this show’s main audience, children, but let’s be clear: this show was selling itself short when it was marketing itself as a kid’s show. Every aspect of Prodigy can be enjoyed by adults just as much as children. The show’s stellar art direction and animation are unrivaled by most animated shows; its themes of resiliency, communication, and collaboration are applicable throughout adulthood, not just childhood; and its cast and the plotlines are charming, intriguing, and thought-provoking. “A Moral Star, Part II” is a fantastic case study of this argument. This is all to say that we have good news: kids who watch this show today and fall in love with Star Trek will be able to return to Prodigy years down the road and appreciate it in a whole new way. Prodigy is planting the seeds for the next generation of Star Trek fans, and we should appreciate that as it’s happening.

Anyway, The Diviner does indeed return to Tars Lamora, but he has a new problem: the hologram Janeway (Kate Mulgrew) he thought he commanded was actually just a ruse. As part of the plan the crew hatched to rescue the Unwanted, they prepared for the possibility that The Diviner tries to command the Protostar‘s steward. In a last-ditch attempt to rescue his plan, The Diviner tries to show Gwyn why he is so desperate for the ship, and why he hates the Federation so much.

Yes, we finally get answers to these long-standing questions. In the future, the Federation apparently visited The Diviner’s homeworld, Solum, and initiated first contact, but the Vau N’Akat did not respond well to this event and plunged into a civil war between those who supported the Federation and those who sought to preserve the Vau N’Akat way of life. As he explains to Gwyn on the holodeck, The Diviner went back in time and came across the Protostar before this disastrous first content event and planted a virus in the ship that would spread to other Federation ships as soon as the Protostar came into contact with them. He wants revenge on the Federation and wants to use their own ship to do this.

Gwyn absorbs all of this, but she still doesn’t ally herself with her father, believing that he can’t “trade one tragedy for another.” Dal, arriving on the holodeck just in time, tries to stop The Diviner but fails quickly, leaving Zero (Angus Imrie) to also arrive just in time to save the day. Zero, always angry that The Diviner used it to inflict pain on others, totally unleashes itself from its enclosure and exposes The Diviner to the true form of Medusans.

Ever since The Original Series‘ “Is There in Truth No Beauty” aired in 1968, we’ve known about the mysterious Medusan form, but “A Moral Star, Part II” is the first time we see this form truly unleashed. By exposing itself (with surprisingly little regard for Dal and Gwyn, who are also caught in its storm), Zero shows just how mad it is with The Diviner. The Diviner catches full sight of the Medusan and indeed suffers major mental trauma, leaving him a babbling, incoherent mess.

Dal and Gwyn have the sense to look away from Zero as this chaos is unleashed, but Gwyn accidentally catches the reflection of Zero’s maelstrom in Dal’s combadge, and this small exposure is enough to damage Gwyn’s memory of her conversation with her father about how he planned to use the Protostar as a weapon against the Federation. So, despite ending the threat posed by The Diviner, freeing the miners, and retaining control of the Protostar, there’s a lingering problem hanging over our crew that they don’t even know about: if they encounter Federation ships, which they plan to do, The Diviner’s plan may still very well succeed.

And there is a Federation ship heading for the Protostar. In the last seconds of this episode, we see a Federation ship, commanded by flesh-and-blood Admiral Janeway, pick up the proto-core’s signature. Janeway orders her ship to set a course for the Protostar, and she thinks she is coming to save Chakotay. It’s quite the tease for the coming episodes of Prodigy at some point this year!

Ten episodes in, there are few things to critique about Star Trek: Prodigy. On the whole, this show blew away our expectations, and this season one mid-season finale only drives home this show’s strengths, including intriguing plotlines, charming characterization, gorgeous visuals, and skillfully placed hooks that keep the viewer interested in what comes next. Interestingly, it seems like the two villains of this show – The Diviner and Drednok (Jimmi Simpson) – have made their exits, but it sure would be strange if they lasted only 10 episodes. Perhaps they will be back through some evil machinations, or perhaps this show will get a new villain. And there’s still plenty of mystery why Chakotay was commanding the Protostar during its encounter with Drednok, and what Janeway will do once she reaches the Protostar. The wait will be excruciating!