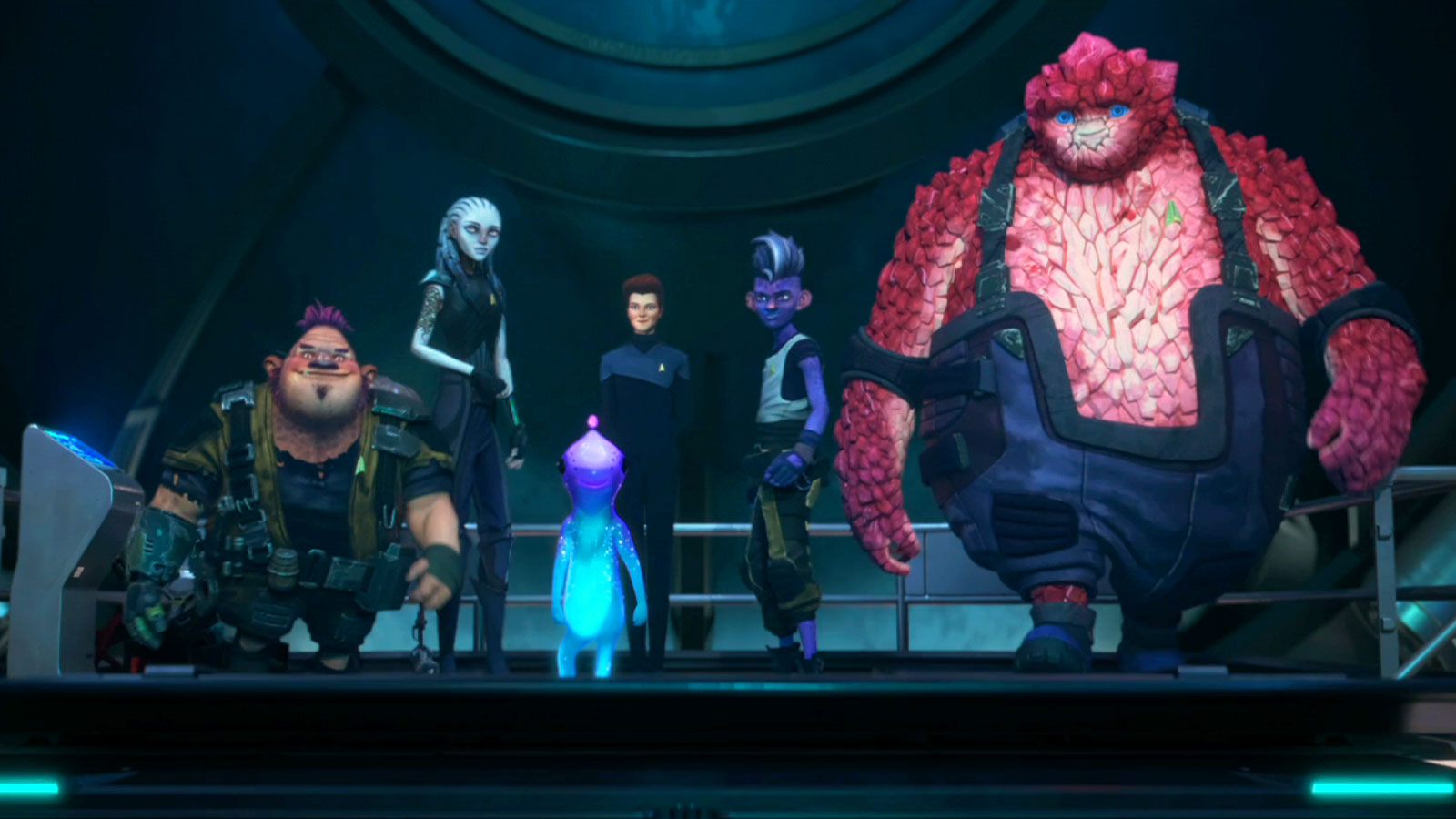 Star Trek: Prodigy divides its sixteenth episode into two distinct sections: one that explains some of our crew’s backstories, in short, easily digestible snippets, and another one that majorly develops the surprising and highly anticipated Dauntless plot from last week.

The Protostar needs repairs after the events of “Masquerades,” so the crew works together to fix various systems, giving them a chance to learn more about each other. We know Dal was engineered in a lab someplace by members of Arik Soong’s Children, and Gwyn was at her father’s side on Tars Lamora, but what about everyone else?

The first soliloquy comes from Rok-Tahk (Rylee Alazraqui), who describes her situation at their former slave labor home.  She was an imposing fighter called “The Monster” who “fought” a local hero, an event that always entertained audiences. We say “fought,” because Rok actually became friends with this hero, even though they didn’t speak the same language, and their fights were always just for show. But, this was the genesis of Rok’s aversion to being profiled as a fighter due to her size. She didn’t like fighting, even if there wasn’t any blood involved, and soon enough she tossed aside the fake combat with the hero and tried a more comical routine where she played the hero.  Unsurprisingly, this change didn’t stick well with her audience, so she landed in the labor camp where we first met her.

Next up is Zero (Angus Imrie), the Medusan who wasn’t always confined to their protective suit. Once upon a time, Zero and their other kin were free-roamers, aiming to explore the galaxy in lives of wonderment, discovery, and autonomy. But the Kazon found their little family and captured Zero, and they ultimately landed at the foot of the Diviner and Gwyn, something for which Gwyn is quick to apologize.

“You’d expect being a noble Tellarite Jankom would have a royal upbringing. But… it was a royal pain.”

Jankom, as he begins his origin story.

Finally, Jankom Pog (Jason Mantzoukas) gets the most entertaining backstory. An orphan who was enlisted on a deep-space mission, we see him woken up unexpectedly on the Tellar sleeper ship he previously eluded to in “Dream Catcher.” The only one awake, Pog is tasked by the ship’s robotic helper to repair numerous systems. We certainly chuckled heartedly at learning why Jankom always talks about himself in the third person, and we also get a first-hand look at why Pog is so fond of “percussive maintenance.” At the end of his story, we learn the young Tellarite left the sleeper ship (only to soon be captured by a Kazon ship) so the rest of the crew could survive their journey. This is a touching self-sacrifice that really does lend itself to establishing that Pog is proper Tellarite royalty, at least at heart.

Taken together, these backstories help illustrate how and why our characters are the way they are. We appreciated the insight, and the fact that these stories are presented in shorter snippets, rather than, say, full episodes devoted to each character. But to be honest, we were surprised to see Prodigy pay any attention to other stories at all considering the twist presented to audiences at the end of last week’s episode. But that’s certainly not to say this show forgot about the revelations onboard the Dauntless.

Deposited in between our heroes’ stories is the continuation of what Ensign Asencia (Jameela Jamil) started; namely, that she revealed herself to The Diviner (John Noble) as a fellow member of the Vau N’Akat, with a Drednok (Jimmi Simpson) paired at her side. Asencia is quick to exposit a host of answers we’ve been pondering for quite some time. Let’s break it down.

Solum, the homeworld of The Diviner, was experiencing a ruinous civil war following the Federation’s First Contact, and the Federation refused to take sides. We knew this. But thanks to Asencia, we know during the decades-long destruction that the Protostar, captained by Chakotay (Robert Beltran), accidentally appeared in orbit above the planet thanks to a time travel wormhole.  Believing the Protostar’s appearance is a chance at retribution against the Federation, the Vau N’Akat captured the ship, held the crew hostage, and weaponized the Protostar with their last Living Construct.

Before The Diviner and Asencia (who reveals her true name is The Vindicator) could launch the ship, Chakotay sent the unmanned vessel back through the wormhole. This left The Order – a newly-formed group of Vau N’Akat including The Diviner, The Vindicator, and numerous others with their respective Drednoks – to follow through the wormhole after it. This means Chakotay’s last known position is on Solum in the future, although what happens to him and his crew is not elaborated on at this time. The Vindicator, meanwhile, exited the temporal wormhole in the Alpha Quadrant three years ago. And because the Diviner had so much longer to search unsuccessfully for the Protostar (he arrived from the future 20 years ago), it makes more sense why he created Gwyn, his progeny, to ensure the search for the Protostar continued.

It’s a lot to digest, but it does answer several questions we had since the beginning of the show about The Diviner’s motivations. What we found somewhat odd was that this vital part of season one’s story is revealed amongst the character-building snippets in the other plotline. Prodigy almost seems to sabotage its own momentum by not full-throatily spotlighting the incredible events surrounding the Protostar arriving at Solum, or the reveal that Asencia is not a Starfleet officer. That being said, this episode remains notable for how much storytelling it packs into 24 minutes. “Preludes” runs the gamut between comedy and tragedy, which is surely no easy feat for a show that needs to keep its younger core audience in mind.

Before the episode ends, Vice Admiral Janeway (Kate Mulgrew) learns the names and faces of the Protostar crew thanks to seeing the bounty The Diviner issued early in season one. Recognizing a similarity between him and Gwyn, Janeway thinks to ask their guest about the kids. But when she goes to talk to him, The Diviner knocks her out before Janeway can do anything about the sudden appearance of Drednok or The Vindicator on her ship. How will the vice admiral get out of this one?

Despite the speedy advancements in the season’s overarching arc, there is still much more to anticipate. The Dauntless crew will surely be in a bit of a bind when their captain goes AWOL, especially since the Federation ship still can’t cross the Neutral Zone and capture the Protostar. Plus, let’s consider some new questions. How and why did the Protostar enter a time travel wormhole that deposited it at Solum during their civil war? How will The Diviner, Drednok, and The Vindicator pursue the Protostar, and will they need to capture the Dauntless to do so?

As for our young heroes, they will apparently start the next episode where they left the previous one, as all they did in “Prelude” was expound on their backstories. But you know the saying: you don’t know where you’re going until you know where you’ve been.