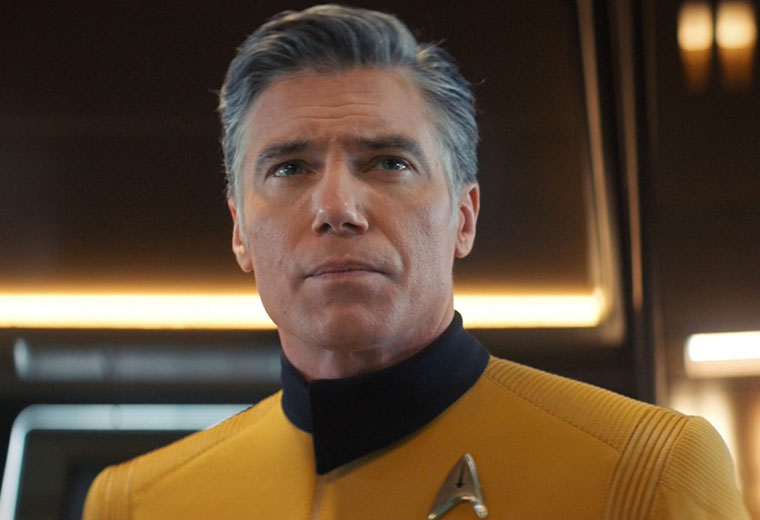 From the moment Anson Mount, Rebecca Romijn and Ethan Peck landed on Star Trek: Discovery, viewers have been clamoring for a spin-off focusing on the adventures of the pre-Original Series Enterprise crew. The audience’s demand for the show began on social media comments, amid confessions of crushes on Anson Mount. Then came the bearded Spock “controversy” that had its moment before being eclipsed by worldwide love for Ethan Peck’s portrayal of the half-human/half-Vulcan officer. We all had a feeling (something Spock would disapprove of, probably) that the farewell we saw between him and his sister at the end of the second season of Discovery was not the last time we’d see him.

Then came the Short Treks featuring the crew right as an online petition demanding a spin-off show with this cast gained serious traction, and with every subsequent castmember interview whole-heartedly endorsing a spin-off, the warp dial kept spinning up, getting us closer and closer to the show.

Recommended reading: our review of “Ask Not,” which predicted the Short Treks episode being an undercover new character mini-episode of the upcoming series.

All this has led to the announcement of Star Trek: Strange New Worlds, bringing great joy and cheer. There will be fan speculation, wild theories, endless deconstructions of every little detail of every scene featuring this crew, but for now: here are five things that we would love to see in Strange New Worlds.

Part of the old world charm of TOS and to a certain extent, TNG, was the extensive use of practical effects. In today’s television landscape shooting a sci-fi series on a green screen makes the most economic sense but the tsunami of digital backgrounds that have taken over our TV has come at a cost: an abandonment of practical effects. What better a show to welcome back the power of practical effects to the forefront than the successor of a show that, using cardboard doors and styrofoam rocks, inspired people to go to space? There’s a humility and, dare I say it, a magic in knowing that Nomad, for all its unmatchable intelligence, was a simple cylindrical setup with a voice box. Even though we visited a different world, do we not profoundly remember the humble flute most of all from “The Inner Light”? Discovery and Picard have made every starry background and interstellar vista look like a million bucks, but if Strange New Worlds aims to be truly original and different, a reduction in the use of green screens and an emphasis on smaller sets and real environments would be a great place to start.

4. Not going where we’ve been before

J.J. Abrams’ “Kelvin Timeline” was a reimagining of aspects of The Original Series. Discovery features Original Series characters heavily. Picard continued the story of the TNG’s Enterprise-D Captain. All of these have been greatly enjoyable but the criticism of reliance on already existing characters and tropes is justified. Strange New Worlds stands at a unique juncture in the space-time Trek Continuum. Standing on a ground mostly unexplored we hope that the stories it tells end the cycle of dependence on what has come before. We’re fully aware that at the show’s center is the franchise’s most recognizable character but, for inspiration on telling new stories with him, Discovery’s second season handling of Spock as dyslexic and mentally burdened is a great example. We know very little about Number One and Pike and the world they inhabit. If the show aggressively stuck to keeping the trio as the only tether to already told stories and forces themselves, and us, to head out into unseen directions, then the creators have already begun earning the moniker of strange and new.

3. A return to all-ages-friendly Star Trek

We live in a television universe where darkness seems to reign supreme. Discovery and Picard have both committed to telling stories about mature, complex, adult themes. That makes the shows necessary and watchable but the hunger for a “WHERE’S MY OPTIMISM IN TREK?” grows with each passing day. When Pike stood on the bridge of the USS Discovery and declared that he was not Lorca, that was not only a welcome change for the crew, it was the turn to a path of hope and light for the show. Strange New Worlds can take this to a whole new level by telling stories that regularly fuel hope and family-friendly brightness back into the Star Trek universe. Since Pike was able to do it effortlessly in the second season of Discovery, Strange New Worlds should place this burden of telling stories that forgo gore and cussing for all-ages inclusive storytelling on the broad and sturdy shoulders of Anson Mount and his crew.

2. A persistent and irredeemable villain

The Original Series introduced the Romulans. The Next Generation gave us the Borg. Deep Space Nine terrified us with Cardassians. Every great Star Trek series has introduced an evil so great and horrible, that just the thought of them becoming a reality makes one shudder. It wasn’t the way Romulans looked that made them terrifying, it was the metaphor of Cold War era Soviet Union and the unease they brought to our heroes that made them so formidable. In spite of the instantly iconic look of the Borg, we remember them so starkly because they came at a time when mankind’s growing connection to technology seemed unstoppable. Their “Resistance is futile” war cry served—and continues to serve—as a strong warning. Strange New Worlds should focus on building a new villain – in the form of a civilization, a species, a single unit – that would make these previous iterations’ villains proud. One that not only would look great and horrifying, but also becomes an antagonist that serves as a strong metaphor for where we are in the world today and what our greatest threats are.

The roots of TOS and TNG lie deeply in the world of early-to-mid 20th century pulp fiction magazine short stories. Tales that are intriguing, exciting, and brief windows into enchanting worlds. The power of season-based storytelling clearly has great strengths as proven by Discovery, Picard and most current television series. The entire appeal of binge-worthy shows is owed to the episodes’ cliffhanger nature that keeps us hooked. A return to episodic storytelling puts Strange New Worlds in an interesting position.

First, by telling focused, compact stories through single episodes it relieves viewers of the pressure to have seen every episode of the show prior to the new one. It makes onboarding a show easy.

Secondly, with episodic storytelling, SNW will go back to the roots of Star Trek. Most TOS and TNG episodes were designed to be great short stories that play out on our screens. By bringing back episodic storytelling Strange New Worlds might lose viewers that come for the binge but what it has to gain is far greater: the seemingly unattainable and profound power of standalone episodes that have changed television like “The City on The Edge of Forever,” “Let That Be Your Last Battlefield,” “The Visitor,” etc.

What do you hope to see in Star Trek: Strange New Worlds? Tell us in the comments below.