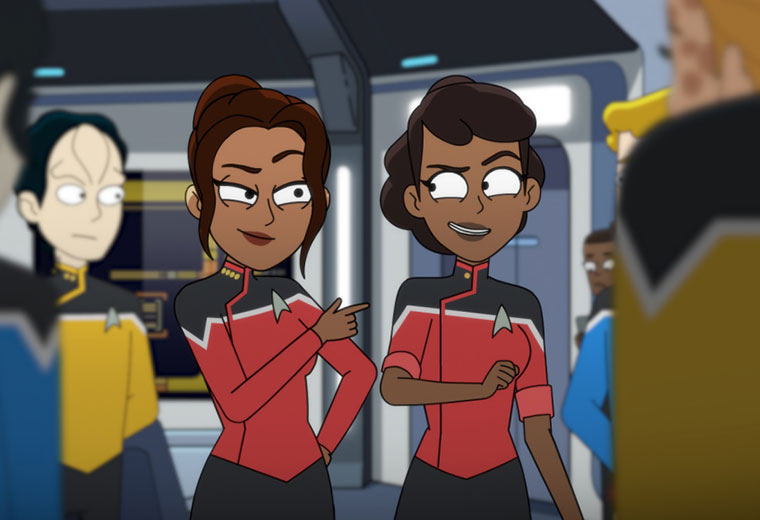 “Much Ado About Boimler,” a twist on the William Shakespeare play “Much Ado About Nothing,” sees Mr. Starfleet himself sent to The Farm, while the Cerritos’ resident rebellious ensign tackles her new responsibility as temporary First Officer under a friendly acting captain.

While we often see the chain of command in action on important Starfleet ships, such as the First Officer taking command while the captain is away, the Second Officer replacing the First Officer, etc., in this Lower Decks episode we see what happens when a less-experienced crew needs to replace their command staff. A substitute command crew journeys to the Cerritos while the regular command staff is away on a secret mission, and who is the new acting captain? One of Mariner’s friends, of course.

First off, the way Lower Decks makes fun of undercover Starfleet missions is hilarious. Dressed in garb seen in The Next Generation, three of the Cerritos‘ bridge officers are tasked with liaising with an agricultural colony, with the possible result of… planting seeds. Captain Freeman (Dawnn Lewis), Commander Ransom (Jerry O’Connell), and Lieutenant Shax (Fred Tatasciore) are, after all, experts in the germination of seeds. A meaningless mission, to be sure, yet Captain Freeman and her team take the matter uber-seriously. Again, Lower Decks‘ penchant for making fun of Star Trek isn’t getting old anytime soon.

Meanwhile, Boimler (Jack Quaid) gets phase-shifted thanks to a wonky transporter Rutherford (Eugene Cordero) was working on, leading the ensign to remain a glowing blue ghost for the foreseeable future. In case you ever wondered where the victims of science or medical experiments go, Lower Decks has your answer: The Farm. It’s accessible only via transport on a cool new Starfleet ship, the Osler, governed by the shadowy Division 14, a group that deals with unsolvable space mysteries. Boimler is joined by Tendi (Noel Wells), who recently created a hilariously disturbing genetically altered dog aptly named “The Dog” (voiced by Jennifer Hale), on the journey to the Farm. While onboard the transport vessel, they meet several other victims who believe the Farm doesn’t exist, and that they are stranded on the Osler. It’s in this island-of-misfit-toys passenger roster that Lower Decks makes some neat references to previous Star Trek shows, like the person confined to a wheelchair like Captain Pike, or the victim who was turned into a slug, like the infamous Voyager episode ‘Threshold.” Fans of Star Trek: The Animated Series will also notice that the commander of the Osler, known only as the “Division 14 Medical Specialist,” is an Edosian, the same race as Arex from that show.

In the end, like the episode’s title eludes to, the shadowy, villainous portrayal of the Medical Specialist and Division 14 turns out to be a bunch of nothing, as it’s simply a lack of communication and openness that creates this image. The Farm, in reality, is a real place where people go to get legitimate help. In this way, “Much Ado About Boimler” offers a quintessential Star Trek lesson: communication promotes understanding. Callbacks and themes aside, we appreciate that this plot also provides a welcome break from the typical ensign pairings of Boimler/Mariner and Tendi/Rutherford, which we’ve noted happens a little too frequently this season. Here, we see Tendi and Boimler interact more than ever, and we hope Lower Decks keeps up the diversity.

Mariner (Tawny Newsome), meanwhile, needs to come to grips with the fact she is now taking orders from her old academy friend-turned-captain, Amina Ramsey (Toks Olagundoye), a task she does not care to put any effort into despite her initial excitement at seeing the higher ranking officer. Mariner was hoping to simply serve with a friend, instead of a by-the-book Starfleet officer, an attitude that is completely in line with what we know about Mariner’s rebellious stance toward Starfleet. While Amina remembers Mariner as the best “boots on the ground” officer, Mariner’s performance as her first officer is sorely lacking, and it’s all because she is afraid of using her true skills to advance her career. It’s only when their lives are threatened via an alien that Mariner’s abilities shine through. Despite an offer to go with Amina back to the Oakland, Mariner chooses to remain a lower-decker and not advance through the ranks. This inability to take the next step in a career is reminiscent of Riker never choosing to leave the Enterprise-D and pursue his own captaincy – although for Riker it was due to a sense of loyalty to his ship and crew, while Mariner claims she still needs time to learn more about herself and her path in life.

While there weren’t so many laugh-out-loud moments in this episode as opposed to other entries, “Much Ado About Boimler” serves as a great example of how Lower Decks can stick to Star Trek‘s root of promoting progressive themes – such as the importance of communication and self-care – while still poking fun at the storied franchise. That’s the recipe for a great episode if we ever heard one.

New episodes of Star Trek: Lower Decks are released on Thursdays on CBS All Access in the U.S. The series returns next week (September 24th) with the eighth episode “Veritas.”