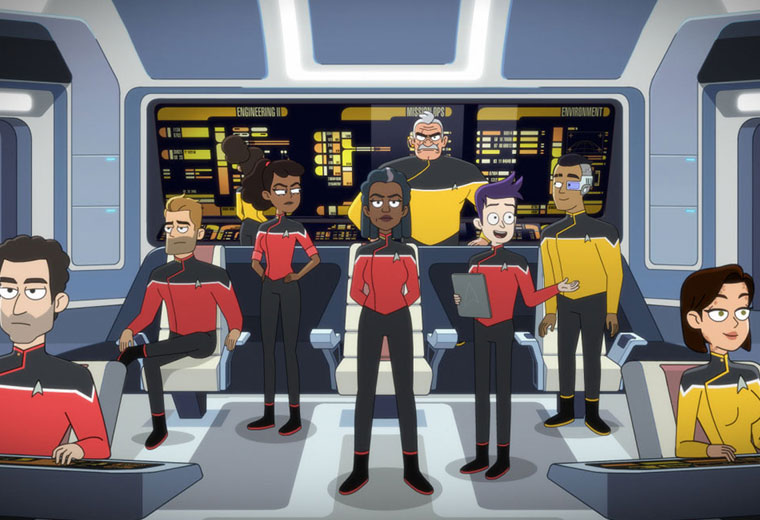 Lower Decks heads for the big screen (…kind of)

Lower Decks’ season one penultimate episode delivers a strong showing for three important reasons. It shows just how creative animation can be, while delving into a novel type of parody, all while anchoring the episode in exploring the motivations and psyche of one of our main characters. That’s a recipe for success if we’ve ever heard one.

“Crisis Point” takes its name from the holodeck program that Mariner (Tawny Newsome) creates to help cope with her overbearing mother/captain. When traditional shipboard therapy doesn’t work, as would be the case on, say, the Enterprise-D, Mariner decides to help cope with her stress by creating a holodeck program that portrays her various crewmates as parts in a movie, where Mariner is the bad guy fighting her mother. The neat twist on this program: it plays out and looks like a movie, complete with letterbox formatting, film defects, and hilarious callbacks to various Star Trek movies.

Targeting Star Trek movies for parody within a cinematic holodeck program is an unexpected surprise, made possible only by the unique flexibility bestowed by animation. And the Lower Decks writing team smartly picked various visual callbacks across the classic and newer Star Trek movies. Indulgent tour of the Cerritos by the crew on a shuttle, a la The Motion Picture? Check. Lens flares blinding the audience in every scene, a la the J.J. Abrams movies? Check. The list goes on, and once again the writing staff flexes their Star Trek knowledge in a way only hardcore fans will appreciate.

On a deeper level, this episode is clearly a Mariner story, and is just another part of the mother/daughter arc that was first identified in the series pilot. The writers certainly practice the “show, don’t tell” writing method in “Crisis Point,” as we see firsthand how deeply rooted Mariner’s distain for her mother goes. Casting herself as the villain trying to literally kill her mother, even if it’s in a holodeck program, is sinister, and points to a deeper struggle that we haven’t been privy to outside the surface-level angst. It’s only when Mariner confronts the holodeck version of herself, created via her own personal log entries, that the real Mariner has a change of heart. She realizes she likes working on the Cerritos despite her overbearing mother and lame ensign duties. In this way, her extreme form of therapy does work – just not in the way she expected.

The other lower-deckers serve as support roles for this decidedly Mariner-centric episode. Boimler (Jack Quaid) originally creates the holodeck program to help prepare for an interview with Captain Freeman (Dawnn Lewis), which gives Mariner the idea to turn the holodeck into her own cinematic therapy. The ever-lovable Tendi (Noël Wells) is one of Mariner’s henchman, cast by Mariner originally as a stereotypical Orion slaver, but in typical Star Trek fashion, Tendi discards the stereotype in favor of her true-to-life personality. Rutherford (Eugene Cordero) meanwhile uses the holodeck as an excuse to finally say to his boss what he has always wanted to say – which, in typical Rutherford fashion isn’t anything bad. Quite the opposite. But make no mistake – while these little distractions are entertaining enough, the real meat of this episode comes from Mariner’s evolving relationship with her mother.

Lower Decks sets itself up for an interesting finale next week, as Boimler learns that Freeman is actually Mariner’s mother, a secret both women have hidden from the rest of the crew. It’ll be interesting how Boimler’s discovery impacts his relationship with Mariner, and how the other lower-deckers take the news.

New episodes of Star Trek: Lower Decks are released on Thursdays on CBS All Access in the U.S. The series returns next week (October 8) with the final episode of its first season.